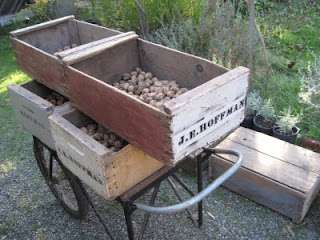 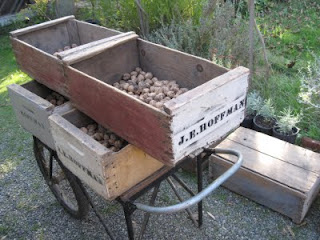 ut wine? For a change of pace and an escape from city bustle, Hoffman Farm is just the place for your next Sunday trip. I found out about this place looking to pick walnuts. I knew it was about the end of the season and walnuts are not a particularly popular u-pick item in the Bay Area. There were orchards in Vacaville/Brentwood but this one in Napa promised to be something special.

This 23-acre farm is maintained by John and Margaret Hoffman, respectively 93 and 90 years old. Visiting the farm is like visiting your grand-parents’ orchard, only this one features 3 kinds of walnuts, 3 kinds of prunes, 3 kind 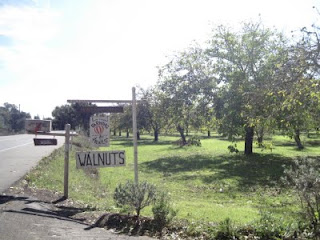 As I arrived at the farm, I parked the car and looked around. With nobody in sight, I simply made my way into the orchard. I wasn’t sure how many walnuts would be left on the ground though. When I called the previous Saturday, Mr. Hoffman warned me that the storm has badly sha 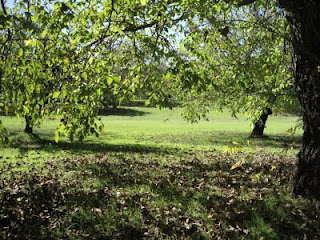 ken the trees and that many walnuts had fallen. I was set with low expectations and a big wicker basket – because you never know. At first, my non-expert eyes tricked me. I’d never picked walnuts off the tree before. “These are old apples,” I explained to my girls, pointing at several trees with shriveled black fruits dangling off the branches, except … the ones on the ground were particularly hard and round under my shoe. I bent over, peeled a slimy black skin off, and a walnut appeared. I blinked and took a second good look 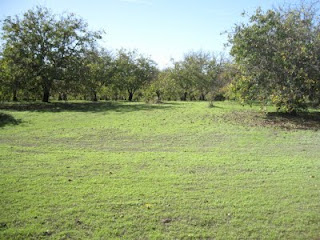 around. All the trees around us were walnut trees. “Bring the basket girls!” I said.

Thus began our walnutty afternoon. We couldn’t resist picking up the nuts and filling the basket, slowly making our way through the trees. Soon our hands and nails got pretty black. Walnut husks are a common natural dye and if you want to give it a try, here is how to proceed. Knees in the damp dirt, I kept peeling off husks and my girls got in the game too, comparing walnut sizes. We got to the edge of a clearing and standing there, I got the full measure of the orch 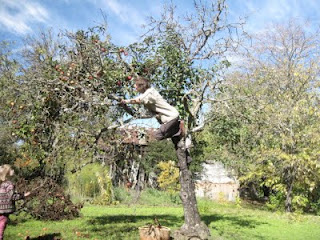 ard. Trees as far as the eyes could see. I could tell most were walnut trees because they had a darker base and a lighter grafted tree on top (walnuts need grafting to grow well). It was big and the fact that I couldn’t see a single grape was re-assuring because we were in Napa.

“Girls, apples!” I yelled. Across from us, a Fuji apple tree. This time I was right about the apples. Getting closer, I understood why Mr. Hoffman had said that there were still a few apples on the trees “if I could get to them.” At 5″5, I wasn’t tall enough to grab the first apples! So I climbed in the tree, careful not to damage the 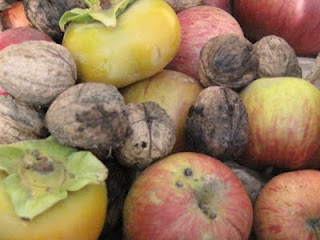 branches. I got my girls to move the baskets below so I could aim properly. Next to the apples, another apple tree, and a persimmon tree. We were enthusiastic and picked as if we were hosting a fall banquet the next day.

That’s when I saw a man in the distance: Mr. Hoffman in person, hanging his laundry to dry in the sun. I introduced myself. He was standing under yet another apple. “Arkansas black,” he said, “My favorite apple.” Of course, I wanted some and again, I was too short. “Could this help?” said Mr. Hoffman, offering his cane to knock down the apples. I gladly took him up on his offer and had my girls run under the tree to get the apples as s 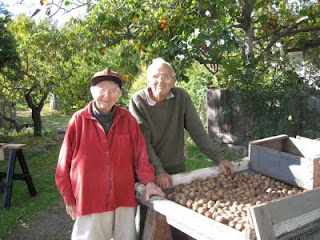 oon as they rolled on the grass. Mr. Hoffman started telling me about the orchard and I discovered a slice of Napa that’s now almost all gone.

When he and his wife bought the land in 1949, it was almost entirely planted in French prunes, with other small crops such as an acre of cherries. “There was a factory downtown that made maraschino cherries,” said Mr. Hoffman. Instantly, I had pictures of post-Prohibition cocktails with bright red cherries on the brim of clear glasses in my head. The factory’s now gone. There was also an acreage of wheat down by the river – the Napa river, that is. “The wheat was milled in the mill by the river and shipped by boat to San Francisco,” he went on. Again, I tried to imagine a pre-grape era Napa. The mill’s gone too now. Mr. Hoffman bought the 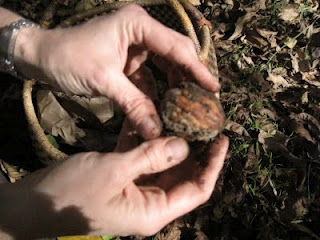 land and a tractor and got to work. He started pulling half of the prune trees and planting walnut trees instead, gradually increasing the acreage of walnut trees through the years.

“Why walnuts?” I asked. “There was a man up the road here who had a small walnut orchard,” said Mr. Hoffman. “I consulted with him and decided it would be a good crop that was not too time-consuming.” With four children at home, he needed a crop that was not too labor-intensive. Back then, there was a backlog of old Italian people living in a hotel downtown who pruned the trees during the winter.

I wanted to know more about the walnuts, when did they arrive to the Napa valley? Mr. Hoffman, a living en 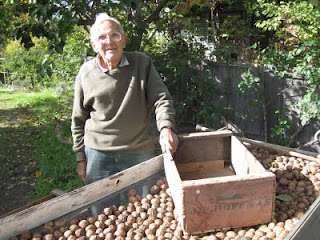 cyclopedia about trees -he wrote a book called Trees of Napa Valley that you can order here -obliged. The first walnut variety was Franquette, a French varietal. A man named Mr. Hartley brought back a bagful of them in the late 1880s and planted them at his ranch in Napa. In 1892, he experimented with a new Franquette-based varietal that later became known as the Hartley walnut. “It was an outstanding nut,” said Mr. Hoffman. The Hartleys brought their walnut to the 1915 Panama-Pacific International Exposition in San Francisco in 1915 and won a blue ribbon. Hartley walnuts thus became very popular. Showing me a tray full of walnuts drying in the sun, Mr. Hoffman pointed to some b 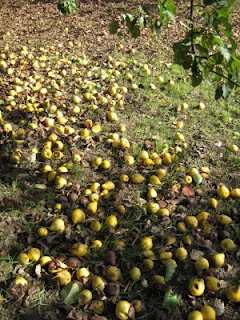 ig ones. “These are Carmelo walnuts,” he said. They were twice as big as the regular kind.

Mr. Hoffman’s wife, Margaret, joined in the conversation. “We live here as in the 1940s,” she said with a smile, adding:”When we moved here, our plan was to grow as much food as possible.” Indeed, they have a vegetable garden for their meals; a well for their water; they keep their house warm with a wood stove during the winter. When they were raising their children, they also raised a couple of cows and goats for milk, and made a goat cheese similar to the Neuchatel cheese. Honestly, you’ve got to love a nature-loving couple who grew and ate locally seasonal produce before the word “sustainable” went around! More than sustainable, all the fruits they grow are organic (they don’t spray) and because of the proximity to the river, the orchard is not irrigated. How’s that for the green award?

Before I took my bow, I went to pick a few Asian pears (the variety t 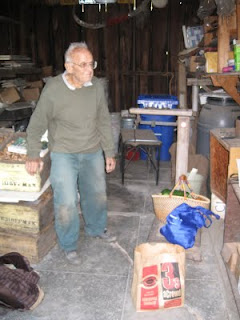 hat actually looks like pears, not like apples) and Mr. Hoffman weighed all my produce on his wood and metal scale. I might come back before the winter is over. There are still cartwheels of walnuts around and there will be persimmons until Christmas.

My last words: the Hoffman Farm is an endangered species in the Napa Valley. These walnuts grow on land worth millions of dollars in grapes. Let’s hope that whoever takes over from the Hoffmans prizes this luxury as much as they do. More than a reminder of the past, I’d love this farm to be a sign of the future. And when you go there, don’t forget to stop at Dorothy’s, their neighbor up the road. She sells fresh brown eggs by the dozen.

One thought on “Hoffman Farm: The Last Walnut Orchard in Napa Valley”