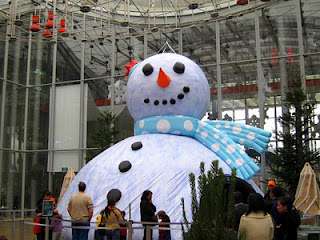 > Holidays at the Golden Gate Park

Holidays at the Golden Gate Park

You know Dasher and Dancer, and Prancer and Vixen. But do you know Miles and his charming date from the North Pole? Well, not exactly the North Pole because they’re at the California Academy of Sciences in the Golden Gate Park and under the clear roof of this venerable institution, accuracy of the essence. These two reindeer come from southern California are a small fraction of all the winter holidays fun now waiting for kids at the Golden Gate Park.

‘Tis the Season for Science
Until January 16, 2012, the California Academy of Sciences invites you to come and learn what makes winter such an exciting season for kids and adults alike. I took my girls last week because they wanted to enter the reindeer naming contest. You see, the older reindeer has been named Miles by public vote. Fitting for a reindeer who can travel up to 3,000 miles a year.

The younger one, the female, yet remains to be named and the winners of this contest will get an up-close and personal reindeer experience at the Academy. The contest closes on December 5 so you still have a few days to go see what the reindeer looks like so you can think of a scientifically appropriate name.You can enter here.

After the reindeer – an exciting sight for young ones – we lined up to get inside the Snowman Theater where a short movie told us about the science of snow. I was impressed at how this small dome could seem a lot bigger with the surrounding images of snow landscapes, earth in space and snow crystals.

Other holiday activities planned at the Cal Academy include the California Revels’ Solstice Ensemble, Yuletide Caroling, a Dance-Along Nutcracker and Eskimo traditions. You can check the full list here.

Naturally this was a Cal Academy visit so we had to stop by the Galapagos exhibits and play the interactive “squash the bug” games. Don’t try this in state parks.

Playland at the Conservatory of Flowers

Every year the San Francisco Conservatory of Flowers puts up an impressive miniature train display with buildings and decor made entirely out of recycled and repurposed materials. This year’s new exhibit, “Playland at the Conservatory: A Garden Railway Celebrating San Francisco’s West End” runs until April 15, 2012 and recreates a scaled and simplified version of the popular amusement park that drew so many families along Ocean Beach from 1928 to 1972 – Playland By the Beach.

Old timers will immediately recognize their favorite rides (Big Dipper, Diving Bell, the Fun House) but newbies will have fun just imagining what the park must have been like in its heyday. The majestic Cliff House and the Sutro Baths are still standing and thriving, a nostalgic view of the western lands.

To enhance the theme park experience, the exhibit room features arcade classics such as Laughing Sal, Zoltar the fortune teller, funky mirrors and a real Dodger bumper car that makes a revving engine noise when you push long enough on the pedal.

My 8-year old spent close to 30 minutes looking at Zoltar and reading her fortune over and over again because “mom, look, what it says it’s all true!”. There you go. For 50 cents you can learn everything true about yourself and not need to worry about tomorrow.

We couldn’t resist the 1960s vintage photo booth where we did 4 different portraits on one strip – and it came out with a Playland signature. Other winners with kids were the “test your strength” hammer and bell game as well as the bumper car. I’ve always found Laughing Sal creepy at the Musee Mecanique, I’m not going to think it’s any less creepy here but kids seem to like it.

Now move over to the garden railway and look at it – open your eyes. First the buildings – play a guessing game. What parts can you identify? Do you have any at home? Can your kids tell what they are?

We found old wooden rulers on a mill, playdough containers on buildings, pencil sharpeners on the ferris wheel and a chess board above the Fun House. Don’t miss the trolley above the red slider turtle pond, it’s a tad lonely on the left end but it’s a nice surprise! Man, the designers have been creative this year again.

Once you’re done admiring the decors, you can check the TV screen in the far right corner of the railway model. It doesn’t take long to realize there’s a live camera on one of the trains. Awesome! Now kids have to figure out the best spot to see their hands or face on TV. Mine found a pretty good spot around the curve and spent 10 minutes making faces and waving their hands way too far above the tracks.

It was good fun and I almost wished Playland was still around, just to see how it really was. And the Sutro Baths while I’m at it. And the old Cliff House too. San Francisco’s seaside was a gem in the late Victorian era and what remains today is mostly memories. Thank God for exhibits like this one that revive Ocean Beach’s glory days with lush miniature landscaped gardens.

One thought on “Holidays at the Golden Gate Park”