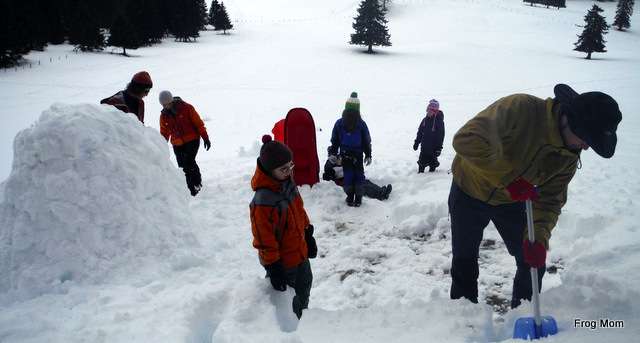 > How To Build An Igloo

How To Build An Igloo 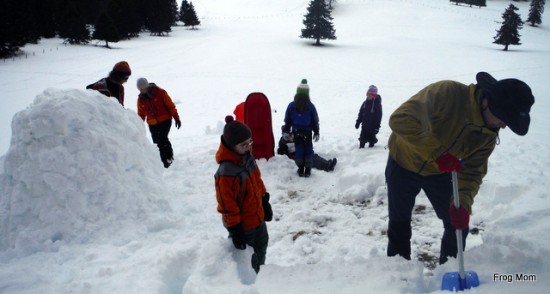 Friends with a shovel, don’t you love them? Them and the crazy thought that since you’re outside on a snow day, you might as well build a real igloo. Why not? Let’s face it, we all dream about igloos. They’re the ultimate I-built-it-myself winter hut. They’re cheap architecture too – only natural materials needed. Last but not least, building an igloo isn’t rocket science. If you can play with Legos, you can build an igloo. Here’s how we built ours in 20 minutes flat, with one shovel and three adults – and how we made four kids extremely happy.

Let me start with your prime material, snow. You are going to cut big squarish blocks of snow and stack them up as a dome. For that, you need snow that’s packed – no powder. Think about water-logged compact sand versus dry sand to build a sand castle – same concept. If snow is good enough to make a good snowball and a good snowman, it’s good enough for an igloo.

This is the hill where we built our igloo, right under the trees on the left. 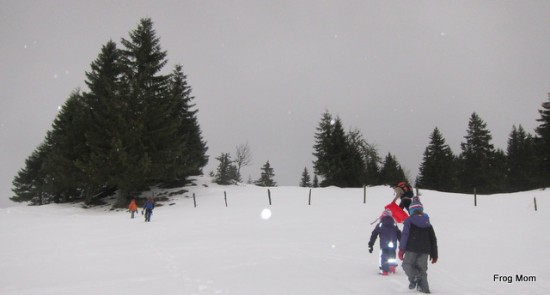 To build igloos, it’s easier if you can use a snow shovel. These guys are collapsible, lightweight and easy-to-pack shovels on the go. Find a nice snowy area and start digging vertically until where your feet sink. This will be your “quarry.” Our blocks were roughly 30cm by 30cm or 1 foot by 1 foot. 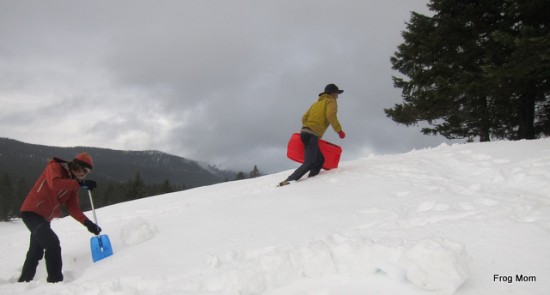 Once you’ve cut off a block, bring it to wherever you want your igloo to be. We built ours on a slope facing downwards to have a good view of the winter hills. Since I was the initial block-layer for this igloo and I had no idea what I was doing, I just lined the first row in an arc on the slope. Just so. 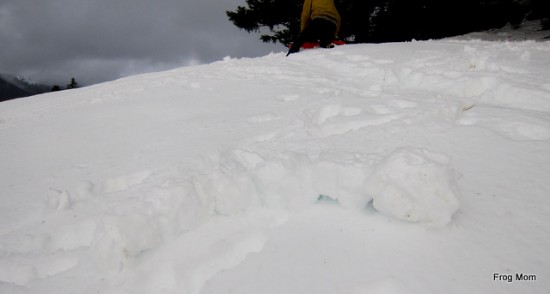 The basic structure looks like a circular spirale with an opening, each semi-circle being smaller than the one below. More blocks came and we kept building. At first, the kids paid no attention to us and built a snowman or went down the hill on their sleds. After we’d piled two levels, they became interested. It was starting to look like an igloo was in their future. 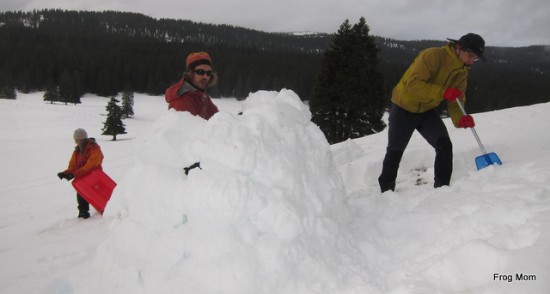 Two of them even came to help and insisted on using the shovel to cut snow blocks too. 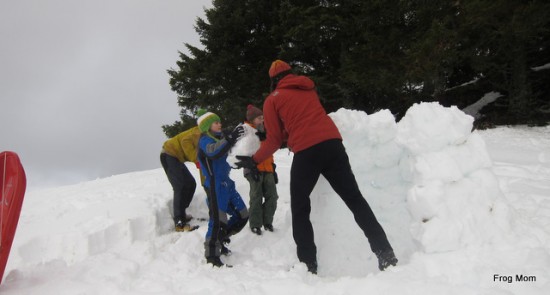 The igloo area soon became a buzzing beehive, with snow bricks stacked up child-high and walls leaning inwards. Inwards yes, but not together yet. Obviously, we needed to bring the walls together and build the dome without having the whole thing collapsing. I volunteered to play cornerstone from inside the igloo. 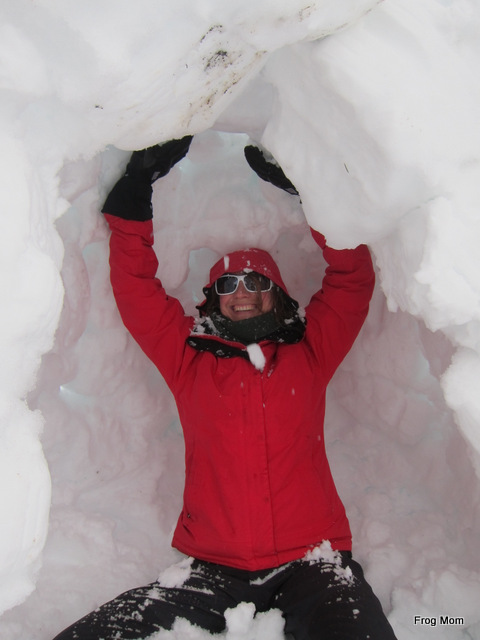 Supporting one big block with two hands, I waited until two other big blocks were laid in opposition and then, snow patted down on them from above so they would consolidate. By far, this was the most challenging step of the igloo construction. We now had an imperfect dome. What about an entrance? We kept digging. And we kept stacking up. 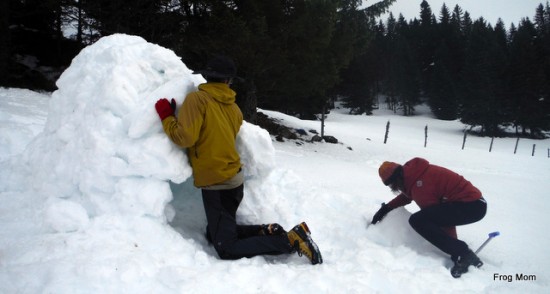 Once the structure was finished, we went inside and pushed the snow against the walls with our shoes to level the inside area and make it slightly more roomy. Now it was ready! Here children could play inside and outside, communicating through small windows. 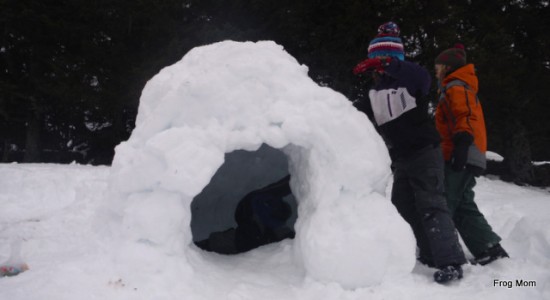 They could also stay inside and enjoy the view. 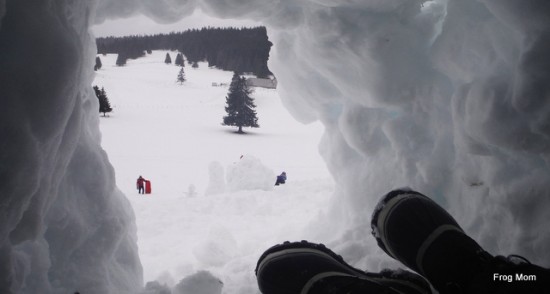 Or climb on top and slide down. 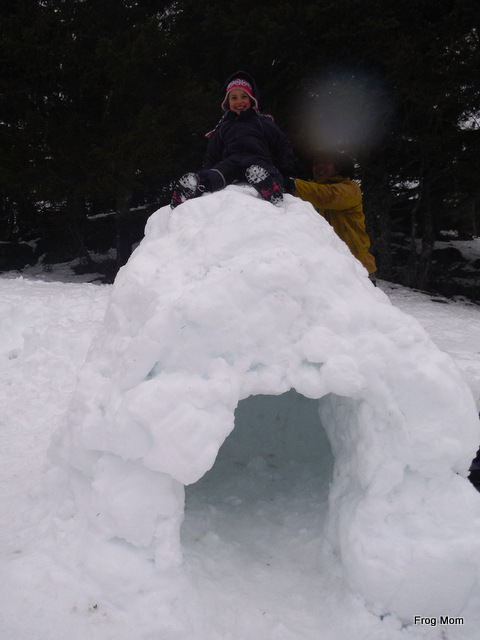 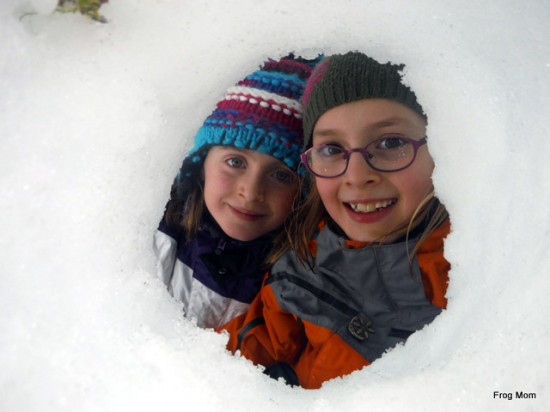