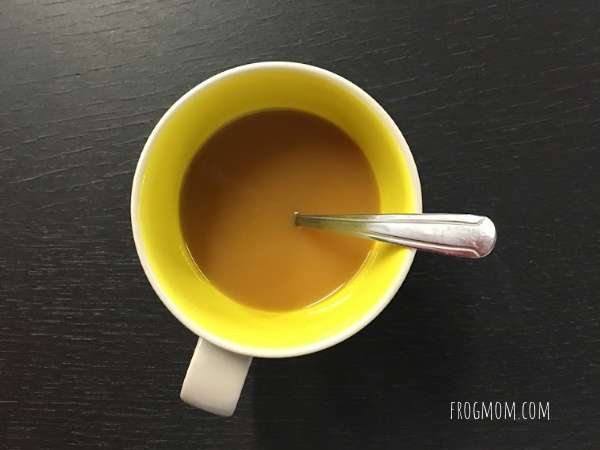 > How to Make Dandelion Root Coffee

How to Make Dandelion Root Coffee

Among the many foraging recipes I’ve always wanted to try, there’s acorn flour, bay laurel nut tea and dandelion root coffee. Last week during a sunny Sunday at an English garden, I harvested a bunch of spring dandelions that hadn’t gone to bloom yet and took them home with one idea in mind – that the next day, I would drink a cup of dandelion root coffee and finally know its taste. It was a time-consuming affair but the result was delicious. 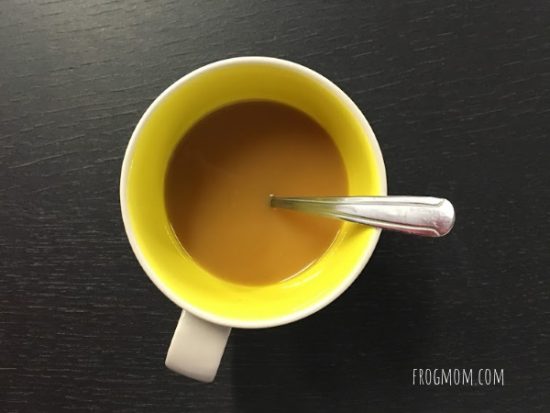 If you doubt my word – I could be biased after all, you’ll have to take the word of seven of my colleagues as I brought this experiment to work. They were suspicious at first but it was a success! Biscuity with a hint of malt is how they described it and I couldn’t agree more. It was delicious and since it’s dead easy to do if you have dandelions underhand, here is how to make dandelion root coffee.

Dandelion roots are deep and contain many of the plant’s health benefits. Not only are they a rich source of vitamins A, B, C and D, as well as minerals such as iron, potassium and zinc; but the bitter substances in these tubers also aid in detoxification and liver stimulation.

Fortunately, dandelions is very common in pastures, lawns, orchards, hay fields, waste ground and roadsides, places where you and I can easily harvest dandelion roots.

While dandelion plants above ground are easy to pull out, dandelion roots often stay in the ground as they tricky to remove. Going deep in the soil, they’re not necessarily straight and tend to branch out with thin hairs. A simple pull doesn’t do the trick. 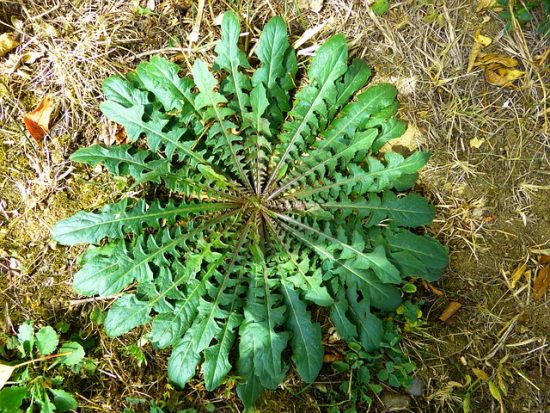 As far as timing, harvesting after the rain is the best possible time as the soil will be damp and easier to manage. Some people advocate for dandelion root diggers – I’m a low tech person and used a kitchen spoon. Kneeling by the plant, I grabbed the greens with the left hand, feeling for where the root started. Then I started digging with my spoon around the root, going in circle and occasionally twisting while pulling as I wasn’t sure when I’d reached the end of it. Sometimes, the roots broke halfway. Most times, it worked just fine. This is what I took home. 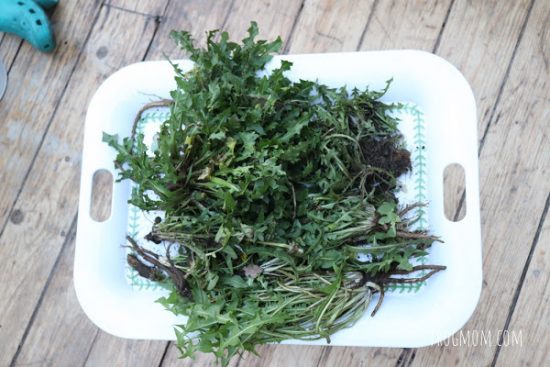 As you can see, the ratio of greens to roots weighs heavily in the favor of greens but that’s ok because are edible too and make great salad Nicoise!

With a sharp knife, I cut the roots as close as possible to the green part of the plant. I realized then that all the roots were full of sticky dirt and that they would be a pain to clean. That’s where my nail brush came in very handy! With the help of my brush under trickling water, I patiently scrubbed each root and root cranny until they were clear of dirt and other nasties. 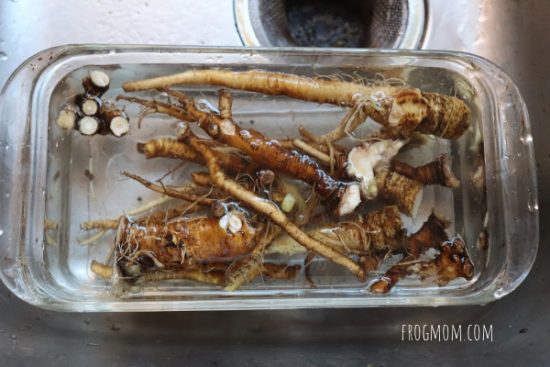 This was the result. It doesn’t look like much and indeed, after weighing them, it was definitely not much. 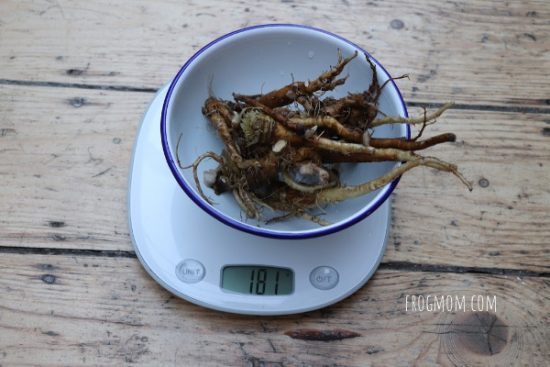 Once I had my dandelion roots clean and dry, I sliced them lengthwise which is trickier than it sounds as the roots are not straight at all. Anyhow. Phase 1 of roasting was the dehydrator. If you don’t have a dehydrator, you can dry them in the oven over low heat (50C/120F) during an hour. 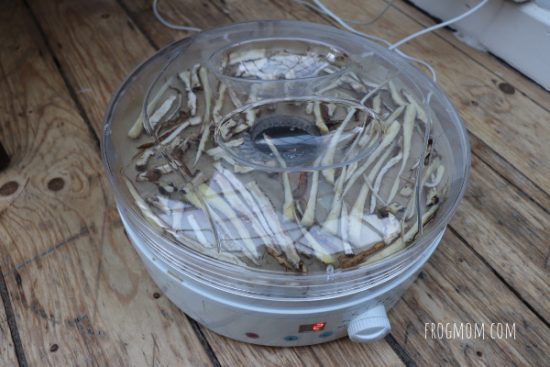 I used two trays as I ended up having more roots than I thought.

After an hour in the dehydrator, it was time to bring in the oven and begin the actual roasting process. 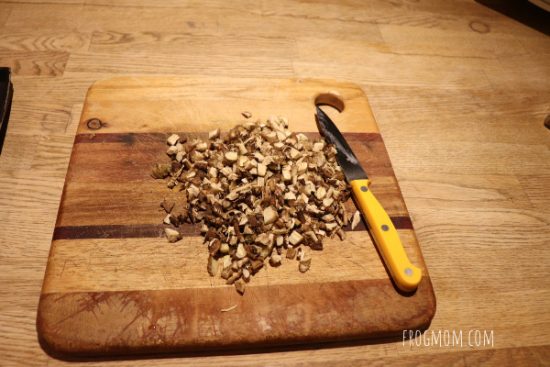 I sliced the roots in small pieces so that they would roast more evenly in the oven. Into the oven they went, 30 minutes at 150C/350F. 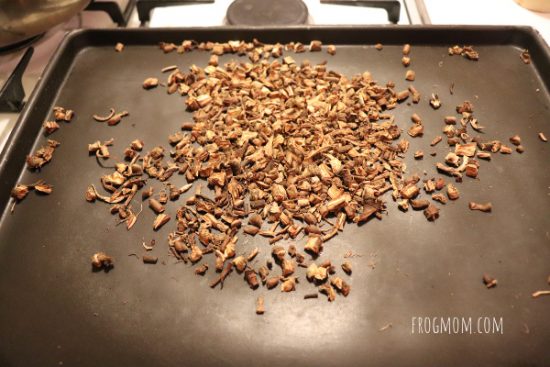 You were perhaps wondering at which point the dandelion roots were going to magically transform into a powder? Well, it’s now. 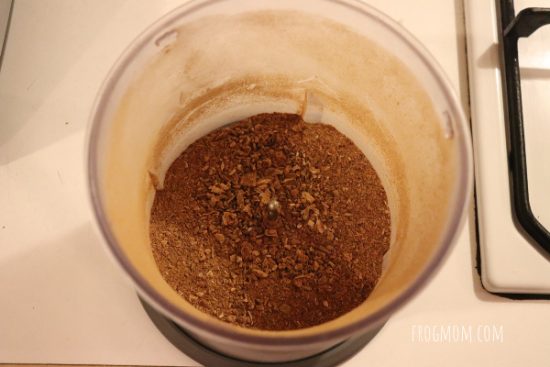 Initially, I dumped my ridiculously small amount of dandelion roots into a normal size mixer but the pieces weren’t getting any smaller. The bowl was way too large. I transferred all the roots into my bullet blender and it worked a treat. I blitzed until the powder was fine enough with a few bigger chunks.

But wait, this isn’t the end of it yet!

When you thought the dandelion roots had been roasted enough, you still need to roast the ground dandelion roots one last time. Into the oven for 5 minutes at 180C/375F. 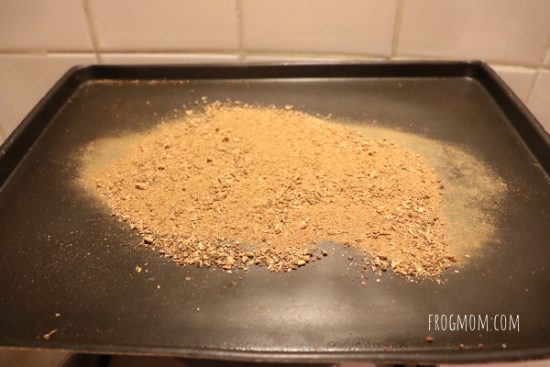 Now you have dandelion root coffee that’s ready to be used when cold.

Per cup of dandelion root coffee:

Boil water in your kettle or on the stove top. Steep the powder into 1 cup of boiled water and let it sit during 30 minutes.

After 30 minutes, filter the resulting liquid through a fine mesh or kitchen paper towel so that you have 1/5 of your cup filled with liquid. Save the rest of the liquid for later.

Top up with rice coconut milk (hot or cold, to your liking) and add maple syrup. 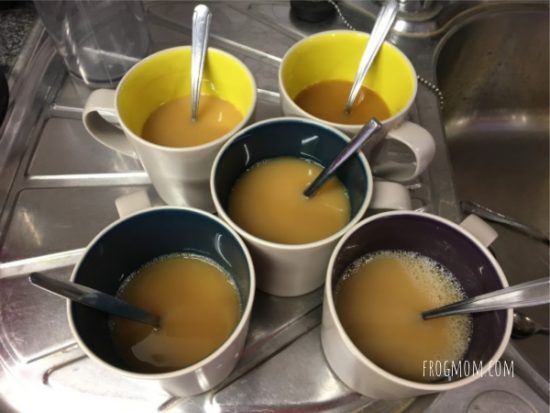 One thought on “How to Make Dandelion Root Coffee”