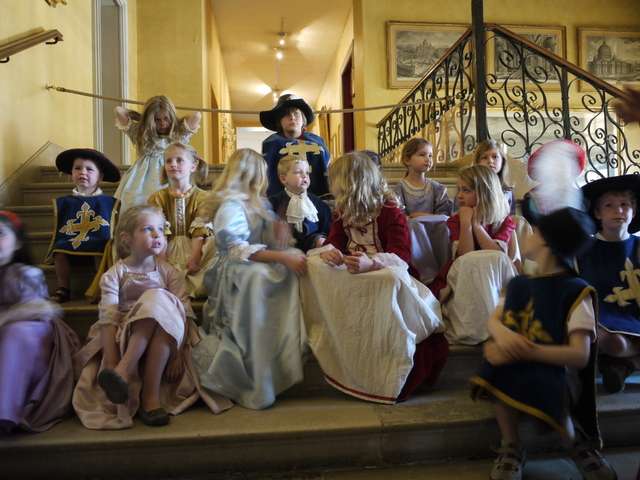 > Organize A Princess Birthday at a French Chateau

Organize A Princess Birthday at a French Chateau 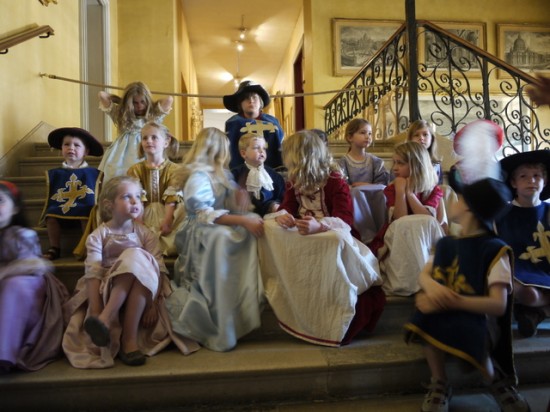 I’m not one to advocate for the Princess Syndrome and the Disney smorgasbord of pastel-dressed princesses. However I’m not blind to what makes my girls dream either and after years of denying them any sort of “princess privileges” (dollies, toys, dresses, you name it), I decided to indulge in the princess syndrome my way. If we had to throw a princess birthday before they outgrew the epidemic, it’d be at a French chateau in style, where the princess theme actually belonged with the history of the place. Luckily my second daughter is a mid-June baby and right after the end of school, we flew to France to celebrate her 6th birthday with my family and friends.

A friend of mine had tipped me off on the kid costume tours at the Chateau de Vaux-le-Vicomte. She’s an 18th century historian and always knows about the fun side of that century. “Kids get to dress up and then they visit the chateau learning how kids lived and played in the 17th century, it’s a riot,” she told me. Since Vaux-le-Vicomte does not have a kid birthday package (I think they’re missing out big time), I decided to hijack their costume tour concept by inviting 8 little friends and throwing a picnic lunch after the tour. I bought my tickets online 2 months ahead, emailed the chateau to confirm we were good on details and picnic area, and emailed my friends to save the date.

D-Day, 11am. Once all our young guests and parents had made it to the chateau, we all went up the grand staircase to an obscure hallway with a secret unmarked door leading to the dressing room. Included in the 8 euros per child is the access to a period costume dressing room where children can change into princes, princesses, peasant girls and musketeers. Not surprisingly most boys preferred being musketeers over princes and most girls preferred being princesses over commoners. I wish they had a girl costume that’s more “girl power” but they don’t. However the dressing room was a delight. In true French fashion, it was not designed with kids in mind. It was a simple room whose walls were lined with kid costumes on hangers and hats in chests. I looked up close and was amazed at the quality of the costumes. These were not cheap synthetic shiny costumes. They were custom made by a seamstress who lives in the village. Ha! Bonus points on the costumes.

All dressed up, kids met with their tour guide, a woman dressed in 17th century costume who was going to take them around the chateau’s rooms and tell them about life at the King’s Court (the King being Louis XIV), the history of the castle and how kids fit in in this extravagant and sumptuous decor. You may have heard about the Iron Mask. He’s a fun mystery of French history and rumor has it Nicolas Fouquet, the chateau’s owner, knew his identity. Well, they were jailed together after all. Indeed Nicolas Fouquet was a powerful finance minister for Louis XIV but an over-ambitious one and jealous members of the court spent years scheming his downfall.

In 1661 when Fouquet invited Louis XIV to his chateau-warming party at Vaux-le-Vicomte, the king was both upset and humiliated at the exquisite beauty and taste of it all. Fouquet learned the hard way nobody could outshine the Sun King. Shortly after the party, Fouquet was jailed for life, his estate confiscated and his artisans hired to build Versailles. He died in jail 19 years later, having been served in jail by the Iron Mask. Aw, were my little guests – ages 2 to 9 years – going to keep up with a 90-minute detailed tour?

When the tour guide talked about the castle’s history in one of the formal reception rooms, I could see some kids acting fidgety and cranky. Yes Fouquet, yes Louis XIV, yes that was long ago but when does the fun stuff begin? When we entered the bedrooms with plush four-poster beds, red velvet walls and gilded mirrors, then a hush descended over our group. Clearly, we were in fairy tale business if those were the real beds people slept in. Intrigued, my 6-year old wondered about the Princess and the Pea. How many mattresses here? Bringing back the tour on more historical tracks, the tour guide nevertheless indulged in the kids’ imaginations and answered their oddest questions with good grace.

More bedrooms followed and then everybody was squeezed tight in front of the “water closet”, the 17th century bathroom. This was my girls’ aha! moment on deciding whether or not being a 17th century kid was cool. One moment they told me how cute the bathtub looked. The next they “ewwwed”  with everybody else in disgust as they learned that the same bath water was shared by up to 21 people and kids were often the last ones in line. Imagine 20 filthy people using your bath water before you get in, imagine the color and the smell. Thanks but no thanks! That was when my kids decided they’d rather live here and now.

Fortunately a few games reconciled the young crew with chateau-living but not to the point that they’d trade their life for that of young kids at the court of Louis XIV. In one of the game rooms, kids took turns walking a straight line with a book on their head – hence practicing the right back and head posture at the King’s court. The older ones wrote their names on paper with quill and ink. In the domed entrance hall surrounded by French doors opening onto the garden, kids practiced their bows and salutations according to the 17th century etiquette. I say, they all did a pretty good job regardless of age.

However it’s outside the chateau that all that channeled kid energy finally blew up and our kids regained their 21st century freedom of movement. Playing  hoops and swords under a scorching sun in, some kids started to take off their costumes while others stayed in character for the last games of the day and they all had a ball. At 12.30pm it was the end of the tour and the kids returned their costumes. They were ravenous!

We all headed to the picnic area, a series a picnic tables protected from the sun by a wooden structure and surrounded by green paths. I whipped out cold spreads, salads and cuts on the tables as well as cold drinks. The kids ran away after a few bites. Stinging nettles brought some of them back in tears but mostly they avoided big trouble and played hide-and-seek or explore the woods.  After the cake – chocolate, raspberries and red currants – we all came back to Vaux-le-Vicomte to complete the visit by strolling the paths and fountains of the garden and exploring the kitchen. At 4pm we were all knackered out and ready to go home.

It was a full day but my 6-year old had had her princess birthday – minus Snow White, the Sleeping Beauty and undesirable consorts.