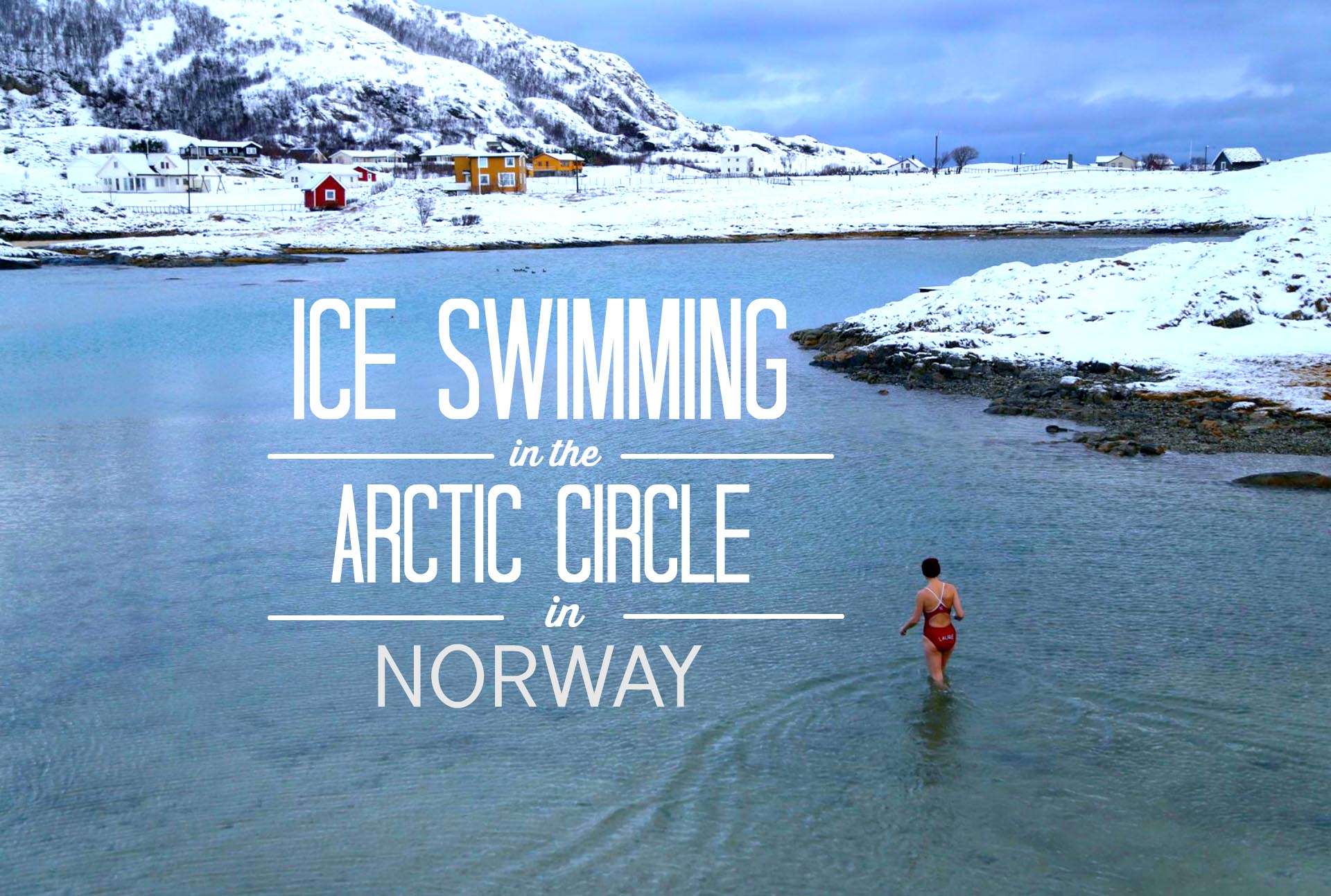 > Ice Swimming in the Arctic Circle in Norway

Ice Swimming in the Arctic Circle in Norway

Changing into your swimsuit on the beach is usually fine, but when the sand is covered in snow and night’s falling, you do it fast. In February, my family visited Tromso in northern Norway above the Arctic Circle and our to-do list included something like “dogsledding & snowmobiling with the kids + ice swimming.”

Located 217 miles north of the Arctic Circle, Tromsø was going to be our base and I knew that people swam outdoors in the winter. Better yet, I was lucky to have them met them (Egil and friends) at the Big Chill Swim a few weeks before (thanks to my friend Rod). Egil’s wife is a winter swimmer and I told them that I’d love to swim in Tromsø. “We swim every Friday from the beach in Tromsø at 6pm,” Egil said, “Come and join us!” I took Egil’s word for it, his phone number and out of our six vacation days, saved Friday 6pm for swimming. During that trip, I was able to swim twice in two different locations.

The first time was with new friends in Tromsø. Fast forward to Friday at 5pm. Egil asked his friend Terje to pick us up at the hotel, which was really nice. It was still daytime when we reached a parking lot but barely. We walked through a small wood on a narrow snowy trail and arrived at the beach. Some swimming enthusiasts were already there. Can you spot the folding chair on the picture?

These swimmers are extremely organized. Since they change out of the open – and literally freeze their asses off in the process – some of them use foam pads to create a thermal insulation with the ground. Clever! One by one, a small dozen of people arrived on the beach.

Some, like Terje, had swimming in mind. Others, like Egil, were cheerleaders and bonfire managers. Yes, a real bonfire on the beach to warm up before and after the swim. Is that civilized or what? Egil and his wife even brought chocolate snacks and drinks for my girls. They were over the moon and we chit-chatted until suddenly, all the swimmers dashed to a low wall on the beach. Time to get changed.

Hey, wait for us! They were extremely quick to change and a couple of them went in the water even before I had removed the top. I hurried up and went directly in the sea. A cold salty sea is the strangest thing ever for a swimmer who’s used to warm salty seas and cold lakes. I chatted with Terje who casually dropped that they watched their feet in the sea because of sea urchins.

Instantly, I retracted my legs like a frog and floated in the waves. I had no idea sea urchins liked cold water! Others were enjoying a chat with a wool hat on their head. We must have looked like a bunch of grannies having tea while discussing the weather. It was a very nonchalant affair! We didn’t linger a minute later, we all came out with a happy grin.

Terje has this fantastic wool hat with the colors of Norway’s flag on it. Once dressed up, he had a chat over the fire with my 10-year old. With the warmth and glow of the fire, we didn’t feel cold at all and I was grateful that we were able to join in this unique adventure. Hot tea, chocolate snacks, berry juice. What more could we ask?

Meanwhile, I was discussing with Egil who, in addition to having masterminded this friendly swimming expedition, was helping me get classified historical documents about a 1928 tragedy to the Polar Museum in Tromsø. They provided previously-unknown details about the last voyage of polar explorer Roald Amundsen aboard a Latham 47 seaplane (family history for me).

My second swim took place two days later in the beautiful coastal village of Sommaroy. We were staying in a Norwegian fisherman’s bungalow right above the water. The landscape was incredibly scenic and Scandinavian. Red and white bungalows, low snowy mountains, and most importantly – a small sauna in the bungalow. Yes!

My husband had stayed up late the previous night to photograph northern lights but I had not and in the morning, I was more than ready for a swim. The clear water looked so inviting from the main windows facing the bay. I went out the door and stepped out onto the snow. Barefoot, I treaded softly on the powder and followed the gentle slope. I was almost graceful until I slipped and fell on my bum! Ahem, snow is slippery on bare feet, silly me. I descended the rest of the short slope like I was walking on egg shells and held on to short grasses for dear life. Ah, the dangers of ice swimming are underrated!

The sky was incredibly moody and we’d heard that a blizzard was coming in around noon. Indeed, big menacing clouds were gathered almost everywhere and the light was changing. It had an electrical quality to it, like the sky was charged and was going to light up any minute. Without any wind, the place was eerily quiet. I couldn’t hear any birds. Maybe that’s normal in winter?

As you can see thanks to the water clarity, the bay was very shallow underneath the cottages and I had to walk quite a bit to find any depth. The sand felt extremely smooth and the sea must have been warmer than the air because getting in wasn’t too tough. Finally, I had to take to make up my mind. I was already waist-deep, might as well get the rest wet. Look ma, I’m in!

Exhilarated, I floated around like a happy sea otter and enjoyed the scenery. Initially, I wasn’t smiling that much (I’ve got a short video that shows me a bit tight in the first few strokes) but decided that for an ice swimming selfie, I probably should. And in truth, it was really quite scenic so the effort wasn’t that taxing. Smile, smile, wave to husband, wave to girls, smile.

This is me as a happy sea otter. It may look like I’m far but this is just pretend. I’m sure that I could almost have walked this far, but this defeated the purpose of my heavy ice swimming logistics. I probably stayed in five or six minutes and then swam back, very happy that I’d kicked myself in the butt and out of the glorious bungalow for a chill swim. It was fun! Two hours later, the sky was a solid grey wall and snow was falling horizontally. I’d been lucky with the weather.

This selfie was a runner-up in a winter swimming photo competition in H2O magazine and several people asked about the water temperature. The truth is, I have absolutely no idea as I didn’t check with a thermometer but I’m going to guesstimate 3 or 4C. Sea water always feels warmer than lake water so it probably felt like a 5 or 6C while being a tad colder. As far as winter swimming goes, it wasn’t uncomfortable at all. I’m not sure that answers anybody’s questions but that’s my guess.

This concludes my post on ice swimming in the Arctic Circle in Norway. As you can see, it’s a great way to make new friends and to enjoy a snowy winter. I’d say “go and try it!” but as you know, ice swimming is a dangerous sport so please, be careful and do your homework by reading what LoneSwimmer has to say on swimming in cold water.

I hope you enjoyed this from the warm comfort of your chair!