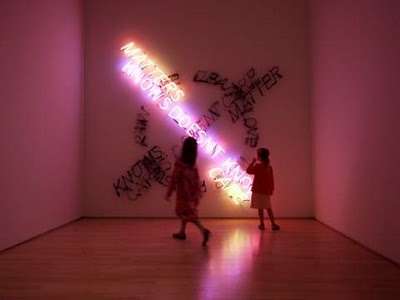 > If you go to the SFMOMA this summer

If you go to the SFMOMA this summer 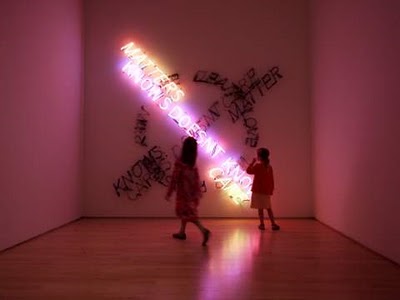 Go on a Tuesday evening between 6 and 8.45pm. Kids under 12 are free every day but adults are half-price only on Thursday evenings – and the SFMOMA‘s a lot less crowded. Plus, you can treat your kids to this “special” after-hours tour of the museum and get them dinner at the downstairs cafeteria where the vegan soup of the day is always a good choice.

After I found out that the SFMOMA opened late once a week, I decided to take my girls after camp to see the Calder to Warhol/Fisher Collection exhibition. My father had initially suggested it so it sounded like a plan. Fortunately, getting a street parking spot after 6pm on Howard was fairly easy so we just walked two blocks and in we were. 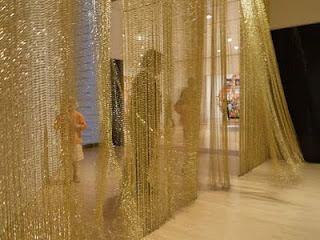 Special exhibitions are on the 4th floor. We walked inside the elevator and with four other people on board, every floor button was lit. As the doors opened on the second floor, we caught a glimpse of fluid gold movement. “Out we go!” I warned my troops as I pushed them out of the elevator. Immediately to our right was a giant curtain of gold beads hanging from the ceiling. Magical! “Untitled (Golden)” by Cuban-born artist Felix Gonzalez-Torres is the reason I love the SFMOMA. Playful, creative, fun. This is the antithesis of a stuffy museum. Kids can have fun too. Err, too much fun actually. My girls would have played in the curtain for hours if a guard hadn’t told them to calm down. 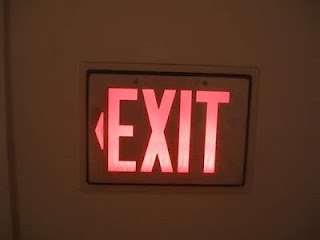 On we went. To reinforce the idea that “we can’t touch everything even if it’s tempting,” I got my digital camera out of my purse and told my girls they could each take a photo per room. Up to them what they wanted to capture. This was the best idea of the evening. Rather than running around, they paused for a sec and scanned the walls and space for anything catchy. Here a Franz Marc German expressionnist painting. There a giant blue metal ribbon called “Things to come” by Elizabeth Murray. They actually started using their eyes and their own judgment.

My oldest one even photographed the exit sign in the hallway. Yes, the exit sign. Just because. That’s cool though. Kids don’t have our preconceptions about art. If they like something then they don’t feel the need to justify their choice and that’s why the exit sign was as good a choice in my eyes as any other million dollar sculpture. I still remember the day I stood in front of a cleaning cart at the Frankfurt Museum of Modern Art thinking it was a weird modern sculpture – it was all white and everything on it was white – until the cleaning person wheeled it away. 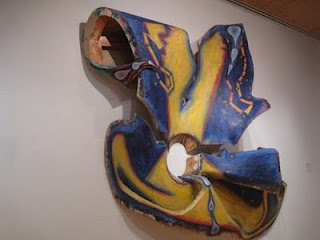 What really mesmerized my girls at the SFMOMA was the two media installations on the 4th floor. On one side, the movie “Passage” by Iranian female artist Shirin Neshat. Set to a haunting music by Philip Glass, the 11-minute movie shows men in black walking a shrouded corpse from the beach to the desert. Women veiled in black form a circle in the desert and dig the ground with their hands, moving their bodies as in some sort of transe. Meanwhile a little girl, kneeling behind a rock next to the women’s circle, builds an circular fort with rocks. At the end of the movie, the men arrive next to the women, the little girl gets up and a wall of fire goes off against the evening sky. Not Little Poney stuff, we all agree. And yet my little 5-year-old watched it three times. She insisted, kept coming back in the room, begged me to stay until the fire scene because it was so beautiful.

In the other room, a model theatre with drawings and animated black and white animated movie was rhythmed by the main arias of the opera The Magic Flute. Entitled “Preparing The Flute” by South African artist William Kentridge, the installation is like a miniature production of the opera in 21 minutes. Combining music sheets, shadow theater, masonic symbolism, and retro art, the installation transfixed my oldest daughter who insisted on seing it twice. She loves singing and I have to say, the musical extracts were worth just the 21 minutes, if the series of short films hadn’t been so entertaining. 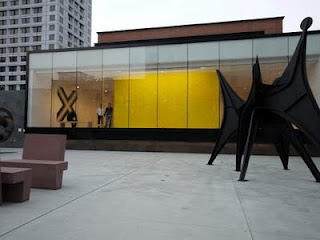 After I was finally able to tear them away from these rooms, we browsed the floor but it was getting late and they needed more action than the Calder mobiles. So we walked another flight of stairs to the 5th floor to access the Rooftop Garden. Garden is an ambitious word for an outdoors terrace with monumental sculptures but the space invites running around and there’s a Blue Bottle Coffee Company Coffee Bar at the same level, offering dark aromatic brews to adults and fancy art-themed cakes to anybody with a sweet tooth. For a more subtantial approach to dinnertime, we headed down to the Caffe Museo and ordered the vegan soup of the day: leek, potatoes, and truffle oil. 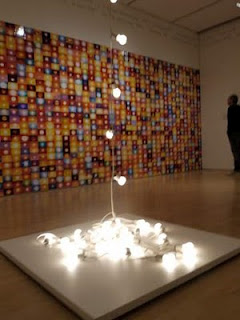 That pretty much concluded our visit as it was getting dark outside. This after-hours visit had me rethink the SFMOMA and how my family could interact with it. I’ve always thought modern art museums were best reserved to solitary or girls night out visits to understand the obscure depth of the message. After tonight, I realize kids can definitely learn to love art just by being exposed to it. No need to explain abstract art yet.

Judging by the number of kids we met – maybe two dozen other kids 6 and under – I’m not the only parent who thinks that kids and modern art are compatible species. Some of the youngest visitors were barely wobbly on their legs but amongst the oversize rooms and installations, they didn’t fuss. They didn’t scream. I like to think they were happy and so was I.

One thought on “If you go to the SFMOMA this summer”