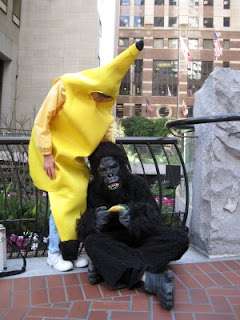 What better way to announce the birth of your little bundle of joy than to have a Banana Street Campaign where yellow-clad volunteers hand out 1,000 bananas in the middle of San Francisco’s Financial District?

I simply can’t think of a better way. This is how the San Francisco Zoo celebrated today the birth of a baby boy gorilla at the zoo.

I was on my way to lunch at the Crocker Galleria’s San Francisco Soup Company when I saw the lifesize banana and then the gorilla outside my office building.

Initially, I thought it was for a Jamba Juice marathon (they have lifesize running bananas to play “catch a banana” with children – motivating them to run 5K). Except there were no runners around.

“Have a banana!” offered a volunteer. “Why?” I asked. “It’s to celebrate the birth of a baby gorilla at the zoo.”

Indeed, there was a baby-blue street board with nursery type letters spelling “It’s A Gorilla!” just next to the entrance of the Montgomery MUNI stop. And my banana was wrapped (as the SF Chronicle puts it “cigar style”) in a green paperband saying “It’s A Gorilla” and “Name our Baby Gorilla Contest” with the zoo’s website.

I accepted a banana (actually two, since I came back later to ask questions) and pocketed it for my girls. Tonight over dinner I’ll tell them that the zoo sent them a banana baby announcement for a gorilla and that we’ll go visit him soon.

Actually, if you can’t make it to the zoo, you can even see a video of the baby gorilla here.

Overall, I think it’s a neat idea. The most curious part for me was the choice of that location to hand out 1,000 bananas. “Well … we work in this building,” said a man in yellow, pointing my building towering high above us. “And it’s a very high foot trafic area at lunch time on weekdays,” added a woman in yellow.

True, it’s pretty central. The saxophone player who plays “My Favorite Things” next to the bus stop every day after 10 am knows that as well as the guy who plays bagpipes (or friggin bagpipes according to Yelp!) at the corner of Bush.

So, if you work at a central location and want to do something nice for your zoo or favorite charity, dressing up as a banana could just be the thing.

Congratulations to gorilla mom. We hope the baby naming contest won’t yield a result San Franciscans will regret for the next 50 years (life span of a gorilla in captivity).

PS. If it’s not obvious, it’s a fake gorilla next to the lifesize banana. Don’t sue the SF Zoo for unfair animal treatment…