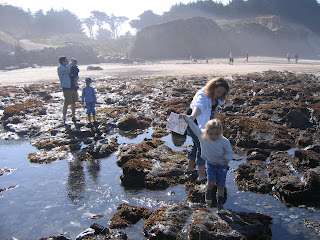 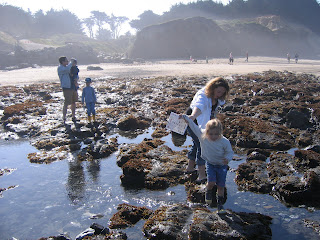 What do you do on a beautiful summer day in the spring? You hit the beach of course. First we went to Crissy Field (with half of San Francisco) then we decided to get back to basics and go tidepooling. The James Fitzgerald Marine Reserve offers the best educational tidepooling in the Bay Area. Less than an hour away from San Francisco, the reserve is set on a stretch of rocky coast stuck between the surfs of Montara and Half Moon Bay.
We checked the tides and decided to follow the recommendations, get there one or two hours before low tide for best viewing. Before we started, I bought three Mac’s Field Guide to California Coastal Invertebrates for 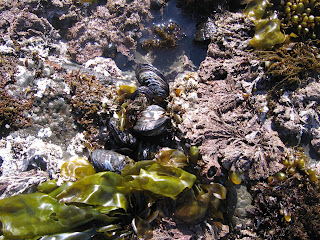 each of the three children to peruse. Laminated, easy to hold with clear illustrations, they were instant hits as we stepped near a sea mussel and examined it. We found it on the guide and the children loved it!
We then left the sandy beach and cautiously proceeded towards the tidepools, trying not to squish algae and blob green seaweeds. The first inhabitants we said hello to were the Hermit crabs. I was reminded of Eric Carle’s book A House for Hermit Crab that so aptly describes the life of an hermit crab in search of a home.

Once I showed one to the children, their eyes became super aware of their surroundings and they spotted hermit crabs everywhere around us. Here a little black turban snail moving, there a ringed top orange snail on the go, we were in hermit crab territory for sure.

A few limpets and acorn barnacles later, we started seeing colonies of sea mussels. At first they appeared in small clusters inside the tidepools, then they spread out like crazy. Andrew actually showed us an entire rock covered in spiky shiny petroleum color sea mussels. It was 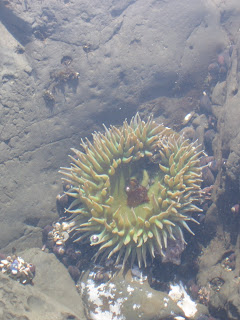 quite a sight and there was a seagull sitting on top of them preparing her menu for the day.
As we ventured further, we loved seeing the green anemones opening up in the water. Closer to the shore, they looked more like dirty spongy blobs, but further out they bloomed graciously and swayed back and forth as tides rolled in and out of the tidepools. I’m not certain whether they were aggregate anemones or green anemones but they certainly had that light pink coloration of the aggregate kind.
As we walked on, they also seemed to get bigger in size and the children loved pointing them out to us under rocks. Our two older ones (ages 5 and 4 years old) were frolicking about in rain boots whereas the two smaller ones (ages 2.5 and 1 year old) got scared by the tidepools and preferred being carried around. 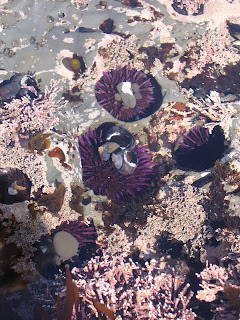 As we kept looking for starfish (I told the children I’d seen a sunflower starfish at the same spot six years earlier and it had 21 feet), we stumbled upon the ethereal purple sea urchins, safely tucked inside round rocky cavities. Like the other tidepool inhabitants, once you see one, it seems you’re surrounded by them. They looked like flowers yet the children knew they must not touch them. That’s the spiky effect.
We were now almost feet in the water and even though the tide was still receding, the children wanted to get back to safer terrain. Louise started slipping on the rocks, Iris was whispering that it was scary. Only Andrew was so excited by his recent discoveries that his curiosity led him to explore a few more tidepools. 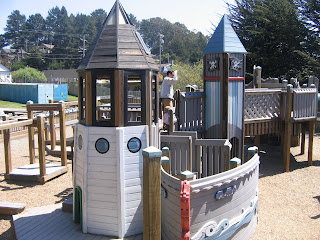 As the icing on the cake, we crossed the freeway to Virginia and Etheldore in Moss Beach where I’d heard stood a great community-built playground: Moss Beach Park. It really is great! Pirate boat, miniature lighthouse, dolphin slides, tot area, reclining swing for infants, nooks and crannies to play hide and seek, it was nice and the children couldn’t get enough of running around. It got a little bit hot and as thefirst fits appeared, we knew it was time to retreat.