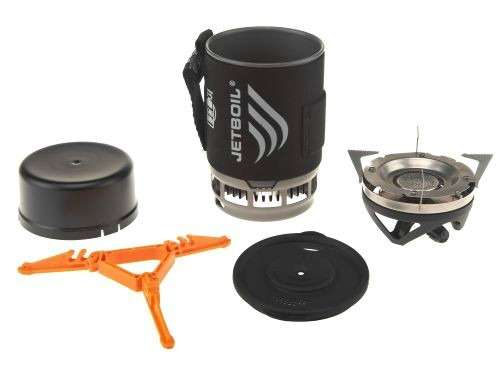 I cancelled my favorite hiking magazine subscription just to receive the JetBoil Zip cooking system as a “gift” for (re)subscribing. I had coveted this compact stove for a few years but we already had a camping stove that worked just fine. Two backpacking trips later, I’m a fan of the JetBoil Zip. In fact, it has replaced my other stove to become my main cooking system both for family backpacking trips and backpacking trips without kids and I’m sharing my experience here in this JetBoil Zip review. Since I also love to eat, I’m sharing a few recipes and food ideas that work well with my family.

If you like being outside and are nervous about cooking on family camping trips, this could really change the game for you. 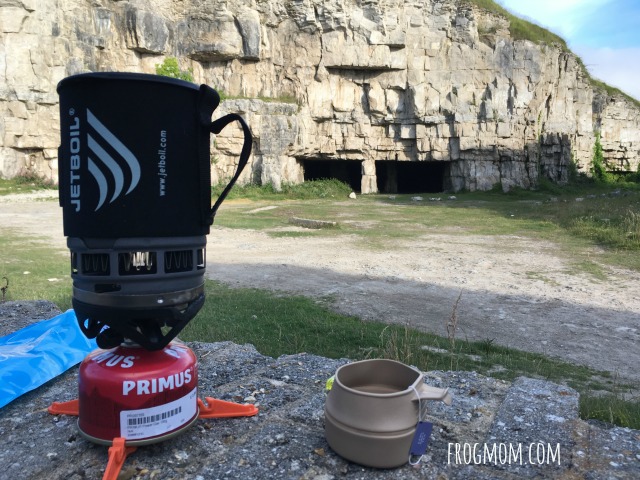 Buy the JetBoil Zip here: US

The JetBoil Zip is the cheapest of the JetBoil cooking system range and in many ways the most basic, but it includes all you would expect from a JetBoil. It’s built like a nesting doll and when you put the parts together in the right order, it all fits together neatly. Inside the cook pot, you can fit

The base of the pot is covered by a plastic cup that doubles as measuring cup (mine is graded in oz and mL) and I fit a small lighter inside the cup to have my cooking system ready to go. (Note to self: add flint stone fire starter for security.) You won’t get a separate windshield for the burner as it’s already part of the design with the FluxRing. Last but not least, the perforated lid with spout doubles as a strainer. 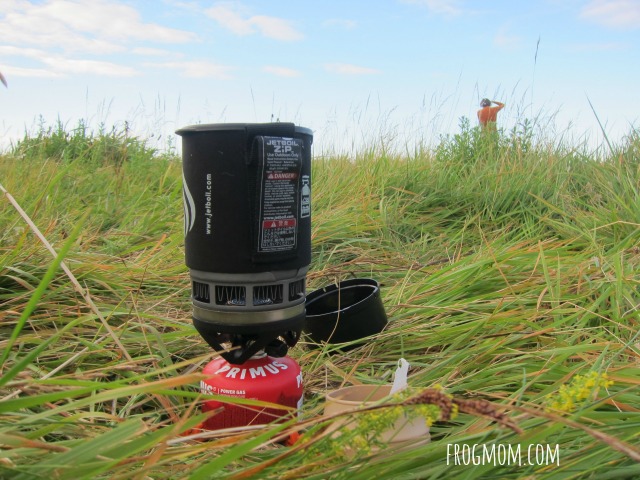 When I received the JetBoil Zip, I pulled it out of the box and was amazed by how compact it was. I mean, it was smaller than the teapot on my desk and weighed less than a pack of dry pasta in my pantry. Very precisely, the specs are

I’ve seen Starbucks coffee cups bigger than that. In terms of packing space, it totally beats the volume of my classic backpacking system consisting of a one-liter pot + camping stove + gas.

Given the (small) size, I wondered how this camping stove would perform for a family of four. Two hot meals per day over three days–would it be enough for 2 adults and 2 older kids or was it going to be a “side” stove? The only way to know was to go on a backpacking trip. 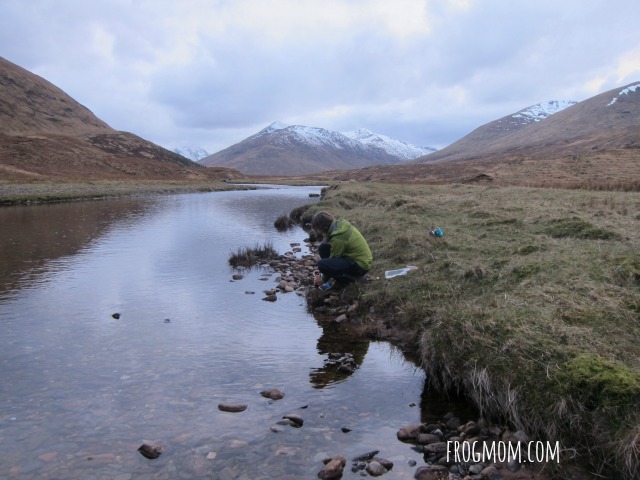 In the spring, we backpacked our first ever unsupported long distance route, the beautiful Affric Kintail Way in Scotland. With 50K of trails over mountains and glens, we packed three days worth of food in our backpacks and a tent. When my husband saw me pack the JetBoil Zip in addition to our regular camping stove, he said, “It’s heavy enough as it is!” Well, I protested, it’ll be handy for hot drinks. And that was that.

On our first night in the Scottish mountains, I looked at menacing clouds and decided to get dinner cooking presto before another storm bashed us. The afternoon had been pretty wet thus far and it looked like we were in for more horizontal rain. I set our big camping stove in a spot sheltered from the wind, deployed the windscreen and opened the gas valve. Nothing. The stove refused to switch on. I had a mild moment of panic. The connector tube was probably clogged and I hadn’t checked it before leaving.

JetBoil Zip to the rescue! Since I didn’t have any instructions, I opened it and figured out how to use it up on the spot. It was super easy and I quickly found out that you have light the stove before mounting the cook pot on the burner–which by the way, can be a bit fiddly. Once both were connected and the system stable on its three feet, water started heating up and dinner (fortunately, freeze-dried food and instant soups) was on the way.

The main advantage of the JetBoil Zip cooking system is its speed. On the website, it says that this insulated pot boils 0.8L of water in 2.5 minutes (or in real life, 3 minutes or so). When we camp or backpack, time is usually a big factor when cooking meals as we’re ravenous for a real hot meal after a day out. You can only eat so many snack bars before dreaming of a pot of steaming rice. Also as temperatures drop fast at sunset, the quicker we eat the better.

With my Primus camping stove, cooking dinner can be an exercise in patience. First, I have to find a spot well sheltered from the wind, flat-ish and big enough to accommodate the tripod stove, the windscreen and the gas canister (connected to the stove via a tube). This can prove a challenge when camping in grassy meadows (no rocks to double as makeshift tables) or in windy conditions (normal conditions in many spots of England and Scotland, it seems). At best with my regular stove, I have dinner cooking in 10 minutes and a hot meal ready in 25 to 30 minutes.

With the JetBoil Zip system, I’m cutting that time by half if not more. Including food rehydrating time, I can get a hot meal ready with a JetBoil Zip in less than 10 minutes and several cups of hot chocolate ready in less than 3 minutes, which is frankly awesome.

Yes, that’s a big plus. As the name suggests, the JetBoil Zip boils water which is a blessing when it comes to cleaning up because you don’t have to remove scraps of food inside the pot after eating. People don’t use JetBoil stoves to heat up stews as cleaning with the neoprene sleeve would be a right mess and the heart is too strong. Therefore, it’s only boil water, wipe dry and store. Personally, I like that A LOT as cleaning pots with cold water is a real pain. 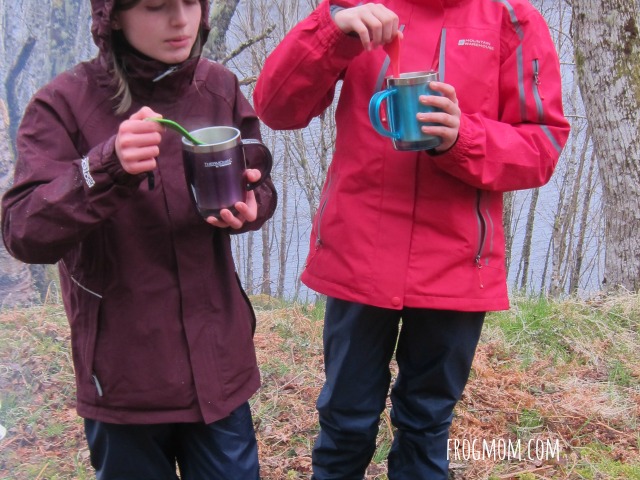 That said, the Jet Boil got me thinking about real food in terms of hot water. What can you do with hot water and a JetBoil? Here are a few recipes and food ideas.

Every rose has its thorn, right? The JetBoil Zip is not a perfect camping stove in that it’s limited to boiling water–in theory. For most people, rehydrating dry food for overnight backpacking trips is more than enough. However, if you are used to cooking up stews and frying pancakes, eggs or bacon, the JetBoil Zip by itself is not enough. You can’t put a pan directly on the JetBoil FluxRing, it puts out the flame. I’ve tried. In fact, I’ve managed to cook pancakes over a JetBoil by holding a pan about an inch above the flame but it’s a long time holding if you’re cooking pancakes for four!

Turns out, there’s an easier way to do this. You can get a pot support to use any camping pot or pan you already have in your camping kit. It’s a small adapter that you screw on top of your FluxRing to support any (small) pan or pot on top. The upside is that you retain the heat advantage of the FluxRing while adding frying or simmering-in-pot to your camping cooking options.

It does mean, obviously, that you need to clean this item but I like that JetBoil invented an adapter to diversify the cooking options of JetBoil cooking systems.

One last thing to watch out for. There is no control over flame intensity with the JetBoil Zip and once it’s lit up, you get what you get and that’s very high heat. This means that you can’t simmer or vary the cooking temperature. The heat is so intense that it could even melt the non-stick coating of a regular pan or warp the pan. Be sure to test your pan at home before heading out in the wild (or get a JetBoil fry pan, I bet those are safe).

JetBoil Zip | Don’t Do That!

I thought I’d share some no-no based on my own experience, as mishaps are always more fun and memorable than things going smoothly. 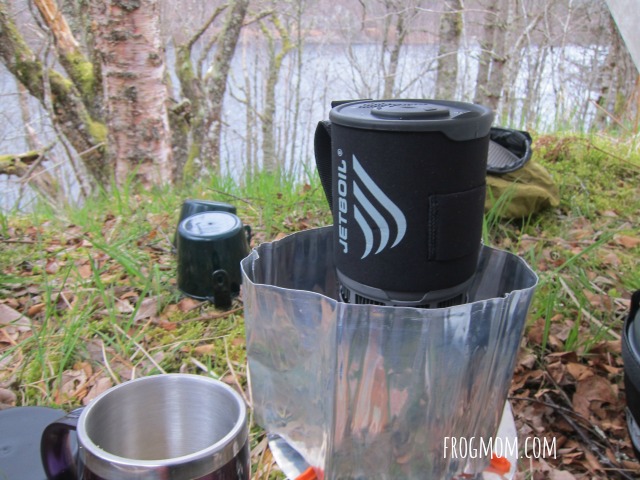 #1 Don’t use a windscreen with the JetBoil

The FluxRing is already designed as a windscreen. When I did (use a windscreen, blame it on windy Scotland), it became so hot inside the windscreen that the hard plastic base of my JetBoil melted. 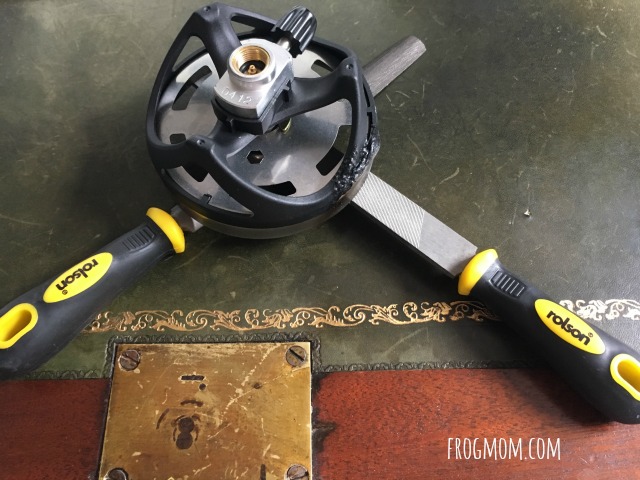 I had to file the melted bit at home very patiently with a metal file, to make it smooth and flush with the rest of the plastic base so it would fit inside the cook pot again. Sigh. 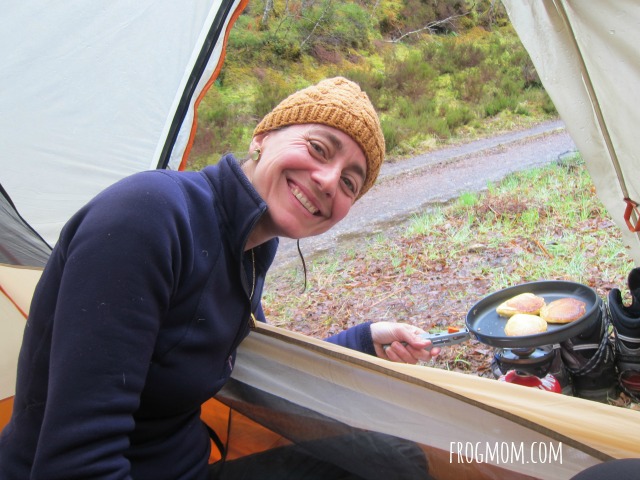 To my defence, it was raining (again) and yes, this was Scotland. It was breakfast time and I was too lazy to get out of the tent and cook soggy pancakes in the rain, but I should have. You know why?

Every camping stove using gas generates a small amount of carbon monoxide, a gas which, as my 13-year-old learned recently at school, is odorless, invisible and highly toxic. Every year, people die from inhaling carbon monoxide. Though I had opened our tent flaps on both sides to ensure proper ventilation, it could have been insufficient.

Don’t be a lazy bum. Go outside the tent, take shelter under a tarp if you must, and cook away from the tent. Along the same lines, never use your JetBoil Zip to generate heat inside the tent. 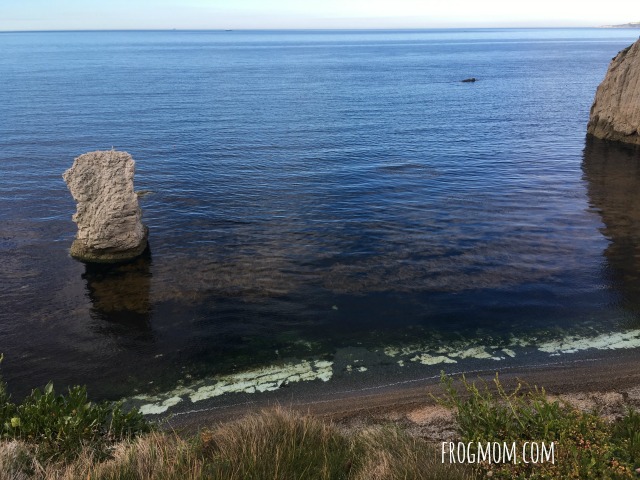 #3 Don’t Turn Your Back on the JetBoil Zip

Now that I’ve got the hang of it, assembling the ZipBoil Jet takes me less than a minute and in fair weather conditions, it’s diabolically efficient. In fact, we were camping on the Dorset coast this summer with a superb view on the sea when I started heating up water for my morning tea. “Come check out these sea weeds!” my husband called. Distracted, I walked over to the edge of the cliff to watch seaweeds roll in and out with the waves. When I turned back, steam was coming out big time of the JetBoil. It was ready! Never turn your back on a JetBoil. You never know how fast water can boil.

I hope that this JetBoil Zip review was informative about this cooking system and that you have a better idea about what the JetBoil Zip can and cannot do. Feel free to share your questions and experiences in the comment section below.