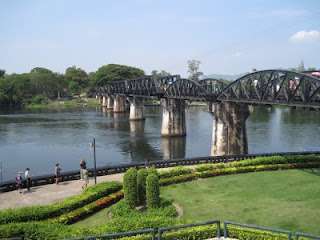 > Kanchanaburi: The Bridge on The River Kwai and Erawan National Park

Kanchanaburi: The Bridge on The River Kwai and Erawan National Park 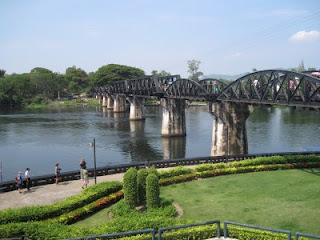 Only three hours west of Bangkok, the city of Kanchaburi is a gateway to no less than five national parks and numerous waterfalls set in surrounding mountains.

However the city draws its reputation overseas from much darker episodes with the Death Railway, the War Cemetery and the bridge over the River Kwai. The Japanese camps of World War II led 16,000 prisoners of war and 100,000 Asian workers to cruel deaths under the scorching sun of Kanchanaburi province to build a railway between Thailand and Burma so that the Japanese could invade Burma and defeat the British Allied Forces. 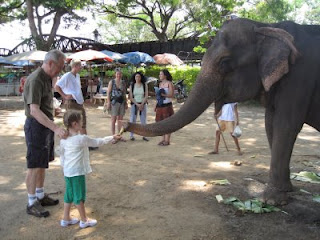 a thriving backpacker scene visits the riverside sites, eagerly crossing the black iron bridge, stepping on each other’s toes and reluctantly giving right of way to others. And for a good reason.

I was amazed at the total lack of safety despite the bridge’s popularity. Walking across the bridge means mainly making your way on of two parallel wooden posts separated by a steel-plated walkway in the middle. Both sides are blatantly open, hiding nothing of the river some forty feet below and crossing is not recommended to people suffering from vertigo or small children. I knew nothing of the “small children” part and led my girls with my father, holding hand 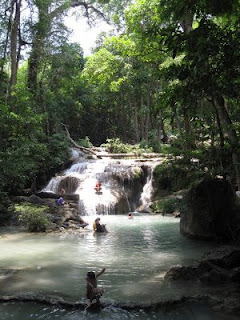 s tight and avoiding to look below.

Once on the other side, we stepped down the bridge to feed bananas to an elephant below. “Look maman, a train!” said my oldest one pointing towards the bridge. I was floored. On the tracks we were walking on just ten minutes before chugged a tourist train on its way for a short ride. That was not expected. Since we were supposed to picnic by the Erawan waterfalls 65 km north and it was already past 11 am, we hurried back the same way and got in the car.

On the way, we drove past the Xen Hideaway Resort whose entrance looked swanky with manicured lawns, but our fate was to swim in cool waters that day. Erawan National Park hosts limestone cliffs and caves as well as the seven-tier Erawan waterfall, one of two famous waterfalls in the region – the other one being Sai Yok Noi.

By then, lunch time was definitely on and we feasted on sticky rice and barbecued chicken, pomelo and baby bananas, right by the first level of the waterfall. All around us, large and small groups mingled and splashed around in the water. Of course, my girls wanted to join the fun too. Alas for them, I had hiking on my mind! 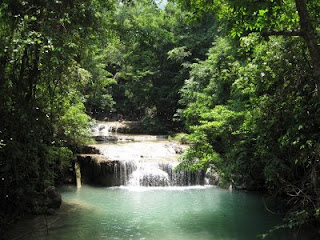 We changed in swim suits and started walking up the trail to see the other levels of the waterfall.

Through a series of bridges we got to the level 2 with wider views and shorter falls, and as at level 1, clouds of butterflies fluttering in the trees. It was gorgeous. The higher we climbed, the less people crossed our way. My girls suffered from the heat, desperately wanted to wade in the water, and got thirsty. Each step up was more difficult for them but fortunately we kept on.

Fortunately because at level 3, we had the pleasant surprise to see groups of young men teasing each other about sliding down big curvy rocks 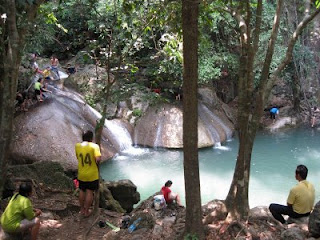 . It was hilarious to see chicks in wet tee-shirts giggling around the boys but not taking part in the sliding revelry. One of the boys, in particular, had to be literally pushed down his perch where he steadily sat. Three seconds and a splash later, all the audience erupted in cheers and claps. That episode brought a smile to our girls and somewhat motivated them to keep going until level 4 and even level 5.

There, unfortunately, it was the end of their hiking endeavors and we dropped our bags by a banyan tree. The water was oddly cool, much cooler than what I expected. It was also weird to sink in the clay bottom. To be perfectly frank, my girls freaked out. First, they’re used 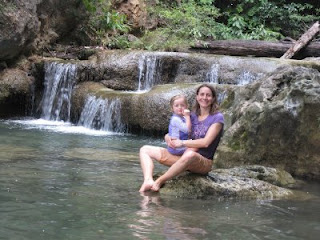 to sandy bottoms. Second, the water was clear and schools of small and not so small fish tickled (or rather sucked on) my feet. The fish part got my girls in tears. They were afraid that I was going to get eaten alive. Ah, little children’s vivid imagination!

Obviously I survived the bath and took along my whiny offspring to cool off as they were as red as lobsters. Getting out of the water, they were startled to have to walk back to our bags on big fallen leaves. They never walk on leaves! Real urbanites. For me, it was a very pleasant feeling.

As the afternoon made its way, we decided to get back to the car. It was a compensation national holiday for Chakri Day, the day that celebrates Thailand’s reigning dynasty. Holidays can mean a lot of traffic in 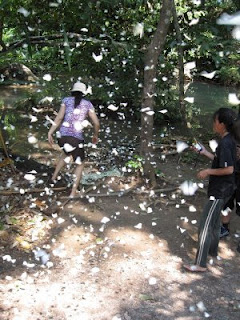 Down by Level 1, we were amazed by the white butterflies that swarmed in the air. “It looks like it’s snowing,” said my oldest one. She was right. In some places, the butterfly concentration was so dense that there were solid white spots on the ground. No wonder butterfly watching is becoming a popular activity in Thailand. It was a gorgeous day trip from Bangkok.

Next time, I’ll spend the night on the river on floating jungle rafts, as many people do.

One thought on “Kanchanaburi: The Bridge on The River Kwai and Erawan National Park”