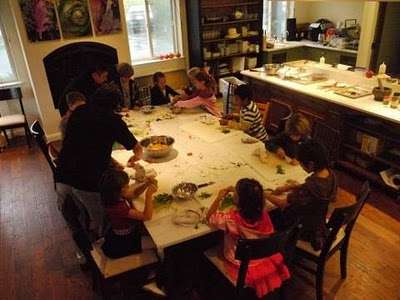 > Kids’ Birthday Party Idea: The Culinary Dude at In The Kitchen

Kids’ Birthday Party Idea: The Culinary Dude at In The Kitchen

For kids who enjoy cooking up a storm, helping out for morning pancakes or evening pizzas, In The Kitchen (ITK) in Sausalito is a dream party place where freedom of cooking is unleashed in its full splendor – something that doesn’t happen at home. In my kitchen, my little helpers pitch in but time constraints and an irrational fear of The Big Mess seriously restrict the range of what I let them do.
﻿﻿

At ITK, kids prepare and cook a meal from scratch, then get to eat it. It’s cooking heaven with a few guidelines. Get this: children even clean up so they can set the table to eat the fruit of their labor. Ever seen that happen at home?
One of my best friends’ 8-year old boy is seriously smitten with cooking and took cooking classses after school at ITK. So naturally for his 8 candles, he decided to celebrate there and threw a Mexican food party. Twelve kids from age 5 to 8 had a ball learning how to hold a knife, cut tomatoes, mash avocadoes, squeeze limes, and cry over the fate of onions. We, the adults, wished we were kids so we could steal some of their food. The cooking smells were taunting our noses but we were brave and watched stoically.

﻿﻿”Don’t call me hey!” started Scott Davis a.k.a. The Culinary Dude. Scott is a great guy and knows how to talk to kids. He addresses them as real little people who understand instructions and who are about to become responsible of knives and food, not as nitwits in need of babysitting.

Scott’s philosophy is all about empowering kids in the kitchen and getting them to listen to the adult in charge. His remark had kids raise their brows and giggle but he had their attention all right. “You can call me Dude, the Culinary Dude, or Scott.” Kids nodded. That was clear.

﻿﻿With that out of the way, Scott proceeded to explain safety measures for the day since the chosen meal involved a good deal of veggie cutting – hopefully not finger cutting. Mostly the instructions were about safety but since everybody sat in a professional kitchen with a professional chef, hygiene wasn’t spared. The no-nos? Well, picking your nose, sneezing in your hands or brushing your hair with your fingers weren’t going to work great with touching raw food. With some extreme booger examples, kids all got the idea and were sent off to clean their hands with soap.

Next started the actual cooking prep. The day’s ingredients were described, as well as the fate they were going to meet: cutting, mashing, squeezing, baking and frying.
﻿

So, how you explain kids how to cut a tomato, the notoriously slippery veggie? Scott explained his great trick about forming bridges with your fingers and cutting inside the bridge, sharp blade down and tip pointing out. Even my five-year old got the knack of it and became a seasoned tomato slayer.

﻿﻿The operations involving knives were probably the trickiest of all but the saddest was by far the onion slicing. If you had seen all the kids rushing to the open window to wipe off their onion tears, you would know the sadness. Only my five-year old was beaming because she was the only cold-hearted onion slicer and watched big kids in tears with a slight grin.
﻿

﻿Next came the avocado smashing with a spatula, a simple task that all performed with great results. How was is that? Any kid likes smashing a soft squishy substance even if it’s green, so that was easy. That was for the guacamole, as was the lime squeezing and onion slicing.

Adding herbs, the next logical guacamole step, had a few kids look worried. Greens? Why yes, said Scott, cilantro is part of the recipe and you don’t have to like it but you’ll need to taste it. There. Eat your greens, kids! And they did at the end, and they all took seconds.
﻿

﻿To enjoy this, the young ones got to make their own corn tortillas from scratch. I kid you not. They made the dough, rolled balls in betwen their hands, flattened them with their hands and actually took turns frying them over the stove.
Oh the line to fry your own hand-squished tortilla was an impatient one, moving slowly and loaded with great expectations. Were they going to turn brown right away? When was I going to eat them? Frankly, I don’t know how the kids refrained from eating while cooking.

﻿This party was a real patience test for them because when they got to frying the tortillas, they were still 20 minutes away from eating. The table needed cleaning up and their hands too. Also the tacos needed to be baked crips in the oven.

Everybody took turns brushing their tacos triangles with oil and placing them (rather neatly I must admit) on baking trays. The oven had been pre-warmed and an adult helped put the loaded trays in the oven. Since the meat had been pre-cooked by Scott, all that remained to be done was the cleaning up and table setting.

I’ve never seen kids so eager to clean up. They must have been starving and drooling over their meal, all proud to have made everything from scratch. Both boys and girls picked up food scraps from the table and off the floor, sponged up the table and brought plates and cups to the table for the Mexican feast.
﻿

﻿Needless to say, they ate with gusto. Err, there must be a word for children wolfing down a meal. Tomato salsa, guacamole, tacos, tortillas and ground chicken and beef disappeared in their mouths without many words being exchanged. A long silence of satisfaction accompanied their meal, the only noises consisting of spoons clinking on bowls and dishes being passed around. These were happy kids.

﻿This was not the end of their culinary delight that day, as my friend has skillfully crafted a birthday cake as a stovetop with spaghettis overflowing from a pot and eggs frying in a pan. She had even shaped knobs on the stovetop and surrounded the cake with tiny apples,, strawberries and grapes for good measure next to the sugar overdose. It was great!

When I was seven or eight, my first solo cooking experience was making crepes for my mom when she was visiting a neighbor. I made the dough, filled the pan with oil and right when I was going to fry (deep fry) the crepes, my wrist caught the pan’s handle and it fell off the stovetop. I tried to catch it with my hands and fried my hands instead. This is how I learned that pan handles should not be facing towards me when cooking – and that having an adult nearby when using the stove is handy.

Clearly, learning cooking skills with a professional is a lot more fun when you’re a kid – and a lot less painful. Hurray for The Culinary Dude and kids cooking their food, safely!

2 thoughts on “Kids’ Birthday Party Idea: The Culinary Dude at In The Kitchen”