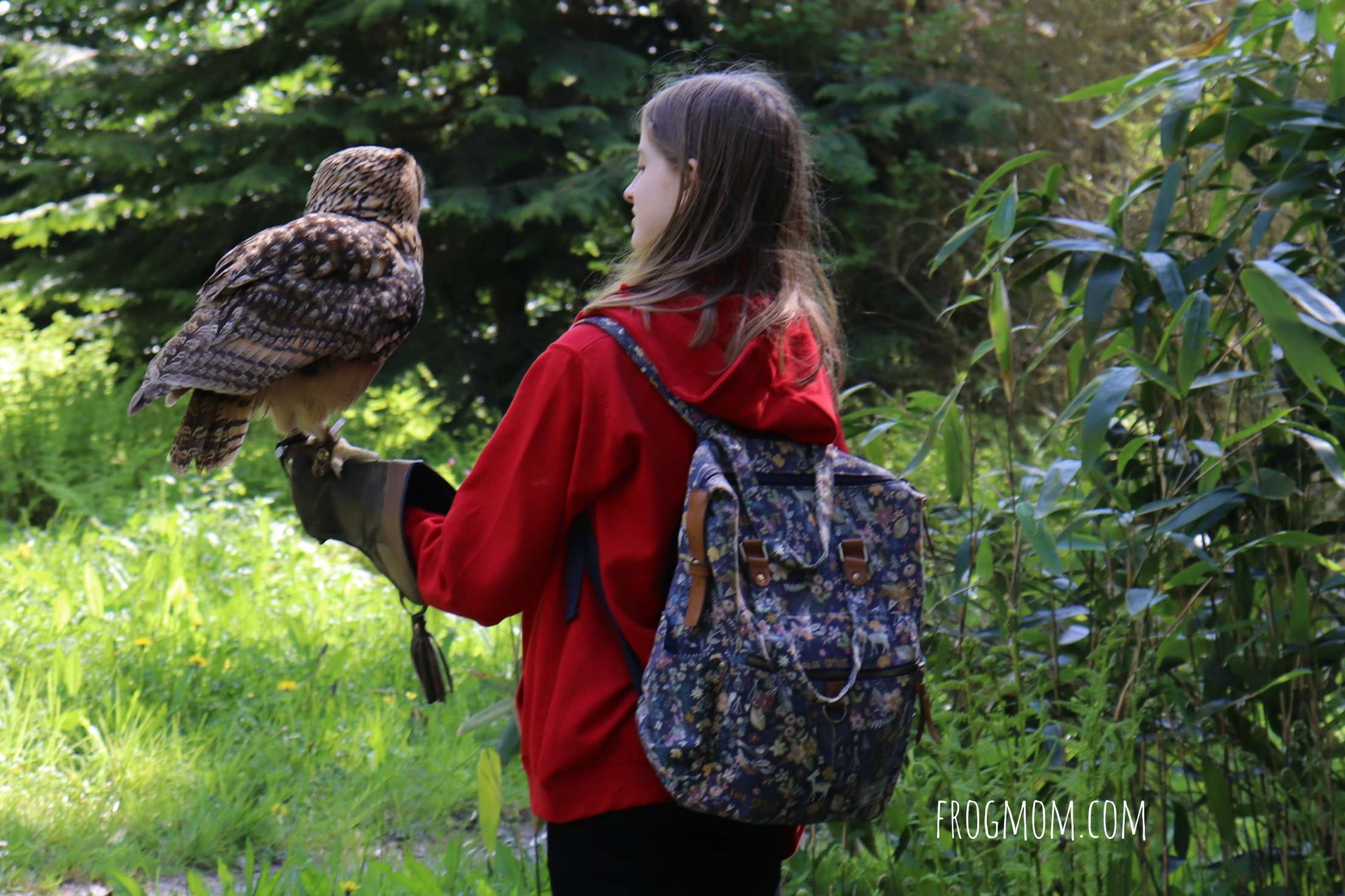 > The Secret Owl Garden: Where Kids Can Touch Owls & Learn About Them

The Secret Owl Garden: Where Kids Can Touch Owls & Learn About Them

Thanks to Harry Potter and Guardians of Gahoole, kids have no shortage of owls to love. However, very rarely do they see owls in the wild, let alone in cities where kids live and play. The zoo is usually the only place to see owls and that’s depressing because I don’t like animals in captivity and neither do my girls. What’s the next best thing, then? An owl sanctuary is the next best thing. When my husband’s aunt learned that we were coming to visit her in Wales, she booked an owl experience at a local owl sanctuary for all of us. You’ll like it, she said, your kids can touch the owls and even feed and fly them. Seriously? 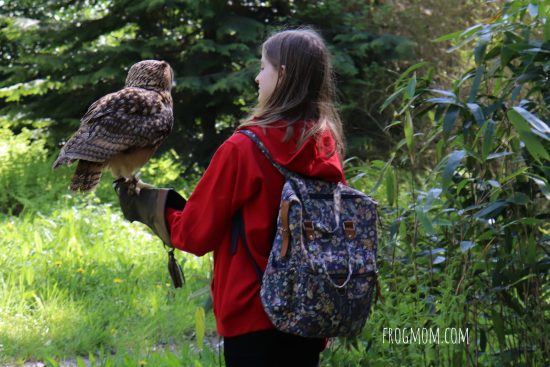 When we arrived in Pembrokeshire after a very long train journey (the delights of railway maintenance on bank holiday weekends), we were thrilled that the weather was so nice. The sun was out, it was tee-shirt weather and the countryside was lush with tender spring green colors. Everybody outside! Well, I had somewhat forgotten about the owl experience. Darn it. You see, I envisaged a group talk with an owl in the middle that everybody petted in turn and other owls waiting in line to be displayed.

The signage to the Secret Owl Garden was a bit dated, borderline cringy and promised nothing scientific or educational. What was with the granny cursive font they used on the tree? 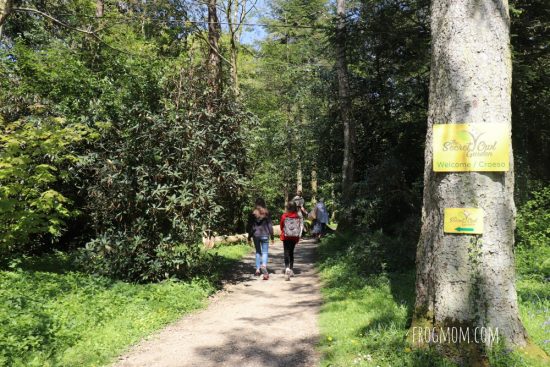 While we proceeded down the trail to the Secret Owl Garden, I admired the beautiful trees around us. My husband walked inside the visitor center and immediately came back out.

“Girls, there are baby owls you can pet!”

In two seconds, my girls had dashed away and disappeared.

Inside the visitor center, my girls and other people were oohing and aahing over a box on the counter. Oh, how fluffy the birdies were. 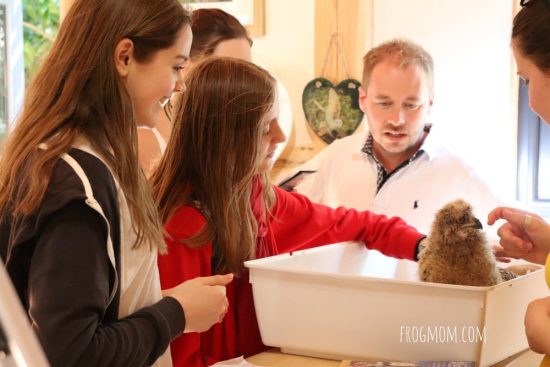 There were two “baby” owls in the box but they didn’t exactly look like babies. One was a month old, the other one was 6 weeks old. The thing is, owls grow extremely fast and those were almost adult size despite their young age. One of the owls drew surprised laughs from everybody and was clearly different. I had to see this. 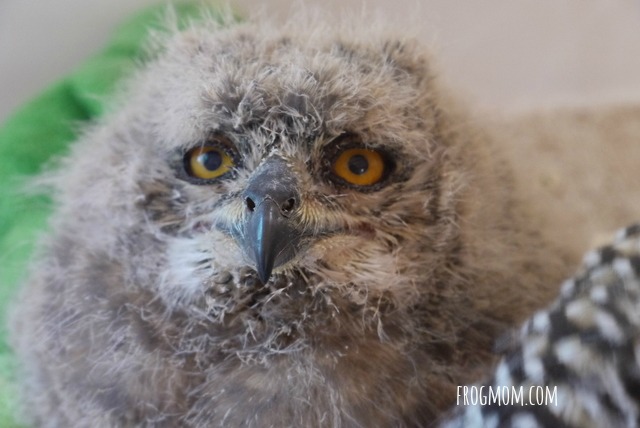 Or Frumpy Owl, depending on your mood. It was an African Spotted Eagle Owl, only a month old and looking supremely confused. Wearing soft fuzz all over its body, it was quite adorable and my girls couldn’t get enough of it. They started asking questions about the size of baby owls, the type of owl it was and other things. They were already learning stuff about owls and we hadn’t even started the Owl Experience. I started to really warm up to the idea.

Before our “owl handler” came, we wandered around the owl sanctuary, looking at owls in wooden cages. They all seemed pretty happy (as far as my human eye could eye) and on side panels, we could read explanations in English and in Welsh about their behavior, habitat and distribution. 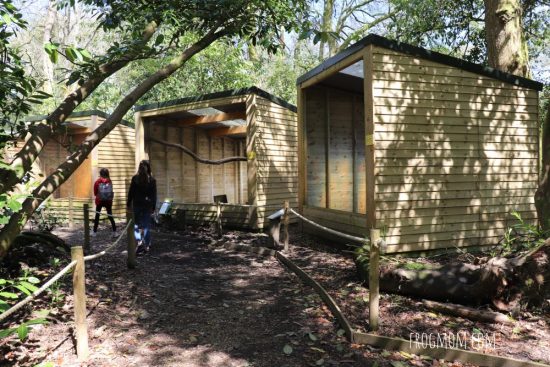 They all had names, which to me was odd because wild animals don’t have names. Just how wild were these?

Our owl handler Linda arrived, in front of the aptly named Siren.

Siren was a very small owl weighing 100g (less than 4oz) with feathers and tracker. “It’s all feathers,” Linda exclaimed and apparently, the owl was barely bigger than a mouse body under the feathery mass. My youngest daughter put on a leather glove and volunteered to feed her first.

Look where this got her. 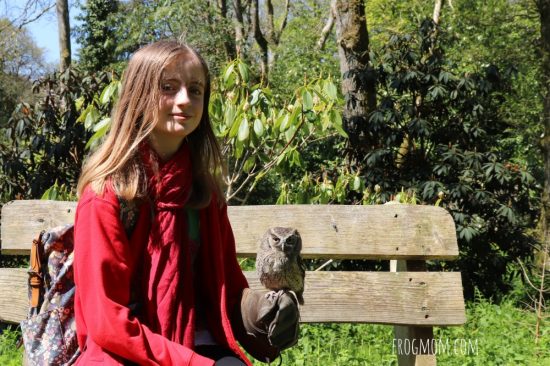 Siren being a young owl, was still learning of the trade, including when and how to respond to humans calling her name for food (or a cute photo opp). She was particularly fond of this bench and kept flying back to it before coming back for more bites of fresh mouse. When on our hands, she was so light that we barely noticed she was there. She was really feather light.

I have mentioned earlier than owls grow extremely fast. Well, get this. Each day, Siren is fed 20g of fresh mouse. That’s 20% of her body weight in pure proteins. Can you imagine eating 20% of your body weight in meat (or veggies) every day?

I’ll let you ponder that one out.

Our second owl, who I’ve decided to call our medium owl, was called Hinge. I think it had to do with the fact that it was lopsided and kept breaking its tail while standing.  It also got its name because of the sound it made when calling for food. Anyhow, Hinge was 150% bigger than Siren but still relatively small. It was a funny owl that was very responsive to mouse bits but somewhat skittish, except on my hand.

To illustrate this, I tried to do an owl look with Hinge on my glove. Here goes. 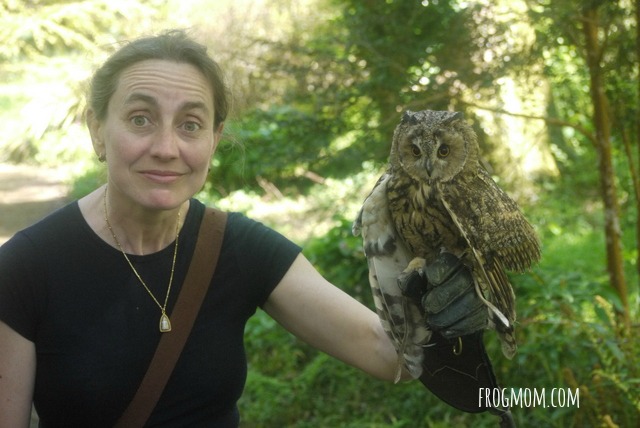 Like many owls of the Secret Owl Garden, Hinge was a rescue owl and was living a much better life now than before it came here. We learned about eye/retina color in diurnal and nocturnal owls, as well as flight range, before moving on to the piece de resistance, our last owl.

Ozzie was not an owl to mess with.

When we were waiting for Linda to pick him in its cage, Ozzie gave us a mean look while screeching and hissing, clearly indicating that it was not taking any BS from us.

Fine. My oldest daughter said, “I’m not taking this one on my glove.” She’d read the panel indicating Ozzie’s weight – 1 kg (over 2 lbs). We were upgrading the owl experience to the XXL version. 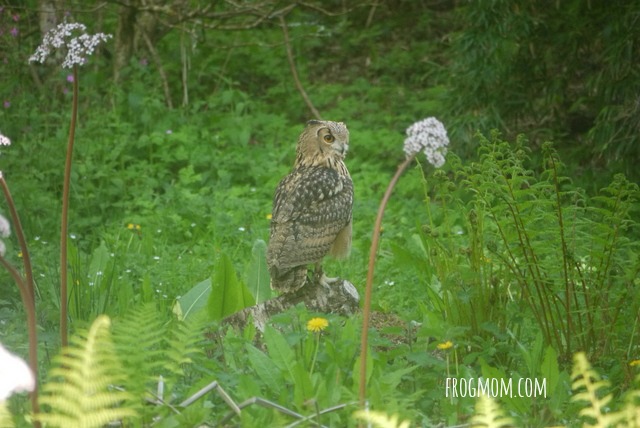 Here is Ozzie. Ozzie, a rock owl, was a no BS bird. Here it stood, regal, on a stump, absolutely refusing to respond to any form of bribery to land on our globes.

Showing the mouse leg fuzz, “Ozzie, your last chance. We’re out of here.”

Finally, Ozzie made a move. A swooping move, that is. 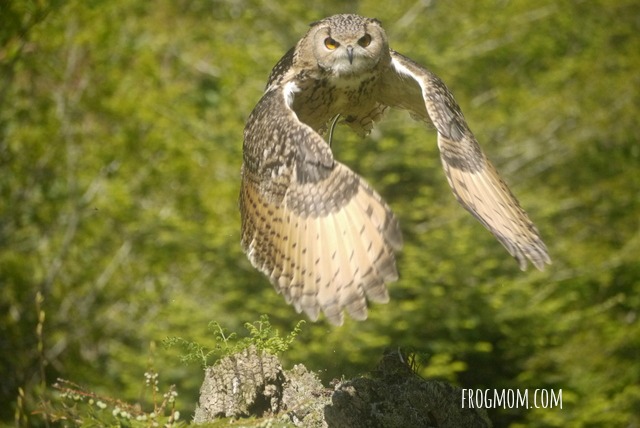 Ozzie tried to steal the fuzzy leg (that I was holding tight) and fly away. Damn it, Ozzie. You won’t get away with bad boy behavior!

I hung on to the mouse leg and Ozzie tried three more times to swoop down in successful mouse leg robbery, defeated by the mighty leather glove every time.

Finally, Ozzie gave up, swallowed its pride and came down on the glove for 2 seconds for the photo, before flying away.

“Ozzie has just done three weeks of easy castle work,” explained Linda. “This is more difficult, Ozzie is trying to get away with this.” Man, don’t you hate it when owls do easy castle work and look down on you?

We all got to hold and feed Ozzie but Ozzie was not an easy bird to handle, though never agressive or scary.

Ozzie concluded our Owl Experience. We all came back, extremely enthusiastic about owls, to the visitor center and more owls, including Kodiak.

Harry Potter … is Not Dead

In Harry Potter, Hedwig the Snowy Owl becomes Harry Potter’s designated owl to carry messages between wizards or muggles. After Harry Potter, breeders from around the world were swamped with orders for snowy owls. A little girl asked for an Hedwig owl pet at Christmas and she got it.

Only this live owl lived in a small cage in the little girl’s home. It was too small.

The owl broke all its wing feathers. Broke its tail. Lost its appetite for life and therefore lost its appeal to the little girl.

The owl was rescued and became Kodiak. 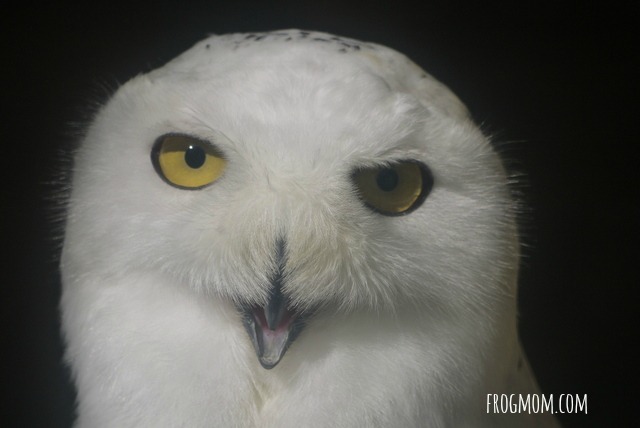 Do you think that owls deserve to live in small cages in people’s homes? I don’t. I think it’s terrible and I’m glad that places like the Secret Owl Garden exist to rescue them and educate visitors on the world of owls.

The day was nice and we hung around the cages at the end, lucky to see yet another small owl out of its cage. Here it is for you. 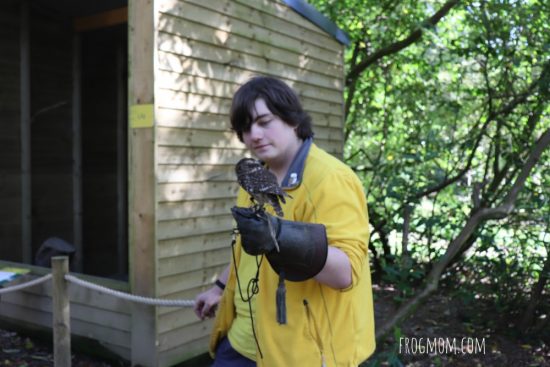 If your kids like owls, this place is a great day out and the castle grounds have a fantastic kids’ adventure playground for older ages. I highly recommended it for families who want to do something different with a purpose.