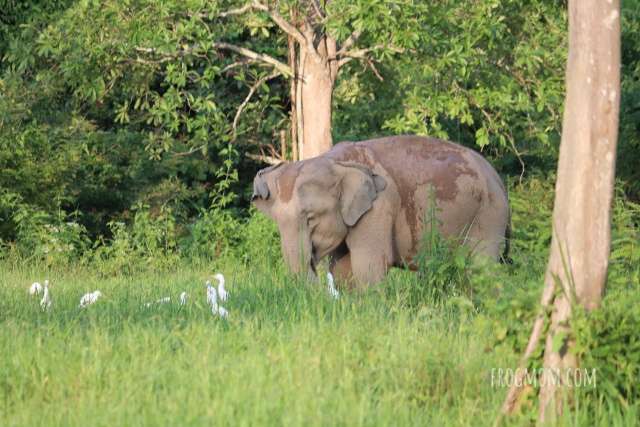 In October 2019, while staying in Hua Hin in Thailand with my 14-year-old daughter, I looked for local national parks as day excursions. Less than 3 hours from Hua Hin, Kui Buri National Park was known to be a great spot to see wild elephants. A friend of ours had recommended the park although on his trip, he didn’t see any elephants. “That’s because they come after 2pm and we visited in the morning,” he said. I reasoned that even if we didn’t see any wild elephants, Kui Buri would still make a great day out in the Tenasserim Hills Range straddling Thailand and Myanmar.

And so, it was decided.

We left Hua Hin after breakfast and started driving south, planning a stop en route to a wildlife refuge on the coast.

It was my first time at Pranburi Forest Park, let alone anywhere on that stretch of coast. Despite living in Thailand in the 1980s and visiting my family regularly since then, I still have a lot of places to explore. In the past 10 years, I’ve focused mostly on the Andaman Sea’s Mu Ko Surin Islands and Koh Phra Thong, on Surat Thani’s Khao Lak and  Khao Sok National Park and on the eastern side of the Gulf of Siam, on Koh Chang and Koh Mak. My last trip to the western side of the Gulf of Siam probably dates back to the late 1980s. Of course, things have changed and I was very excited to discover Pranburi Forest Park, a coastal wildlife reserve created in 1982. 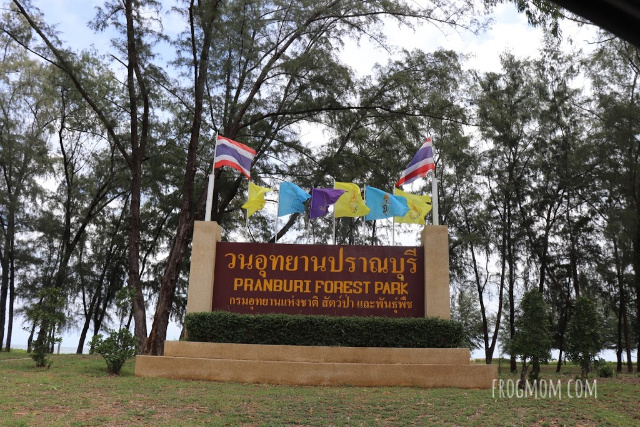 This nature park is nothing short of a small miracle on a coast that has been virtually destroyed by money-hungry developers. It’s a rare natural habitat left untouched and a real breath of fresh (moist humid hot) air. After passing some pretty ugly block buildings, our road ended at a parking lot and in a couple of hours, we were able to explore both habitats — the electric green mangrove and the elevated boardwalk… 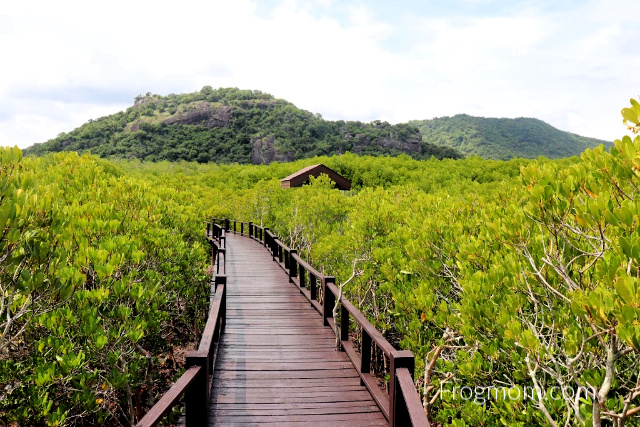 … with its gazillion scurrying crabs (here, sesarma mederi, a mangrove crab that feeds on leaf litter and is found under tree canopies)… 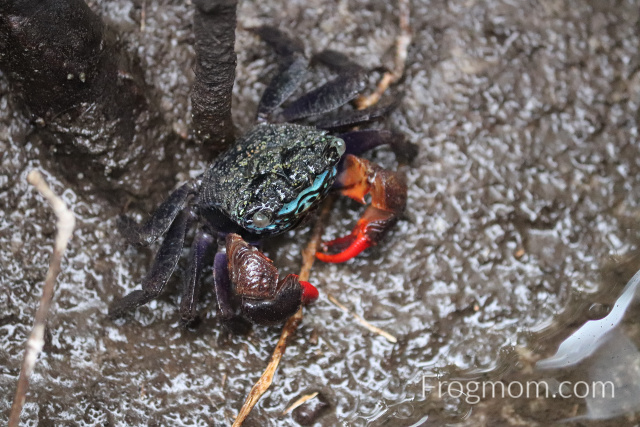 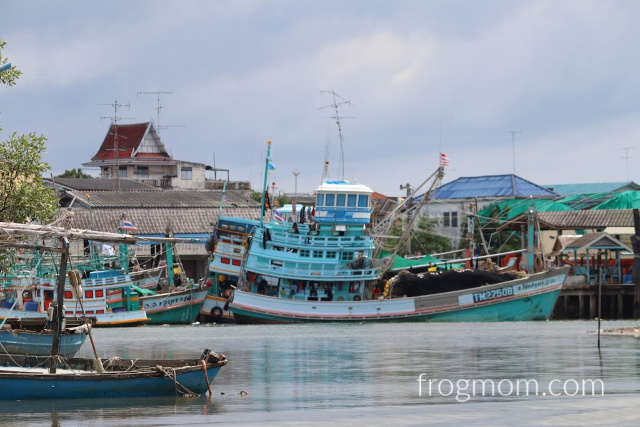 I digress but it was really beautiful. I also love mangroves because I grew up near one in New Caledonia and these formerly widespread habitats have been rapidly disappearing. I’d like to quote a scientific paper titled “The effect of environmental and disturbance factors on the presence of different crab species in Pranburi Forest Park, Thailand” by Johanna Rosenquist from Uppsala University (2017). She writes, “The mangrove forest is one of the world´s most threatened ecosystem today. The loss of habitat comes from rivers being dammed and the water being redirected. Mangrove forests have decreased significantly in Southeast Asia over the past 40 years. The main reasons for the decrease in Southeast Asia have been urbanization and population pressures from humans, conversion to agriculture and salt production plus wood extraction.”

In a nutshell, mangroves need to be protected and that’s why Pranburi Forest Park is really worth your visit.

By the time we returned to the car, it was almost lunchtime but Pranburi doesn’t have much in terms of lunch so we pushed on along the coast to Dolphin Bay where my brother Lionel had recommended the Dolphin Bay Resort. 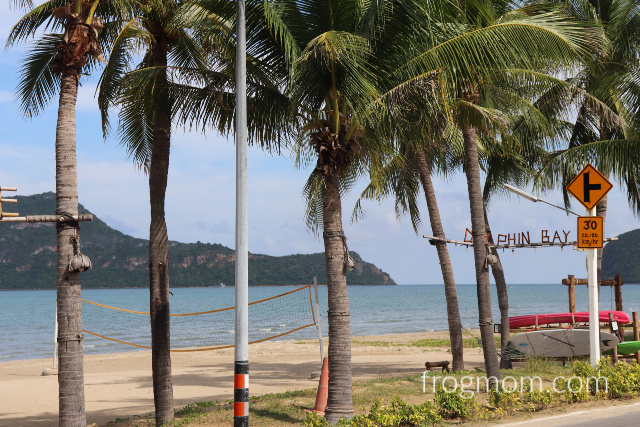 The restaurant was desert — a regular feature of dining out in Thailand — so we picked a table beachside, with a gorgeous view on the sandy bay and its swaying coconut trees (slight breeze). It was genuinely nice and had my girls been younger, this family resort would have been perfect for them. As is, we had an excellent lunch (pad see-ew and pomelo salad, with fruit juices) before hitting the road again.

“You will find that these hills are farmed with an alternating pattern of pineapple fields and gumtree forests,” my dad has said. He probably added something to the effect of preventing soil erosion or complementary crops with the right pH but I forgot. 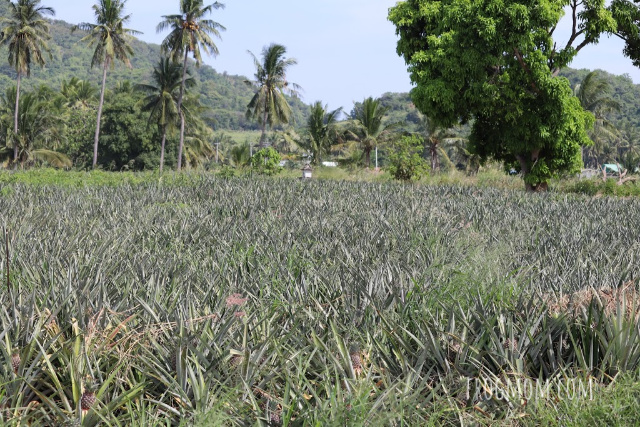 Sure enough, we passed field after field of pineapples ready to be harvested (it’s a popular crop in this part of Thailand) and later on, when going inland, drove past quite a few gumtree plantations in between hill-side pineapple fields. My dear Papa, who headed a sustainable agriculture non-profit based in Bangkok, sure knows his farming maps.

What with our many stops along the way and rough road (plus military roadblocks) to the park, we didn’t reach the ranger station until almost 4pm. In the tropics, the sun sets every day at 6pm sharp and 4pm is practically the evening. Were we too late? I rushed inside the ranger station. Fortunately, the ranger on duty could arrange a guided tour for us and two Dutch backpackers offered to join us to split the costs. Deal done. 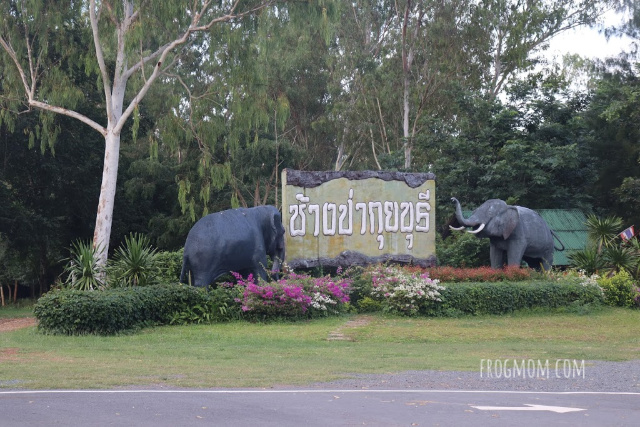 I looked at the park map. 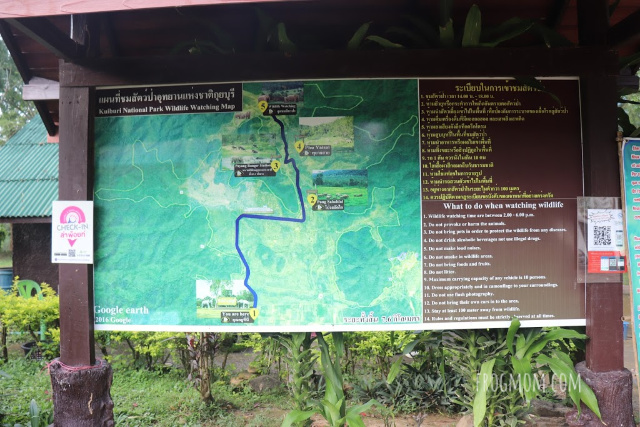 Only one road and four view points. That should make things easy. We left our car behind and climbed at the back of a safari pickup truck. My daughter was excited and so was I. 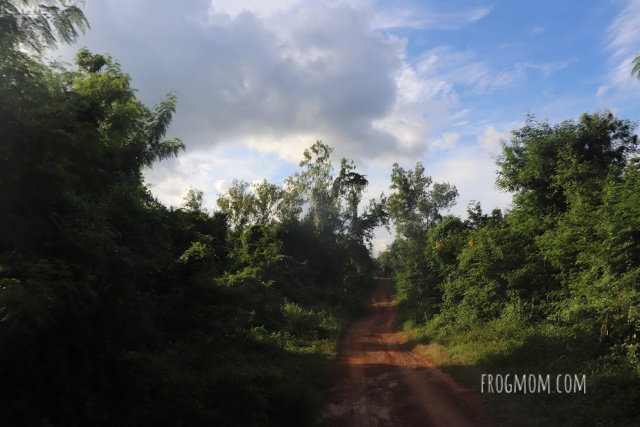 The road was muddy from recent rains, red from iron ferrite and slightly potholed from, well, too many safari pickup trucks – I think. Already, I was relieved that we left our small compact car at the ranger station. No way we would have made it out of this muddy mess. Looking around, we enjoyed the vegetation dark green and thick with trees and unruly vines. 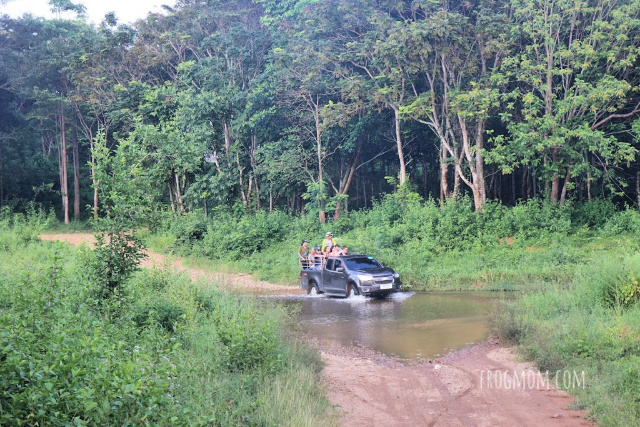 After 10 minutes, we came upon the first river fording of our wild elephant safari. OK. Now I understood the safari pickup truck. It was not just for show. We forded another river 10 minutes later and climbed to a sort of flat plateau. On the way in, we must have passed 3 or 4 other groups. Each time, our guide asked to the other guides where we could spot elephants and each time, they replied that there were none now and that we needed to drive further in (all in Thai – thank God for the Thai lessons I took right before the trip). 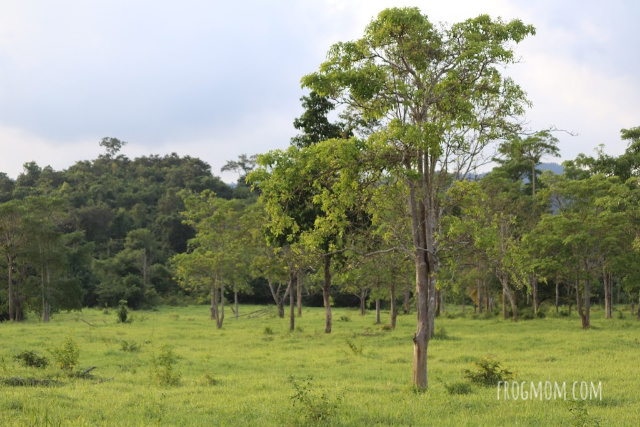 This plateau was different from the dense forest we’d just crossed. Literally – where were the trees? It looked so neat. Had it been cleared on purpose for elephant spotting? How come the ground wasn’t covered in low bushes? I wish my Thai had been good enough to discuss the flora but I was quite limited to big mammals and a few common birds, so stuck to that.

We passed two different viewpoints. No elephants. Perhaps we would see none? I was being wildly philosophical with my daughter and we were telling each other how nice this safari was even without big pachyderms.

Then, oh then, we got lucky. 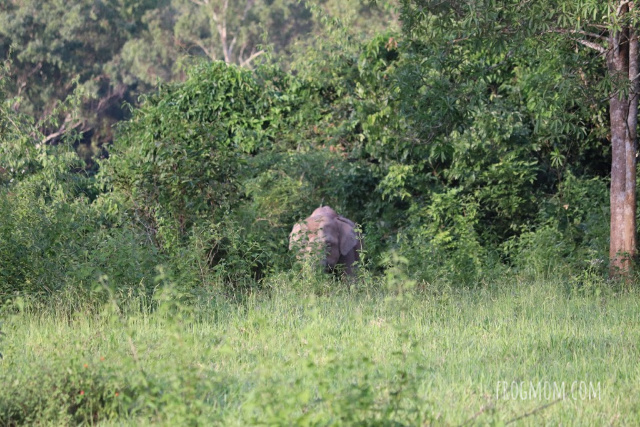 That’s the Thai word for elephant. To be precise, we were in front of an Elephas maximus indicus or Asian elephant. Kui Buri National Park is known to host a population of about 300 wild elephants and we had just found one. Our pickup truck stopped and I zoomed in on the elephant like a maniac with my camera (why oh why did I leave the binoculars in Bangkok?). I prayed silently that the elephant would stick around a bit, that it wouldn’t be scared by our presence. That’s the beauty of wildlife, they’re unpredictable. Our driver had killed the engine, which was great, and the four of us (plus guide and driver) just stood there in awe, watching the lone wild elephant. 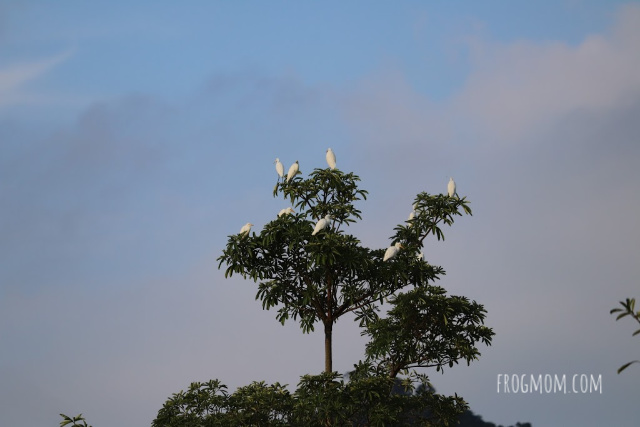 On a tall tree nearby, a small dozen of elephant birds had gathered. One by one, they had landed on the crown of the tree and suddenly, they all took off. Where to? 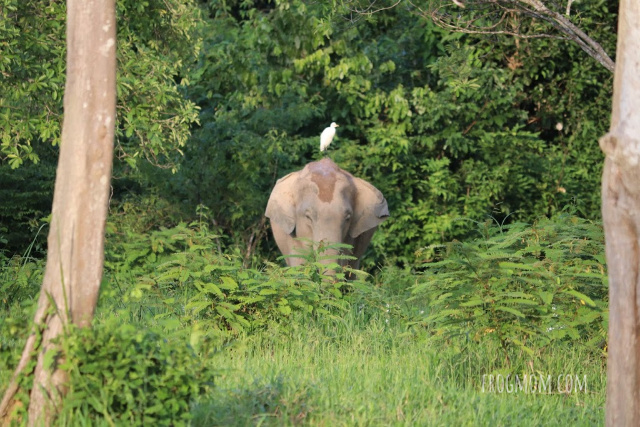 A first egret landed on the elephant’s head. Ooh, that explained. It was one of those “cattle egrets”, the sort that keeps company to big mammals. A second egret arrived and soon enough, the whole colony was walking along with the wild elephant, slowly advancing and munching on tall grasses in the forest. Did you know that, classified as megaherbivores, Asian elephants consume up to 150kg of plant matter per day? Yes, that’s a lot of grass and believe me when I say that every step meant a mouthful of grass for this gentle giant. He was such a glutton! Bending its head, the elephant coiled his trump around bunches of tall grasses, pulled and brought the grass to its mouth. Again and again.

On the bird front, I was excited. I had seen such cattle birds living in symbiosis with big cattle but this was the time I saw a bird-mammal partnership in real life. After 20 minutes or so, our driver suggested that we go further to try another viewpoint. The sun was already going down and we needed to leave. Much to our regret. 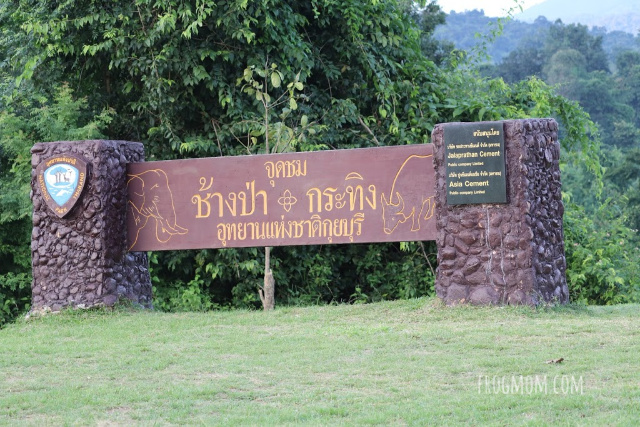 We reached the furthest viewpoint in the park and as indicated by the sign, this was our chance to spot wild elephant as well as gaurs, which are the fourth largest mammal in the world and resemble furry water buffalos. We got off the truck and walked to a small log fence at the edge of the hill. 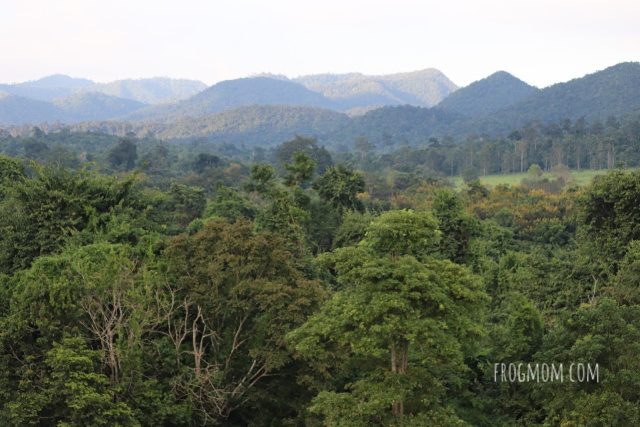 Oh, what a view. I wish there was a way to share with you a 3D picture showing the different depths of field — the far mountain range in the back, the grassy meadows in the middle, the tall trees in the foreground. It was breathtaking and again, a flora guide would have been heaven. 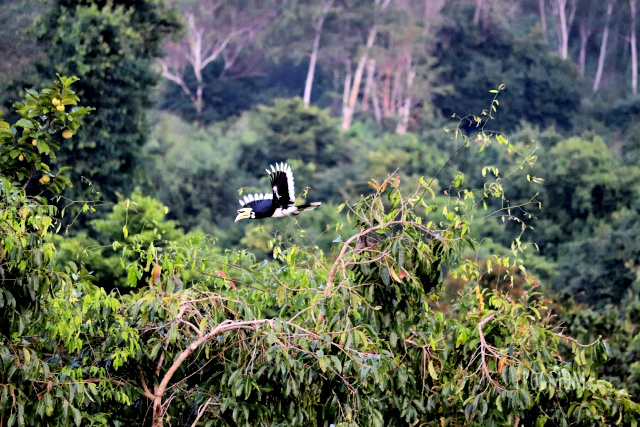 Our guide spotted an oriental pied hornbill (Anthracoceros albirostris นกแก๊ก) flying from tree to tree a couple hundred meters from us. Quickly, I zoomed in as much as I could with my 300mm lens and managed to capture the bird in flight.

Wait. What was that in the distance? 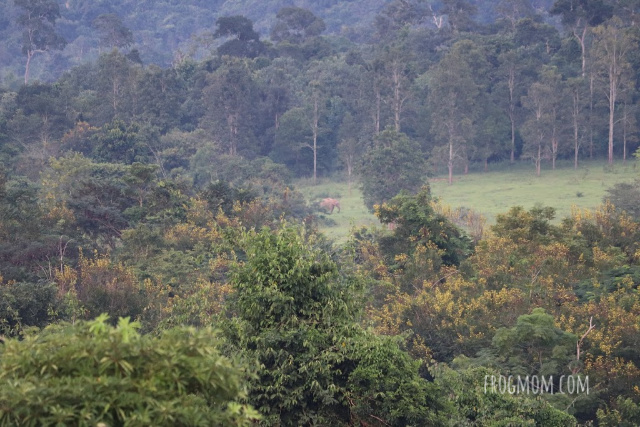 The light brown spots, they were wild elephants. We decided to wait a bit. We could afford to spend a few minutes at this viewpoint.

Out the herd emerged from the tree cover. 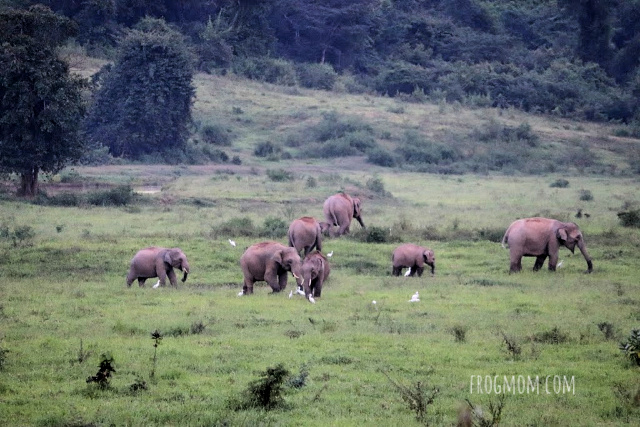 We counted almost 10 wild elephants moving as a herd and of course, a dozen of these elephant egrets who must have been over the moon to be in such good company.

“Five minutes,” our guide told me, “We’re leading in five minutes.” I passed on the message to our Dutch friends. Like us, they took pictures and a few videos. Finally, we were asked to leave.

However, our wild elephant safari was not over yet and… 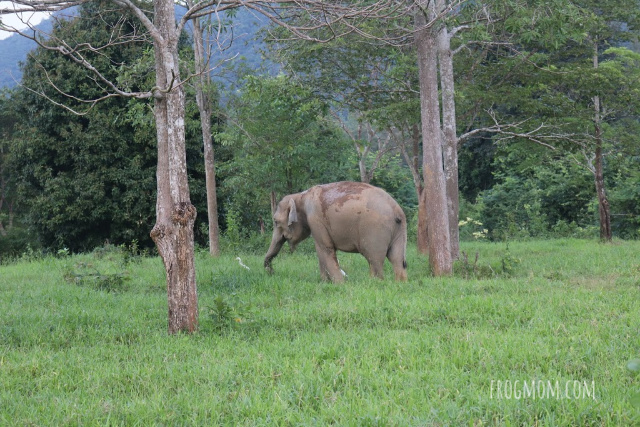 … we found the same little guy who we’d met earlier! He still had his egret sidekick and together, they were feeding away. Maybe that was reason there were so few bushes on the plateau? It would make sense that constantly uprooted by elephant, young trees would have a hard time making it to a decent “non-munchable” size. This was pure speculation on my part, though. I really had no clue.

As the sky was getting darker, we didn’t linger and slowly returned to the ranger station.

By the time we made it back to Hua Hin that evening, it was way dark and I drove as fast as I could, expertly guided by my daughter. We had been so lucky, this was an incredible adventure.

Wild elephants roaming free. Who would have thought?