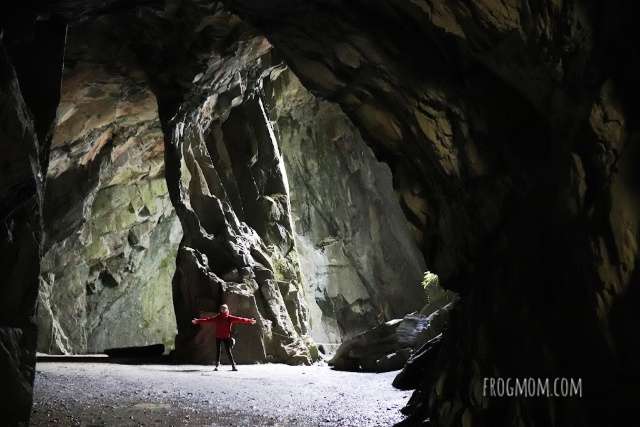 During the February school break of 2019, we escaped a weekend to the Lake District and these two days felt like a a real breath of fresh air. As a big bonus, I wrangled two carbon-neutral circular itineraries starting and ending where we were staying, meaning we could walk all day long without relying on fossil fuel transportation.

The first hike, the longest at 22K/13.6 miles, took us from Ambleside to Elterwater and around the hills through slate quarries and an amazing underground trail section in a former slate mine. The amazing Cathedral Cavern was not quite Mines of Mordor material but it reminded my 13-year-old of the training cavern in How to Train your Dragon and that was way cool.

What’s more important, this was the first big hike we’ve done since summer 2018 with our youngest who suffers from anorexia and who loves spending time outdoors, so it felt like a mini victory.

Here is how the hike unfolded.

Waterhead to The Apple Pie in Ambleside

We were staying at the YHA Ambleside in Waterhead and after breakfast, we laced up our shoes and headed north along the lake shore. The Youth Hostels is literally steps from the Ambleside Pier where ferries take day-trippers across Lake Windermere and at 9.30am, a small queue was starting to form. 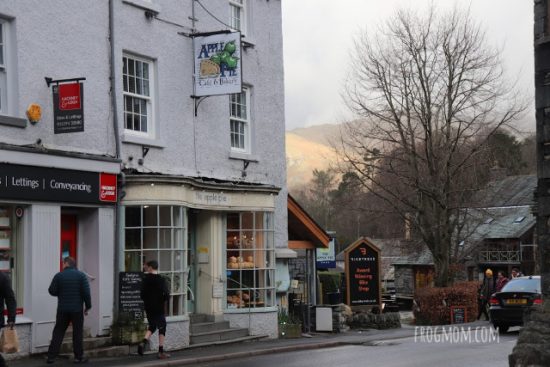 First things first, we started with a trip to The Apple Pie bakery in Ambleside, a lovely place where we return time and time again. Not only is the bakery/café quaintly adorable, but they make Chorley cakes, most excellent raisin-studded shortbread perfect to refuel during a hike (or after a swim). For my youngest daughter, we bought a traditional apple pie – it’s their specialty after all. Once we were loaded with pastries, the walk began in earnest.

As we were trying to do a carbon-zero weekend, we decided to walk to the trailhead rather than hop on a bus to the tiny village of Elterwater. 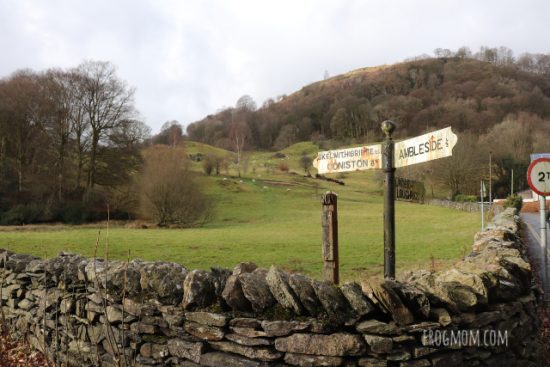 From Ambleside, we followed the road and walked in a line as it’s a busy stretch and a narrow road too. Hikers sometimes have to share the road with passing cars. It was a mostly uneventful walk except that we couldn’t talk to each other much, which wasn’t enjoyable. 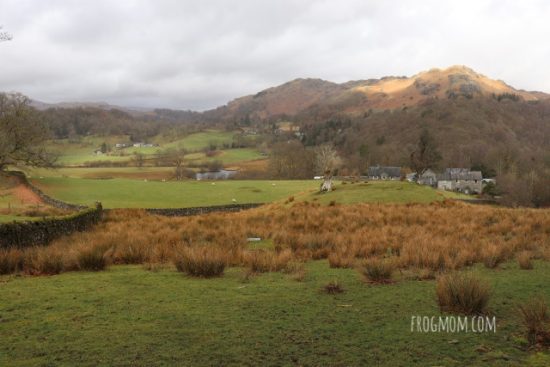 A tiny hamlet on top of a ridge had a surprise in store for us. As befits a rural community, one of the village houses offered eggs for sale on a table outside with a small box on the honor system. We are suckers for rural eggs during hikes and bought two boxes, leaving our coins in the honor box. 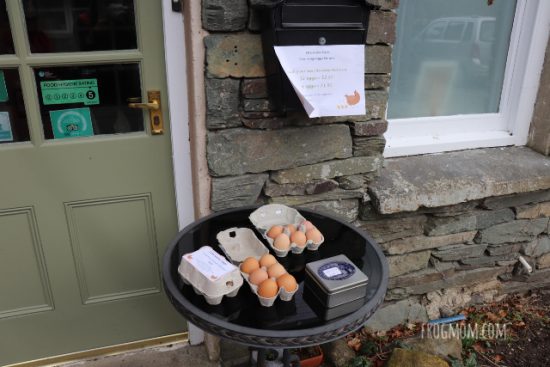 Right outside the hamlet, a slate engraved by the Skelwith Parish Council showed local peaks from that view point. It was pretty cool. Though the sky was still overcast, we were hopeful that the weather would improve and when we reached Skelwith Force, a nice strong waterfall, we sat down for a bit to enjoy it. 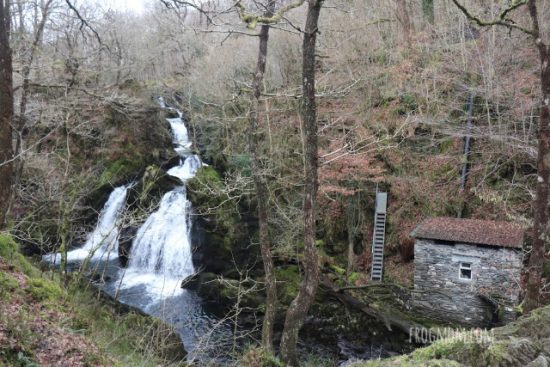 Though small with only a 16 foot drop, Skelwith Force is where the combined waters of the River Brathay and Langdale Beck thrust a dramatic passage through the rocks and in the rainy season, it’s not a waterfall to mess with. My daughter loved the sound of the rushing water so much that she wanted to picnic there and then, but I wasn’t such a fan of the wire fence. As a result, we strayed off trail a hundred meters to a hilltop and sat down for lunch.

Picnic with a View

For both my girls, lunchtime is always a highlight of our hikes as we like to picnic and make the experience memorable. That day, I had decided to emulate some tempting pictures I’d seen posted on a wild camping group on Facebook and instead of a cold packed lunch, I had carried half our kitchen equipment to cook a real meal on a camping stove. 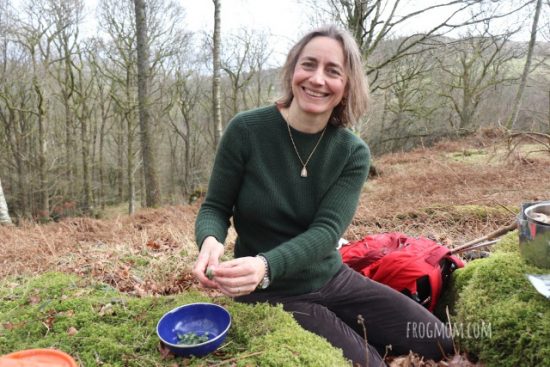 Here I was, shredding sage leaves before stirring butter beans in a stainless steel pan with garlic, sage leaves and pork sausages. Setting up the camping stove was easy and through the glass lid, we watched our meal warm up with a growing appetite. 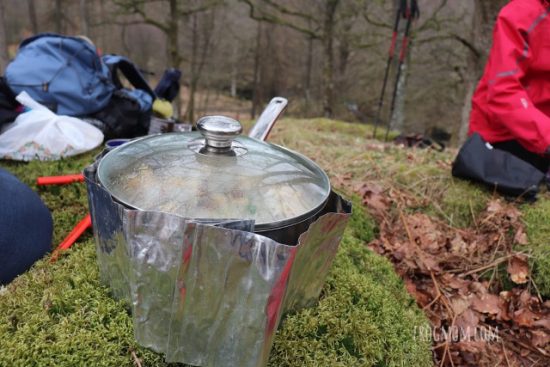 Meanwhile, my daughter was experimenting with her new camping stove, a JetBoil MiniMo whose most exciting feature was a self-ignition switch. By the time lunch was hot and ready, she had tea ready for us too. Win win!

After lunch, we crossed a few fields to get back to a river and right before Colwith Force, a stunning waterfall with a 55 foot drop, we stumbled upon this bizarre wishing tree studded with small coins. 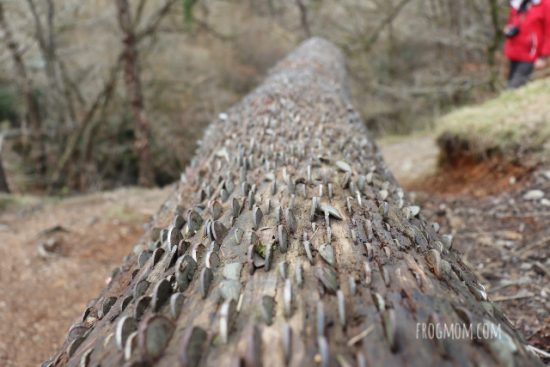 I’ve never seen such a tree but small coins had been pushed inside every little crevice of the fallen tree and there were a few recent shiny coins too. Is this for good luck? Why would people do that? It was news to me.

We followed the well-marked trail to Stang End, a farm, where we turned onto a lane that become a rough track and after a while, we got to Hodge Close – a fraction of a tiny hamlet. Opposite a building signalled as The Old Forge, we walked down a country trail and got to the slate quarries.

This part of the Lake District’s industrial past is fascinating to see. As early as the Middle Ages, slate mining and quarrying has kept the local economy busy, as evidenced by the many slate stone walls and slate roofs of traditional Lake District homes. 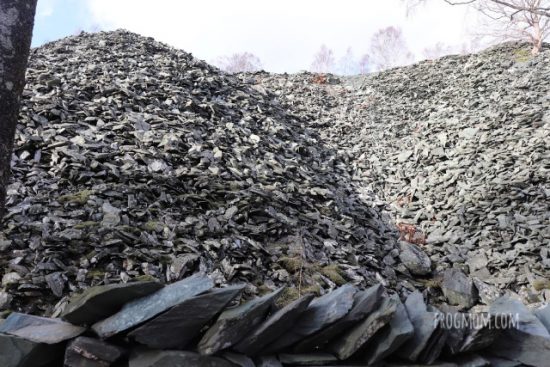 Now, we were getting close to Hodge Close Quarry, one of many slate workings in the Tilberthwaite Valley, between Langdale and Coniston. This quarry was worked on a large scale from the 19th century to small scale in the early 1960s. We started seeing “spoil heaps”, hills made of unused slate slabs and peppered with rusty abandoned mining equipment. It was quite impressive and soon we reached the first underground section of the trail. Exciting!

At the entrance of the first tunnel, I rummaged through my bag to find the three torches I had brought along. One by one, we entered the dark tunnel, bending slightly because of the low roof. Soon enough, we were in complete darkness. 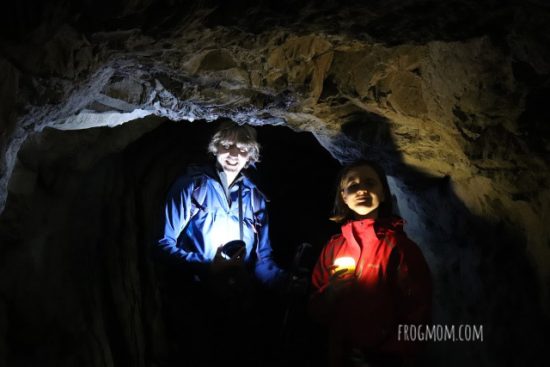 This first tunnel branched out about 2/3 of the way on the left and led to a fenced off cave. We retraced our steps to the main tunnel and exited inside the inner hole of the quarry. From where we stood, we could see a trio of beginning climbers abseiling on slippery slate and over an edge, a huge drop with a massive cavern down below. This was the Cathedral Cavern I’d read so much about. We had to get down there but the only way down was through a treacherous jumble of mossy rocks. 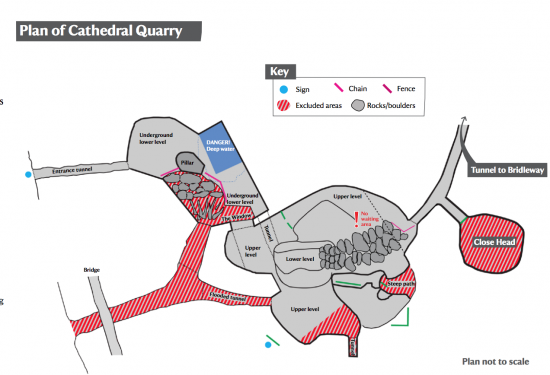 One by one, we climbed down to the lower level, entered another short tunnel and finally, walked on the bottom floor of the spectacular Cathedral Cavern. What a sight! With its central twisted pillar and the lake, it was really quite a sight. 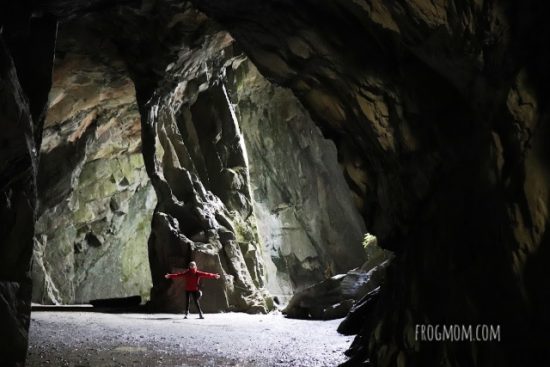 Apparently, larger quarries like Cathedral were leased to ‘companies’ of four or five quarrymen and almost 50% of the local population was employed to work here. For the anecdote, in 1929 Beatrix Potter bought this quarry and donated it to the National Trust which has set up a couple of signs (and warnings) on site.

As we exited the tunnel leading out of Cathedral Cavern towards Little Langdale, we were happily surprised to see that the sun had finally made up its mind. The hills were basking in a late winter golden light and the skies were blue. What a delight. From the cavern, we followed the track until a wonderful stone bridge worthy of J.R.R. Tolkien’s Shire, Slater Bridge. It is an ancient stone bridge that probably got its name from generations of miners crossing the river from villages to work at Cathedral Quarry or beyond. 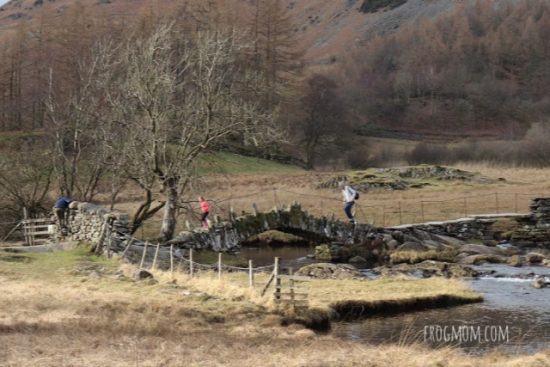 We continued on top of open grassy hills, stopped at the corner of a stone wall for a bite of apple pie (snack time for my daughter) and reached Elterwater.

There, we followed the wide Cumbrian Way, an all-purpose path that connects two cities across hill and dale in 112 K/69.5 miles. The stretch between Elterwater and Skelwith Bridge is very popular with families and we saw young children and old grandparents as well as young couples and teenagers. Many people were walking their dogs and my daughter literally melted at the cuteness of a Shiba Inu dog.

Talking about dogs, there have been a number of incidents between dogs and sheep so to clarify what’s right and what’s wrong, I present to you the most British of trail signs. You’ll never see that anywhere else: Sheep worrying is a criminal offense. 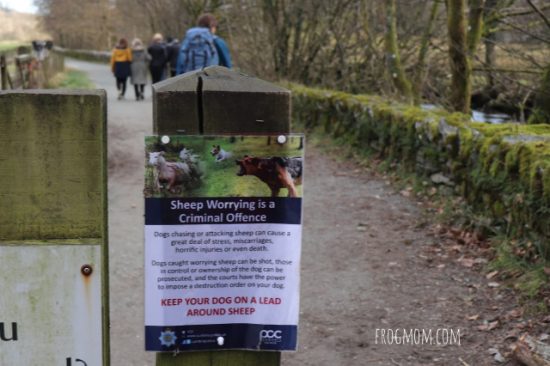 By the time we reached Skelwith Bridge, it was already getting late in the afternoon and we didn’t want to face the intense road traffic on the A593. 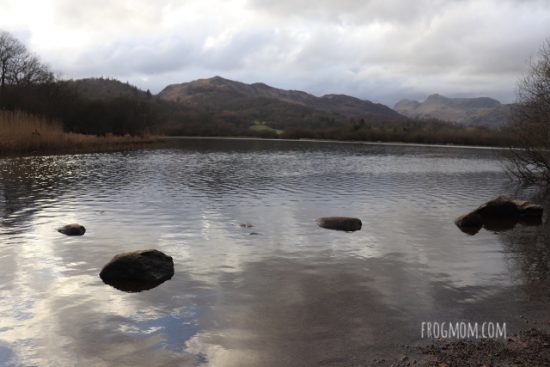 Instead, we took to the hills and followed the itinerary marked as “Ambleside (challenging)” via Little Loughrigg and a hill that wasn’t very steep. From the top, we descended upon Ambleside via Brow Head Farm.

At that point, we realized that one of us would have to go grocery shopping in Ambleside while the other walked back to the hostel with our daughter who had no interest in carefully selecting broccoli. Thus, my husband and I split courses. He got the grocery shopping bit (an extra 2K of walking) whereas my daughter and I crossed the river at Rothay Manor and followed the road south until we found Waterhead and the Youth Hostel.

I’m afraid we weren’t carrying a smartwatch or anything but I’ve eyeballed some stats out of the loop:

For a detailed itinerary and map of the loop starting at Elterwater, check out this great description (with map) on WalkLakes.

For a detailed map and brochure on Cathedral Quarry, check out this National Trust brochure.

2 thoughts on “Lake District: Circular Hike from Ambleside to Elterwater via Cathedral Cavern”