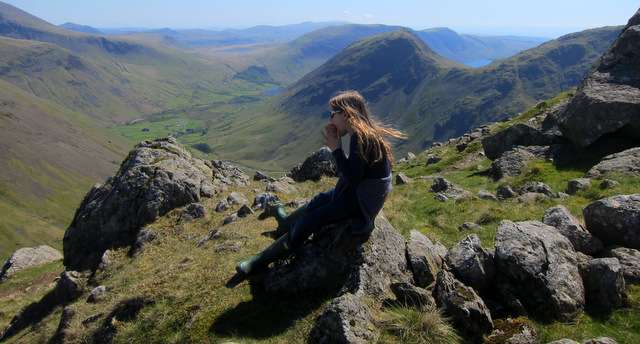 The forecast looked glorious so we gave it a shot. To summit this remote mountain in the Lake District, we woke up our 7- and 9-year old girls at 5 am, left our home in London at 5.30 am and drove 339 miles straight to our trail head. Simple and brutal but efficient. At 11 am we got out of the car, stretched our legs and hit the trail. By 2 pm we were at the summit smiling for photos and by 7 pm we were back at the car, having scared countless sheep in the thick heather moorland. What a day! High-level traverses, rocky scrambles, steep slopes and grassy fells – this was hiking according to my heart. Here’s my trip report on bagging the 12th highest summit of England.

There are two ways up Pillar – Wasdale Head and Ennerdale. Wasdale Head is the most popular route because of easier access. Do we go for easy? Hell, no. When I read that Ennerdale had no village, no public road and was basically inaccessible, I knew this would be our way in. Since our Lake District trip was planned on a bank holiday, I wanted to avoid crowds at all costs and remote wilderness was bound to grant us quiet trails.

At Ennerdale Water we parked the car and realized our topo map covered less than half of our route and started slightly west at our destination (Pillar). The only other map we had was a print-out from a blog. What a drag. Second bummer, I had forgotten a second backpack and had to stuff my messenger bag to the brim with knick-knacks, water bottles and snacks. Already I was looking forward to a rubbed shoulder. Ah well, never mind. We had chocolate for our girls and that had to count for something.

We started following the lake trail, a wide paved road that turned into a rough packed dirt road. Only authorized vehicles (obviously not us) could use it to reach a youth hostel three miles away. Truthfully, I had not expected the approach to be quite so long or the road quite so dull – meh, it was all flat. At Gillerswaite we laid down our bags and ate lunch, looking out on grassy fields at the bottom of the valley and the granite walls of the Pillar range. My, this was one tough cookie. I couldn’t wait to be up there! Looking at the steep sides of the mountain and with no map of that area, we tried to figure out the best way to reach the ridge. While my girls are content staying on flat trails, I have no patience for valley bottoms if there’s a towering ridge I can reach.

As we ate, a large group of walkers passed us by and we looked at their laminated trail maps with envy. How wonderfully organized. These guys sure knew where they were going and they had a map that probably covered their trail and beyond. Lucky fellows, I thought. We were going to have to fudge it, something I actually relished. When our trail forked south-east toward the river, we stumbled on the same group – they were studying their maps. Inspired, we asked if we could take a peek. My my, their maps were oriented pointing east, not pointing north. What an odd thing to do. Turns out they were walking the Coast to Coast trail from west to east and as such their maps, well, they were oriented sideways. Also, they were about to go on our trail and that was not their route – yes they had maps, no they didn’t know how to use them – so we put them back on the right trail and crossed the river.

Now the real fun could begin. Off trail we were bound! We were in for roughly 780 m/2,600 feet elevation gain whichever way looked the safest. We ambled on the dirt road by the forest plantations for a while and then got tired of staying level. We decided to shoot uphill across a stretch of uprooted trees at the end of the plantation. From there we’d reach higher hills and go around the tricky steep parts of Pillar to the ridge. Good plan.

Or, was it? Man, walking through the uprooted forest was rough-going, what with its uneven terrain and mine field of holes. Did they hire an army of moles to do that? Regardless the hill was steep and my husband and 7-year old soldiered on while I tried to cheer up my 9-year old who looked at me like I was trying to have her skip on one foot while juggling three oranges. “It’s too hard!” she said, followed by a few expletives. It sure was physical  but that was no reason to forget our manners. Of that I reminded her. Finally we  climbed over a fence (much to our daughters’ horror, “It’s illegal!” “Yes it is. Now stop fussing and come over!”), got out of the dreaded plantation and walked up a nice grassy hill to a rocky ledge.

There we pinpointed our location and brainstormed – picture stormy clouds over our heads. Seeing as we were basically under the cliffs of Robinson’s Cairn, we couldn’t go straight up – too vertical. Our only choice was to go down a few hundred feet to a river and follow the gully upstream to an area that opened on a circular hill. At the bottom of the hill, a nice plateau allowed us to catch our breath before tackling the ascent that, quite amusingly, got steeper the higher we went. How much steeper can a slope get before you need your hands as feet? Not very much, my dear monkey friends.

By now, my 9-year old was in a cheerful disposition and my 7-year old did her usual mountain goat thing – up, up, and up. I saw a silhouette on the ridge and yelled “I see the trail!” – which obviously was a lie since we were downhill. However that person must have been walking on the high-level traverse I’d read about and my lie cheered up the crew.

Once we reached the ridge trail I saw we were right next to Looking Stead. Geez, how far east we’d drifted! We saw a few hikers coming from the east. Like the Coast to Coast hikers they had followed the wide dirt road to Black Sail Hut – the famously most remote youth hostel in England – and instead of going straight, they’d turned south towards the ridge and on to Black Sail Pass. Or from Wasdale Head to Black Sail Pass. Either way, they looked in good enough shape while we needed apples and refreshments to recover from our cross-country experiment. Ah, the good fun of the less-traveled route!

Once on the ridge, there wasn’t much to do but to follow the ridge trail. My pathetic fear of heights kicked in a couple times – some bad drops and narrow parts – but my girls encouraged me and we were soon rewarded with our first views of Pillar Rock. What a mean piece of rock! Good thing our route was taking us along a comfortable saddle on to Pillar. “Keep well away from the edge!” I kept saying to my girls who appeared to be very attracted by airy views. Pillar Rock was no laughing matter when it came to sheer drops. On that topic, an helicopter hovered over Great Gable a few miles away during a very long time until a portaledge came down and lifted a person from the mountain. Search and rescue under your nose, hell of a mood-lifter!

After a steady uphill walk, we reached the telltale rock marker of Pillar at 892 meters high. It looked like a 3-foot high tower. Hurray! To celebrate the summit, my girls ran around like crazy sheep and went off to play house in the rock wind shelter. You’d never have guessed they were 7 miles and 2,600 feet into a hike. I climbed on the marker and smiled for the picture trying not to tumble.

After rejoicing, my husband and I wondered what to do next. The top of Pillar was basically the westernmost end of our map and most people we met turned around  to go back to Black Sail Pass. There was no way we were coming back to that dull trail. Which left us wondering – was there a legitimate trail beyond Pillar Rock? A couple looked at our girls and recommended that we avoid the steep route underneath Pillar. “Not with kids” they said, meaning death, dismemberment and sorrow. Being reasonable parents, we considered other options.

Fortunately a guy had a good map of the area and we discovered that there was a long way round if we were willing to keep going, follow a narrow ridge on to several fells, then wiggle our way down to the valley. Done deal! We rallied our crazy sheep and scrambled down – I mean, I was on my bottom – to the narrow ridge. You’ll never guess why it’s called Wind Gap! Hey, probably a great place to fly kites year round.

Wind Gap went on to Black Crag – a popular climbing face, and on to Little Scoat Fell. There, much to our surprise, the rocky squiggly path turned into a wide grassy plateau along which a stone wall ran. Called the Ennerdale Fence, this long dry stone wall went on for miles as a grazing divider at the top of mountains and ended up in the lake. It was slightly surreal to follow this seemingly endless human structure on top of mountains but it was a very enjoyable part of the hike. I even remember my girls skipping down some hills as green and smooth as they come.

Much as we liked the wall, the car was never going to find us up here. We needed to come down. Thus before reaching Steeple, we decided once again to try our luck cross-country and descended towards the river. What lovely moorland, where ferns sided with heather to create effective foliage over boggy holes and rocks! Needless to say, we advanced with caution. Around a bend we scared away a pair of sheep – a white mom and a black lamb. My girls were delighted, the lamb was so cutely unsteady on its legs. More lambs! they asked. And more lambs we found. The white mom/black lamb pair quickly became a regular sighting and even a joke as we couldn’t seem to find a white mom and a white lamb, or a black mom and a black sheep. All the stallions of the valley must be black.

On we trodded, down down the mountain towards the river. Right when we thought we were out of the woods – so to say – we saw the fence. Ah, the dreaded fence of the tree plantations. We thought about bypassing it at the level of the stream feeding into the river but no! Whoever put up that fence made sure it went into the stream. The sheep must be a real trespassing problem.

Well then, we just followed the fence (which went up a while, driving us nuts that we had gone down so much only to go up) until it turned sharply towards the river, and steeply down the mountain. Then a dirt road, a bridge and back to the dull road. Oh how glad we were to find it! My 9-year old had her sister film her singing a song about the mountain with an iphone.

An hour later we were in the car and that night, my girls got their reward in ice creams and mocktails. That’s for being good little soldiers!