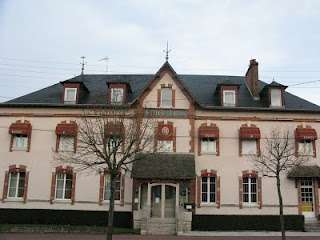 Lamotte Beuvron is a small sleepytown sandwiched between Paris and the Loire Valley with a big claim to fame. This is where Stephanie and Caroline Tatin, two sisters who ran the Hotel Tatin, accidentally caramelized apples with butter, shoved them in the oven with the pie crust on top, flipped the cake and served it to a hunting party in 1898. The Tarte Tatin was born and cooks have been making upside-down caramelized cakes since then.

Since we were spending Christmas 20 miles away, we decided to visit Lamotte Beuvron, if only to check the culinary legacy of the Tatin sisters in their native town. Lamotte Beuvron is is surrounded by wooded forests that – sadly – very few hiking trails criss-cross. Forests in Sologne are mostly private and maintained for hunting game. However we found a level 2-mile loop on the outskirts of the town to spend the afternoon. The trail featured wide straight alleys cutting through groves of oak, birch and chestnut trees, some with their naked branches reaching high to thick balls of mistletoe.

After the hike, we drove to the city center to find the famous Tarte Tatin. Our first stop was at the gas station to refill the car.”So where’s the best Tarte Tatin?” my husband asked candidly to the local guy.

“Ah Monsieur, it sure is on the Champs-Elysees!” exclaimed the guy – meaning in Paris. What? So much for town loyalty. The guy wouldn’t recommend any local pastry shops. Hmm, some bad blood there. Good thing for him he’s the only gas station in town.

Without recommendations, we proceeded downtown. There were four patisseries (pastry shops) in sight. We checked the first one out. There was a nice bike parked next door. We entered. I had the firm intention to gather seldom-heard and vital info on the original tarte Tatin.

To make the questioning easier, I first asked to buy a tarte Tatin for 10.

“What a nice tarte Tatin you make. Do you get your apples around here?” I asked.

“Why yes. We buy them from an apple farmer in the region,” answered the woman proudly.

“Interesting. What kind of apples are they?” I continued.

“That I can’t tell you. I’m not allowed,” she replied earnestly. Dang. The apple variety is classified information in Lamotte Beuvron.

“Oh, I see. Would you be able to just show me the apples please?” I risk.

“No I can’t do that either. I’m not allowed,” says the woman shaking her head.

“It’s for my blog. I would really like to see how things are done in Lamotte Beuvron,” I try with a sheepish smile.

“You’re not from around here, are you?” she asks, already guessing the answer (or suggesting it).

Both my husband and I vigorously shake our heads. No no, we live very far, in America. Pause. Bright smile.

“Then of course you can!” she exclaims.

She goes out back, rummages and returns with three big apples. I’m impressed by their size. Sam, my Californian cousin and gardener extraordinaire, suggests they may be the Belle de Boskoop variety and after looking it, I think he’s right.

Instantly, the woman’s face returns to shadowland. Why don’t I get it?

“I really can’t tell you that Madame. I’m not allowed by the boss,” she says.

Fine. I might as well ask for the ingredients of Coca Cola in Atlanta. After some more skillful chit-chat, I glean business bits and pieces. The patisserie sells 10 Tartes Tatin on regular days, 25 on big-selling days. That’s a lot of apples to peel. There’s a vacation resort nearby and  the tourists all come for Tarte Tatin. You bet they do. Hopefully they don’t all ask the type of apple or how many per tart or the name of the farmer. Because if they do, it’s classified info and we don’t want any trouble with the townsfolk! In Lamotte Beuvron, Tartes Tatin are really the apple of the people’s eyes.

That night we ate the Lamotte Beuvron Tarte Tatin for dessert. Was it good? Sure – on the super-sweet side with firm & slightly tart apples – but if you ask me, Laduree makes a better Tarte Tatin on the Champs Elysees in Paris.

2 thoughts on “Lamotte Beuvron, Home of the Tarte Tatin”