> Les Estagnous. Working Up a Mountain Appetite Hiking in the Pyrenees

Les Estagnous. Working Up a Mountain Appetite Hiking in the Pyrenees

Chicken noodle soup tastes a lot better after a 5-hour hike with 4,500 elevation gain. In fact, even simple bread tastes better but chicken noodle soup reigns supreme in my girls’ heart. Every summer, my family goes on a week-long refuge-to-refuge hike in the Pyrenees and every summer, what drives my girls is most certainly food. They look forward to the refuge’s communal meals more than anything else. Last year was no exception and three hours into the first day’s hike, we were all panting like thirsty dogs on the trail. Working up a mountain appetite hiking in the Pyrenees is no cake walk, but hey, we thought about the upside.

At the very least, we knew that a good meal expected our family at wooden tables that night. Fingers crossed, we might even have time for a shower before dinner. Romantically, we even looked forward to a good night’s sleep at high altitude—never mind the snores and “parfum de boots.” Best of all, we might make new friends during the aperitif. 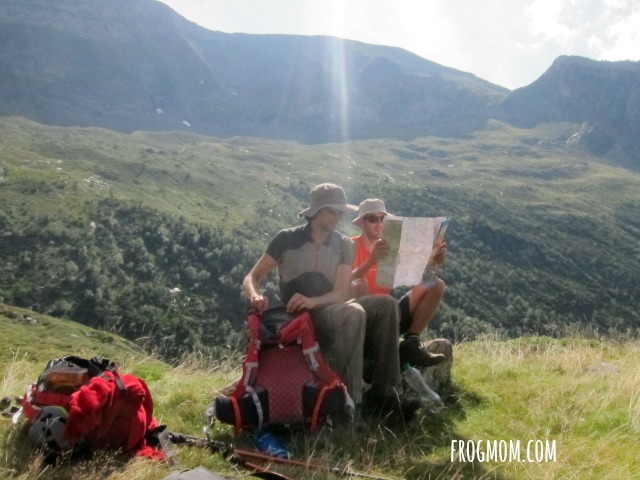 Back on the trail, we looked at the map and found the small Monopoly-shaped hut icon–Les Estagnous. My, it was still a few inches away—on a 1:25,000 scale map. That’s what we got for picking a remote part of the Pyrenees in the Ariège department, one of the least populated and most unspoiled in France. As the French department of tourism described it (awkwardly), “Ariège is like Corsica without the sea or Ireland without the rain,” meaning, no doubt, that Ariège has mountains, people and sheep. Way to promote tourism, I’ll say. The truth is, Ariège is very wild, not very touristy (at all) and getting anywhere “remote” takes time. And yes, there’s mountains, people and sheep. 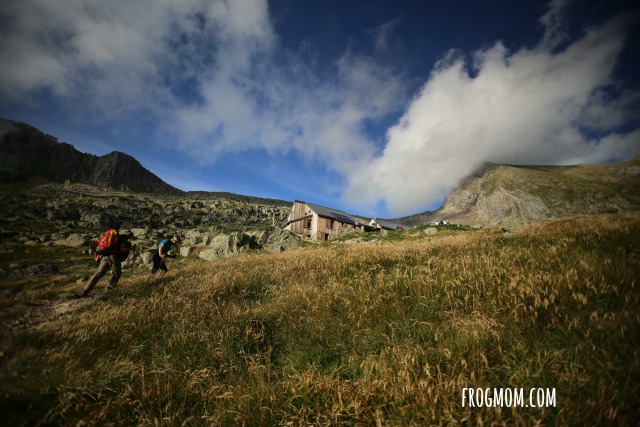 If the fading daylight was any indication when we checked, time was running short. My watch gave us only 90 minutes to dinnertime. Drat. Would we miss the sacrosanct aperitif? Perish the thought. We would have to walk faster. My girls picked a few last wild blueberries in the bushes and off they marched with our friend Damien in front, my father sandwiched in the middle, and my husband and I bringing up the rear of our backpack caravan.

An hour later, we spotted the tell-tale A-shaped roof, then the terrace, and finally, Les Estagnous refuge. The aperitif was safe! With much relief, we unlaced our boots and traded them for comfy Crocs provided by the refuge to check ourselves in for four days. 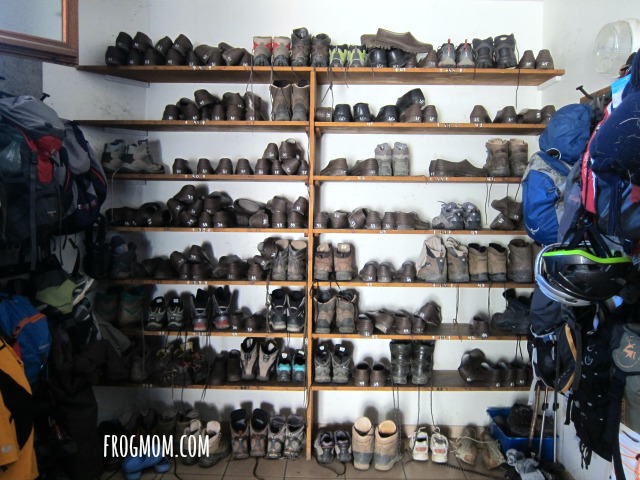 You’d think that four days at a remote mountain refuge with no internet or phone connection would be a nightmare for kids ages 10 and 11, but it was quite the opposite. Every year, my girls look forward to our summer Pyrenees trip like it’s Christmas. From picking their hiking outfits to selecting high energy snacks (chocolate = high energy but it melts—can I eat it fast enough?), from choosing the right book (it must last for four whole days) to the stuffed animal who’ll travel in my youngest’ backpack (PigLit the literary pig, again?), it’s become a ritual that they revel in because they partly created it.

Once at Les Estagnous, my girls unrolled their refuge routine like pros. First, a race to the dorm (“I want to sleep at this spot!”) banging doors on the way, then a quick trip to the bathroom for showers (please, can there be hot water?), then prepping PJs and PigLit on the pillow for later, staking the best dorm real estate for the next day’s outfit and then—ah, then—heading outside for the aperitif. 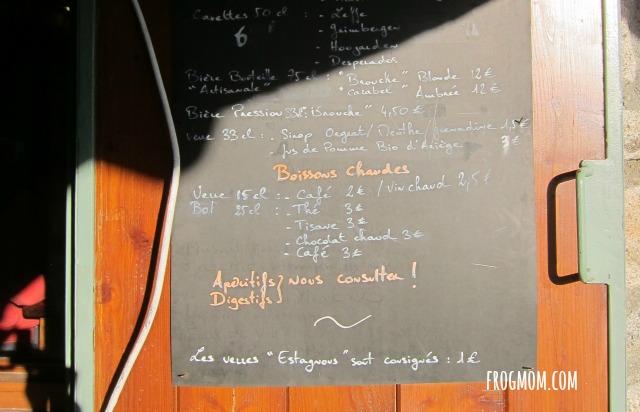 Nothing beats a cold glass of white wine with a view after a crazy day of hiking. Proudly perched on a rock under Mont Valier, Les Estagnous overlooked a perfectly-round lake 1,000 feet below—L’Etang Rond—and the happy chatter of hikers rose on the terrace. Wine glass in hand, my dad and I approached a group of older men who were boasting about their ancient age. 80 and 82 years old, really? At age 75, my dad was positively a spring chicken. And they’d climbed 1,400 meters over 8K today? Oui mademoiselle, but then, they’d lived in that valley all their lives. Oh my, these old-timers were postcard Frenchmen right out of a 1940s movie, berets and all. With a twinkle in their eye, they even admitted to snowshoeing part of the trail last winter. They could have broken their necks, of course, but they didn’t care. They were having too much fun. You, irresponsible rascals, you! 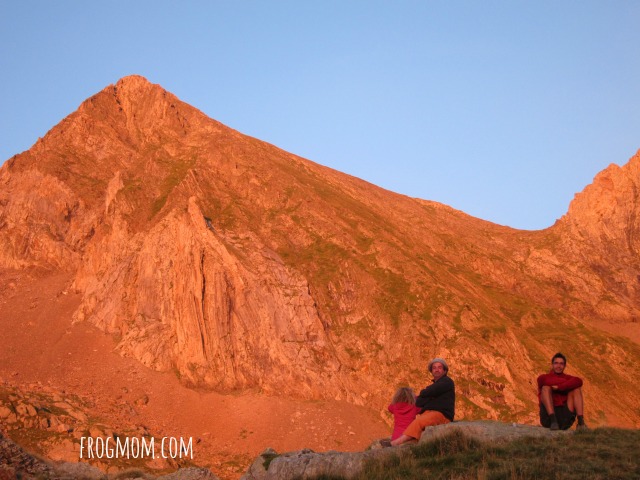 I turned around to tell my girls, but they were nowhere to be seen. Probably checking the nearby pond. Noticing the mountain light, I was struck by the sun painting the rocky flanks of Mont Valier red. Sitting on a big boulder above the refuge, our friend Damien was gazing into the mountains and I waved at him just as Laurent, the refuge guardian rang the bell. Dinnertime!

At once, the aperitif crowds turned into hungry ravenous creatures ready for the kill. Fortunately, refuge guardians know better and to avoid stampedes, place name cards on tables to indicate which bench you’re sitting on. Nice to meet you, Guten Abend. We were sitting next to a German family of four. The kids were roughly my girls’ age but they knew no English or French, and my girls knowing no German, they politely ignored each other with smiles.

The good news was, we knew what was coming and sat with eager anticipation. Dinners at mountain refuges in the Pyrenees are scripted to a T and Les Estagnous has a gourmet reputation (check out their “Cuisine” page.) 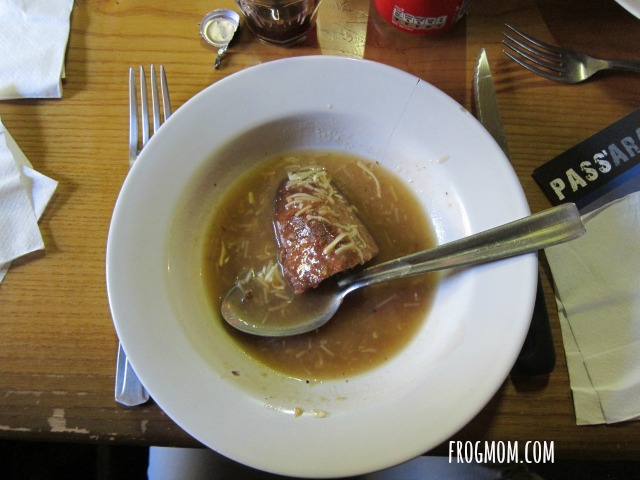 It was served family-style and we could have as much as we wanted from each course. My girls took three servings of the soup, as they really enjoyed it, and then looked miserably at the other courses and they weren’t hungry anymore. Go figure. Anyhow, nobody could ever pretend to be on a diet at Les Estagnous.

We were doing nicely with the cheese plate when Laurent, the refuge gardien yelled, at the top of his lungs “Coucher de soleil, tout le monde dehors!” and pointed to the door. In other words, “Sunset, everybody out!” What? Like clockwork, everybody got up and rushed out, leaving me befuddled as to why on earth we would abandon our claim to a perfectly good dessert that I could see from the bench. It was chocolate cake, for God’s sake.

Once outside, I understood why. 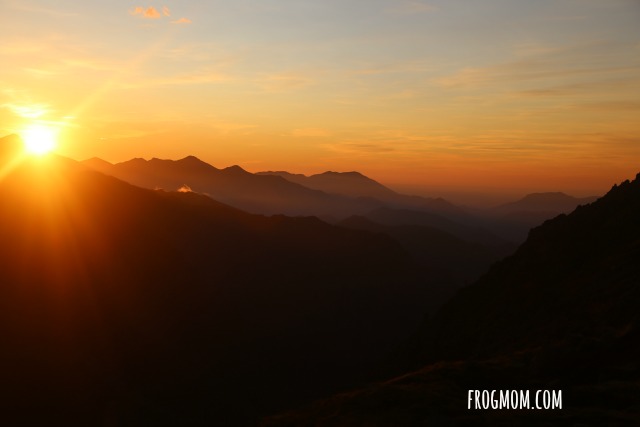 I’ve mentioned that Les Estagnous was perched on a rock. More accurately, it was built at the edge of a rocky platform that drops hundreds of meters, somewhat steeply, into the valley. At sunset, the lower valleys were steeped in darkness and the setting sun shone on a sea of puffy pink and orange clouds. In the distance, rocky ridges faded into mineral ripples. It was stunning. Simply stunning. My 11-year-old, never one to pass on a good Instagram moment, spent the next 10 minutes taking pictures of the sea of clouds with oohs and aahs of bewilderment.

Meanwhile, plates had magically appeared on the picnic tables with slices of chocolate cake. Yes! Revitalized, I picked up a plate and joined a conversation with three Catalans who were hiking the five-day backpacking circuit called Pass’Aran. Inspired by historical smuggling routes between France and Spain, Pass’Aran has become a rite of passage for serious hikers in the Pyrenees. Dating back to the Middle Ages, the route helped Spanish people flee the Civil War into France and during World War II, it helped evacuate 782 people from France into Spain and saved them from Nazi persecution. These three men were basically retracing the steps of smugglers through remote mountains passes. How very cool! 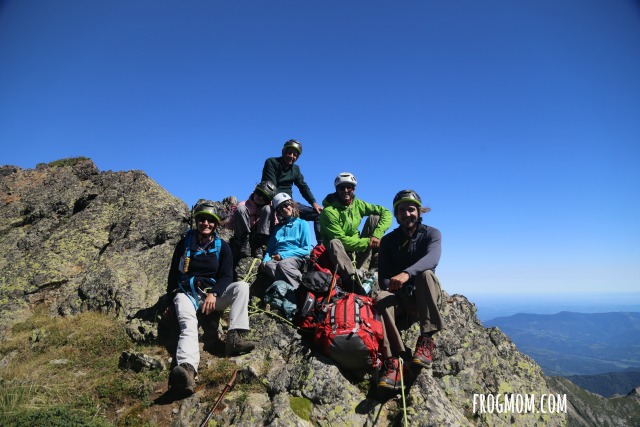 Over the next three days, we climbed to the easternmost glacier in the Pyrenees, we climbed rock walls, we swam in lakes, we summited Mont Valier, we picked more wild blueberries and we saw flocks of happy sheep. My girls spent an afternoon playing Monopoly with two British teens who were crossing the Pyrenees on foot. We visited the last cheese-making-hippie-shepherd in the Pyrenees and tasted his home-made cheeses and home-brewed herb wine (he was a wildling, for sure.) I struck a friendship with a gentleman my father’s age and we walked down to the valley floor with him. On that note, my father had to be helicoptered out of the mountain by the gendarmerie, but that’s a story for another day. (I promise, I’ll talk about it because safety in mountain areas is a huge topic and we learned a lot about emergency rescues that day.)

The sum of it is that each day, we hiked and engaged into physically challenging activities, anticipating the evening meal with much delight and a glass of wine as a just reward. Each evening, the menu changed and we sampled various local artisan cheeses and cold cuts, home-baked desserts and locally-sourced meats and veggies. On the booze front, we tasted a different bottle of wine from local terroirs every evening. My girls drank their fill of sodas and hot chocolate. It was a full-on foodie experience! Hiking in the Pyrenees is really a great way to earn your plate of saucisson and artisan cheese.

If you fancy doing the same, I’ve included practical details on staying at Les Estagnous below. For the record, I’m not receiving any money for this review and these are my honest opinions.

All hail mountains, people and sheep! 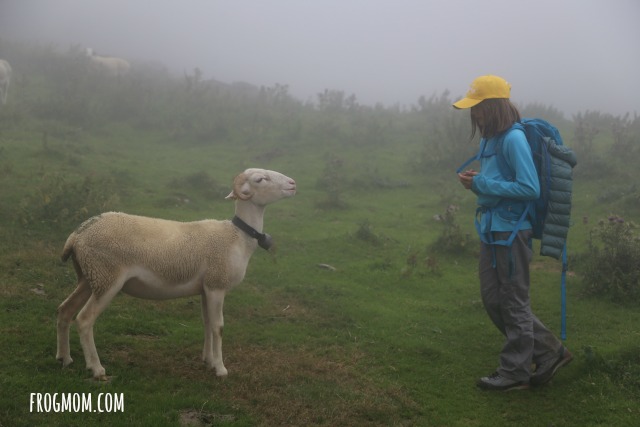