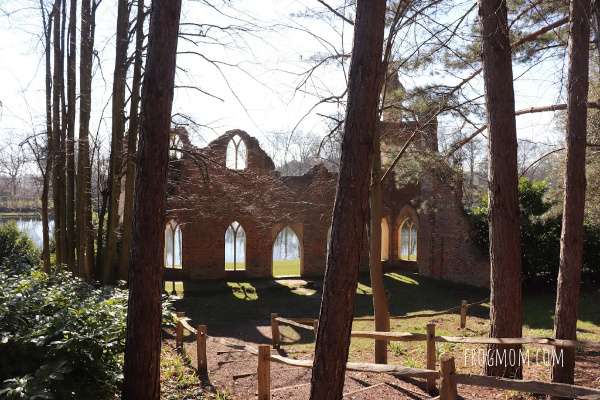 > Like a Sunday in an English Garden: Painshill Park

Like a Sunday in an English Garden: Painshill Park

English gardens are renowned around the world for their meticulously chaotic landscaping and celebration of nature. On a February Sunday, I was looking for a gentle day out by train outside of London with my husband and two teenage daughters. It had to be close enough to be reachable within an hour from central London, yet different enough to offer a true escape from the city. Hence I discovered the most English of English gardens, an 18th century wonder of  green lawns, genteel bridges over lakes, gothic follies and as a cherry on this very dainty cake, a mind-blowing crystal grotto made with actual crystals. Welcome to Painshill Park! 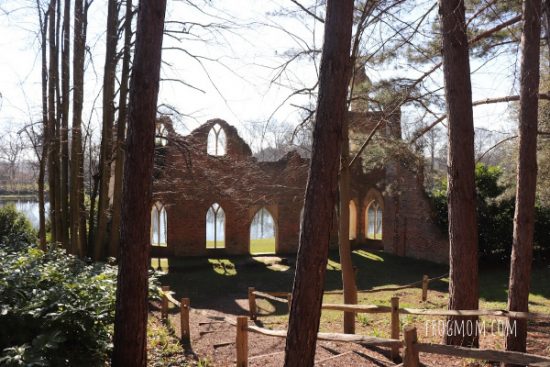 ‘The Glory of the Garden’ by Rudyard Kipling

I very much enjoyed this poem by British author Rudyard Kipling, poem that summarizes in its opening lines the essence of English gardens.

Our England is a garden that is full of stately views,
Of borders, beds and shrubberies and lawns and avenues,
With statues on the terraces and peacocks strutting by;
But the Glory of the Garden lies in more than meets the eye.

We did indeed see all of that, except the peacock, and the Glory of the Garden lay in way more than met the eye. But first things first, we had to get to Painshill Park.

Unusually for February, the weather was absolutely splendid and after breakfast, we left London by train under clear blue skies. We changed at Clapham Junction, waited for the train to Cobham on the platform and hopped on another train. In half an hour, we reached the tiny train station of Cobham & Stoke d’Abernon and left the station on foot. 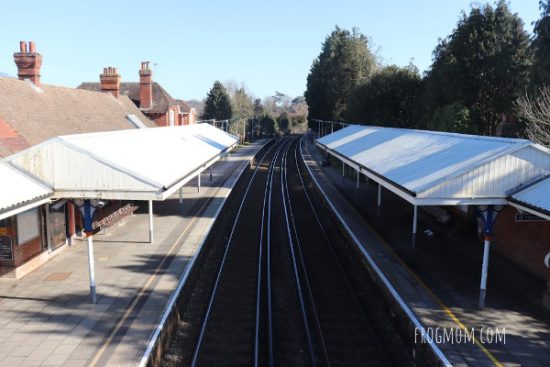 From there, it was a 50-minute gentle walk to the entrance of Painshill Park. With the help of Google Maps and using paths marked as “pedestrian,” we zigzagged through Cobham and Leigh Corner. Unlike some suburbs we’d recently walked through, these were lush and clean, pretty and bucolic. The countryside was surprisingly green for an area so close to London. On the lookout for spring dandelions for a foraging experiment, I noticed with great interest promising spots with nice plants and made mental notes of where to find them on our way back. 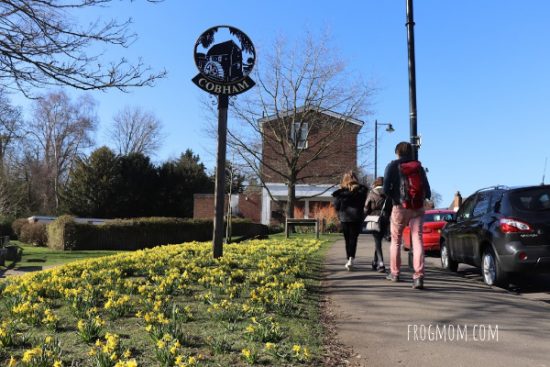 Soon after, we followed a stretch of River Mole where ducks frolicked in the morning sun and walked past Cobham Mill before walking down an old lane where a medieval house looked out on the graveyard of 12th century St Andrew’s Church. It was honestly, a really pleasant 50-minute walk through peri-urban Surrey before we reached the boundaries of Painshill Park.

Once we reached the parking lot, we noticed that it was quite full and filling up quickly. This place was more popular than we thought. Along with all the other families, many with young children and strollers, we crossed a contemporary bridge above a river and passed a statue of Bacchus before entering the visitor center. 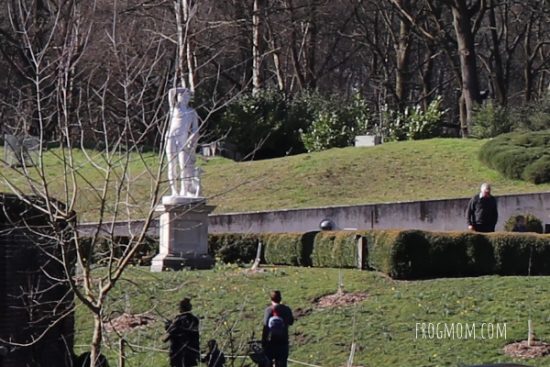 The statue’s buttocks looked very feminine whereas the front clearly indicated otherwise and that left us wondering. Had the sculptor had too much wine like Bacchus? Apparently, it was one of Hamilton’s most prized possessions although what he didn’t realise at the time was that for a tidy sum of £2,000 then, he’d been mis-sold a statue that was effectively a hybrid of several different body parts. That might explain why it didn’t look quite right as we walked around it. Once through the visitor center, the facilities were modern and clean, showing a well-oiled tourism machine and promising well-maintained paths.

Thank You, Hamilton! (Not the One You Think Of)

We set out on a path lined with snowdrops and early daffodils leading to the top of a hill overlooking vineyards. Vineyards in England? Now that was not expected but then, the history of Painshill Park isn’t ordinary. It started in 1738 when Hon. Charles Hamilton began to transform land at Painshill, Cobham, into a vast pleasure garden, inspired by the sights and experiences he had enjoyed while on two Grand Tours across Europe. Grand Tours were the proper thing to do in noble European families then, allowing young, inexperienced and wealthy male heirs to travel around Europe and learn by observation about business, arts and foreign languages. From their Grand Tours, they returned enlightened, educated and, in Charles Hamilton’s case, inspired. 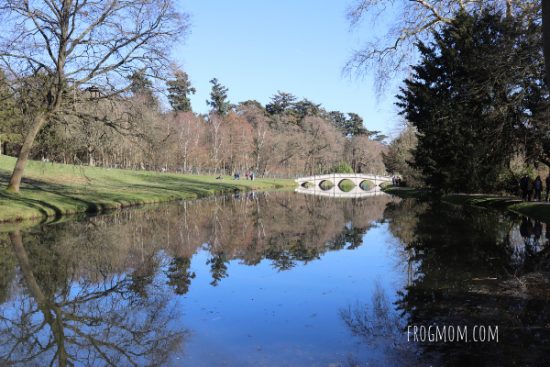 What exactly did Hamilton dream at Painshill?

Rather than paintings, Hamilton commissioned a garden that looked like a painting. It would feature the ruins of an abbey, because it’s dramatic, a Gothic folly on top of a hill, for that late summer tea and cakes with views, and a serpentine lake spanned by islands and bridges for that extra 18th century romantic touch. But hey, why stop when you can dream big?

The Most Beautiful Grotto in England

Before King Ludwig II made grottos the ultimate Wagnerian castle accessory, Hamilton ordered an extravagant grotto. Though he was wealthy, he was not very rich and it took 30 years to create the grotto of his dreams. His was decorated by hand with hundreds of thousands of real sparkling crystals mined in Wales and around the world. 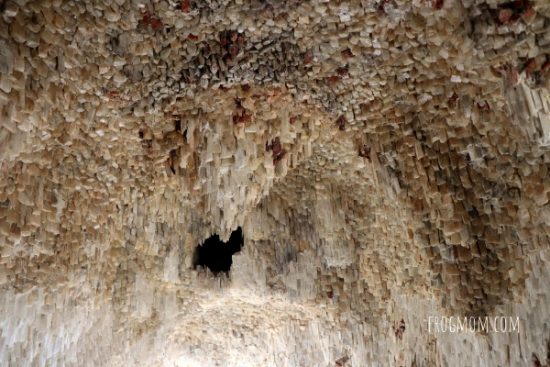 Amethyst, calcite, quartz, fluorite and gypsum crystals were glued by hand onto upside-down wooden cones mimicking stalactites. In the largest chamber, waterworks included fake cascading springs and an underground river flowing through coral pools. They were powered by hand-pump and triggered through hidden walls as soon as guests stepped foot inside the grotto and spotted via cleverly-placed windows. When the sun shone during our visit, it was incredible because as sun rays hit the water, it rippled and the whole thing lit up. 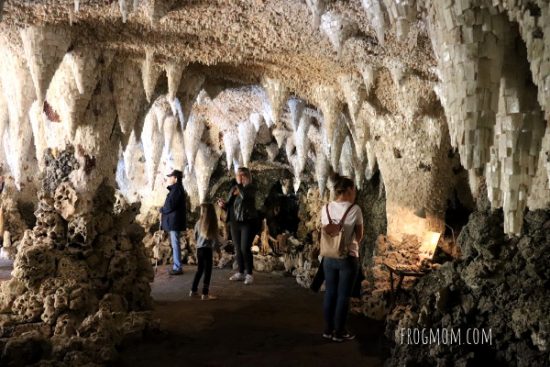 Charles Hamilton had thought of everything and I was stunned to learn that the grotto had been recently restored after having completely collapsed because lead had been removed from the grotto’s roof to pay for a VE day party in 1945. It looked gorgeous in February 2019 and I was quite excited by this surprise as I didn’t know the first thing about Painshill Park prior to our visit. I would definitely bring my dad who’s a soil scientist and can talk about rocks all day.

The second most fun structures at Painshill Park were follies peppered throughout the estate. The Gothic Temple looked like it belonged in an 18th century landscape painting, as did the Ruined Abbey and we had to pinch ourselves to remember that 18th centuries were all fake and built to look like authentic historical structures. 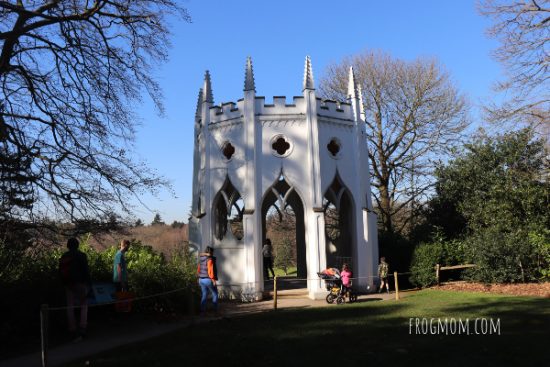 Our favorite must have been the Gothic Tower at the westerly tip of the park, although the steady noise of the highway behind the hill sort of killed the romantic mood. As we got closer, we spotted a sign at the bottom of the tower: “Teashop on the first floor.”

Did somebody say tea? We climbed to the top of the tower and got treated to a magnificent bird’s eye view of the mahoosive power lines in front of the tower. Sandwiched between a highway and power lines, this Gothic Tower really got the short end of the straw on this deal but it’s about to get worse as Highways England intends to encroach onto a significant slice of Painshill’s precious and historically significant woodland for the purpose of increasing capacity on the nearby A3-M25 junction. Ouch, I hope that the petition is successful in fighting this project. 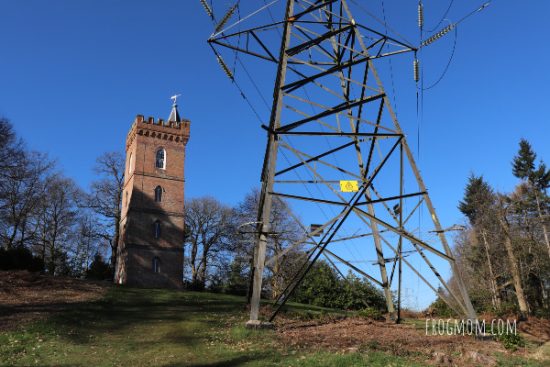 Anyhow, back to tea. The tea room was super cute. Tended by two ladies, it offered biscuits, snacks and hot drinks. We sat in a corner as I drank English tea with milk in a porcelain cup, watching other families take away cake and sodas to their tables. It was very civilized and not our typical Sunday day out but very enjoyable.

Waterwheels used to dot the landscape in the 18th century but not so anymore. This particular waterwheel served a specific function at Painshill Park. The wooden waterwheel, designed by Charles Hamilton, was 35m in diameter. The raised water travelled underground to the rustic cascade, where it then trickled down into the 14-acre lake. In other words, this was a glorified water pump. 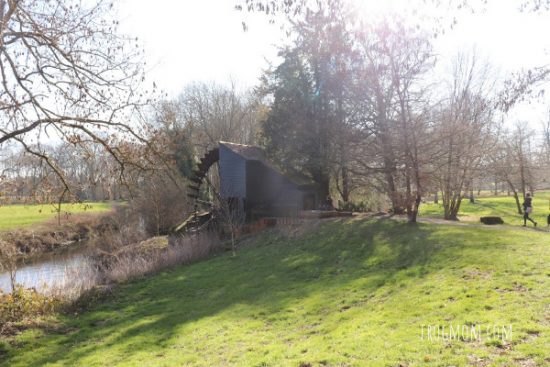 From afar, I mistook it for a water mill used to grind grain but clearly, it wasn’t. The interior of the building housed powerful machinery triggered by the river’s water going through a vertical waterwheel. In its day, it must have been impressive but as the wheel wasn’t turning when we visited, I assumed that the lake’s water supply system must have renovated otherwise.

If you have never been, Painshill Park is really worth a day trip from London.