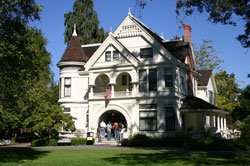 Today, someone from the Bernal Heights Parents Group asked if anyone knew of a “Living Museum” in the vicinity of the Bay 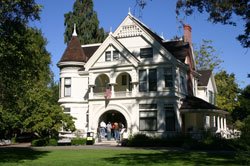 Area. She is reading The Little House series to her 4 year old and would like to show her “an iron bellows, someone making wagon wheels, someone working on a loom, etc.” I looked at the calendar and thought, “OMG, most state historic parks have their “historic days” celebrations around springtime. Time to get crackin’!” So here it is.

Where can you find crowds of costumed docents playing the banjo, dancing Russian polka or baking bread wearing funny bonnets in open air ovens? Let’s go back in time.

My first choice in the Bay Area is first and foremost Ardenwood Historic Farm in Fremont. It’s an 1870s historic farm in all senses of the term. There you go see a blacksmith at work in the forge, card freshly sheared wool with a docent who then spins it into yarn, listen to late Victorian live music or visit the “gingerbread Victorian” Patterson House. Check here for their special events, including the funky Scottish festival called Tartan Days. On regular days, you can partake in regular farm activities such as checking for eggs at the chicken coop or bringing hay to the liv 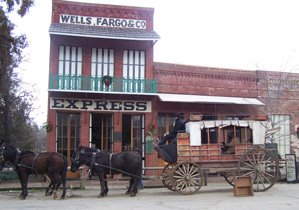 estock. Moving back in time.

Columbia State Historic Park is a real gold mine for Gold Rush fans. The town’s 1850s business district has been entirely preserved with shops, two – working – hotels and restaurants. Since the park includes two hotels, the latter are very active in organizing theme nights such as the Gold Rush Fandango and Casino Night. Families are not forgotten with events ranging from History Mysteries Summer 2009 (investigate an 1850s crime) to Back to School 1861 (ring a bell, climb the old staircase to the upper floor or experience the 1860s class in session), or Lamp Light Tours of Columbia (early December only). 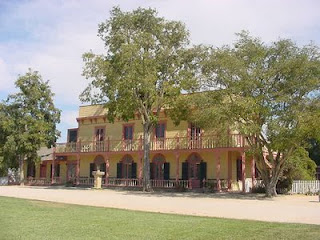 oric Park (a preserved gem of a one-street hamlet in the sierras).

For a bigger scale production, drive to Sacramento during Labor Day Weekend and enjoy Sacramento’s Gold Rush Days, four days of Wild West re-enactment on dirt covered streets. Last year we thoroughly enjoyed the old-fashioned games, the dancing, the street battles and the precious old school with its quaint desks and black board. Moving back further in time.

How about …. early 1800s? San Juan Bautista State Historic Park is the largest of the California Missions, features the only Spanish plaza left in California and is where Hitchcock shot the dramatic scene when Madeleine falls from the tower in Vertigo. This weekend on May 2-3, San Juan Bautista will feature a California Indian Market & Peace Pow Wow to celebrate Cinco de Mayo. If you can’t make it this weekend, each first Saturday of the month, the park offers Living History Days with docents dressed as miners, Civil War soldiers or stagecoach drivers. For a full-on family experience, check out the Early Days at San Juan Bautista on June 20, 2009. There will be a lotta’ costumed 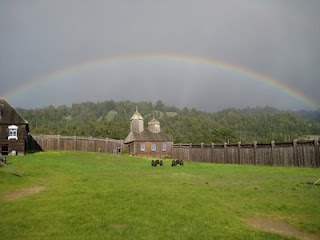 docents walking by. Can we go back any further in time? Yes we can!

Fort Ross State Historic Park between Jenner and Sea Ranch is an 1812 Russian-American settlement. A favorite for school visits and camping overnights, Fort Ross is the southernmost Russian colonization outpost in North America and features a real fort. Inside you will find a beautiful (reconstructed) Orthodox chapel, an 1836 house, the army barracks, and blockhouses. This Saturday, May 2nd, 2009, Fort Ross will host its Spring Celebration also known as Krasnaya Gorka. If you can drive the 2.30 hours from the Bay Area, you will be rewarded with circle dances, games, baking and songs. If you can’t make it on Saturday, July 25, 2009 (also a Saturday) will see the fort’s Cultural Heritage Day celebration, a rememberance of Russian America as it was between 1812 and 1841.

For a radical move back in time, hit the John Day Fossil Beds National Monument in Oregon on the first Sunday of each month for their Jurassic Day with live dinosaurs roaming the grounds and giant carnivorous plants rides on wheels. Just kidding! Don’t contact the NPS for this.

Now, if you know of other living history days, feel free to share them by commenting below.