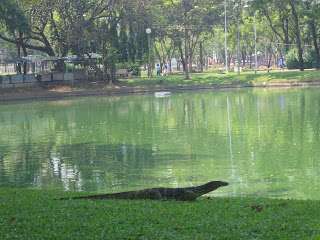 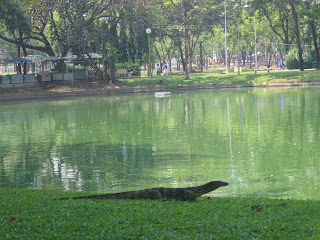 If I didn’t know they are just lizards, I would think they were crocodiles. This morning in an hour we encountered no less than seven or eight of these crawling reptiles at Lumphini Park, one of which measured a good five feet. Honestly, they are such an extraordinary sight and a staple of Lumphini because of its artifical lake, that the city of Bangkok should advertise them into a wilderness watching attraction, like the city of San Francisco does at Pier 39 with the sea lions. How’s that for eco-tourism?
Anyway. Cousins to the Komodo Dragon, the largest living reptile, the monitor lizards are carnivorous creatures. I understand the ones in Lumphini feed mainly on fish. Not to worry though, they won’t go after anybody’s toes. However, I wouldn’t let my girls run after the big guys. Too scary.
As we went out riding our bicycles in Lumphini, we spotted our first lizard by the big playground. Monitor lizards being water reptiles, it was just coming out of the sewers. Certainly they are 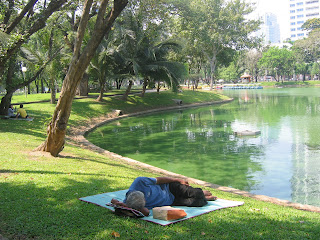 not picky when it comes to food. This tiny fellow was striped yellow and greyish brown and appeared to be very shy. This prompted my girls to chase him away. It kept hissing and sticking out its tongue at this annoyance. I wouldn’t want the big brother to come after me.
On the small island on the lake, that’s where we saw the biggest specimens. Boy were they impressive. Shy too, but not quite as much as the smaller guy. If you walk in Lumphini, just head towards the water, that’s where you’ll find them. 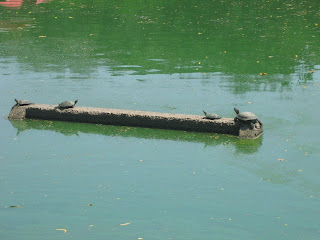 The other animals we encountered, apart from the numerous birds and mosquitoes (hello itchies), were a family of turtles sunbathing on a concrete bench on the lake. I was glad to learn that the lizard doesn’t eat the turtles, at least as a regular diet. By then, the combination of sun and heat reduced my girls to two whimpy whiny little girls and the sight of the turtles did not even get a “wow”. Only “I want to go home”, which we promptly did. So long turtles, we’ll be back to pedal on the ducky boats next week.