Next week I’m doing a presentation on Loy Krathong at my girls’ school. Loy Krathong is the loveliest Thai festival, the festival of floating candle lights. It’s a magical night where canal waters see hundreds of little krathongs (round floating vessels made out of banana tree trunk slices or styrofoam, and decorated with natural flowers or paper petals) float down with the current towards the ocean to wash away people’s sins for the past year and honor the rivers. Every year, Loy Krathong takes place on the full moon of November and this year, it’s the Saturday following Thanksgiving, November 24, 2007.

It used to be my favorite holiday growing up in Bangkok. We usually decorated our krathong at home during the afternoon, then stepped outside to float our krathongs on the canal flowing by our house. All Thai children make their krathongs at school in their early years. Loy Krathong is an occasion for Krathong contests and I’ve seen pictures of very elaborate and beautiful ones in the ancient city of Sukkhothai or Chiang Mai.

In adition to the floating krathongs, people organize beauty pageants and light up lanterns in the night sky in the northern provinces. It is a very pretty sight to see all these white lanterns (they are human size) fly up in the sky against a backdrop of firworks.

The beauty pageants are called “Noppamas Queen Contests”, honoring Queen Noppamas who, according to the legend, started the festival. It seems that she brought back the tradition of floating a small vessel with a candle from India and she was the daughter of a Brahmin priest.
We can’t really launch our krathongs at the beach as the beaches are closed because of the oil spill and our krathongs will be made of styrofoam. I yet have to find a place in California to buy slices of bananas trees or equivalent to make eco-friendly krathongs outside of Thailand. Our bath tub will do just fine. We won’t forget, according to the tradition, to send away all our sins with the krathong and wish happy things for the year to come.

This is what I’ll bring to school to speak about the festival:
– Supplies to make krathongs (styrofoam rounds, paper petals, glitter, candles and incense)
– a CD with the song Loy Krathong
– printouts of web pages showing kindergarten children making krathongs and pictures of Loy Krathong events and festivities in Sukkhothai and Samut Prakan. 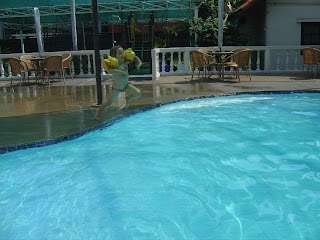