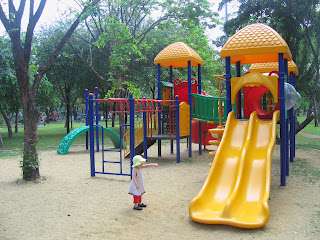 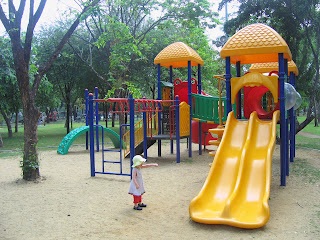 Lumphini Park is a welcome oasis in fast-paced concrete-built Bangkok. Nowhere else can somebody relax under Banyan or sugar palm trees on lush green grass listening to sirens blaring and cars racing outside the park’s walls. Its 140 acres used to be on Royal property and were donated in 1925 to create the kingdom’s first public park. It’s still Bangkok’s biggest public park and a favorite hangout for locals. You’ll see anything there from jogging businessmen in the morning hours to bodybuilders pumping iron in scorching heats, from slow-moving taichi ladies to cycling gardeners going around the park.
We decided to head over there for the playgrounds as I didn’t know where to find good playgrounds anywhere else. Dotted with two new metro stations, one skytrain station and surrounded by major thoroughfares in the center of town, Lumphini Park is easy to reach. Once inside, it would be useful to have a map but if you sort of keep going straight around the park, you’ll eventually reach a point of interest.

Entering at the corner of Wireless and Rama IV, we took a right and from far spotted bright yellow and red struc 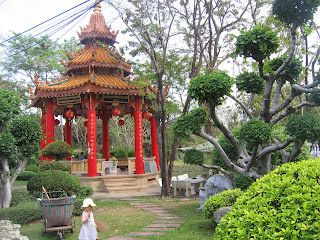 tures. This playground, complete with small climbing wall, slides, see-saw horsies and swings, got all my daughters’ attention until they saw adults exercising on machines all around us. From there on, we hopped from one machine to the next, slowly making our way to the Chinese Pavillion which is across from a big building site now.

Sitting around a picnic table were seven old ladies performing what looked like Chinese praying rites, striking bells and chanting low, bowing in front of robed images. As we got closer to observe their ritual, a woman walked by us and saw our girls. She stopped and speaking in Chinese, took out a wooden Chinese drum (the sort you see in dancing lion parades) of a plastic bag. Holding a stick, she invited my girls to play on her drum which they happily did. After five minutes, they got tired and handed the drum sticks back. The woman walked away. End of drum episode.

Even with hats and a bottle of cold water, my daughters were st 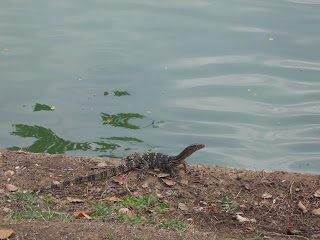 arting to seriously melt away under an overcast sky. Lured by the sound of music, we reached a covered structure with a couple learning salsa dancing. What an odd sight that was. The teacher, an elderly man, was gracefully swaying to drum beats while his partner, an attractive young woman moved around with the grace of a garden dwarf. We didn’t stay long though because another playground was calling us, the biggest in the park. On our way there, we were lucky enough to spot a giant monitor lizzard lazying the day away by the lake’s edges. As soon as I got nearer for a shot, he smoothly slipped into the murky waters of the lake and swam away, his crocodile-like rugged spine protruding above the surface. I reassured my girls on the fact that they were not going to be eaten alive by this mini dragon. We hurried to the next playground.

I couldn’t help showing off on the monkey bars, much to the dismay of my younger one. After all, adults too enjoy playgrounds! It was about time to leave and we traveled from closed restroom to closed restroom until it became clear the only option was to rush back home with the metro. Some guys offered my girls a much welcomed glass of icy water at the exit of the park and it temporarily restored their spirits. I gave up my initial idea of gong for a drink at the Robinson Department store of Dusit Thani Hotel. Off we went.

We purchased our 17B metro tokens and proceeded underground in civilized air-conditioned tunnels. Out at the Khlong Toei Station, I took the shortcut via the railway to go back home and as we walked past shanty houses, got looks and questions from the residents who couldn’t believe they were seeing westerners in their slum. 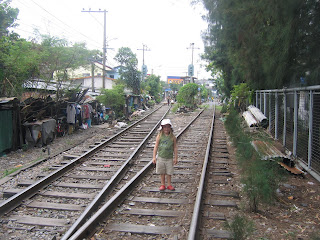