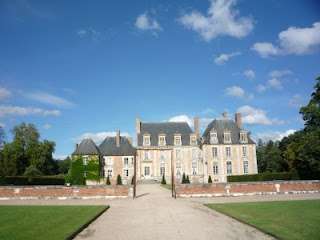 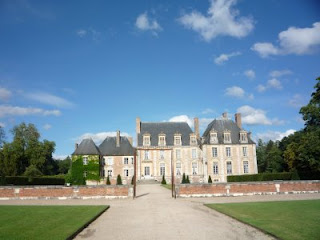 The Château de la Ferté Saint-Aubin is one of the first Loire Valley castles when coming from Paris.

Though not as flamboyant as Chambord, not as magical as Chenonceau, not as historical as Amboise, La Ferte Saint-Aubin is nevertheless worth the trip if only for its period kitchens and antique dolls displays. They are simply astounding!

I first found out about the castle in a cookbook that had been offered to my parents-in-law, La Cuisine des Chateaux de La Loire. This cookbook highlighted a few typical recipes from a dozen or so castles, one of them being La Ferté Saint-Aubin.

The opening double spread showed the picture of a woman in period costume piping miniature madeleines in front of the hearth underneath copper pans. I had to check it out.

As my in-laws have a country house soth of Orleans, it was easy for us to plan a last-minute visit to the castle after I browsed through the book.

As it turns out, the castle offers free madeleine making demonstrations all summer long and we were treated to a short cooking session followed by a tasting. 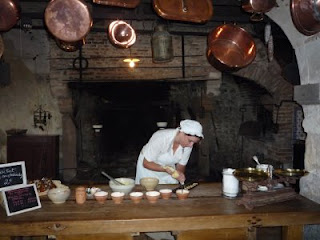 so yummy that my girls went for seconds and more!

After an extensive tour of the kitchens, we climbed up two flights of stairs to visit the castle.

Unlike any of the other Loire castles where formal visits and tour guides are the norm, this one allows visitors to freely wander and sit wherever they please.

The concept might be surprising but the current owner seems to focus more on the historical displays and gardens, as well as the restauration of the castle and chapel since he acquired the lot in 1987. Clearly, this castle is a work in progress.

As a result, the shabby furnishings and peeling wall paintings may be offputting to the newbie, but that’s 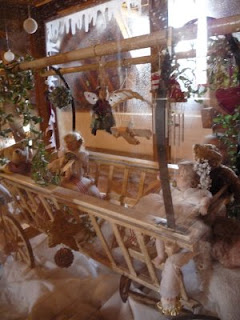 what you get for being allowed to play snooker or sit down in the grand hall of a Renaissance period castle. There.

Fortunately if you only step outside, there’s way more to see and fun to be had.

Indeed, the Orangerie of the castle displays 2500 square feet of antique dolls, vintage teddie bears, music boxes and miniature furniture, candy for the eye of children of all ages.

The vintage toys are staged in careful and beautiful compositions in glass cases, some of them downright hilarious (a teddy bear hospital shows the “X-ray” of a teddy bear with a key shape in the tummy), some festive (gorgeous red-and-white Nordic presentation of a doll Christmas), some nostalgic of old times (like the teddy bear school and a red-headed doll with glasses as teacher), and some dreamlike (like a winter scene with felt icicles adorning a big case where dolls in velvet coats take a ride in a sparly-snowed wooden carriage).

My little girls could have called it a day and stayed there all afternoon wandering from scene to scene.

Alas for them, I had plans to take them to the park to a place called “The Enchanted Island”, a village of themed miniature houses for children. 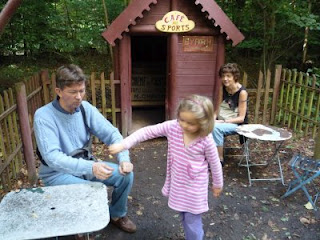 became their favorite as they ran from the child-scale grocery and chocolate shop to the sports cafe where they served us tea, to the school house where they taught us how to read, to the restaurant where we ate pasta, to the puppet theater where they performed a Guignol play and a bit further, the medieval fort. What a blast!

Again, we had a hard time tearing them away from the spot, but the day was drawing to an end and dinner was to be prepared.

So we quickly visited the horse stables and left the castle.

As soon as we drove out of the parking lot, my five-year-old turned to me and said: “Maman, when can we come back?”