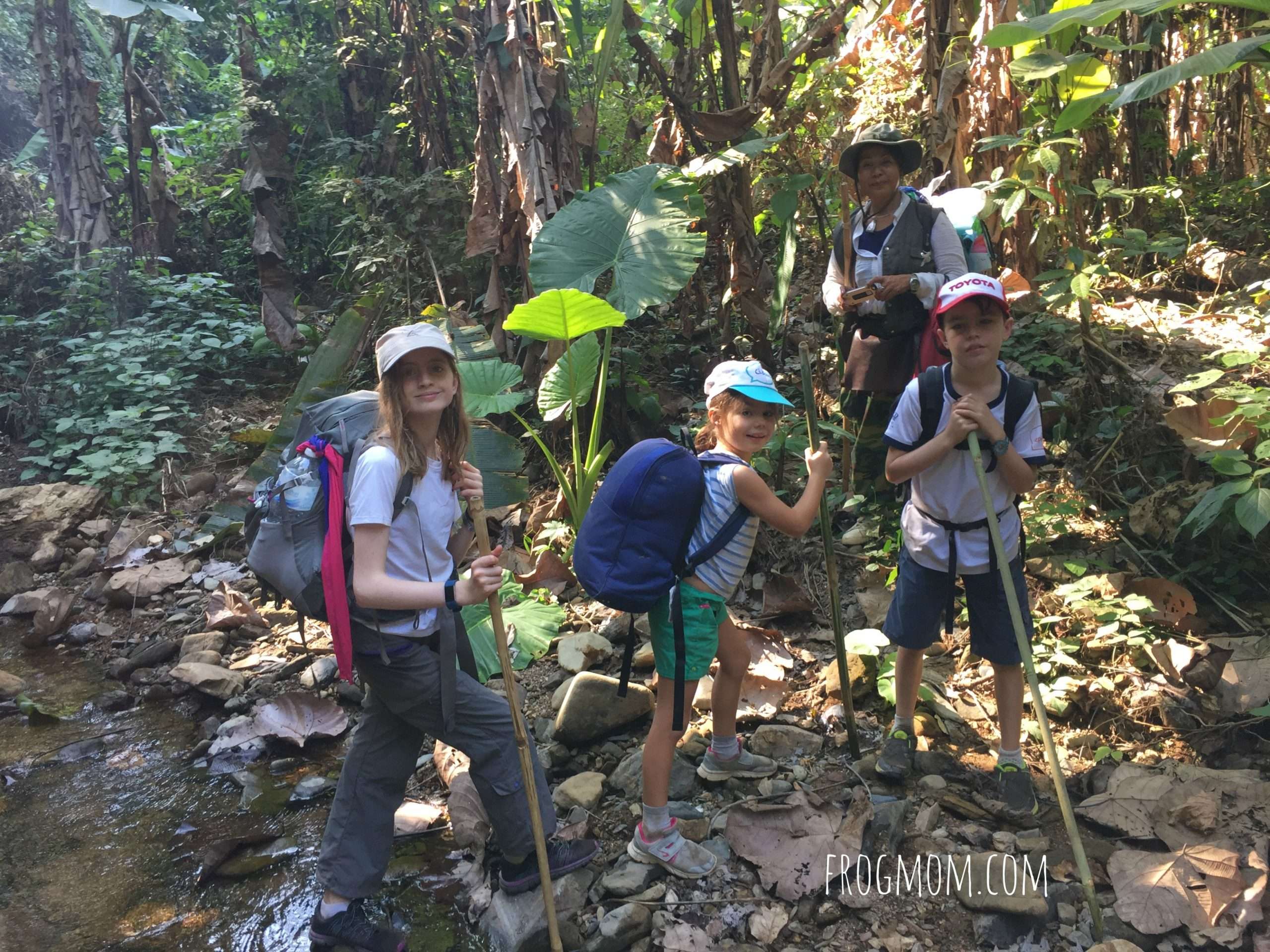 After visiting Tham Nam Lod caves in Soppong, my uncle and aunt had organized a jungle trek in the mountains of Mae Hong Son with people from the Karen tribe. In the morning after the cave, we drove seven hours through the mountains on small roads to reach Fern Resort in Mae Hong Son where we stayed overnight. This resort is famous – they had photographs of the staff with Brad Pitt and Angelina Jolie on the reception desk. Apparently, they are frequent visitors. The next morning, our guides picked us up after breakfast and drove us in a pick-up truck to their village.

Getting to Know our Trek Hosts 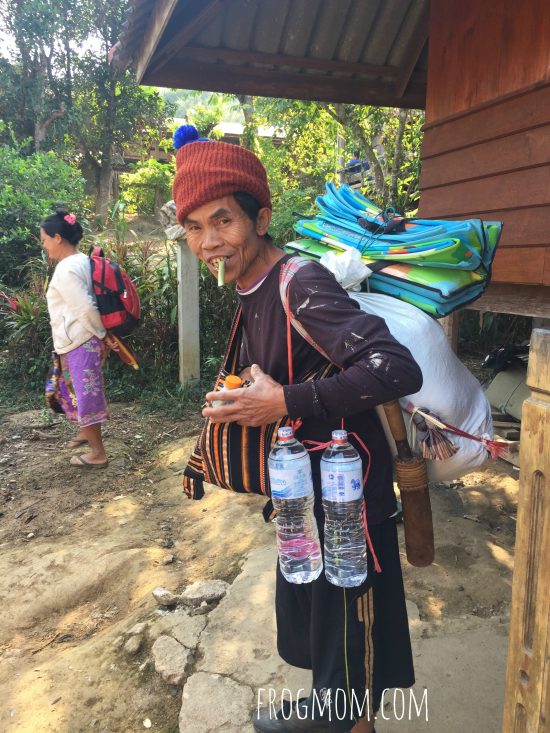 This one of our two porters, with DIY backpack. Note the craftiness of the structure, with random plastic bags hanging from everywhere. He, like the others, wore a sheath with a big machete around the waist. “It’s in case we are attacked by big spiders or snakes,” he told us. Great. Feeling very safe here! Indeed, the area is known for giant poisonous mygales (they’re like big tarantulas). 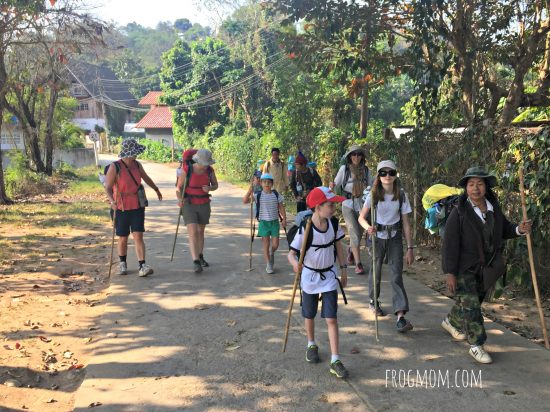 Our guide from Sawasdee Tours, Chan, was a local woman from the Karen tribe in her 40s, very friendly even though she didn’t speak much English at all. Good thing my uncle speaks fluent Thai. She was co-owner of the tour agency with her husband and their advertising read “friendly guides who walk slowly.” I love it! The guide really adapted her walking pace to ours but the porters, who were wearing flip-flops, were super fast and led the front of the group. 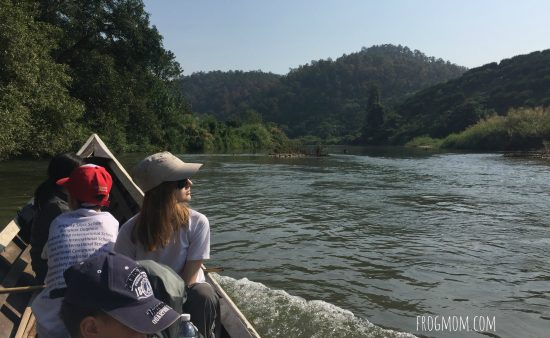 After walking for a bit we arrived at the edge of the Pai river where we took a boat to reach the trail on the other side. The boats we took are normally used to transport construction materials like dirt in plastic boxes, piles of stone or sand in bags. The boat ride lasted about 10 minutes before we saw our trail, a single file small dirt track. Ready or not, here was the start of the trek.

[photo 4575 iris et chien]
We continued along the track until we got to a farm where we drank some water and carried the adorable puppies everywhere, my young cousin wanting to adopt one of them, we also saw adorable baby pigs in bamboo pens. 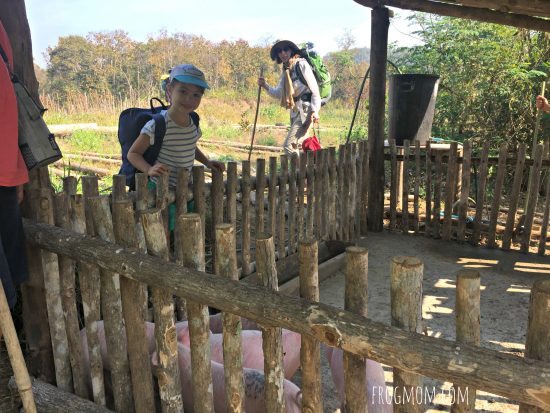 In the village, we saw piles of dried leaves everywhere. Why would they store dried leaves? Chan explained that they were used by locals to thatch roofs. This woman knew everything about local plants and customs and it was great to see how locals really live in remote parts of the jungle. 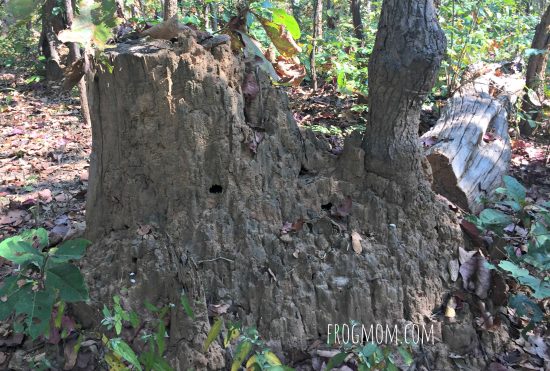 Chan stopped regularly to show us edible fruit, medicinal plants or, in this case, a giant termite mound. It was enormous! We continued to walk through bamboo and teak forests, along a river, and in the middle of the jungle. Habitats around us changed a lot and fortunately, Chan had us walk mostly in the shade. It was really hot! Not just that but sometimes, the trail suddenly disappeared and we were so glad for Chan’s mountain knowledge. She knew where to go and never hesitated, unlike the porter who sometimes had doubts.

After a while, we finally reached the lunch spot. Lunch! We were all very hungry and happy to see that the porters had already organized everything. They made a small campfire (and would do the same every time we stopped to eat, crazy) and we all sat around it, even though temperatures were super hot. 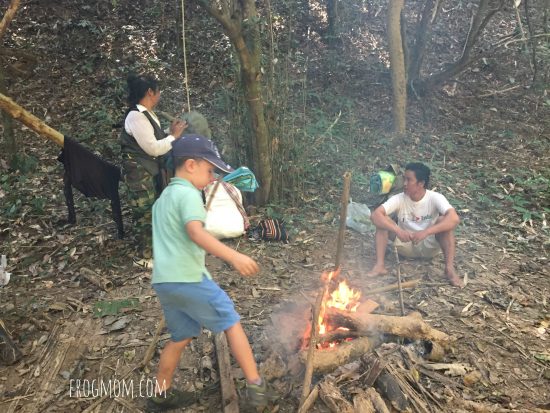 Before lunch, Chan showed us to a waterfall and a small pool where we spent some time going down a rocky slide into the water. It was not the most comfortable but it was so much fun! After our swim, we dried our wet clothes on branches by the fire. 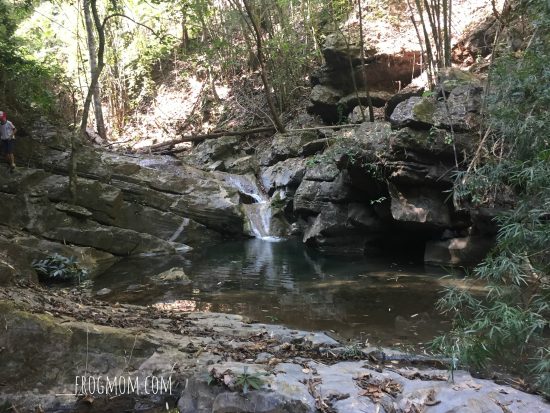 We were really hungry now. Chan took polystyrene boxes out of her bag and gave one to each of us. Inside, we found Thai fried rice with a lime wedge that we happily gobbled up. We started packing away to walk again, this time in two groups–the faster group, on which I was in with my two eldest cousins guided by a porter, and the slower group, with Chan, my youngest cousin and all of the adults.

Afternoon in a Bamboo Forest 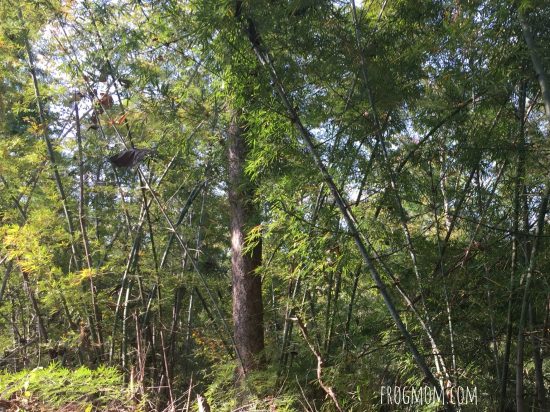 Bamboo, bamboo, bamboo trees everywhere. As we walked much faster than the other group, we stopped to have a drink and wait for them. Once reunited, we saw our porter take off at a fast pace to go ahead and prepare our campsite. I couldn’t believe how fast he walked with his flip-flops while carrying a heavy bag. After many hours of walking through bamboo forests, we eventually arrived at the campsite for the night.

Camping in a Cave

The porters had already built a fire and were trimming bamboo shoots with machetes to make cups, plates and various cooking/eating utensils. Spoons, plates, tea mugs, cups – honestly, I don’t know what they couldn’t make out of bamboo. It was fascinating and all of us kids loved this. 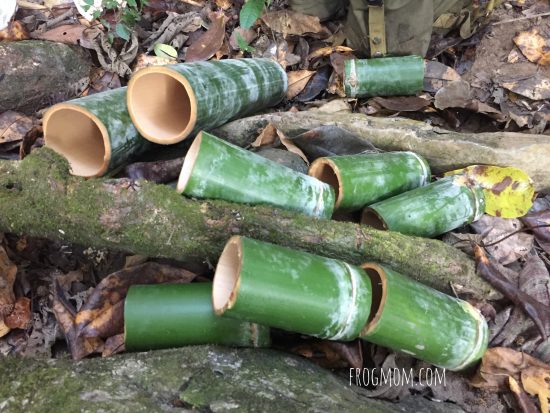 While the adults took a rest, my cousins and I climbed a steep hill to see where we would be sleeping that night – a cave! It had clearly been slept in before, as the ground was covered in dry leaves and it was quite cozy with a low roof and rounded ceiling. We went back down the perilous path to the fire and covered up a bit more since the sun was setting and the temperatures were going to be cold soon (15ºC). 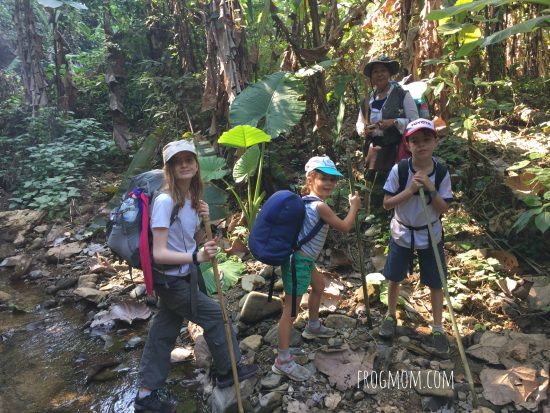 We unpacked a bit and stayed near the fire when we saw the guides had also undone their bags and were laughing at the quantity of water we hadn’t drunk, saying that all tourists carry loads of water but never drink any of it. They quickly got to work on cooking dinner and chopped up various ingredients that they had brought along or foraged along the way. Adventure! 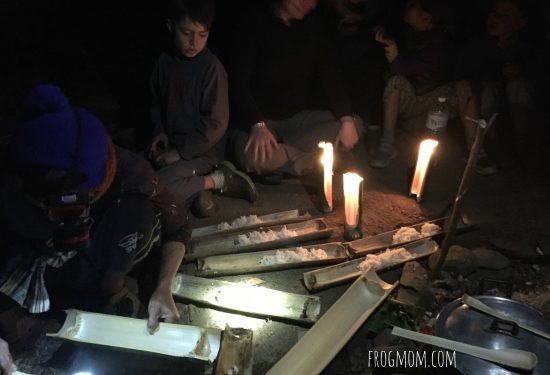 That night we were treated to a feast of three soups and rice, a stew with chicken, vermicelli and bamboo shoots, a vermicelli and vegetable stew and a mushroom vegetable stew. We ate until we were full and started the ascent up the hill to the sleeping cave. PANIC! A spider was on the wall of the cave and my three cousins and a few adults stayed far away out of fear. I tried to stay calm so I could keep my cousins away of the others feet and let the adults set up the sleeping quarters, the guide came up to see the cause of the commotion, deemed it harmless and told us not to worry so  we started organising.

We had two ultra-thin mattresses and two mosquito nets to prepare everything and we unpacked the sleeping bag as the parents struggled to attach the mosquito nets to the roof of the cave. We did eventually get to sleeping and fell asleep swiftly.

Open Fire Breakfast in the Jungle

The following morning, everyone was rested but sore because, obviously, a rock isn’t the  most comfortable mattress. However, we lived with it and cheered up at the sight of breakfast. 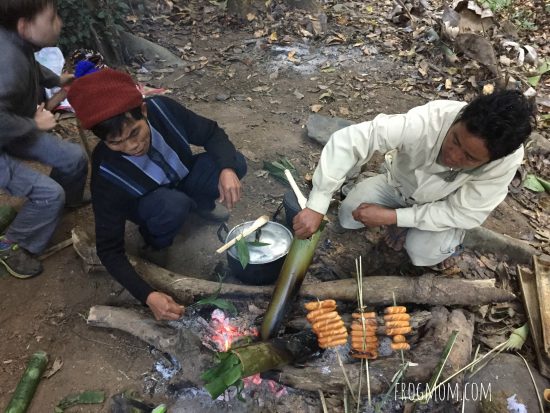 Hallelujah! Our guide was grilling sausages and toast over an open fire and we snacked on wafers while waiting for everything to be ready. I chose to have a traditional Thai breakfast with rice and a new stew but most had toast with jam and sausages. We did, unconditionally, have tea though and the guides had made a DIY teapot out of bamboo and served the drinks in bamboo cups, hand decorated by our guide with her machete.

We couldn’t wait for Day 2 of our Mae Hong Son trek.

To be continued (when I have time after school).