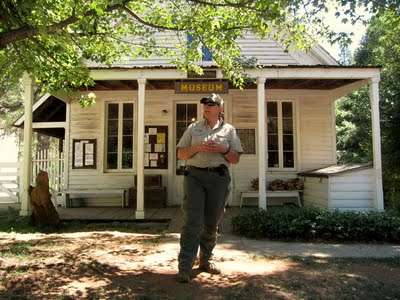 > Malakoff Diggins: From Gold Mine to Ghost Town

Malakoff Diggins: From Gold Mine to Ghost Town

“We were a wagon and horse town until the 1930s,” said Debbie the ranger at Malakoff Diggins State Historic Park, in the gold town of North Bloomfield formerly known as Humbug. Little more than the Main Street buildings remains at North Bloomfield but what it lacks in quantity, it makes up in authenticity. After a morning hike of the diggins under a scorching sun, we enjoyed a tour of the town by Debbie who brought to life the 1870s gold mining days with colorful anecdotes. Without Debbie, nobody would have guessed that the saloon accepted three forms of payment for its beer and hard liquor: hard currency, gold nuggets and gold dust. Hence the scale below the mirror at old Kings Saloon. “I love tours like that,” confided my 6-year old, “It’s so much fun.” We even had our Indiana Jones moment after Debbie told us where we could find a 600-foot long old drainage tunnel and walk through it. Now that was the highlight for our junior explorers.

Before we discovered the town, our family hiked the 3.2 mile loop around the diggins. Not only is the old mining pit incredibly scenic in a Bryce Canyon sort of way, but it is also surrounded with pine forests on the hills and criss-crossed with willow jungles and cattail marshes at the bottom. It’s a complex plant habitat that my girls enjoyed plowing through, especially in the willow “jungles.”

Shortly after we started in the shaded pine forest, we noticed an unusual smell around us. It was the unmistakable scent of cooked artichoke. Puzzled we looked around and couldn’t figure out what plant it could be. Finally we narrowed it down to a low lying fern whose leaves were very sticky – if not stinky, depending on who you asked.

When we later showed a picture to Debbie, she was positive. “It’s Sierra Mountain Misery,” she said, a plant whose leaves become oily and sticky during the summer months and thus highly flammable. Combined with pine needles in dry months, they’re a true fire hazard that causes headaches to forest managers. Such a tiny little thing, so inconspicuous and yet.

We went down the hills to enter the dry world of the mining pit. Known locally as “the diggins,” the pit is a 300-foot pit that was created by high pressure hydraulic mining from the 1870s to the early 1900s. Originally 600 feet deep and 1.5 mile wide, it was planned to be five times as large. Winter rains filled 300-foot high of gravel and hydraulic mining stopped before the whole project could be completed.

Gold mining in river beds required the presence of water to wash away debris and find gold. The mine at Malakoff Diggins happened to be smack in the ancient bed of the Yuba river before the Sierras were uplifted – a dry diggins.

The river was long gone when the first gold nuggets were found in 1849 and water was diverted from the sierras to wash away the gravel beds from the hills. We found one of the water guns – also known as monitors – along our hike. Quite the beast!

Standing in the sun was too hot – temps in the mid 90s – so we left the water gun and followed the yellow wooden posts marking the trail on the pit floor. Don’t know if we would have found our way without them. It’s a maze down there and visibility is limited because of the vegetation. It’s so thick that it creates micro-environments like the willow jungle portions where our girls got a kick at pretending to hack away at the “tropical” plants. They certainly couldn’t see 10 feet ahead.

Fortunately us adults could see above and never got sidetracked for long. Yes we did err here and there but in the end, we found our bearings and the way out of the pit.

Coming back to the car was a huge relief to our little ones as the heat was getting at them.

Debbie the ranger was our guide, a wonderful woman who could tell you stories of 1878 like she had been there. Interestingly enough, most of the information she shared with us, the California state parks heard from Charlie Gus, a native of North Bloomfield who was born in 1878 in the heyday of the hydraulic mining, grew up to operate all the pieces of equipment, stayed after the townsfolk dwindled down to 9 families and died of old age in the village.

First thing you did when you arrived in town was hit the stables because traveling from Grass Valley took 18 hours and the horses were tired. In the stables we admired a hay press, a few freight wagons, the little buggy that served as the town’s “taxi” and the snow wagon/sled that got you out of town when you were snowed in.

With 6 to 8 feet of packed snow every winter, the people of North Bloomfield spent their autumns canning, preparing, storing and making sure they’d have enough to last until spring.

From the stables we went on the Kings Saloon where cheating was not allowed. “This is a square house” reads the sign at the back of the narrow room where miners spent their day’s wages on cheap local beer in glass bottles or more expensive imported beer in ceramic bottles. We sat around round tables with decks of cards invited a poker game or two but sadly we didn’t have time for that. On to the pharmacy, the jewel of the park

Set up in 1874 by a dentist turned pharmacist called Adrian Smith, the pharmacy smells of saw dust and metal and its neat shelves are lined with bottles of herbal elixirs, medicines, potions and dried shrooms. For the kids, the real draw lies in the kiddie corner where Mr Smith sold books, toys and sheet music.

Inside the general store, the kids had a blast identifying all sorts of heavy crank-up or wheel-operated machines, as well as spotting each single item hanging from the pale green ceiling. The metal bath tubs had their share of success, as well as the striped socks display and the old typing machine i the back of the store.

We finished the tour by a visit of a private residence, the house of Rush Dix Skidmore, a German baker turned saloon operator, stables owner and philanthropist. He was the proud father to two boys and three girls who were the best dressed in school. Check out the pleat maker in the kitchen and empathize with their poor mother who sweated hours away on her girls skirts before sending them off to school. That concluded our tour but before we left, we stopped at the visitor center to enquire about the Hiller Tunnel.

During our morning hike, we found the crumbled entrance to the Hiller Tunnel from the Diggins Trail but didn’t go further than a few feet in – not knowing the condition of the tunnel. In the afternoon, Debbie confirmed that we could walk the whole length of the 600-foot long tunnel and that it was easy to access from the road. “Make sure you wear proper walking shoes,” added Debbie, “It’s very slippery in there with the water draining from the creek.” We didn’t need more to get us going and 15 minutes later, we were in front of the tunnel entrance with walking poles and headlamps. Drip, drop, water dribbled from the ceiling and stalactites were forming overhead. My husband and I couldn’t help humming the Indiana Jones theme because hey, it’s a pitch dark tunnel and for all we know there might be bats and hidden treasures!

“That’s adventure,” kept repeating our two girls. Yes, real adventure, especially where we lost sight of the day’s light in the tunnel. What a perfect ending to Malakoff Diggins. When you explore the tunnel, don’t forget that tunnels are cold (wear an extra layer), this one is wet throughout (waterproof shoes better) and good flashlights or headlamps are compulsory.

One last note: you should know that Malakoff Diggins is on the list of state parks to be closed. The rangers forecast that a caretaker will take up residence in the town but nobody will be able to access the buildings, not even the thousands of school kids who enjoyed a day of living history for their California studies every year. Before you go, call and check the status. The gold mine town that was never a ghost town is about to become one.

3 thoughts on “Malakoff Diggins: From Gold Mine to Ghost Town”