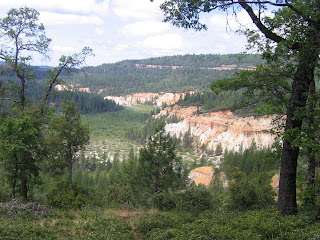 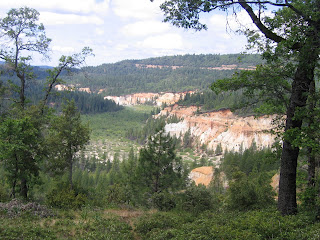 Three and a half hours east of San Francisco lies what used to be the world’s biggest hydraulic mining operation. Until 1884, that is. Malakoff Diggins State Historic Park comprises the 600-feet canyons excabated by the gold ming operation, as well as a genuine ghost town complete with ghost if you ask Debbie the ranger. Until last week, the park was on the infamous list of 47 state parks to be closed in 2008 by Governor Schwarzenegger. It now seems they are temporarily out of danger 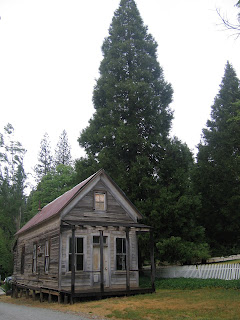 al Day Weekend, I organized a big family camping trip at the group campsite, gathering three dozens of my friends and my two girls. The weather could have been better (it rained a lot and was cold) but just getting the kids out there felt great.

Saturday’s rains drew us to the hamlet of North Bloomfield where we took a ranger-led tour of the ghost town, and did some gold panning under pine trees.

As the afternoon went by, the rain showed no sigh of giving up but we nonetheless welcomed new campers at the site who set up camp and joined in the crazy wet weather. At last, the weather dried up.

The kids got all excited and ran around like they’d been locked up all day. Besides stealing each others’ bicycles and playing tag, they enjoyed the ritual of marshmallow roasting (if not burning) by the camp fire, playing light sabers with glow sticks and listening to bedtime stories in the open air.

Our friend Rosssana particularly treated the children to a retelling of Yoshi’s Feast, a Japanese tale of broiling eels and stingy neighbors. 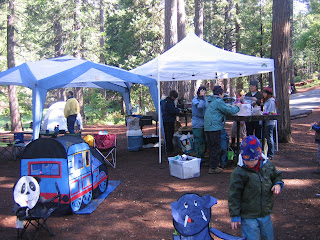 Us adults got our share of fun with happy hour by the makeshift kitchen under the tarps and gourmet meals prepared by our Dutch, American or Italian friends, depending on the time of day.

Late at night when stars were hiding behind the clouds and rain stopped falling, we were treated to an improvised mandolin folk concert by Danny Lloyd, lead singer and composer of Hybridkid, the San Francisco indie rock band. From John Lennon to Michelle Shocked, our evening by the fire was a musical one. 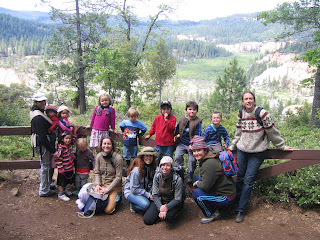 When the sun shone on Sunday morning, a bunch of us set off enthusiastically on a (supposedly) 2.7 mile-long hike to the Diggins (the mine).

Taking Slaughterhouse Trail from the campground, we hiked downhill quite a bit before hitting the valley floor and crossing it from side to side. It felt weird to walk by abandoned pipes, probably formerly used by miners and left to rust in the hills after mining got discontinued.

As the hike progressed, some young’uns got hungry and the skies darkened. Right when we stopped for lunch, a big mass of black clouds steadily made its menacing way towards us. We didn’t linger and took off, finishing under the rain a walk that felt closer to 4.5 miles and four hours. To their credit, the children walked great and strong.

Malakoff Diggins is a slice of California’s past worth visiting and it wetted my appetite for quirky ghost towns in the hills.