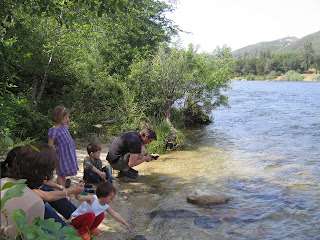 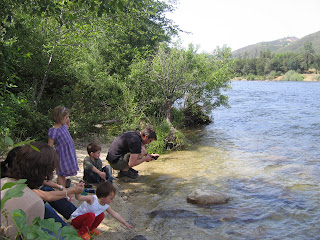 Gold panning, pioneer fiddlers, freezing waters in the American River and rolling green hills: that’s what the Marshall Gold Discovery State Historic Park offers in spring. We spent the weekend in the South Lake Tahoe area with our friends Matt and Beatrix, and their two children Ian and Camila. After a day around Lake Tahoe, we decided to explore warmer grounds by driving back to the Bay Area through Eldorado County. I had Placerville in my mind as a gold digging town so we headed there first and had lunch at the Cozmic Cafe, a funky “carrots and tofu” eatery on the premises of a former gold mine. The setting may be exotic, but the food was so-so and soon we were on our way.

Coloma is only seven miles away yet the roads are so windy over there that our girls had time to start wailing “My tummy is hurting”. Slow down, look out the windows, another curve, we were there.

Coloma is literally where the Gold Rush began. In 1848, a man named James Marshall found a gold nugget in the American River while working on a sawmill. News spread to San Francisco, a barrel of gold nuggets was sent parading to Washington DC, and the Gold Rush kicked in. 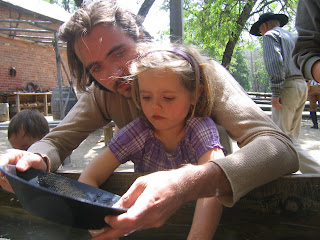 visit to 2008 Coloma is like a step back in time. Park under a scorching sun or in the welcome shade of a tree and start strolling down dusty Main Street and its wooden boardwalks.

As a historic park, the city has preserved fascinating exhibits such as a blacksmith shop, a gun shop, a jail and other Gold Rush paraphernalia.

Our main stop was by the gun shop where for a modest fee, we could pan for gold in raised wooden boxes filled with sand, gravel, garnets, fool’s gold and real gold flakes. The truth is, we didn’t really strike it rich and neither did Matt and Beatriz.

But the children had loads of fun (panning for Louise and Ian, mudcakes and picking up rocks for Iris and Camila) and there was an Old West quatuor behind us jazzing up the place with their fiddles, guitars and banjos.