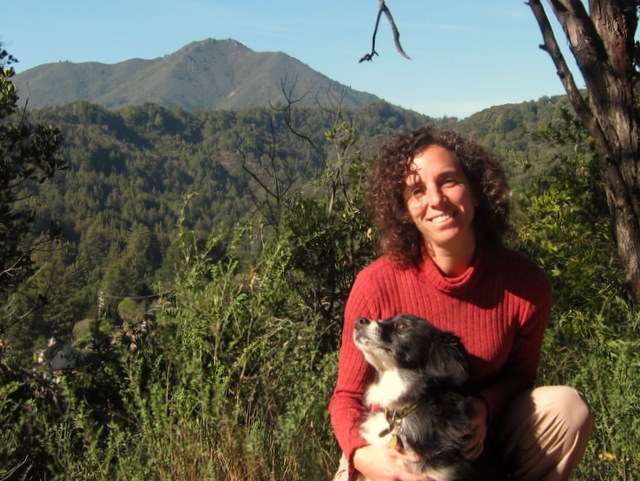 A year ago, Ronnie Sharpe and her friend Marjorie got together over a cup of joe and created Marinhood, a website that lists kid activities from infancy through early grade school years (Ronnie’s Awesome List) and for the tween and teenage years (Things To Do with Tweens and Teens in Marin). Ronnie describes the lists as “get in, get out,” a no-thrills but carefully selected list of activities for local families. To find out about the great list, I met up with Ronnie in Mill Valley where she lives and we went on a hike at Camino Alto Open Space Preserve with her dog Munro.

I first met Ronnie (online) when she was editor of the newsletter of the Southern Marin Mothers Club and I was managing editor at the Golden Gate Mothers Group. We exchanged emails, traded publications and that was it until a year ago. Ronnie’s name re-appeared on my digital screen when Ronnie’s Awesome List was born and she emailed the link to a Yahoo! group I’m part of. Ronnie, as in Ronnie Sharpe? Clearly it was the same Ronnie and I decided to find out what Ronnie was up to.

On Being Adaptable
“I was an Air Force brat and moved nine times as a kid from base to base,” explained Ronnie who added that moving often to places to all looked alike made her a very adaptable child. Later in life, adaptability helped her in a down economy when she worked at a pet clinic after a sculpting and art degree -though she still used her art degree doing textbook illustrations. Today, her ability to move on has turned into a professional photographer, grant writer for non-profits and Bay Area blogger.

On Dinosaurs
Some parents say “yeah, my kid is into sharks” or “my kid is into forts” but generally these phases are short-lived. Ronnie’s daughter Amelia is not just into dinosaurs, she’s obsessed by them. At age eight, her goal is to be the youngest person ever to discover a dinosaur bone.

Her passion has led her to visit the museum of the paleontology department at UC Berkeley, look up the clam fossils on Mount Tamalpais and learn Latin words, prefixes and suffixes to understand the meaning of dinosaur names. When she watched the movie Jurassic Park, she critiqued that “these dinosaurs weren’t even in the Jurassic era!”  Of course she’s read pretty much any dinosaur book for kids out there and graduated to the adult stuff. Is that an obsession or what?

Ronnie pitches in the dinosaur obsession as well, looking for paleontology digs that will take a 3rd grader or researching summer trips with dinosaur stops. On the Halloween front, what did Amelia dress as last year? Why, a Stegosaurus of course. However instead of buying a cheapo dino-suit with the wrong dino features, Amelia designed it, she and her mom cut the plates and sewed it with the tail, and Ronnie dyed the fabric.

On volunteering and nature
“Volunteering has given me so much,” said Ronnie reflecting on her years with the Southern Marin Mothers Club and on her experience rescuing animals at local animal shelters. Meeting people, sharing knowledge, giving back to the community – those are words Ronnie believes in.

This past weekend we joined her at the Muir Woods Earth Day celebration where she volunteered with her daughter. Together my family and hers pulled forget-me-nots and cleaned the boardwalks of Muir Woods. On her nature agenda, Ronnie also volunteers at Muir Beach in the summer and plans Earth Day like others plan Superbowl Sunday – with glee and anticipation.

Her experience at animal shelters has also sharpened a wild animal rescue fiber in her and she told me this anecdote. “A few years back, I found an 8 ft nurse shark that came up the bay at Bayfront Dog Park. The Marin Humane Society would not remove it saying it will go back in with the tides but it was there for weeks and getting really smelly. The MHS argued they could only pick up dead animals if they were on the road so some folks dragged the shark into the road. The MHS dragged it back to the waters edge. =)) Ah well….eventually they had to remove it.”

Apart from the dead-shark fun factor, who would care about a dead shark in a creek? Ronnie did and after some research, she found out that leopard sharks swim up creeks around the San Francisco Bay to give birth to their babies in as safe place, get disoriented and die. That’s how she’s found three dead sharks so far. Now she always keeps an eye out for sharks in distress in creeks.

On Ronnie’s favorite places for kids in Marin
In no particular order:

Ronnie’s list offers information for kids elementary age and under and features activities around the Bay Area. In her list this month (February 2012), you can find American hoop dancing at the San Anselmo library, a nature hike in the Presidio in San Francisco and a garden stroller meetup at the UC Botanical Gardens at Berkeley.
To read the list you can subscribe by email and to give Ronnie details of an upcoming event, you can email her.
What blogs does Ronnie read?
Besides Frog Mom of course:)
On chocolate
The best way to end a profile, right? Ronnie raves about the artisan chocolates created by her friend Onie who was trained at Bernachon, one of the most prestigious chocolatiers in France. [I have his cookbook and it’s chocolate and French cake overdose by reading.] However tempting that sounded, you don’t need to fly to France to enjoy these chocolates. You can simply find them online at Alchemy Pastry. If you drool over the photos, it might be worth knowing that Ronnie took them (she does food as well as portrait photography). Now I’ll dream of the chocolate fairy house or the Mexican chocolate and passion fruit marshmallow combo. They def look like they’re worth a mile or two of swim in the bay:)
About the Meet Series: Know of a fab person you’d like to see featured on Frog Mom? Shoot me an email and tell me more.