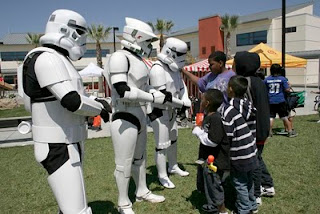 Living in the Bay Area, you can’t help but feeling close to the Star Wars galaxies. Lucasfilm’s offices buzz with creative brains in the Presidio at the Letterman Digital Arts Center, Industrial Light & Magic is there too, and Skywalker Ranch (click here for a visit) is over the bridge in Marin county. That’s like the triple-decker-Star-Wars effect. Now, imagine you’re a die-hard Star Wars fan and you want to get yourself suited up with a storm trooper outfit. Or a lifesize Sith lord costume. Or a nasty bounty hunter ensemble. Or – thrills – the sombre shiny armor of Darth Vader. 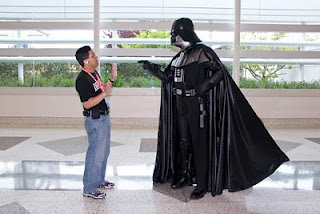 No, a jumpsuit with EVA molded pieces is not going to cut it. There is a way to assemble these officially-George-Lucas-approved costumes and become part of the biggest army of Star Wars villains on earth: the 501st Legion. Self-described as Vader’s Fist, this organization is actually a volunteer army. Bad guys doing good deeds? Yes, these guys get out and about to raise funds for charity. Make that 7,467 costumes worldwide as of June 29, 2010. Each costume is unique and hand-made. Each member gets a Legion ID. 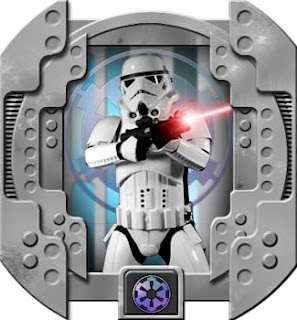 Got your attention now? Believe it or not, three of the 501st Legion’s storm troopers came to my 5-year-old’s birthday party a few weeks ago – and it was the best experience the kids could have had. The guy to the left in the frame, he was the leader of the trio. Super nice guy.

I first heard about the Star Wars volunteers from my friend Sue who had a friend who knew about them. “They came down trees and stormed the place!” she described with glee. That’s all the spark I needed to get in touch with them. Unfortunately she didn’t have their name, much less a contact number. Still, I knew that it would be a blast for a 5-year-old’s birthday party. Why?

I was 12 when I saw The Return of the Jedi on big screen. I immediately fell in love with the movie, with the sets, with this sci-fi uncompromising world. I secretly worshipped Luke and the Force. Despised the Emperor all the same. I started collecting cards, trading them at school. I asked for the LPs for my birthdays and blasted the tunes on my record player (now, I do sound like a dinosaur). I read the novelizations. I subscribed to a sci-fi/fantasy movie mag and pinned the poster of the movie on my bedroom walls (wasn’t easy, they were fabric with padding). The trilogy showed at Paris’ largest screen. I dragged my entire family including my father who couldn’t take it anymore (my mom loves Star Wars) and my two brothers. Seven hours of Star Wars in one sitting! 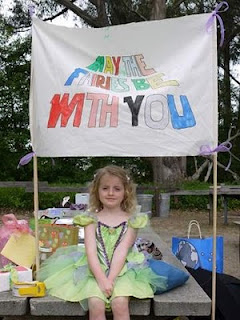 My family took a well-deserved break when I turned my obsession to the Rocky Horror Picture Show when I turned 14. However, that was not the end of Star Wars for me. Just wasn’t collecting cards anymore.

Then life went on. When my girls became preschoolers, I started telling them stories of the Star Wars trilogy sixology (sorry George, trilogy sounds way better than sixology). They loved it all. How could they not? Princess, knights, villains, magic, evil against good, jokes, man-made moons, space travel. I mean – isn’t it great? On a March visit to the San Francisco Public Library, I borrowed a DVD of the animated series The Clone Wars. Without knowing it, I had triggered a Star Wars button in their head. They loved it. When I started planning the birthday party, my junior Clone Wars fan announced: “It’s going to be a Fairy Star Wars party Maman.” Done deal. 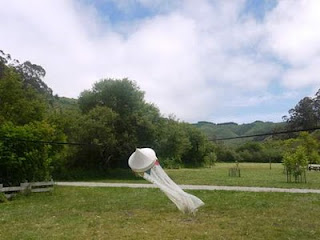 I started looking for the Bay Area volunteer storm troopers and discovered there were two parallel organizations: the 501st Legion for the dark side of the Force; the Rebel Legion for the good side of the Force. It’s Imperial Army vs Jedis. Quizzed on who she preferred, my daughter opted for the bad guys. I then filled the details to request an appearance by three villains.

Shortly after I got contacted by the Event Coordinator at the Golden Gate Garrison. He sent me a list of questions on the event including a stumper: “Are there any restrictions at this location which would preclude costumed members from appearing in helmets and (toy) blasters?” 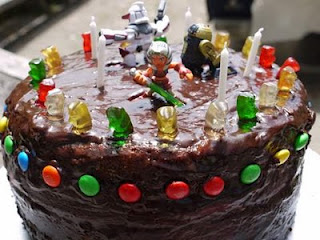 Since the party was to be held outdoors at the picnic area of San Pedro Valley County Park, I set out to reach the rangers and ask them about toy blasters. Over the phone, they did not initially understand my request. They had me repeat “toy blaster” various times, loud and louder, until finally I explained the outfit of a storm trooper. Three phone calls later, the rangers gave us a green light. The Force my friend!

To turn the party into a real Star Wars party, I made a chocolate cake decorated with Clone Wars figurines, got my girls light sabers (including the training DVD, for good hand positioning), built a home-made R2D2 with tubes, silver duct tape and sheet metal from my neighborhood hardware store, and my husband made a “May the Fairies be with you” banner. 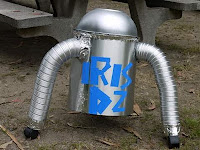 On D-Day, the storm troopers arrived when all the kids were getting wired up. As soon as the storm troopers appeared around the corner and started walking to us, it was like a tidal wave of screams and races. Boys and girls grabbed their light sabers and got on their two feet. My 5-year-old got behind my back and got squirmy. 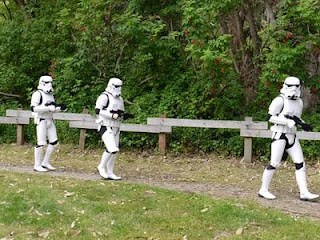 I led her to the storm troopers. “Lord Vader told us it was your birthday.” Silence from my little girl. “Happy birthday!” they said in their android voice. It was great to hear the voices as in the movie. If kids were excited, I was beyond thrilled. The three storm troopers graciously posed for photos with everybody, gently fought off a few enthusiasts and left with a great recommendation that Star Wars fans will appreciate: “Now you be good rebels!”

As  I walked back the storm troopers to their cars, my 5-year-old thought they were taking me to the Death Star and sent a small batallion of pint-size Jedis to protect me. 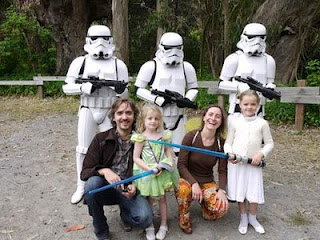 I had the hardest time convincing them I was not being kidnapped and that there was a shuttle back from the Death Star. Certainly didn’t want them to see half-naked Storm Troopers in the parking lot.

When I returned she breathed a sigh of relief. “Mom, you’re back from the Death Star?” Hey, I was not going to disappoint. Yes, with hyperspace travel and all, it’s super quick. “Wow,” she said, “Can I go too when I grow big?”