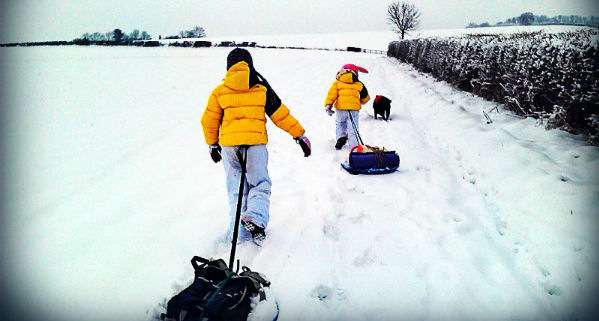 > Meet the Meeks: A Family that Redefines Outdoors Adventures and Green Time

Meet the Meeks: A Family that Redefines Outdoors Adventures and Green Time

Two weeks ago, the Meek family took the world by storm – much to their surprise and to great applaud. Newspapers, TVs and radios all over the world found in this British family of four, with two girls ages 8 and 10, the role models of our nature-deprived times. What the Meeks did was both incredibly simple and quite unique in our fast-paced all-electronics world. They walked out their front door and planned a year of family adventures with their girls. Forget screen time, we’ll do green time instead. During that year, they started a 100 Family Adventures list and that list skyrocketed to international stardom, inspiring people from near and far to follow in their footsteps. I caught up with the Meeks over the phone as they were driving to a meeting after school. They passed the phone around in the family van and I was able to talk to all four of them, the girls included. I hope you’ll love them as much as I do because they’re an awesome bunch.

“Well, before the 100-list, there was a year of planned adventures. We went out every weekend with the girls and as time went by, we started making a list of activities and thought 100 would be a nice achievable number. We tried out the activities and near the end, we got the girls involved. Ella, our 8-year old, wanted to sleep on a mountain. Sometimes, we did whatever activities we could depending on the weather forecast for the weekend.”

The Meeks near Nottingham, a city within reach of an outdoor mecca called the Peak District. I bet you they’ll find that mountain in the near future. I asked Kerry about the weather and how their girls coped with that.

“Now, the girls are happy to go out in all weather. Wet weather. Cold weather. They don’t mind it.”

All weather, did you read that? And we’re talking about an area that sees icy and snowy winters, rainy summers and generally not tropical temps. How did they do it while camping out? Or rather – bivvy-bagging.

“We’ve always enjoyed camping out, but bivvy-bagging made it that much more adventurous. Bivvy bags are a waterproof layer for sleeping bags and we got cheap ones at an outdoors shop. We even created our own family bag, a very large tarpaulin that we laid on the ground and where we put all four bags and the dog. Then we doubled it on top of us and the advention was born – adventure + invention. Bivvy-bagging was a bit nerve-wracking at the beginning because we were used to sleeping under tents, but without a canvas overhead, it was like a closer feeling for all of us. We could talk at night, feel the wind, gaze at stars, all while falling asleep.”

At that point, Kerry mentioned her 10-year old loves space. “She would point at constellations in the sky while we were bivvy-bagging.”

I the told her my own 8-year old was fascinated by the idea of sleeping on the beach, one of their 100-list activities.

“It took us three times to get it right. The first time in Wales, we were on the beach in our bivvy bags and it started raining at an horizontal angle so we gave up. The second time on the Yorkshire coast, flees starting jumping out of our bags and we gave up – again. Third time was the charm. It was in Norfolk on a night full of meteor showers. As we lay on the sand, we each counted shooting stars.”

While sleeping on the beach sounds more like a fair weather adventure to me, I asked Kerry what projects they had in store for the winter.

“We are planning to sleep on a mountain, tube down a river, do a source-to-sea adventure (where you start at the source of a river and follow it to the sea). If it snows enough, we want to build an igloo and sleep in it. Last year, we built the igloo but there wasn’t enough snow to finish it so we just ate dinner in it and then came back in. We also want to paddleboard down a river.”

At the point, I was more than intrigued so I asked if I could talk to one of the girls. Amy the 10-year took the phone and I introduced myself, talked about my girls then asked her what her favorite activities had been last year.

“I think it was coasteering and sleeping on the beach. We saw meteor showers on the beach, you know. That was fun. Do you know what coasteering is? I like swimming and climbing and coasteering is a bit of both. I also really enjoyed drifting down a river. As for climbing, we go to a climb center near our house.” Pause. “It’s not walking distance. You have to drive to it.” I could feel the frown. So cute! Then I talked to Ella, her 8-year old sister. She ‘s the one who suggested sleeping on a mountain for the 100-list. Well, guess what makes her dream?

“I really want to sleep on a mountain. I want the experience, I want to see all the views. It’s going to be good fun! I like sleeping outside. More than sleeping inside sometimes.”

I asked her if she ever got cold outside and the answer was a firm “no”.

“Except that time when we didn’t have our bivvy bags and they didn’t act as windshields. The wind was strong and it was a bit cold.”

I asked her what she liked for breakfast when camping and I thought I heard a chuckle.

“One time, we mixed porridge and brambles.” I think she meant blackberries but I’m not sure. Either way, this 8-year old’s like my 8-year old – a solid porridge (oatmeal) enthusiast. At that point, I heard voices and knew they had reached their destination. Could I talk to their dad Tim before they all got along with the evening? He was out with the dog. I complimented him on how articulate and brave his girls were – not so many kids would take the 100-list with such a positive attitude.

“We started doing this because nowadays, it’s too easy for children to have an easy life. We wanted to expose our girls to challenges. Not to make life difficult for them, but to make them more resilient and ready for the 21st century.”

I like that attitude. Resilience. No thrills. Just go out and have fun. I said goodbye to Tim and promised I’d be in touch. That was our van conversation tonight, hot off the presses.

Last but not least, you can leave your comments here and tell us which of these 100 adventures you’ve done or would like to do with your kids.