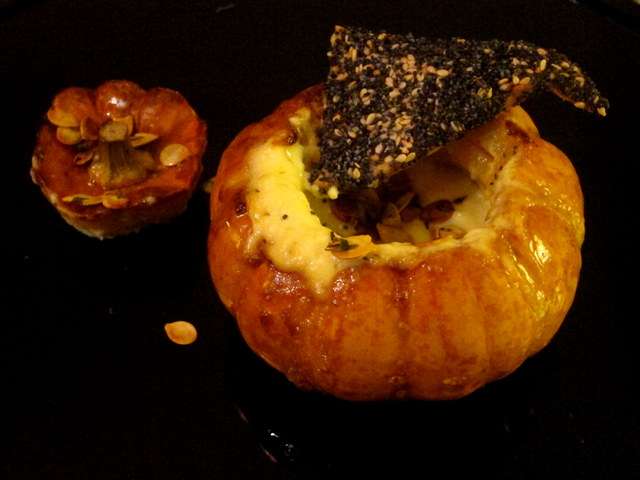 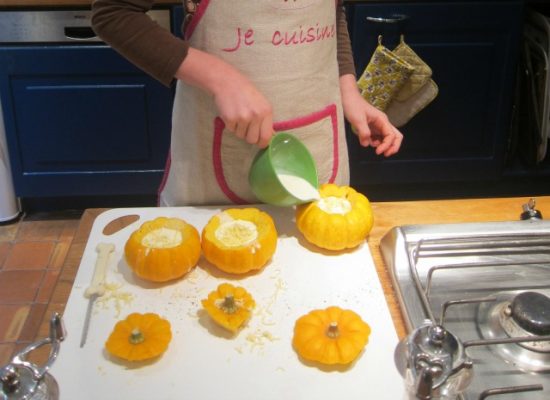 Every autumn, my girls ask for this mini pumpkin soup as they love the idea that the soup is baked and served directly in mini pumpkins. We came up with the idea to serve them with crackers shaped like witches hats for a Halloween twist, but they would be delicious on their own all winter long.

These babies are so easy to make that my 7-year old gleefullly measured, spooned and filled the pumpkins before I put them in the oven. She was very excited about the mini pumpkins until they arrived on her plate, at which point she exclaimed, “But Mom, I prefer kabocha squash pumpkin soup!”

This recipe was inspired by the baked pumpkin soup from The River Cottage Cookbook. It was excellent and the perfect cold-weather soup because of the richness and creaminess of the soup. I thought I’d try with smaller pumpkins just for the cuteness factor and though it’s not quite as good (a matter of flesh I think), it’s quite fun and looks great. Here is how we did it at home.

Ingredients per person – for the mini pumpkin soup