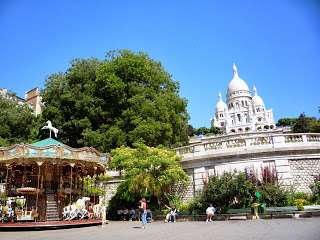 Montmartre is the PR neighborhood of Paris for the world, perhaps more so than the Eiffel Tower since the movie Amelie. And yet Parisians don’t really go to Montmartre because it’s full of tourists and guess what, there’s “nothing to do, eat or see” there.

Because of that, I didn’t know Montmartre very well and could have stopped at the Sacre Coeur basilica and the Place du Tertre with its minute-painters and cobblestones.

So I kind of got lucky when my good friend Antoine Techenet, Parisian native and living on the other side of Montmartre hill, took me around with my girls.

With an MBA from Louisiana, Antoine is a highly qualified professional who occasionally guides Americans in Paris, offering tongue-in-cheek and witty Paris tours with a Parisian. A treat for the secret-Paris savvy.

First things first, we picknicked at the Parc de la Turlure behind the Sacre Coeur basilica and off we went.

Standing in front of the dozens of easels of the Place du Tertre as if on the set of An American in Paris, I learned that a poor guy was beheaded right where we stood. Thrill. But wait! He wasn’t just beheaded. He bent over, picked up his head and walked three miles before laying down on his burial site, location of the present day St Denis basilica where all kings and queens of France are burried. We’re talking about the legend of Saint Denis of course. My girls didn’t like the idea of someone losing his head right there but were very impressed by the carrying-the-head part.

We then proceeded to one of Paris’ great examples of Austrian Secession architecture at the corner of Rue du Calvaire and Place du Calvaire.

Further down is the Moulin de la Galette, immortalized in 1876 par Auguste Renoir as a drinking establishment. As Antoine explained, this is how flour mills were converted after people stopped bringing their grains to be milled.

At the time, Montmartre was still a farmer’s hamlet outside of the walls of Paris and the working class walked up the hill for cheap wine, one night stands and waltzes.

As we stopped in front of a fenced-in garden, Antoine lifted his ey ebrows and whispered “this is where Johnny Depp and Vanessa Paradis live.” My heart missed a beat. But then, Antoine promised never to reveal where they truly live so who knows?

Further was Marcel Ayme’s Passe-Muraille, the sculpture of a peculiar bronze man stuck between two walls courtesy of French sculptor and surrealism icon Jean Marais, also a major actor and Jean Cocteau’s lover. As my girls were getting tired of the walking, Antoine took us to a nice shaded playground at the Square Buisson next to the avenue Junot, a grand avenue lined with million-euro artist “pads”.

At that point, my girls were ready for their sugar fix so we parted with Antoine and headed to Paris’ oldest candy shop…