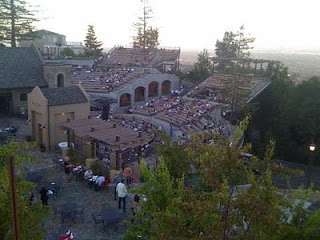 During the first song-set of his concert at the Mountain Winery in Saratoga, Rufus Wainwright requested that spectactors do not applaud until he had left the stage, his departure being part of the piece too. “All Days are Nights: Songs for Lulu” was an hour-long tribute to his recently deceased mother on a backdrop of eye close-up visuals by artist Douglas Gordon. Weird visuals, these giant eyelids opening and closing slowly. the music was appropriately dark and broody. Rufus’ voice expressed grief and emotion, the piano’s keys seemed like his fingers’ natural extensions.

Resisting the urge to clap, spectactors sat silent. Not a whisper was heard. Only the loud chirping away of crickets violated the singer-songwriter’s wish. As I got up to find the restrooms, I paused to listen. A coyote was howling in the night. What kind of concert theater offers that kind of experience?

The Mountain Winery has got itself a sweet deal above the Silicon Valley. Sweeping views, attached vineyards, state of the art amphitheater and sound system. Even seats are comfortable.

The Summer Series has attracted music legends such as BB King, Ray Charles, Billy Idol, Diana Ross (the oldies) but also the newer generation with The Crowded House, Natalie Merchant and Rufus Wainwright. In September Sheryl Crow will perform there and the only Northern California stop of A Prairie Home Companion‘s Summer Love Tour is tonight at – you guessed it – the Mountain Winery. How do they attract such big names?

It’s still a puzzle to me because the ticket prices are not outrageous but I understand why people keep coming back despite slashing reviews on Yelp. Amongst the major complaints: the $20 parking charge, overpriced wine in plastic tumblers, bad food, the bottleneck exit of the parking lot and a nutty 10.30 pm lights-off policy that resulted in BB King being cut off in the middle of a song.

None of those were terribly inspiring so my husband and I just had dinner before and met in Saratoga at a parking lot so we could avoid paying double parking fees.

Once you get over the sheer capitalism of it all, I’ll say that it’s pretty rare to listen to a world-class performer at an open air venue with views of the Silicon Valley. Add to that a tumbler of wine or beer under clear skies. At night the valley’s a freakin’ light show and looking down on Palo Alto through the shadows of the trees is downright magical. It’s a bit like being on a window seat on a plane minus the bumpy ride.

The Romanesque winery building offers an old world feel while oversize Paul Masson wooden barrels flank the arched walls of the amphitheater and give it a rustic chic touch. Obviously the lighting system has been handed to serious professional hands as the venue looks straight out of a decorating magazine at night.

VIPs and donors get special privileges such as private patios, stage-side terraces and comfy couches for al fresco dining. You and I can spend top $ at the Grill/Bar, Chateau deck, Winery Bar or Marketplace Bistro – or dine before.

In fact, the whole food and drink offering has been very well thought out with top-to-bottom branding. In addition to the four dining venues, people just walk around between Mountain Winery food and drink stalls peppering the grounds.

Business partnerships improve the basic wine offering. Coke is well-represented with its sodas and Dasani water bottles sold at $4 (while there are drinking fountains by the restrooms with better quality tap water) and Sierra Nevada and Blue Moon have big sign boards and a brewery-style bar for the non-wine drinking crowd. Once you have your tumbler in hand, you can head to your seat and drink while enjoying the concert. Each seat is equipped with a cupholder. That’s the life.

I can see a downside to the amphitheater being such an open space though. Martha Wainwright – a very talented singer – was doing the first part of the show. Sadly for her, she was singing in front of a half-empty (at best) amphitheater. People were still trickling in, getting the lay of the land, buying their drinks, and many were watching the singer from the balconies that surround the stage. That’s the lot of first parts, I know, but it must still be disheartening for a performer that the audience is so scattered

As Rufus Wainwright was closing his show, we literally jumped from our seats to rush to our car, so nervous we were about getting stuck in the parking lot. Just our luck, Martha was coming back on stage to sing with her brother. We paused on the access ramp, half-regretted our move and left.As I mentioned, the Mountain Winery is located in Saratoga. If you don’t live at the foot of the hills in one of the McMansions, you’ve got a good bit of driving to do to get back home. For people like us living near San Francisco, it’s an hour’s drive away. Too bad it ain’t closer – but then it would be in the fog.