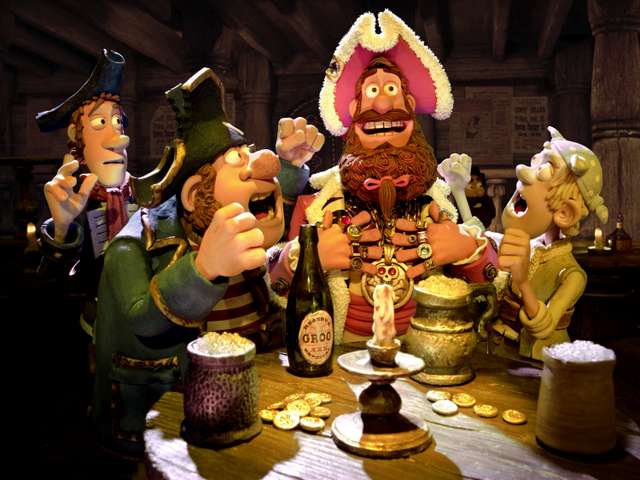 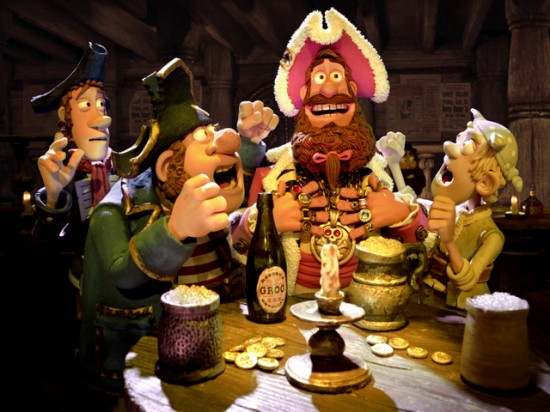 What’s the best part about being a pirate – the plunder? the looting? scurvy? scantily-clad mermaids? Believe it or not, it’s Ham Nite. Literally, eating a leg of ham on a pirate ship. On these goofy premises, The Pirates! Band of Misfits unrolls 88 minutes of a seriously wacky stop-motion pirate movie. All the pirate stereotypes you know surface at some point in this British movie directed by Peter Lord (of Chicken Run fame). However what you don’t expect is the anachronism of pirates plundering the Seven Seas during the reign of Queen Victoria – and that’s where the plot thickens like Irish oatmeal. For one, there’s the much-coveted Pirate of the Year Award. For two, Queen Victoria hates pirates. See how the story ties these together. We took our 6-year old and 8-year old girls yesterday and loved it.

We’re big pirate fans in our family. We dig the Northern California Pirate Festival. We visit the Pirate Store in San Francisco. We love Capt’n Jack Spareribs and his spoofs of the best-known pirate in the Caribbean. We’ve visited the ship used in Pirates of the Caribbean. And every single visit to Disneyland includes several turns on the Pirates of the Caribbean ride.  Pirate enough? Obviously, it’s with excitement that we went to see The Pirates on the opening weekend in San Rafael.

Voiced by Hugh Grant, Pirate Captain may not be the sharpest knife in the pirate drawer but it’s not the worst either and his crew loves him. On Ham Nite, he can sword-slice the entire ham for his crew in the air and when sighting other ships, he launches the attack himself with bravado and his flamboyant beard. His self-esteem takes a hit when his ship docks at Blood Island and he enters his name for the Pirate of the Year Award. How can out-pirate the deadly Cutlass Liz who stole the biggest diamond in the world or the incumbent Black Bellamy who makes a dashing entrance riding a whale in port and spilling his treasures into the pirate pub?

Disheartened and ridiculed, Pirate Captain decides to raise the stakes and win the award despite the odds. He raids all the ships they meet but tough luck awaits them – from the leper ship to the geography field trip ship or the ghost ship, none seem to have gold on board. That’s when they attack the ship of Charles Darwin and their luck turns because Pirate Captain’s parrot happens to be …. the extinguished species and extremely rare Dodo. They all sail to London for the Scientist of the Year Award and meet Queen Victoria, the biggest fattest pirate hater in the world. Complications ensue and the Dodo ends up causing more havoc than anybody would have guessed.

I can’t tell you the rest, you need to see the movie to find out.

First, the animation. It’s so beautiful, especially the London scenes around foggy streets and Diagonal Alley-worthy pubs. Have you seen Wallace & Gromit? If you have, it’s the same Aardman Animation studios that made The Pirates and you can tell. In its review, the Los Angeles Times reports that “Stop-motion is so labor intensive it took the filmmakers a full 18 months to film a key scene in a piratical pub. The gang’s trusty ship is so tangible it weighs 770 pounds and the Aardman team used 220,000 tiny props and 250 puppets to bring the world of circa 1837 buccaneers to life.” Ain’t that wonderful? There, amazing animation.

Two, the soundtrack. Where else do you pirates sailing across the globe to London to the music of The Clash’s London Calling? When Pirate Captain hits a low in the story, it’s the Flight of the Conchords’ Don’t Cry song that follows Pirate Captain’s sad quest to find his Dodo bird, the heart and soul of the ship.

Three, the humor. On Blood Island, one of the seaside stores’ signs reads “Napoleon Blown Apart – Purveyors of Dynamite”, a reference to you-know-who and perhaps a certain punk-rock band. When the pirates sail the seven seas, they launch little red buoys on the seas that appear on the vintage map as so many red dots following their voyage. As the pirates approach the London Docks, an animated wooden Queen Victoria waves hello to the visitors and pivots around to reveal a blood-thirsty queen holding a severed pirates’ head framed by flames. How deliciously fun! Like most animated movies nowadays, the dialogues and images are a string of puns that target both the kids and the grown-ups but none of it seems forced or unnecessary.

Four, the story. The plot twists and turns and twists and turns and is not entirely predictable. Of course we rooted for the likable Pirate Captain – I mean, such a great name and his sidekick Number Two is as fun. The movie bounces between Broadway pirate scenes, Victorian London science shows, candid sea plunder, the gullible Charles Darwin and the evil Queen Victoria.

Ah yes, that’s a big call to action but honestly you won’t regret it. If you are on the fence, watch the trailer and make up your mind.