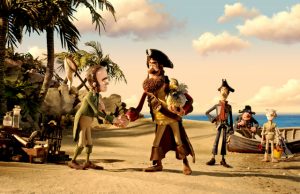 Darwin (voiced by David Tennant) and Pirate Captain (center, voiced by Hugh Grant), as well as Pirate With Scarf (voiced by Martin Freeman), Pirate with Gout (voiced by Brendan Gleeson) and Albino Pirate in THE PIRATES! BAND OF MISFITS, an animated film produced by Aardman Animations for Sony Pictures Animation.