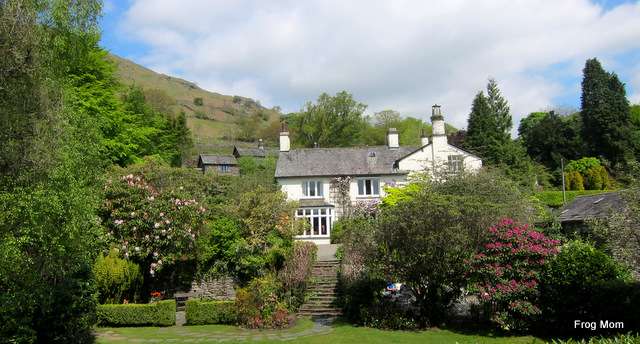 The Lake District is associated with a few iconic names. For walkers, it will be Alfred Wainwright. For children, Beatrix Potter is the queen of country animals. For poetry lovers, William Wordsworth gives a voice to the hills, lakes and daffodils. The poet had five children and lived in a few houses around the Lake District, the last one being Rydal Mount where he lived from 1813 to his death at age 80 in 1850. His sister Dorothy used to say that Rydal Mount was a paradise for children. And it is. My 9-year-old’s favorite part was the garden, “because there was lots of grass for somersaults and nooks and crannies to play in. It’s such a big garden for such a small house!” Hills, flower beds, ancient trees, benches overlooking the lake, bushes and a “treehouse” at the top, terraces and stairs and alleys – you could spend a half-day in that garden and forget about time. Here’s my daughter’s ‘s account of Rydal Mount’s visit.

That morning I wasn’t very happy to visit a museum but then, my sister was grumpy because we had fought earlier. So when my mom parked the car at the museum, we both refused to get out. Of course we had to get out and walked over to the little cottage to buy tickets. There the lady asked if we wanted a children’s quizz to visit the house. My sister, still grumpy, refused but I decided to be happy and took one with a pencil. Luckily, we were the only visitors that morning apart from two other people.

The visit started in front of the house by the entrance door. There was a mosaic on the floor and we had to guess what the words meant. We guessed right – it was in Latin, we figured it out with my mom – and walked through the hallway. The first room was the dining room where I had to guess the use of two oil lamps and find initials on a wooden door. It was easy and I liked that the museum was a really nice house with things we might use as a family. It was also neatly organized whereas our home always looks messy. In the drawing room, the quizz asked to find a bell and by then, my sister was in a better mood. I spent some time drawing Wordsworth’s cutlass chair, a funny chair that was both square and round. I’m sure it was very uncomfortable to sit in.

In the hallway below the stairs was a cabinet with Dorothy’s shoes, a picnic lunch box and stuff for dolls. My sister really liked the small things for dolls but I didn’t spend much time with her – I had to answer the next questions. On the way to the upper floors, I had to find an ancestor of William Wordsworth and that was tricky – I went up and down the stairs five times!

On the second floor, there were two bedrooms: one for Dorothy and one for someone else. With my sister, we played at who slept in which bedroom and I got the nicest one, Dorothy’s bedroom. Its windows looked out on the garden and I would have loved to live there. Since my sister is smaller than me, she got the smaller bedroom called Dora’s bedroom. The floor was all funky and uneven in her bedroom. Mine was very nice and had a big mirror. The house “guardian” told us that Wordsworth’s family still owned the house and later that  week, some of them were coming to spend the weekend. That’s why we couldn’t go behind some closed doors. Lucky them!

On the last floor was Wordsworth’s study in the attic. His desk looked out on Windermere and the valley. That was a real desk for writing.

Then came my favorite part – the garden! With my sister we started running around and doing somersaults. I continued my quizz a little bit but I wanted to play so I asked my mom to go find the next clue – a place where Wordsworth went and what he did there. He wrote poetry in the Summer House! There’s a sign there but actually, I think that they made this up. How would they know now what he did then? Most likely they’ve forgotten, it was so long ago. While my sister split grass blades into smaller grass blades – boring, I ran around, did cartwheels and had fun in the sun. In the meantime, my mom took pictures and walked around the garden.

When she came back and said we had to leave, I didn’t want to. I was happy there. I really liked the gardens. The sun was shining, the garden was quiet, we were in tee-shirts and no bugs bothered us. It felt like we’d just arrived! But my mom wanted to go on a hike – surprise – so we left. Right when we stepped outside, my sister saw a little white lamb in the next house’s driveway. It was the cutest baby animal, all fluffy and wobbly and we both wanted to pet it so we ran around the museum to get closer. Too bad, it got scared and fled.

Rydal Mount was a real nice house, it felt lived in and cozy like a home. I know I didn’t want to go but I’m happy that we did. I bet other children would probably like to visit it too. You should go with your family and spend lots of time in the garden.