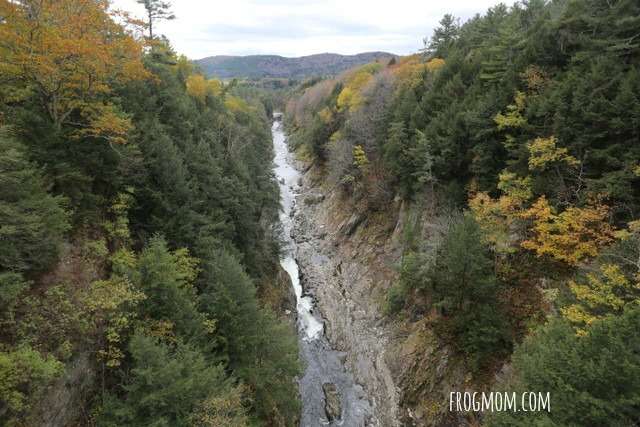 After an exhilarating zip line ride in snowy trees, we are leaving Vermont with a last hurrah — a visit to one of Vermont’s famous (maple) sugar houses and Queechee, the town famous for its river gorge and its covered bridge. The state of maple syrup had a few more surprises in store for us.

On the way out of Williamstown, VT, we waved goodbye to the creepy Victorian house that was falling apart at the seams. This would make an awesome – if very unsafe – Halloween haunted house. 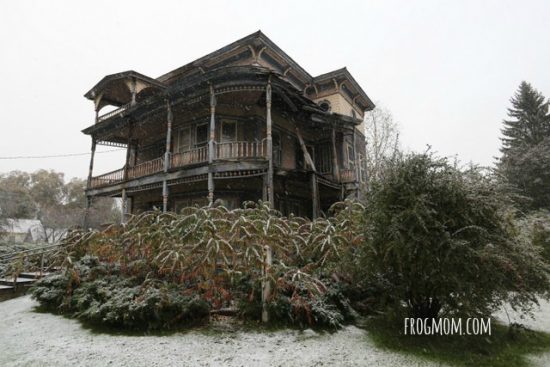 Along the road, we also spotted a rafter of wild turkeys and I couldn’t resist taking a pic. We never see wild turkeys outside of the US and these birds were positively huge. They were also quite camera shy and as soon as my husband got out of the car to take a picture, they scurried gobble gobble into the bushes. He had to gobble gobble hurry and snap away. 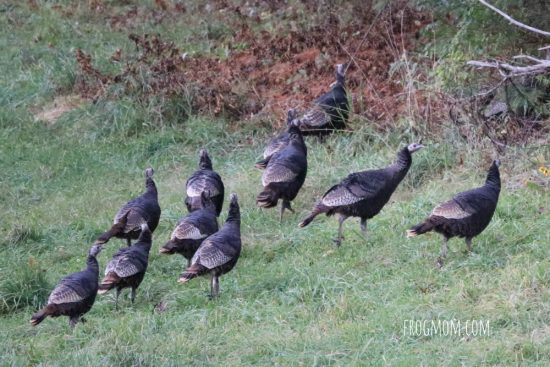 Victorian haunted house, check. Turkeys, check. Now we were truly on our way to a much awaited breakfast at a maple sugar house. 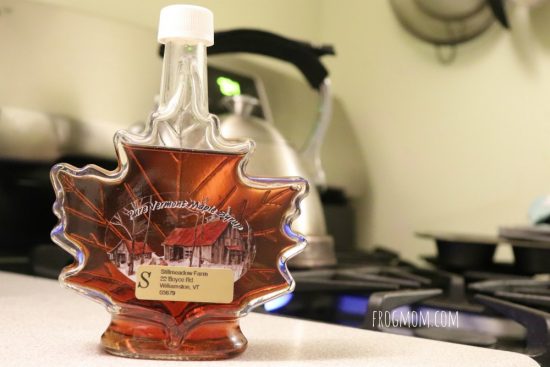 When we were staying in Grafton, VT, the prettiest village in Vermont, one of the many recommendations of the night reception clerk was a sugar house where they served hot pancakes with “the best maple syrup.” I had made a mental note and it was now on our itinerary. However, if you type sugar house around any Vermont town on Google Maps, you will find that sugar houses and sugar house restaurants are literally everywhere. Thus, when visiting Vermont, this made a great family-friendly stop with a local flavor.

In South Royalton, VT, Eaton’s Sugar House has forged a reputation for being a popular local spot attracting both tourists and Vermonters. When we stopped and parked our SUV among pickup trucks, we didn’t expect to see too many tourists off season. 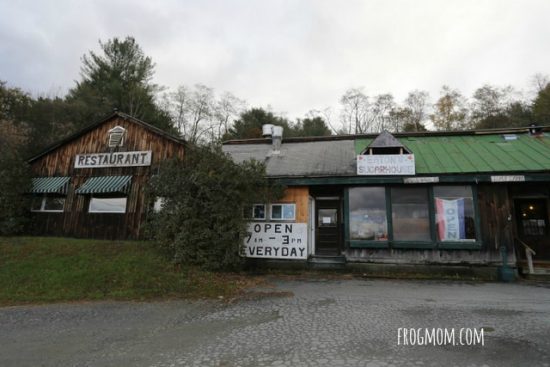 The building had a ramshackle appearance, what with weathered wood and handmade signs, rustic covered barn and windows of all sizes. Past the front door, we walked by a sort of semi-industrial kitchen where two men were busy boiling maple syrup although I’m not sure why they would do that in November. Maple season is in February-March. Was it just for show?

Down the hallway, we walked through the giftshop (more on that later) and reached the restaurant area. Pancakes, here we come! 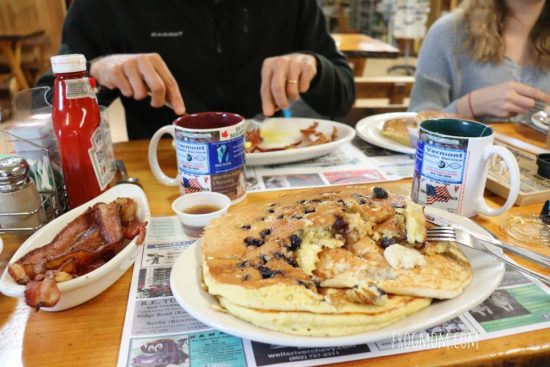 Now, the pancakes were obviously the breakfast item everybody went for but this restaurant also served omelets, several breakfast packages and, wait for it, fried steak for breakfast. Who in their right mind has fried steak ever, let alone for breakfast? I ask you. Sounds like a coronary failure waiting to happen. I looked around to see if others had ordered the fried steak but most old men around us were wolfing down regular huge breakfast combos with pancakes, eggs, fried potatoes, sausages and bacon.

Because I was hungry, I ordered three different varieties of pancakes: blueberry, buttermilk and buckwheat. The best was by far blueberry as the berries were numerous, plump and juicy. Buckwheat was quite light and buttermilk, OK but not exceptional. I also ordered a side of bacon which was delicious but overkill. Obviously, I was stuffed by the time I had finished.

My family was much more reasonable as they ordered short stacks of silver dollar pancakes (half the size of a regular pancake) and for my oldest, an omelet with hash browns. Only she got fried house potatoes instead. That’s OK, they were very good. 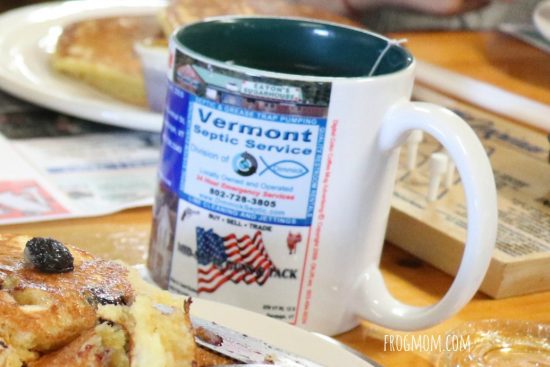 See this house mug? All house mugs were sponsored by local businesses and gave us a good laugh. Where else do you see ads for towing services, a health practitioner and septic services on a mug of tea? Absolutely hilarious and a clever local marketing ploy. For the tea drinkers in you, note that tea was served diner-style like coffee – as much tea as I wanted. 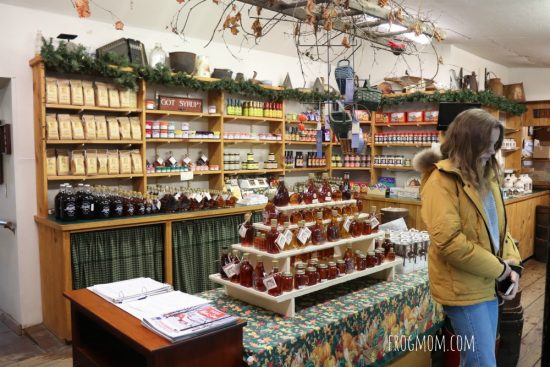 The gift shop sure provided great entertainment for us visitors, from the fantastic selection of maple syrups and maple candies to corky cowboy bumper stickers or, my favorite horror sight, the kids’ toys section with plastic assault rifles and hunting knives. Good grief, Charlie Brown! I couldn’t resist getting a miniature wooden log cabin incense burner with fir incense cones for home.

Finally, we left Eaton’s Sugar House and went on our way to Queechee.

The name Queechee has a very nice ring to it, I just loved how it sounded. The town of Queechee was built along the Ottauquechee River in Vermont, Ottauquechee meaning ”swiftly moving water” in the language of the Abenaki Indians. Our first stop was the Queechee Gorge.

From the Queechee Gorge Visitor Center, we had three different trails dubbed my youngest daughter as the worst trail (gorge bottom), the no-view trail (the dam) and the best trail (bridge above the gorge). We started with the no-view trail and walked a few minutes to the dam. 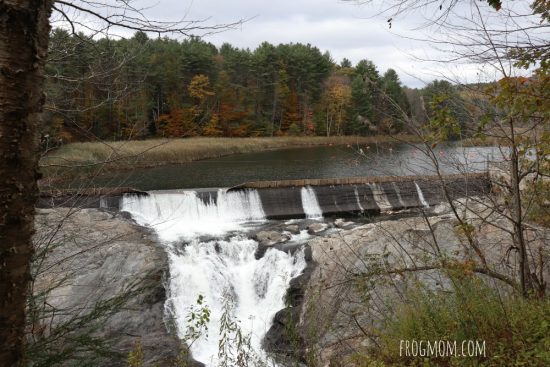 Oh dear, looked like someone had breached the wall. It was definitely overspilling. Since there were signs everywhere about water levels that could rise rapidly, we sort of wondered if they were going to fix the dam or wait for the breach to be complete and the prophecy to happen. 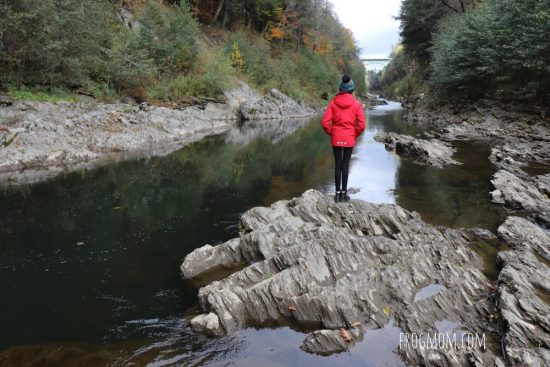 Next, we walked back to the trail junction, under the bridge and on to the other side until we reached the worst view – the bottom of the gorge. It was actually really lovely! The water was clear, slow-moving and a shy ray of sun was waiting to pierce the clouds to liven up the fall foliage. 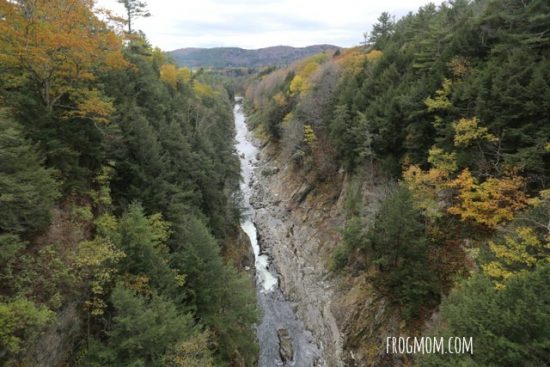 Last, we backtracked, walked up a few steps to the level of the road and walked onto the bridge. In the middle, the view was quite nice. Road crews were hard at work on the other side of the bridge, installing anti-suicide fences, while a sign at the entrance of the bridge cautioned anybody with dark thoughts to remember that they were not alone, followed by a helpline phone number.

I shivered to think about the number of suicides there must have been to result in this sort of warning.

Another covered bridge in Vermont! This bridge was built in 1970 and it’s a two-way bridge with pedestrian walkway. We drove through it on the way to the gorge. I admit that it was quite a thrill driving on a covered bridge and I deliberately slowed down to enjoy the experience. Coming back into town, I drove through it yet again and parked right beside it before our next stop. 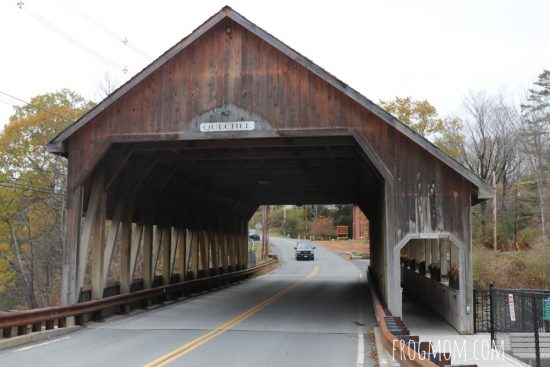 Our next stop was the Queechee’s Simon Pearce Glass Blowing Factory, a tourist destination in this sleepy village. Housed in the refurbished old mill above the dam in front of the covered bridge, this factory was recommended to us by Don’s friend Lisa as a great lunch place. True, the restaurant had a fantastic view of the covered bridge. 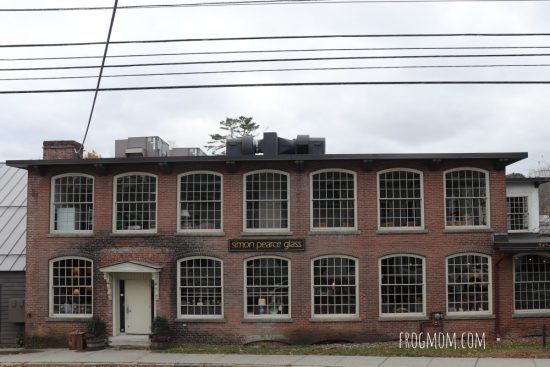 As much as the outside of the building looks post-industrial, the interior is worthy of high-end interior design magazines — exposed beams, rustic wood floors, blown glass lampshades with copper color lightbulbs and very high ceilings. While we waited for our table (we got a buzzer from the reception desk), we walked around the shop and the glass blowing facility downstairs. 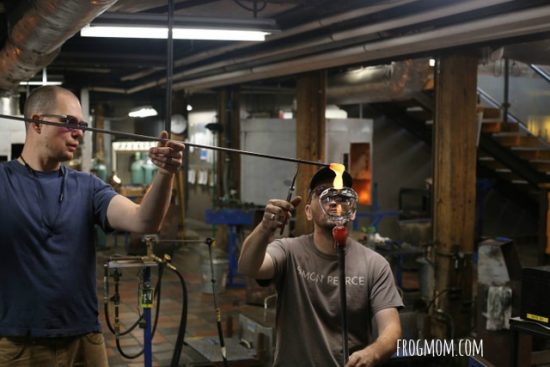 Though I’m not a blown glass fan, I enjoy glass being blown and shaped by artisans. It’s a rare craft and we could have stayed a long time watching vases and glasses coming to life with identical dimensions and shapes. The shop was a true wonder for the eyes but the sticker shock was brutal. Like, $80 for a glass? $800 for a wooden bowl? We were extremely careful not to break anything. Lunch was nice but as my youngest daughter said, “it’s one of those places where they charge you extra for so-so food because the setting is nice.” True enough, I don’t think I’ve had such a small soup owl ever but it was tasty.

This was our last true stop before crossing into Massachusetts and finding our next destination – Savoy Mountain State Forest.

For a quintessential New England experience, we stayed at a log cabin but there’s so much to say here that it will make it into a stand-alone blog post.

Besides Simon Pearce’s restaurant, we were camping for the next two days so we stopped at another supermarket, Market 32, to stock up on camping food. This one was run by Price Chopper, a New York-based chain of supermarkets with very pleasant layout inside, nice lighting and this chain has introduced a series of green and energy-saving initiatives. Not that you would know it shopping for apples, but it’s makes for a nicer shopping experience once you do your research. (My husband, who’s working in the retail industry, was really excited about this supermarket and researched all of it in the sausages aisle.) 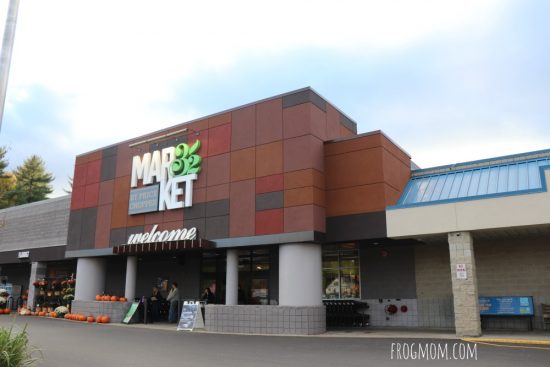