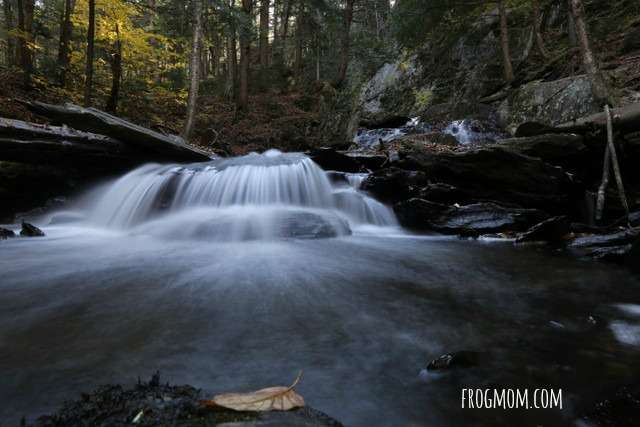 The upside of staying in the Berkshires during two days was that we could finally hike some leafy trails and hope to experience fall colors, even if strong winds and rains had already stripped entire hills of their foliage. Both Mohawk Trail State Forest and Savoy Mountain State Forest are famous for their fall colors and we opted to start with a morning hike at Mohawk Trail State Forest, where the tallest trees in New England are, then explore Savoy Mountain State Forest where we were staying, to see the highest waterfalls of Massachusetts.

It took me a while to wrap my head around the name of this park. How could a state forest be a trail as well? It turned out that there was a historical explanation. The Mohawk Trail was a trade and travel route used by Native American people of the Northeast, much like the Silk Route. It  that connected the Hudson and Connecticut River valleys. 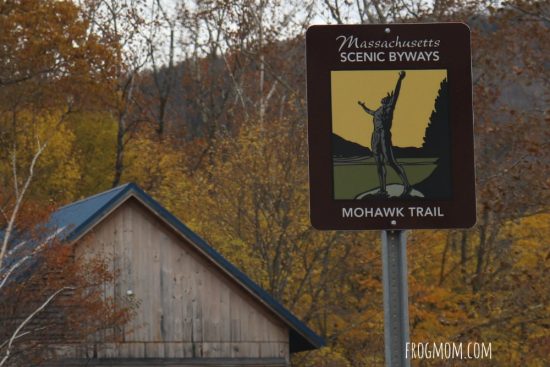 No longer a walking route, the Mohawk Trail has become a scenic tourist route and Massachusetts Route 2, a lovely route peppered with a few dubious “Indian” stores displaying tall teepees, signs of the commercial exploitation of Indian heritage between Greenfield and Charlemont, Mass. 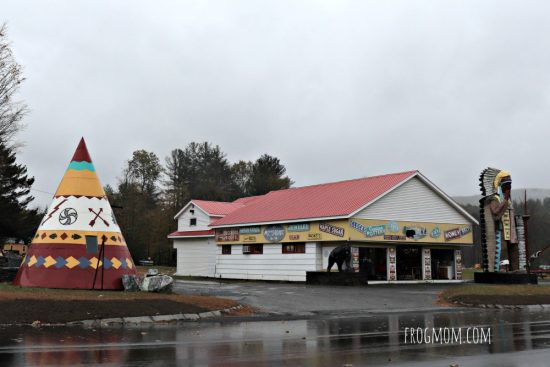 They look extremely anachronistic too and straight out of the 1950s.

To get back to a more natural approach, Mohawk Trail State Forest would allow us to walk part of this trail but I wondered, given such a mighty name, what would we learn about the local history and Native Americans? 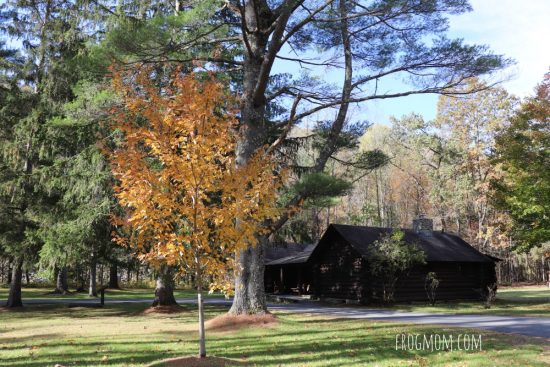 We parked by the picture-perfect visitor center, another great building by the Civilian Conservation Corps built during the 1930s, as were the log cabins at Savoy Mountain State Forest. The ranger on duty gave us a quick rundown of the trails before we laced up our shoes and hit the trail. 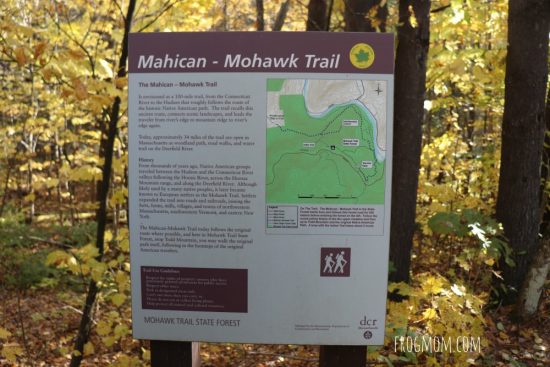 We started with the Mahican – Mohawk Trail, where a sign explained the historical importance of the Mohawk Trail illustrated with a topo map of the area.The Mahican-Mohawk Trail is a long-distance hiking trail under construction and when completed, will reach from the Connecticut River to the Hudson River. This was the only time in the park that we saw Native Americans referenced.

In hindsight and after doing some research, it was a piss-poor attempt at showing the importance of this trail and how it played a part, not only in Native American trade, but also in the French and Indian wars in the 1750s and as a pathway between watersheds. It was a missed opportunity that would have made the park relevant for future generations. As it was, we barely stopped a minute in front of this sign before carrying on. 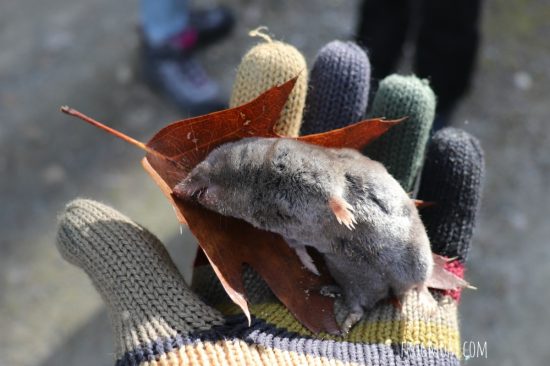 Within a few steps, my girls spotted this Woodland vole, (Microtus pinetorum), a small mouselike rodent of the eastern United States. This specimen was frozen stiff on the ground and I picked up to take a closer look. It was very adorable and very dead, so I laid it on a leaf on the trailside.

We followed white markers on trees and entered the forest, ablaze with yellows and oranges. Mohawk Trail State Forest features old-growth forest and, dodging exposed roots on eroded trails, we walked under these tall trees admiring the variety of trees as we went. I couldn’t have identified all of them but through our hike, we walked under red and white oaks, black and yellow birch, red spruce, sugar maple, white ash and hemlock trees. 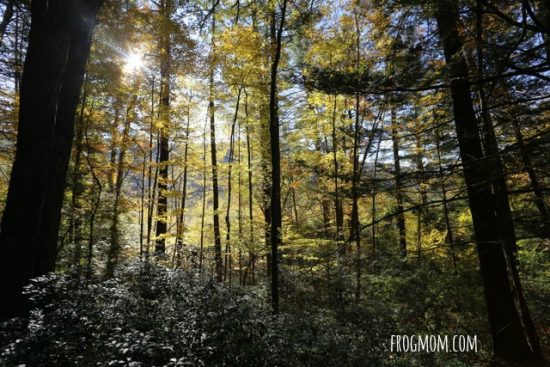 When the forest trail connected with a wide fireroad, we spotted this sign with a couple of tombstones behind it. 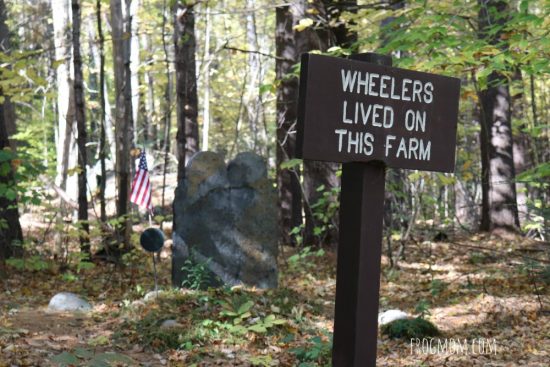 First of all, who were the Wheelers? Second, this was a farm? It was confusing at best. Lacking any explanations, we were left to our own devices, trying to guess what this marker was all about. Again, I researched it online and found that Mohawk Trail State Forest was connected to the European settlers of the area who lived on homesteads adjacent to the Cold and Deerfield Rivers after the Revolutionary War. There was indeed a metal marker saying “Soldiers of the Revolutionary War” next to the stones. Revolutionary war veterans were often paid in land and the John Wheeler homestead at the east end of Mohawk has been documented because the Wheeler gravesite and Wheelers played a role as the ancestral family to five American presidents, including the two Bush presidencies. What do you know, eh? 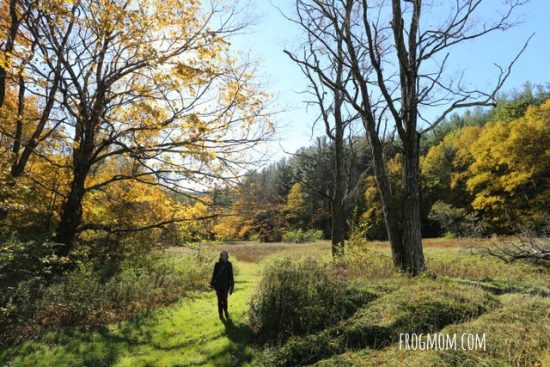 We reached a gorgeous meadow lined with tall trees before entering the pine plantation and getting to the river. After the river (and a view on the bridge), the trail started climbing very steadily and actually, quite steeply to the ridge. “It is a flat trail,” the ranger at Savoy Mountain State Forest had said. Sure. My girls kept questioning our sanity as the going got steeper and we had to use our hands around eroded portions. 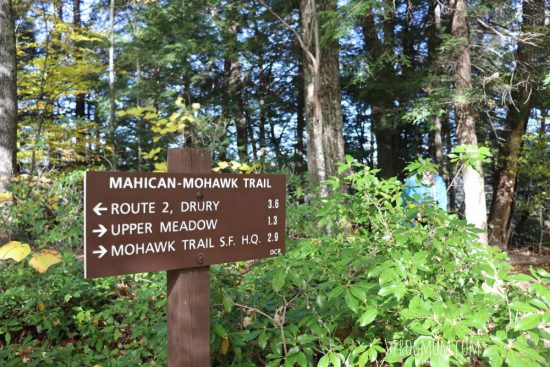 Finally, we reached the ridge and spent the next 40 minutes going down an even steeper hill all the way to the gorgeous campground. ‘Tis really a shame it was already closed for the season as it was beautiful. 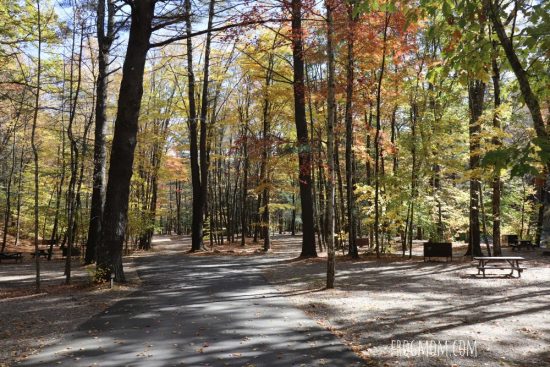 In Savoy Mountain State Forest, we were lucky to hike two different trails.

Perhaps the poster child for Savoy Mountain State Forest, Tannery Falls was remarkable both for the height of its falls and for the fact that we could see two different streams cascading in separate waterfalls connecting at the bottom of the falls. That’s quite rare and given how short the trail was, made this hike totally worth it. 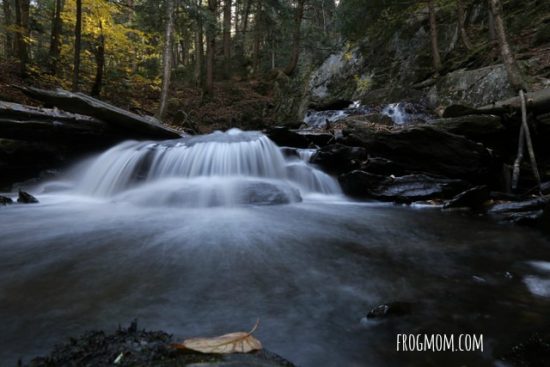 From the car park, we followed a faint dirt trail that followed some fencing over the Ross Brook and its dropoffs. The trail then descended down a series of steps eventually reaching its bottom between both Tannery Falls and Parker Brook Falls. With my girls, we spent a lot of time at the bottom of the falls admiring Tannery Falls on one side and Parker Brook Falls on the other side of the same trail. 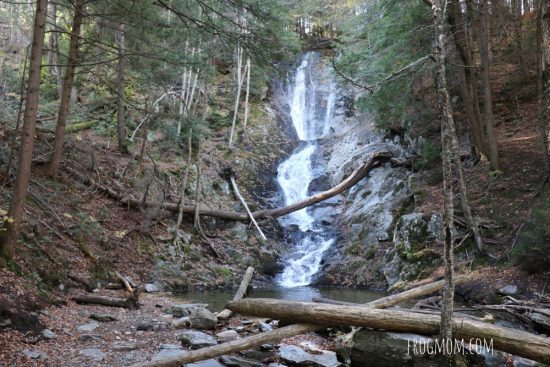 Advertised by the ranger as “one of the most popular trails of the park,” Bog Pond trail was part of a longer loop we hiked in the second part of the afternoon. The weather was crisp, the skies overcast and we needed to get our legs moving after too much driving the previous day down from Vermont.

This hike took my husband and I a little over two hours, our girls preferred the warm and cozy atmosphere of the log cabin to while away this autumn day. 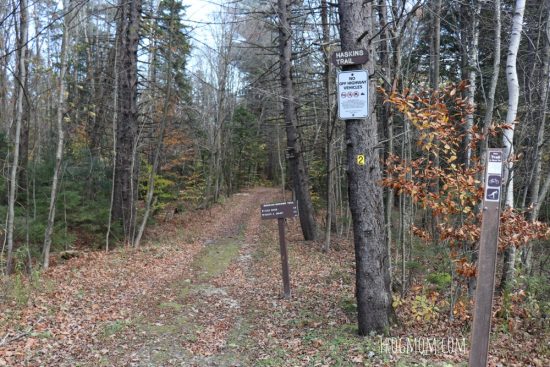 Haskins Trail started off very promisingly. We could easily follow the blazes on the trees, the trail was dry and there was no ambiguity possible. The Haksins Trail was named after the Haskins Family, early settlers of Savoy Mountain. Dennis Alcott “Ali” Haskins and his family last lived on this 1,000-acre farm in a rambling 22-room farmhouse up until 1955, when it was soon after torn down and the present-day campground was created on the site. 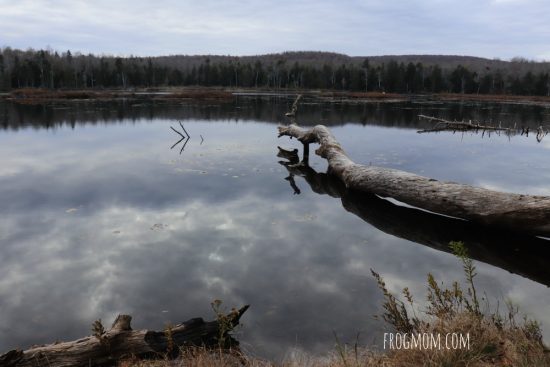 From Bog Pond Trail, we were treated to mirror like reflections of logs and clouds on the surface of the pond, though the bare trees in the background screamed winter rather than autumn in this part of Savoy Mountain State Forest. My, it was dreary. 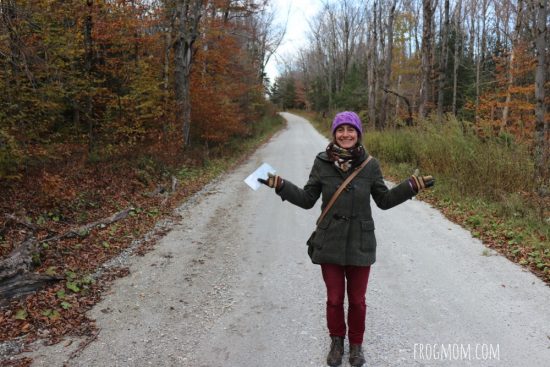 After Bog Pond Trail, things went slightly haywire. We couldn’t find the entrance to Sucker Brook Trail as it was very overgrown and once we did, found that it was a muddy and boggy mess. In fact, it was a boggy mess pretty much until the end of this loop. 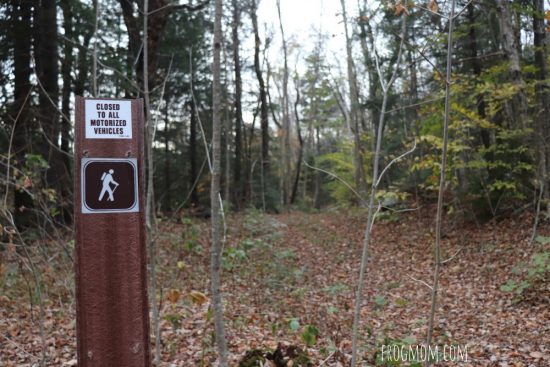 Tyler Swamp Trail was easy to find from the fireroad but exposed roots, boggy puddles and piles of leaves made the going more a slog than a saunter. In fact, I was dragging my feet through the leaves and that was so noisy that my husband and I couldn’t converse. My, how loud dead leaves can be when in numbers! 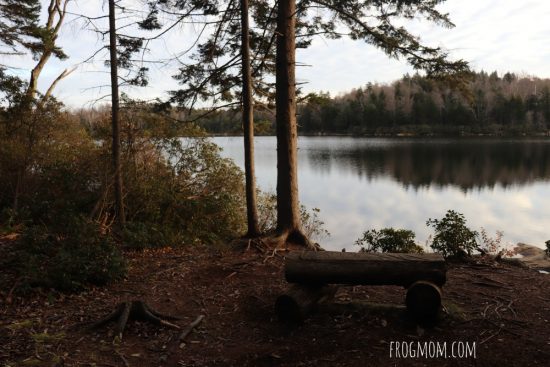 Eventually, we reached this sweet reward – a log bench by the shores of South Pond. Had we had our swimming costumes, a dip would have been in the cards. 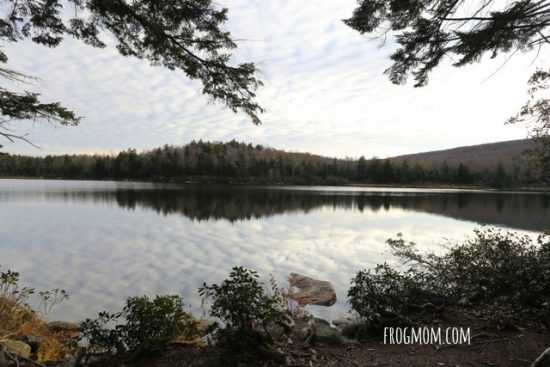