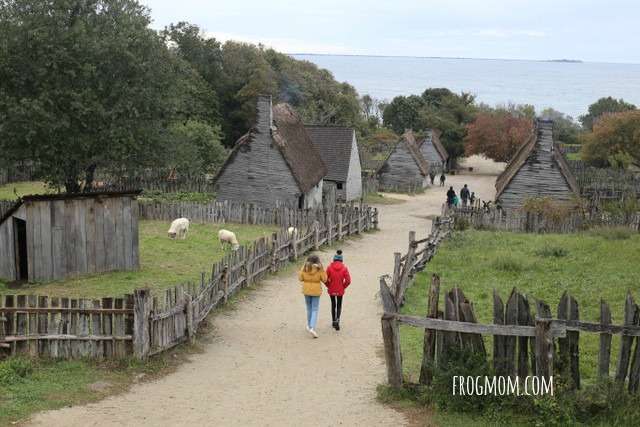 First day in New England after arriving late on the previous night from London, UK. Based in Plymouth in a lovely vacation home, we started exploring New England along the coast. Our day involved a living history museum with Wampanoag and Pilgrim villages, quaint lighthouses and a swim in the sea with a friend from the Serpentine Swimming Club. 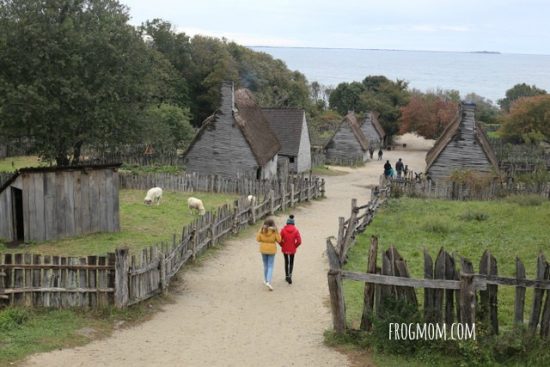 You could say that the Plimoth Plantation is where Thanksgiving began. The year: 1621, based on 2018 historical research. The number 1 family attraction in Plymouth, this living history museum recreates a 17th century experience with actors in period costumes enacting pilgrims in 17th century houses and with Wampanoag people in wetos (Wampanoag traditional bark houses) sharing their traditional culture.

When we visited, the weather was wet and cold which was a bit miserable but in hindsight, this probably gave us a better understanding of 1620s life. It couldn’t have been warm and sunny every day, particularly with the long winters they had. After a 14-minute introduction film, we walked to the Wampanoag Homesite and spotted smoke coming out of the roof of a long barkhouse. The Wampanoag Homesite was empty otherwise so we ducked under animal skin “curtains” and entered the weto. Inside, a woman in modern clothing was making a sort of net by knotting string, while a man in wampanoag attire tended to the fire and a woman wrapped in animal fur blankets looked on. 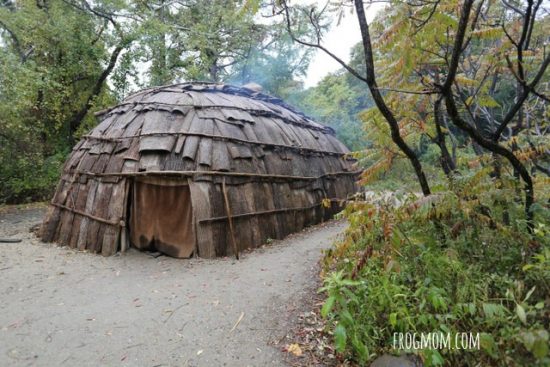 Both the Wampanoag man and woman were mostly silent during our visit so we conversed with the woman in modern clothing who told us about trees used in the construction of wetos, how they were still lived in in the 1970s when they were declared illegal by the US government, and how many placenames in Massachusetts derive from native languages. Eyeing a pot over the fire, we asked the woman in furs what she was cooking and her answer was a soup in a cast iron pot that came from the British. 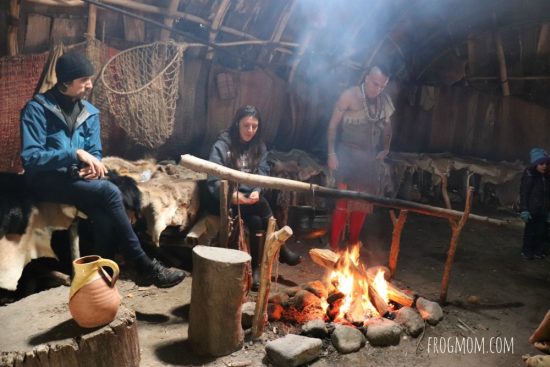 Trying to engage with the man, I noticed that he was wearing woollen leggings and asked him about it. “They are from the British,” he said. The woman in modern clothing misunderstood my question, thought I was asking about the color blue in fabric and went on to explain that it was an extremely rare color in natural plants and as such, blue wool would have been a prized item.

We went out and walked up a short trail to the crafts center where a female potter had fascinating stuff to say about eating ware in the 17th century. Based on Dutch paintings and archeology, she explained the societal hierarchy in eating vessels from silver for the rich, to pewter for the less wealthy and ceramic for the poor. Who would have thought? 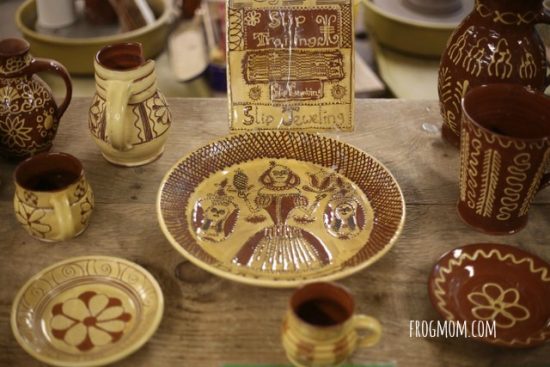 Our next and final stop was the 17th century English Village where we spent much longer than we expected. It was great! Where do I start? The actors in houses were not just playing the part of a pilgrim. They were speaking in 17th century English too, because mayhaps the ships arriving betwitxt 1620 and 1630 were so rare. In a house, two women were cooking marshberries (cranberries) over an open fire in a cast iron pot with a wooden lid, telling us about their life in Shoreditch and how they had signed up for the New World for promises of land. 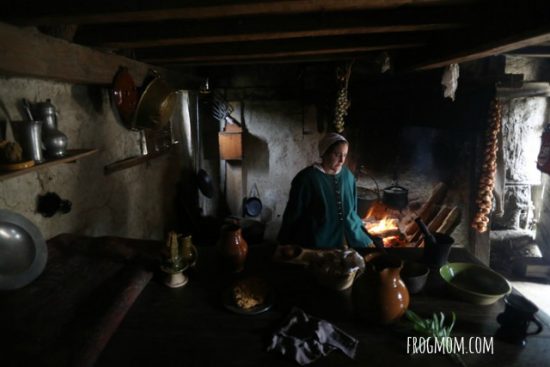 In another house, a man was carving a wooden paddle to insert a wetstone in it and still further, two other women were stuffing pigs’ intestines with ground pork and spices to make sausages. Pure awesomeness for history buffs! The great thing about the English Village was that the actors were interacting with us, treating us as if we were 17th century visitors and without the slightest awkwardness. 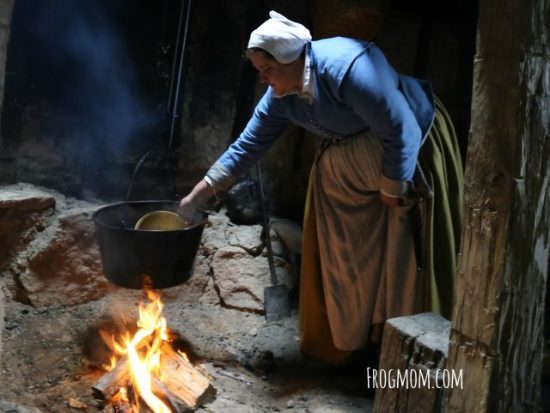 I should mention that my teenage girls were not in the mood and refused to talk to actors (they found the interactions awkward), which prevented them from enjoying the full experience. That’s a shame but us adults really loved it.

Too lightly dressed for cold weather, we decided to go on a road trip down the peninsula to the Cape Cod National Seashore. As for all NPS sites, the visitor center was a great place to start and check out what we were going to do. Grabbing a leaflet for the park, we noticed a few lighthouses not far from us. I’m a lighthouse lover and this was a big selling point. 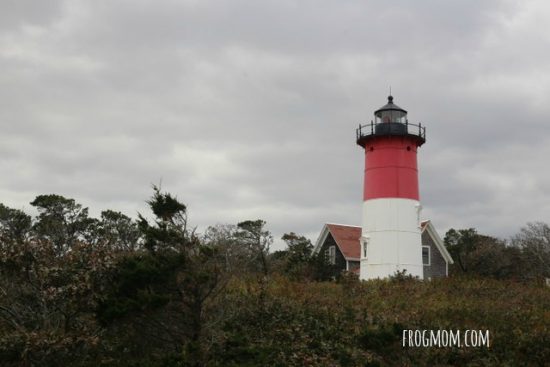 Our first stop was Nauset Light, a red and white lighthouse that was recently moved 100 m inland on a flatbed truck. It’s cared for by the Nauset Light Preservation Society, a nonprofit with passionate supporters. As soon as we arrived, an old lady sent us up a beautiful red spiral staircase to the upper level of the lighthouse. There, a docent gave us a short and informational tour of the lighthouse, how its light shines out 60 to 80 miles at sea, how the old Fresnel lens was replaced by two rotating area beacons and how coastal erosion had forced the lighthouse to be moved inland. Such an icon on this beautiful stretch of coast! 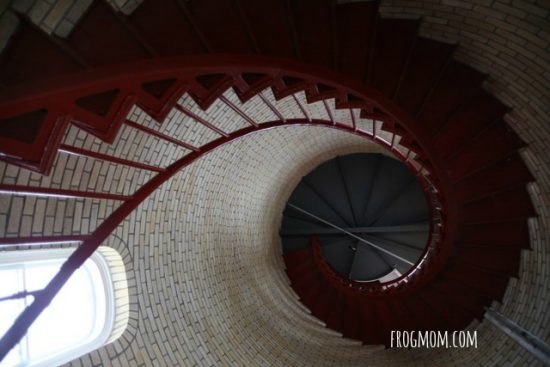 This was great but going down the stairs didn’t sit well with me as I’m afraid of heights. Good thing it’s a short lighthouse. 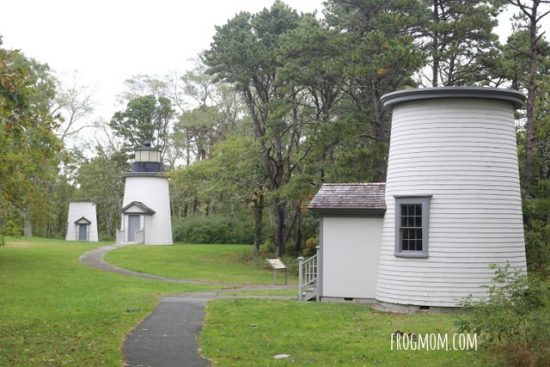 From Nauset Light, a paved train took us to another site a few hundred meters away where we saw the famous Three Sisters. Have you ever seen three lighthouses in a row? I never have and it’s a wonderful sight. They are decommissioned lighthouses that were auctioned off and moved to a site where they look like classic New England cottages – one was actually used a cottage at some point. The NPS purchased them all and moved them to a meadow in the forest where they are aligned in the original orientation they had in their former coastal glory. Pretty cool.

The morning wet weather had cleared off and at 4pm, the sun was playing hooky with dark clouds so we met a friend at Falmouth for a swim in the sea. This friend, Don, used to swim with us at the Serpentine Swimming Club in London, a club described by Lisa, Don’s friend, as “London cold water swim club.” He now lives in Falmouth and is a gifted artist, turning seaglass into jewels or decorative pieces. An hour before sunset, we changed into our swim gear and headed off to the beach.

Thanks to its beaches and gorgeous Nantucket style homes, Falmouth is a vacation destination for Bostoners and it’s easy to love this community. It reminded me of the peace and tranquillity of Carmel in California. While the air temperature was nippy (8C/45F), the sea was nice and warm-ish (15C/60F). 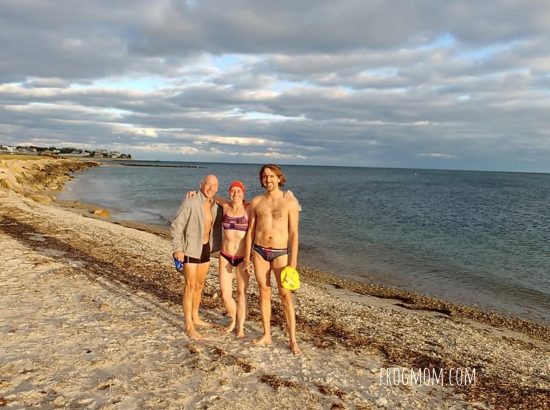 However, the real treasure was underwater. Oh, the marine wildlife when we swam in the sea! I wish I could have photographed the various species of fish, the gorgeous red seaweed undulating with the current, the seashells dotting the fine sand seabed. On the break wall, I came face to face with a group of cormorants that were gazing into the sunset, waiting for dinner to swim by. It was truly magical and I simply don’t understand why there are so few open water swimmers in this area. Don mostly swims alone in the sea, which isn’t great for safety and also isn’t great for soul company.

After this brisk swim, we warmed up and had dinner at an Italian restaurant on Main Street in Falmouth where a singer sang classics from Cat Stevens, the Beatles and the Eagles.

This concluded a wonderful introduction to Cape Cod. Jetlag helping, we were in bed by 9pm. 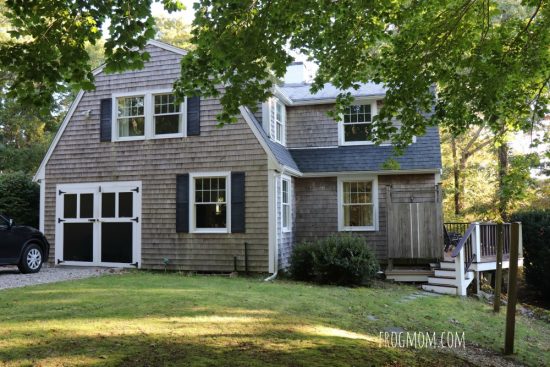 We stayed at a private house rented through AirBnB near Cape Cod Bay in Plymouth, featuring 4 bedrooms and 2 bathrooms, and nestled in the trees at the end of a quiet dirt road. Very helpful owner, roomy house and clean throughout. Note: no TV but we couldn’t have cared less. The wifi was great. Overall, a really nice base to explore the area.

Contact me at info [at] frogmom [dot] com for full house details.