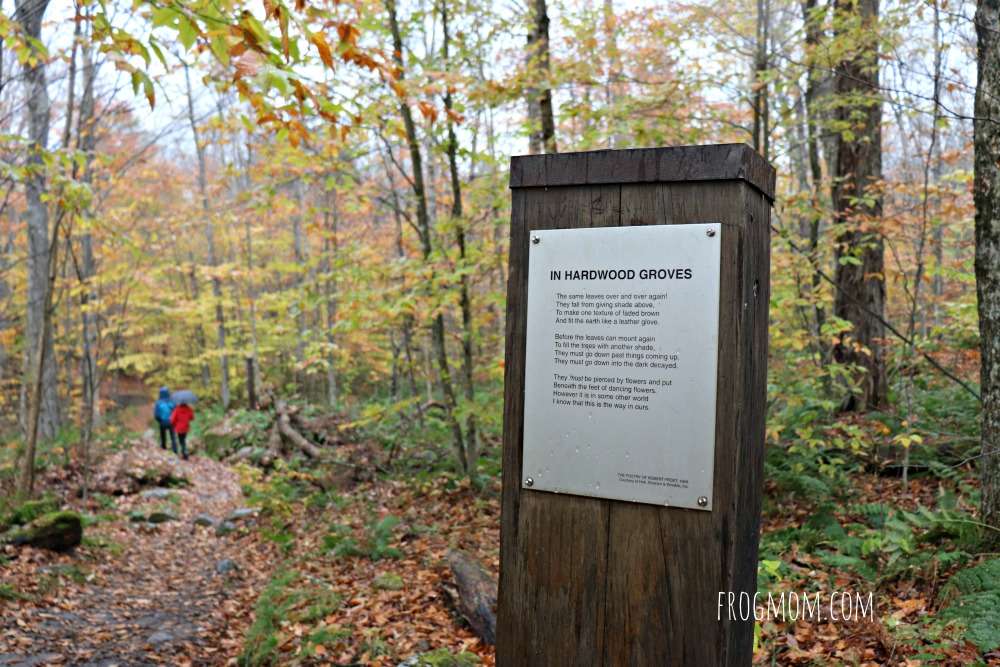 It’s time this New England trip started to cater to teenagers. On day 3 of our travels chasing fall foliage, we drive up a mountain to find nature landscapes that inspired the American poet Robert Frost, and continue north to the main attraction in Waterbury, VT – the Ben & Jerry’s Ice Cream Factory and its graveyard of forgotten ice cream flavors. 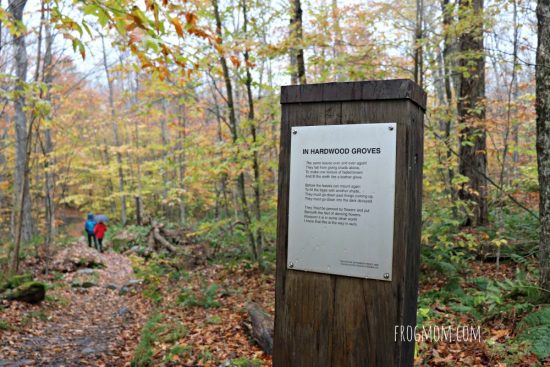 If the name Robert Frost doesn’t quite immediately ring a bell, these lines will.
Two roads diverged in a wood, and I—
I took the one less traveled by,
And that has made all the difference.

One of the most celebrated poets of America, Robert Frost (1874 – 1963) spent a lot of his life in New England between New Hampshire and Vermont. He wrote about rural New England and nature with vivid descriptions and sharp philosophical observations. Fittingly, Vermont celebrates Robert Frost with an interpretive trail along which seven of his poems have been engraved on signs in the Green Mountain National Forest. As my oldest had studied Robert Frost at school two years ago, this interpretive trail seemed like a great way to explore the works of Robert Frost out in nature where they all started. 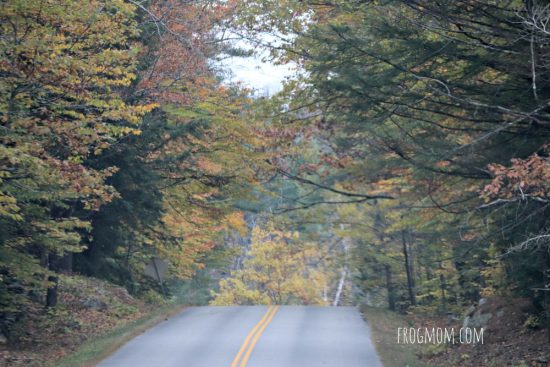 We parked along Highway 125 in the small parking lot and studied the weather. Since the morning, the weather had gone from damp to wet and it was getting wetter. “I have an umbrella,” said my oldest who then lent it to me and opted to stay in the car (too wet, she said). My youngest and my husband, unfazed but only one umbrella between them two, joined the hike. I promised it would be short and flat. 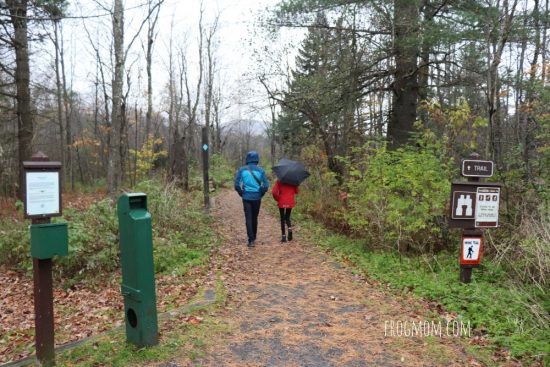 At the trailhead, a sign said, “The poems you’ll see along the trail describe the feelings of the poet, indeed, feelings you might experience in walking through this natural environment.” At the first poem, we started reading out the lines loud. Reading a poem out loud and in your head is not exactly the same experience. It’s like you hear the words better and indeed, they sounded wonderful in that October drizzle. 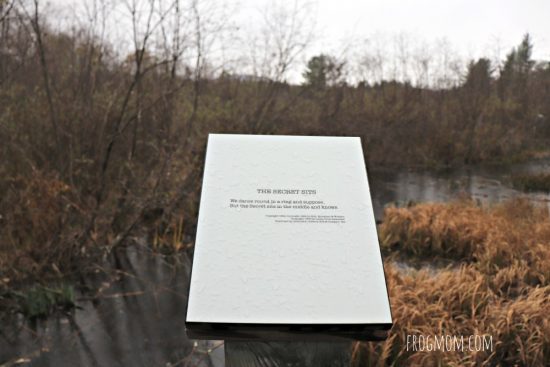 Before long, the drizzle turned to a downpour and though we still read the words out loud, we didn’t linger. On a finer day, we might have. Some poems about the fall season found special resonance to our ears, celebrating the gorgeous foliage and landscapes of New England’s autumn. 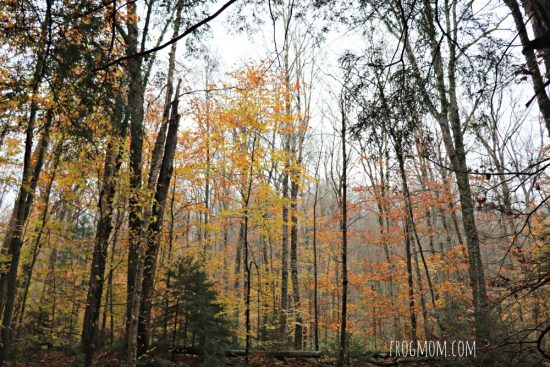 After a bridge, the trail entered a deciduous forest whose birches with yellow leaves looked golden in the rain. We were lucky that most trees still had leaves as New England has been battered with heavy winds in the past week and most fall foliage is now on the forest floor. 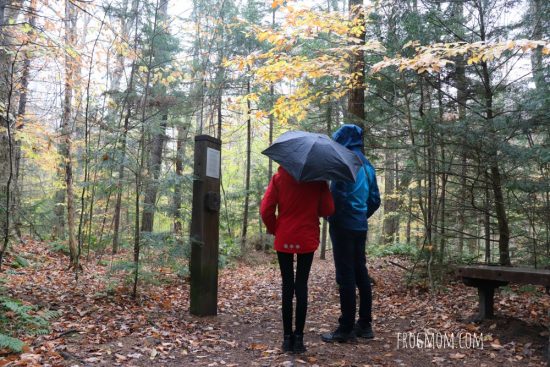 In about half an hour, we were back at the trailhead, happy to have read these nature poems in context and happy to be somewhere warm and dry in the car. 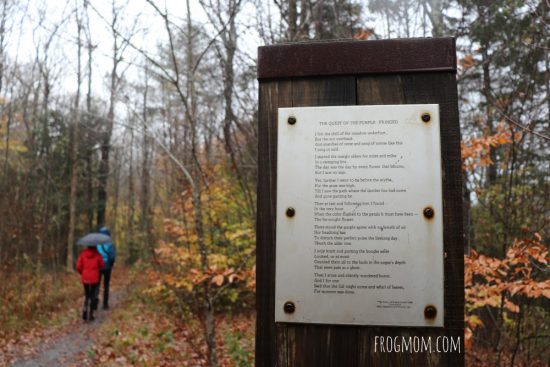 If you’re a fan of the iconic American ice cream company, a factory tour in Vermont is a must on your list. Both my girls are Ben & Jerry’s fans, Chocolate Cookie Dough converts who can gobble up ice cream by the pot and both were very excited when they learned of our visit. I appreciate good ice cream and this factory tour totally saved our afternoon while rain kept pouring down. 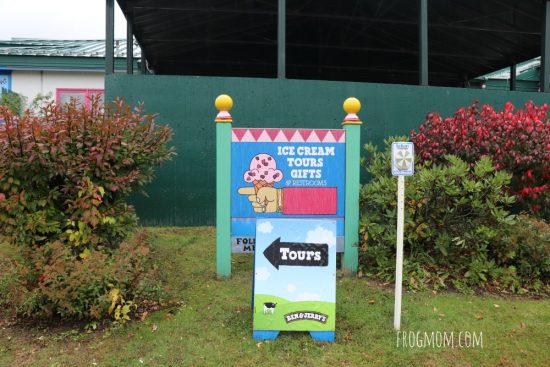 Interestingly, the Ben & Jerry’s Factory is barely signed in Waterbury, VT, yet once you turn into the driveway you enter this huge parking lot stretching over three levels. Seeing as the weather wasn’t cooperating, we quickly passed the ice cream innovation van (closed) and headed for the visitor center. Past the double doors, warm heated air wrapped us in cozy cushyness. As it was cold outside, hot soup would have been perfect but guess what. At Ben & Jerry’s they only serve the cold stuff. Ice cream! 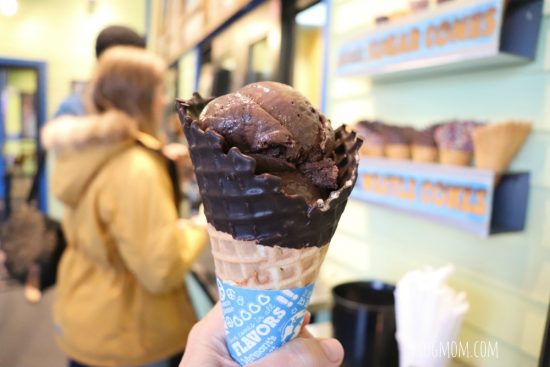 My oldest had Triple Caramel Chunk and Cookie Dough, my youngest had Cookie Dough and my husband and I had Chocolate Therapy. In theory, we ordered small servings but at Ben & Jerry’s, small is enormous. It was too much, meal-size really, and sadly, I couldn’t finish my ice cream. 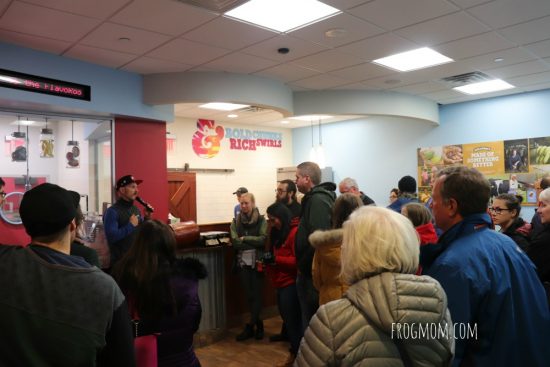 To give you an idea of the scale of operations, factory tours run every 20 minutes from 10am to 6pm and ours had about 30 people in it. That’s on a rainy Tuesday mid October, outside of US school vacations. Summer must be crazy! Wow, I was floored that it was so busy. 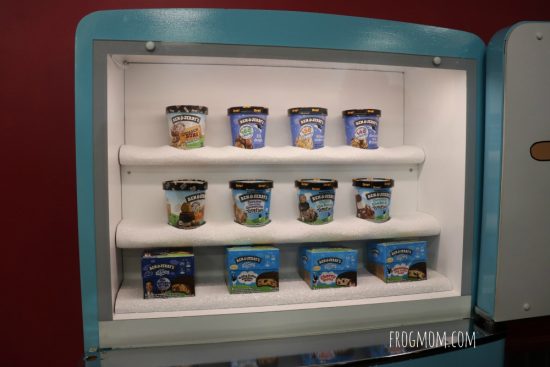 The tour started with a 7-minute animated moo-vie about the wonderful Ben & Jerry’s corporate adventure. From humble beginnings in a gas station to the biggest ice cream maker in North America in less than 30 years, that’s quite a feat. Ben & Jerry’s is a B Corp so the moo-vie mentioned their social & environmental achievements, from sourcing ingredients on a fair trade basis to rejecting GMO-modified foods or fighting for social justice and the poor. It was slightly preachy but at the same time, you got to admit that they have great values and seem to walk the talk. Check out this sign. 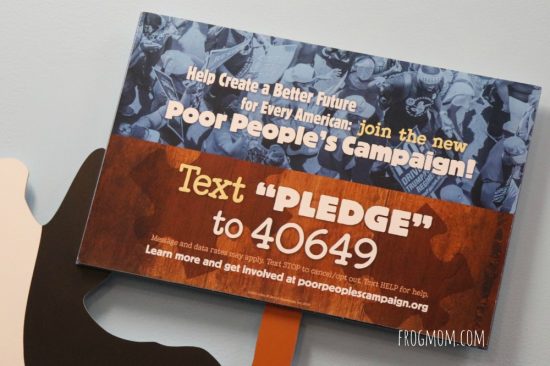 We were not allowed to take pictures during the tour of the factory rooms but it’s just like we imagined. Vast industrial rooms with people in lab suits navigating between stainless steel iron vats and mixing tanks. There was nothing remotely Willy Wonka about it, it’s a factory and ice cream is processed inside tubes and machines. Meaning, the only ice cream we saw was in the sampling room at the exit. There, most everybody tasted a small batch of s’mores ice cream while listening to cow jokes cracked by the guide (also, did you know that the best selling ice cream of Ben & Jerry’s is Half Baked? Now, you do). 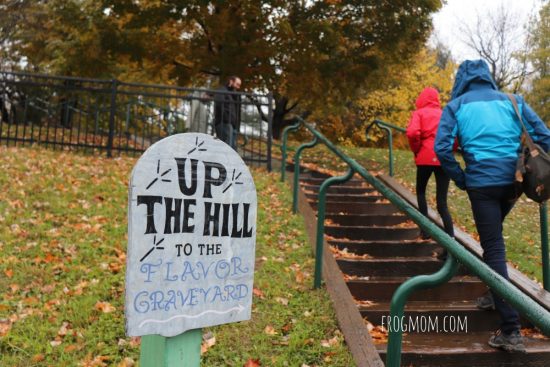 The best part of our visit happened after the visit and it was free. I would recommend to anybody passing by to stop there even if you’re not doing the tour. It’s the flavor graveyard! 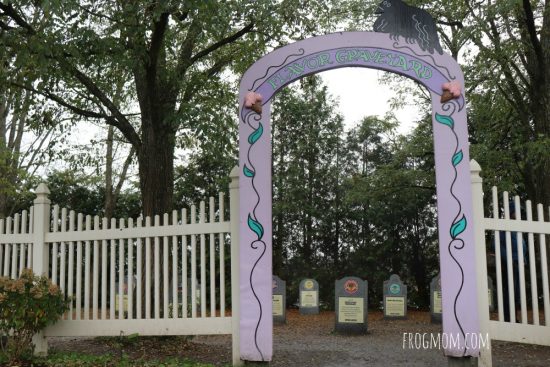 While most company prefer to forget about their failures, Ben & Jerry’s has decided to celebrate them in self-deprecating manner. This lead to hilarious tombstones. 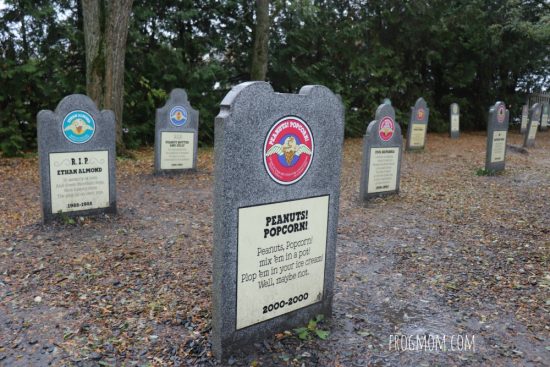 Peanuts, Popcorn!
mix’em in a pot!
Plop’em in your ice cream!
Well, maybe not.

This was a genius idea and our 13-year old spent a lot of time reading every obituary as well as the ice creams’ ingredients, mentioned on every tombstones with the dates of creation and rejection.
This concluded our day.

Finding an affordable place to stay for a family of 4 in Vermont during fall foliage season had proved a real challenge and I had exhausted all the usual vacation rental websites, Airbnb, VRBO, tripadvisor and more. On HomeAway.com, we found a cute little country house outside Williamstown, VT. 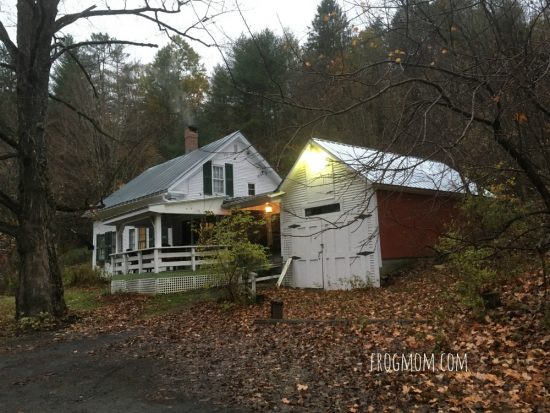 It’s a bit worn inside and could use some TLC, my girls don’t like the damp stains and peeling painton the ceiling of their bedrooms but it’s very homey and the owner is very nice. She even brought us a bottle of her own maple syrup production. How nice is that? Best part is, the kitchen is very well equipped. If I understand correctly, this used to be the home of the owner’s son, a trained chef who now runs a smokehouse in town. Explains the well-kitted out kitchen.

Lunch was a quick affair. After the Robert Frost Interpretive Trail, we stopped at a country store in Hackton. “They have pizza!” my two girls yelled, happy to have pizza. “It’s a 45-minute wait for pizza,” the cashier said inside. Since we were in a hurry to get to Ben & Jerry’s, I had soup and my husband had salad but my girls refused to eat lunch. Teenagers… 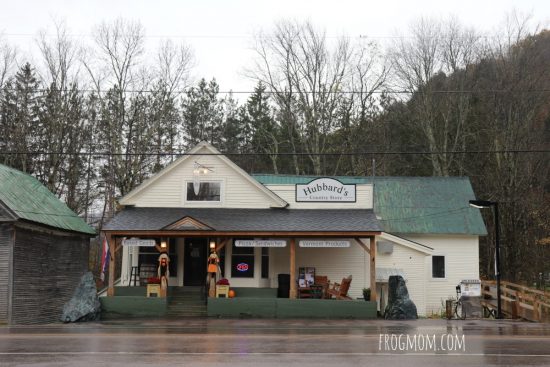 For dinner, we shopped at Hannaford, a New England chain of supermarkets that my husband has worked with in his former company. They merged with Ahold Delhaize in 2016, a group based in the Netherlands. 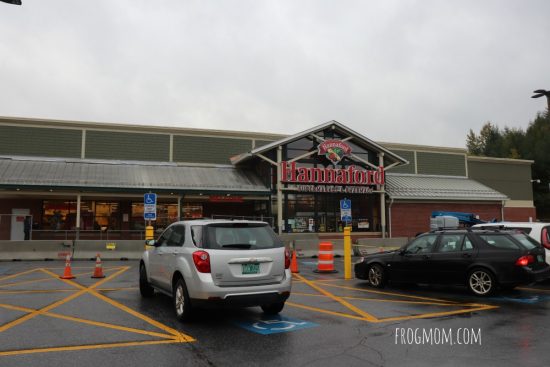 The produce section was huge and while I marvelled at the selection of squashes and apples, my girls headed straight to the snacks aisle for GoldFish and pretzels. Priorities, eh? Of course, as befits a Vermont supermarket, the maple syrup selection was fantastic and I may been carried away.

I was surprised at checkout to see that they still give away free plastic bags for shoppers. Also, they don’t sell anything in bulk apart from fresh produce. Room for improvement in the environmental department but otherwise, a good supermarket.