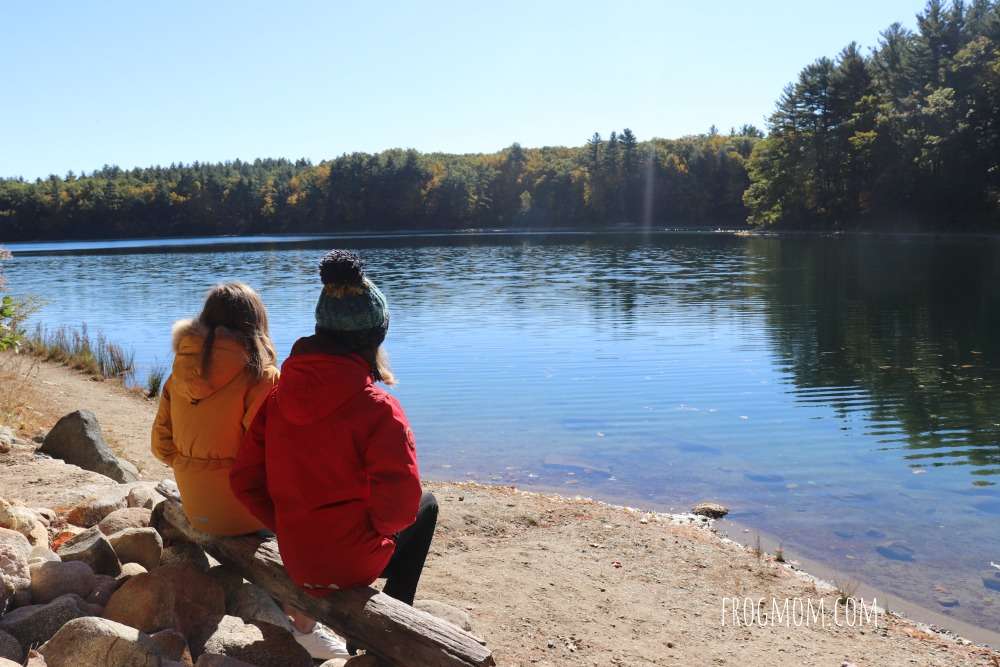 After exploring Plymouth and Cape Code, we continue our New England trip and drive to Vermont, breaking at Walden Pond, the historical park where philosopher and nature writer Henry David Thoreau lived in the woods during two years. While the trees haven’t turned yet, the pond is a real gem and the visitor center wins my teenage girls’ hearts with interactive exhibits. The later part of the day is spent in Grafton, VT, a village that stands still frozen in time – in a good picturesque Beetlejuice way. 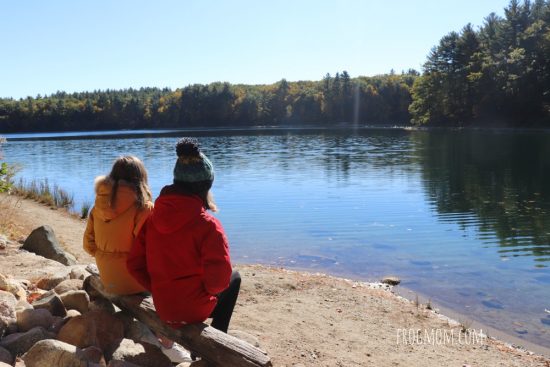 “I went to the woods because I wished to live deliberately, to front only the essential facts of life, and see if I could not learn what it had to teach, and not, when I came to die, discover that I had not lived.”

These words, from Henry David Thoreau’s book Walden, have come to resonate with nature lovers worldwide and to embody the great American nature experiment – being at one with nature, inspired by nature, observing nature. Thoreau’s nature adventure started on July 4th, 1845 on a piece of land in Massachussets with a quiet lake called Walden Pond in the middle. This is today the Walden Pond State Reservation, a must-see in Massachussets.

My oldest daughter studied Thoreau at school two years ago and we  thought that she would like to see the place that inspired one of her school books. A bit like Stonehenge, Walden Pond suffers from a “road in the middle” situation with the parking lot, visitor center and cabin on one side of the road, and the actual pond and trails across Route 126.

We started with Thoreau’s replica cabin in the woods. “It’s a tiny house,” I told my youngest daughter who adores tiny houses on Instagram.”It’s not a tiny house,” she replied. “It’s got big windows which makes it hard to heat and there’s no kitchen.” 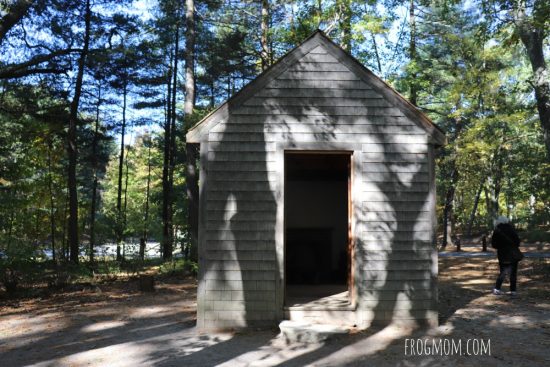 I reflected on that. The cabin is tiny, just 10×16 feet, and it is also very spartan. Imagine the bare essentials – bed, table, chair, wood stove, bedside table. What did he eat while at Walden Pond, I wonder. NPR tells us that he was an early vegetarian and a frugal eater. He was also a skilled gardener and grew beans and grains at Walden Pond, bartering whenever possible while eliminating a lot of imported foods (tea, sugar, coffee) from his diet. In today’s world, the man would be a homesteading guru.

To nourish our mind, we headed over to the visitor center where interactive exhibits grabbed my daughters’ attention – calculating the depth of Walden Pond with knot ropes or adding your own Walden Pond on a world map illustrated Thoreau’s life at Walden Pond in creative ways. 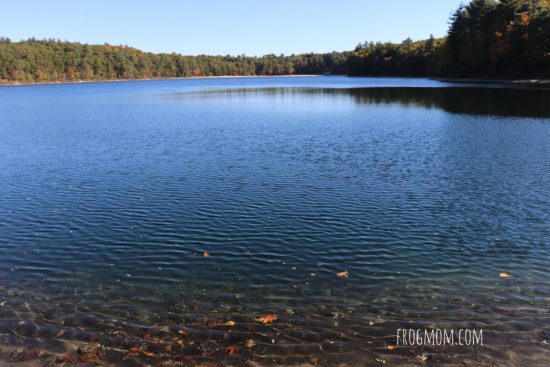 We were now ready to discover the pond and like the chicken, crossed the road. A few steps down a hill took us to the edge of the pond. It was a lake, really. “We should have taken our swimming gear,” said my husband. He was right. The water was crystal clear and gorgeous. With our girls, we walked around the lake, which took us about half an hour at a slow pace as we were taking in the fall foliage in trees around the lake. Apparently, Thoreau carved 180 holes on the lake when it was frozen in winter and with a knot rope, measured the different depths of the lake. If you wondered what you do when you live in the woods during two years, that’s a thought.

Along the way, we spotted two animals along the way. The first one was a western sandpiper, a small bird that was identified by the ranger at the visitor center after much deliberation because it was so unusual even during migration season. In fact, the first member of staff couldn’t ID it and called the ranger in to have an expert opinion. I had been trialing my brand new 55-250mm lens and was quite proud of the resulting pictures. 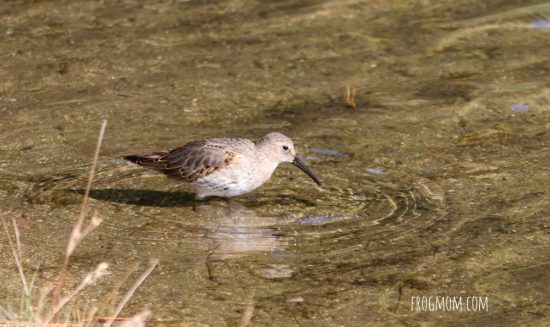 The second animal was a red squirrel and it got us very excited. Why are red squirrels so special? Well, it was fighting with a teeshirt ferociously and was quite funny, but most importantly, red squirrels are disappearing from the UK, killed off by a disease carried by invasive grey squirrels. We rarely ever see them and this was really a cool sighting for us. 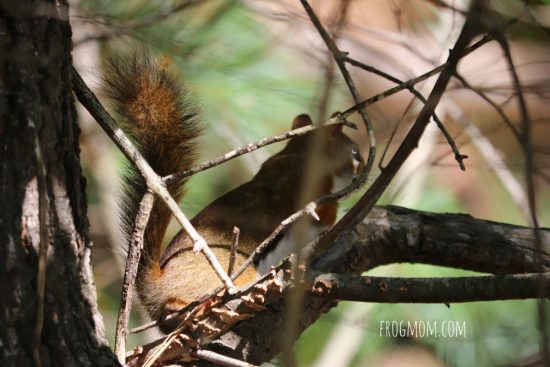 This concluded our visit of Walden Pond as we were expected in Vermont and hit the road.

“Grafton, the prettiest village in Vermont.”

I think it’s the slogan of the tourism office and it’s oh-so right. Grafton is a village where time almost stands still and you’d think it just happened by chance but it was a rare deliberate plan to revitalize a rural community. Let me explain this extraordinary story. 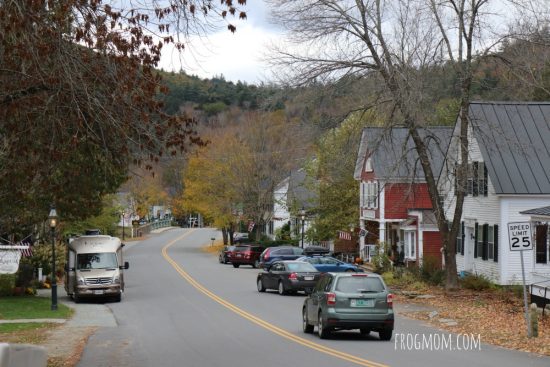 Grafton, current population 648, is a city that lost many residents during the battle of Gettysburg and whose main industry was a soapstone quarry that closed in the late 19th century. It could have gone the way of the dodo, like many rural communities, had a New York financier, former student of architecture, not fallen in love with the city. In 1963, he created the Windham Foundation to preserve Vermont’s rural way of life.

Rather than turn the city into a museum, he set up the foundation to operate two traditional Vermont enterprises: The Grafton Inn, which has been in near continuous operation since 1801, and the Grafton Village Cheese Company, re-opened to help keep local dairy farms in operation. It’s basically a small-scale National Trust and it works.

However, the most amazing and unnoticeable urban planning decision the foundation took was to bury electricity cables on Main Street. You don’t quite realize it until you look up and don’t see these ugly power cables overlapping in the sky. That’s the best decision they ever took and it totally adds to the timeless feel of Grafton.

What better way to discover a place than to step out of the car and walk around? Cleverly, the Grafton Inn displays free brochures with an illustrated walking tour of the city so we put on our coats and walked outside on this crisp autumn afternoon. 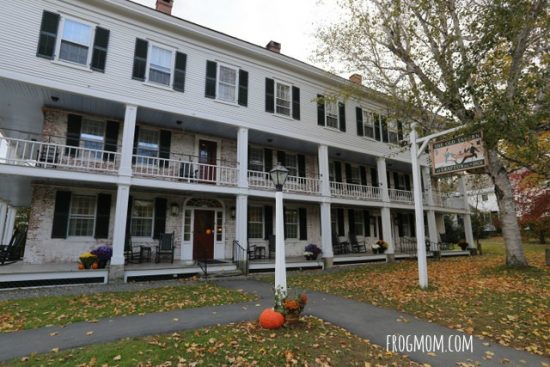 The tour started with the Village Store, a classic country store with a great selection of foods, a cafe and local gifts. My girls loved the sweets display, with bulk candy stored in old-fashioned glass jars and peppermint candycanes in tin buckets. 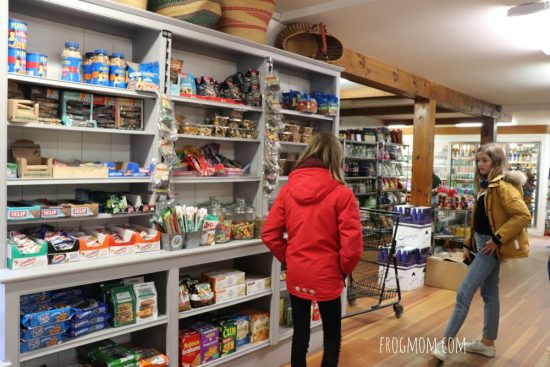 We continued down Main Street to the old Fire Station (now an Adirondack chair store), the first Post Office, and the lovely public library with a wraparound porch. It was a private house bequeathed to the town by an old lady who also donated money to fund the library.

Now, this is a public library according to my heart. It’s welcoming, there are comfy chairs spread in coves and they display kids’ projects on bookshelves. 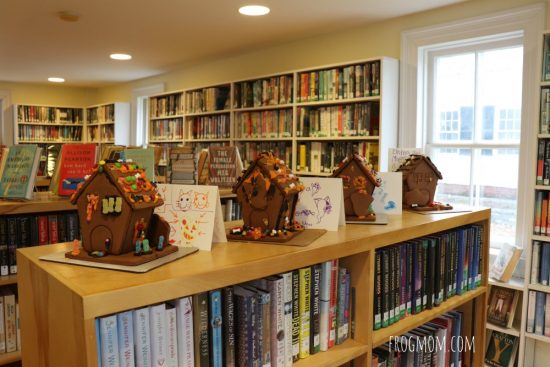 Check this out, Halloween gingerbread houses. How’s that for a nice community touch? I mean, if all communities of 648 souls had public libraries like this one, the world would be a happier place full of good books and community projects.

We turned onto Water Street, past a few nice clapboard houses with rocking chairs on the front porch, to a covered bridge. My brother, a fan of Bridges of Madison County, would have been in heaven. Turns out that the Kidder Hill Covered Bridge is the only one of 13 covered bridges between Grafton and Bellows Falls to have survived since 1869. We crossed the river to have a better view of the bridge and crossed it again. 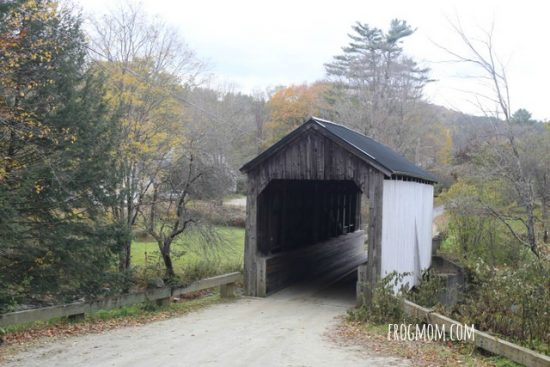 Along School Street, we found the school. Yes, no surprises here but I ask you – how many communities of 648 souls have primary schools? Let’s not forget that we are in deep rural Vermont and that the population is more likely to play bridge than to kick balls outside. As we were admiring the adjoining Grafton Forge (there’s a resident blacksmith in Grafton), a school bus turned round the corner, back from its afternoon drop-off round. 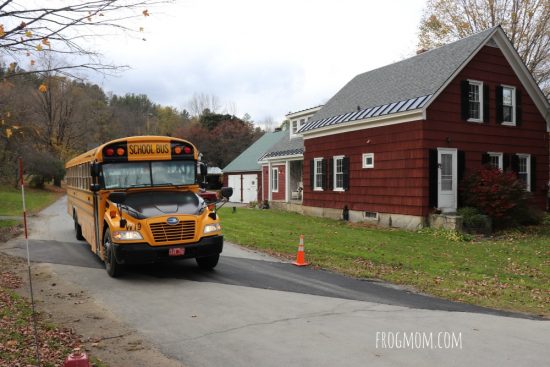 A couple more blocks took us back to the Grafton Inn and the adjoining Old Tavern, a quaint barn with a miniature replica of the inn on its outside wall as a stylish bird house.

Woken up by jetlag, I waited until dawn to wake up my husband. There was a swimming pond across the street! At first, the receptionist thought we were joking when we enquired about local lakes but then, she recommended the one across the street because “its clean and stream-fed.” Stream-fed, she said twice, to make sure we understood. We did.

Here it is, at the crack of dawn. 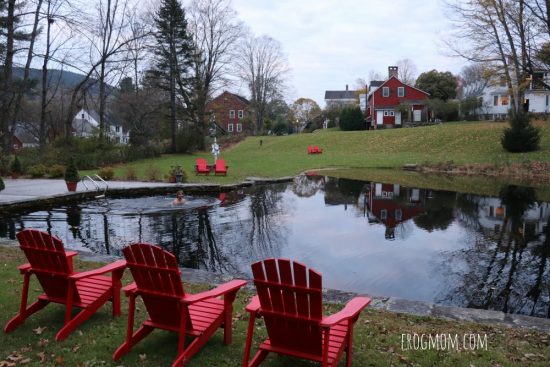 Adirondack red chairs around the pool, a ladder to go down three steps into the blackest of waters and the river running a few feet way beyond the trees. It was bloody cold and a wonderful way to start a brand new day.

When in Grafton, stay at the Grafton Inn. That’s what we did. It’s a real slice of Americana, having hosted esteemed guests such as Ulysses S. Grant, Rudyard Kipling, Theodore Roosevelt, Henry David Thoreau or Nathaniel Hawthorne. We counted three presidents, several writers and more on the hand-painted sign above the check-in counter. 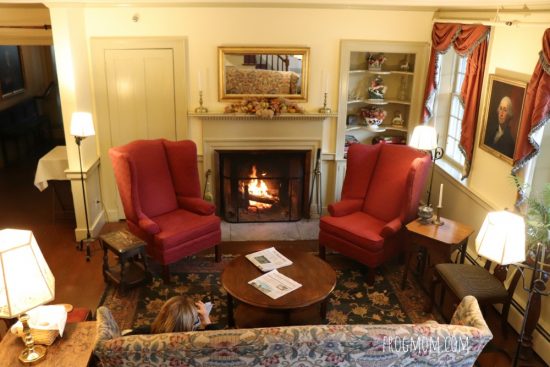 The lobby’s fireplace always has a tended fire, a fact I can attest to as I was up at 4.40am with jetlag and walked downstairs to write this post. The crackling woodfire and hot water flask with teabags were most welcome sights. The reception clerk was a lovely woman who was a nurse and now works nights here. She has a 9-year-old daughter and gave me great tips for our next destinations.

At 6.35am, I had a surprise visit from the cook who, carrying a tray, said “Hot strawberry and cream cupcakes fresh out of the oven?” You bet. They were delicious and hot. I only had one because breakfast was around the corner but hey, I could have had more. Note that the Grafton Inn really knows how to treat their guests, as they also serve Grafton cheddar, crackers and hot chocolate chip cookies with tea and coffee at teatime. That’s a real nice perk about staying here – as many teacups as I want!

Lunch was a complete failure as we were traveling on small country roads in New Hampshire and every single restaurant or food shack we passed was closed. Monday lunchtime in rural New Hampshire, eh? Not the busiest time of year. We ended grabbing hot bagels and chips at a gas station, topped off with apple cider donuts from a farm shop that had been open for business. Those were actually good but so filling that none of us were hungry anymore after that. 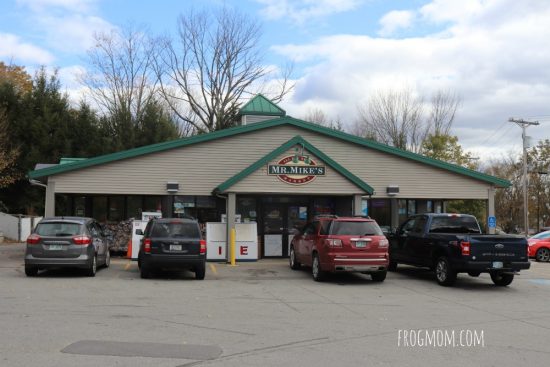 Dinner was a definite upgrade. Adjacent to the Grafton Inn, the Phelps Barn Pub serves regular American pug grub and the apple butternut squash soup was one of the best I’ve ever had. I can’t say the same of the pumpkin gnocchis that were tough as nails but the butternut soup, yum. I’m guessing the recipe could be close to this. 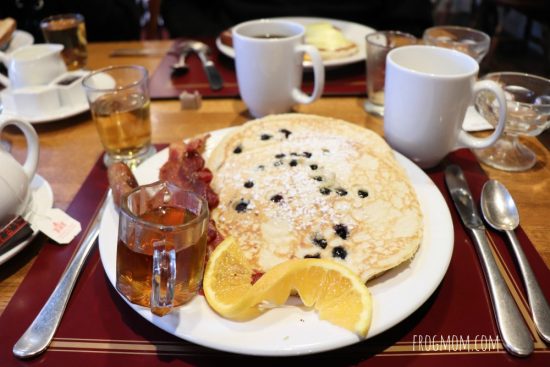 A special mention goes to the blueberry pancakes with maple syrup for breakfast at the Grafton Inn. Legendary.