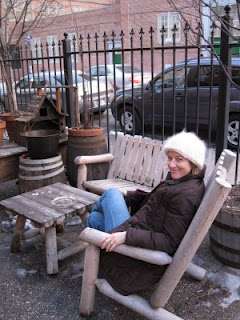 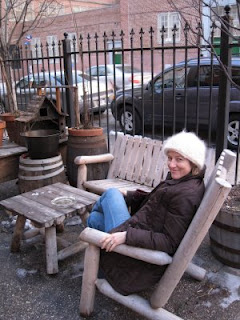 “When you go to New York, make sure you wear black.” These were the wise words of my good friend Heather before my trip. At a venerable age, I was finally to discover New York for the 10th Winter Conference of the Society of Children’s Books Writers and Illustrators (SCBWI).

Heather’s advice did not help me much as my wardrobe only hosts a lonely black tank top. Not enough to go about on the big apple’s streets by freezing temps. However it made me very aware of the noncolor black on the streets and it was pretty predominant. But enough of black chit-chat. Let’s get down to business. What’s a first-timer to do in New York?

When I arrived, I met my friend Cherie in the Carroll Gardens neighborhood next to Brooklyn Heights. Cherie is a kids’ art designer and lives there with her husband and little girl.

It was 5pm and we had two hours to spend before Cherie had to leave for another commitment. She took me to a local wine bar called Black Mountain Wine House at the corner of Union and Hoyt.

Dragging my noisy roll-on luggage behind me, I followed her inside in my bright red coat – I mentioned I had no black, it’s scientifically proven. What a find.

If a friend of hers hadn’t given her the address, we would never have found it. The outside is so …. sober? It’s like they’re hiding or something. Think wooden outdoors furniture, a wood-chopping block (cuz there’s a cozy fireplace inside), closed curtains and a vague sign by the iron gates.

We sat down by the coveted fireplace and ordered a glass of red wine. The crunchy sound of baguettes being sliced in my 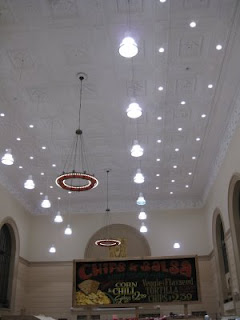 back made me hungry but I had to hold my jet lag and appetite for a few more hours. A glass of Malbec from Argentine helped distract (read submerge) my stomach.

After a pleasant conversation, we walked back to Cherie’s place and I mentioned a bakery shop I’d seen from the cab and that looked just fab: Sweet Melissa. Isn’t Sweet Melissa just a great name for a sweets spot? An obvious wink to the Allman Brothers song. I love it. Wish I’d been able to swing by.

Instead, we stopped at the local Trader Joe’s, the hipster Hawaiian-themed foodie market, at 130 Court Street. I couldn’t help photographing the ceiling.

It was so white, adorned and clinically lit. It was also exceedingly high for a grocery store. It’s precisely 48-foot high. No wonder, the building used to a bank. It was the Independence Bank building, a Renaissance Revival style bank building designed by McKenzie, Voorhees and Gmelin and built in 1922, with an addition, designed by Charles A.Holmes and built in 1936. 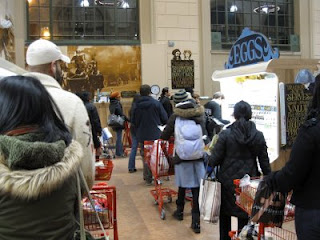 Historical District rehabilitation process. Judging by the lines on a Friday night, recession has not hit Trader Joe’s yet. Or it’s really difficult to get moderately priced veggies in this part of the world. Pick the one that doesn’t belong.

If I come back to New York, I’ll make sure to revisit this neighborhood. It was lovely and reminded me of some bohemian parts of Paris’ 11th arrondissement. “Smith Street is like San Francisco’s Valencia Street,” said Cherie. Restaurant upon bar upon restaurant and food smells to make your (my) stomach growl with anticipation.

After Trader Joe’s, I finally got on the subway to put down the suitcase. I was getting tired of hearing it following me on the sidewalk. As my conference only started on Saturday morning, I decided to go out for dinner. I stayed in Manhattan at a friend of my mother’s and confidently took the subway towards Greenwhich Village. Easy, no line change. Station Bleecker Street.

At 42 Bond Street, at another hidden location behind closed thick red velvet curtain, I found Il Buco, a restaurant highly recommended by Time Out New York and a friend of mine. 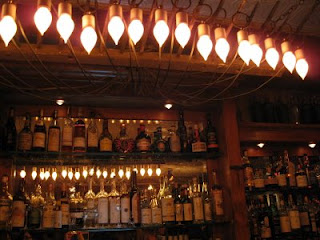 Good thing I was out solo. The place was jam packed. I’d be hard pressed to give you the name of a restaurant in San Francisco where crowds do the sardine-can squeeze 14 years after the restaurant’s opening.

Also, I got a neighbor by mid-main course. As luck would have it, it was the owner, Donna Lennard. She is an interesting woman who seems to know San Francisco’s restaurant scene like the back of her hand. When I asked why, she replied: “All the chefs are friends of my chefs!” Point taken. Chef is a tiny world. Say, two degrees of separation? Ms. Lennard is also a film maker and arts lover which is always nice.

She was kind enough to get me a sliver of the restaurant’s scrumptious chocolate almond torte – in addition to my already ordered yummy plate of ricotta fritters with pomegranate syrup. When you offer chocolate to a deprived chocoholic, you always score very high! Thanks Ms. Lennard.

Dessert signed the end of the day for me as I needed to get up early to be at the conference on the following day. Again, I hopped on the subway but got it wrong. Hey, even kung-fu masters need to hone their skills through trial and error. I was actually headed towards Brooklyn Bridge and turned back after four stations (that’s how long it took me to figure things out) to find my way home.

Sheesh, getting lost on the subway on the first day. What a young nut!