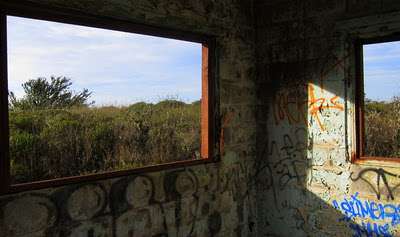 Talk about an adventure. With a mom friend, her two kids and my girls, we set out to find a historical marker on Sweeney Ridge in Pacifica, which I thought was pretty cool. In my mind, historical marker + Spanish expedition, armed soldiers and missionaries with horses and mules + year 1769 set the stage for a nice storytime after a steep hike. But lo and behold we found a Nike Missile site on the way and that became the hit adventure for all of us. A vandalized and dilapidated remnant of Cold War days stole the show on a sunny winter day and had our kids going all crazy in and out of the buildings. Would you believe me when I say that the hills around San Francisco never cease to surprise me?

On a gorgeous afternoon, we looked for the trailhead around CA-1 in Pacifica. For the record, there’s no big signage on the freeway so looking is part of the fun. I had already hiked Sweeney Ridge and the Gaspar de Portola Expedition marker from Sneath Lane off of Skyline – it’s easier.

However I knew there was a trail coming in from the Pacific and it happened to be the exact route Father Crespi and the Gaspar de Portola Expedition had followed to find the San Francisco Bay on a crisp autumn day in 1769 when grizzly bears still roamed California and wetlands ringed the Bay . All in all, more fun.

I also knew that approach would be fairly steep (1,000 feet elevation gain over 2.4 miles) but the kids didn’t need to know that ahead of time. They would figure it out soon enough.

We finally found the entrance. From CA-1 going north from Rockaway Beach, we made a sharp right in the driveway of the Shelldance Orchid Nursery and found a big dirt lot at the top where we parked. Everybody disembarked and grabbed their backpacks.

The first slope set the tone – man that was steep! It was going to be all up until the ridge so I told the kids to pace themselves, which of course they didn’t. Why walk when you can run uphill? I mean really (rolling eyes). Crazy as it sounds it’s our pair of 6-year old girls who played a little running game while the 8-year old puffed behind.

I thought I was going to have time to chat with my friend on the trail but when the young explorers disappeared over the ridge and wouldn’t stop when we called them, I had no choice but to take off. What if they met the big bad wolf? I scolded them sternly but thanks to them, reached the top much faster than I anticipated so that was good.

I caught up with them on Sweeney Ridge Trail and seconds later, we stumbled upon the Nike missile site #SF-51C. As they wanted to spook out their older siblings, I suggested they hide behind me on the cement top of a former tank – a request I didn’t need to repeat. Not-so-stealthily they lied down and waited. “Booh!” they went. A commendable try  but they were all too visible to allow any element of surprise.

Once our group was re-united, we started exploring our discovery with stupendous views both on the Bay and the ocean.

Now, when you look at dilapidated buildings you don’t immediately think “nuclear warheads.” Right? Maybe you think “junkie hideout” or “creepy shelter” but nothing too Dr. Strangelove. However the signs on the use of Nike Missile Site SF-51 quickly put things into perspective and then you reconsider the views on the Pacific Ocean. Short range, long range – views with a definite military advantage.

As a matter of fact, Nike Site SF-51 included a control station and was only 2 miles away from a missile launching site at nearby Milagra Ridge (that’s if you want a side trip). First I thought the buildings were entirely boarded off but then we realized some doors were open. The kids went in first and we heard “wow!”

Besides the roofs ripped open and the walls sprayed with colorful graffiti, the buildings have a mad scientist feel to them with dangling wires, big fuse boxes and metal chutes.

We had to refrain the kids from crawling under more wall openings than necessary and stopped them before they tried sliding down a rusty metal pipe. I can’t really blame them, the place is fun. Discarded glow sticks told silent stories of night excursions and I actually thought it would be a cool thing to do – later.

I looked at my watch and thought we must go on with our hike if we wanted to make it back to the car before dark. Not that hiking in the dark isn’t a good idea, but we only had 2 flashlights for 6 and the way down would be steep and slippery.

Glad that we found a surprise “treasure” on the trail, we continued south on Sweeney Ridge Trail and walked another half-mile until the Portola Discovery Site. Since we were following a “flattish” ridge, that was swiftly done and we found the marker right after the restrooms (junction with Sneath Lane Trail) over the hill.

As far as markers go, this one could be more grandiose. It is after all, the marker for the discovery of the San Francisco Bay on foot by a European expedition. Without Gaspar de Portola, the bay would have remained hidden from the western world for a few more years.

On the hill, the marker is a simple stone with a text engraved that says “From this ridge the Portola Expedition discovered the San Francisco Bay. November 4, 1769.” A bit dry don’t you think? Though a stone is a step up from the plaque, an orientation table with major peaks and waypoints would have been nice and a more detailed text as well. If there is an NPS sign, I must have missed it.

After a snack of ginger snaps, Fat Witch brownies and apples, we retraced our steps and hiked back to the car. This time it’s the 8-year olds who darted off like bees and left the 6-year olds in the dirt. Again we moms separated and I tagged along with the junior crew.

Both were trying to be quiet to see bunnies emerging from bushes at twilight but 6-year olds have a hard time staying quiet so they opted to run down the hills instead. I couldn’t help but burst out laughing when I noticed they were both holding their pants – because they were falling down!

By the time we made it back, a characteristic ocean fog had rolled in and shrouded the hills in a glorious late afternoon mist. The kids were surprised when I tallied up the mileage: 4.8 miles! That was quite a performance given they hadn’t been ready for a long steep hike. Guess the surprise worked to our advantage!