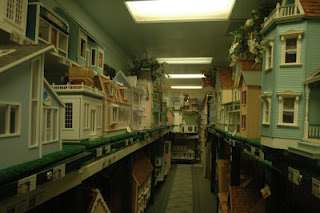 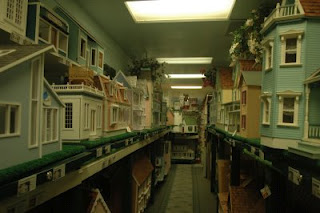 Which is what we did on Saturday, ditching our plans to attend the Golden Gate Renaisssance Faire, assuming it was as foggy in the Golden Gate Park as we were in the upper Peninsula. So we drove past the Golden Gate Bridge, beyond the Marin Civic Center in San 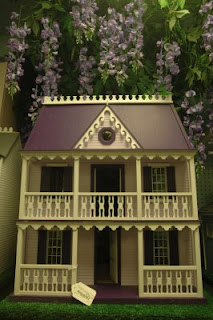 There I parked at Dollhouses, Trains & More, a one-of-a-kind store where I hoped Santa Claus could find a muse in the dollhouse department. What a place!

I didn’t quite expect to find two full “streets” of miniature Victorians wall to wall, with prices matching the quality of detail and facade gingerbread.

From nursery pink 2-BR units to McMansions, nouveau riche log cabins to fancy lighthouses, the dollhouses were incredible and much nicer than what I expected.

I even found one I liked and the staff was very cooperative in moving it to the register without my girls noticing. By the time I’d shopped for all the furniture, I had second thoughts.

What if it was too small for two children? How could I wire it with lights? That, dear shopper, is mostly done before wall paper and floorings are glued on. Sigh.

Back to the drawing board. It dawned on me that I needed to come back … without my girls.

After two hours in the store including thirty minutes switching all the buttons of the Halloween village (on all year, as is the 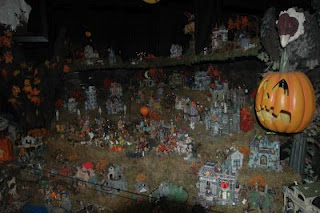 Christmas village), they were starting to run around wildly. I put things back into place and I made a mental note for later: wires first, wall paper second, heaven last.

However we didn’t quite return to the fog right away. To make the most out of our trip across the bridge, we met our friends Heather and Jason with their children Lily and Gus at the beach of China Camp State Park.

I love China Camp. This park is right on the bay, always sunny and never 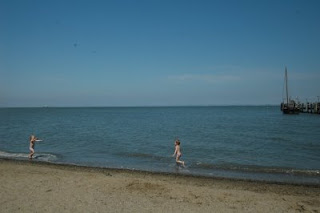 crowded. On Sundays, you can stop at the Marin Farmers’ Market before (at the Marin Civic Center), pack a roasted chicken, heirloom cherry tomatoes and pluots, and come enjoy the view at the historic Chinese fishermen’s village.

Two years ago we organized our one year old’s birthday party at China Camp and it was a big success. It was mid-June. San Francisco was fogged in, China Camp was not. What to say?

Last weekend, the girls forgot all about fancy dollhouses and got down to basics on the beach: running and collecting shells. Why do I always forget about free play?