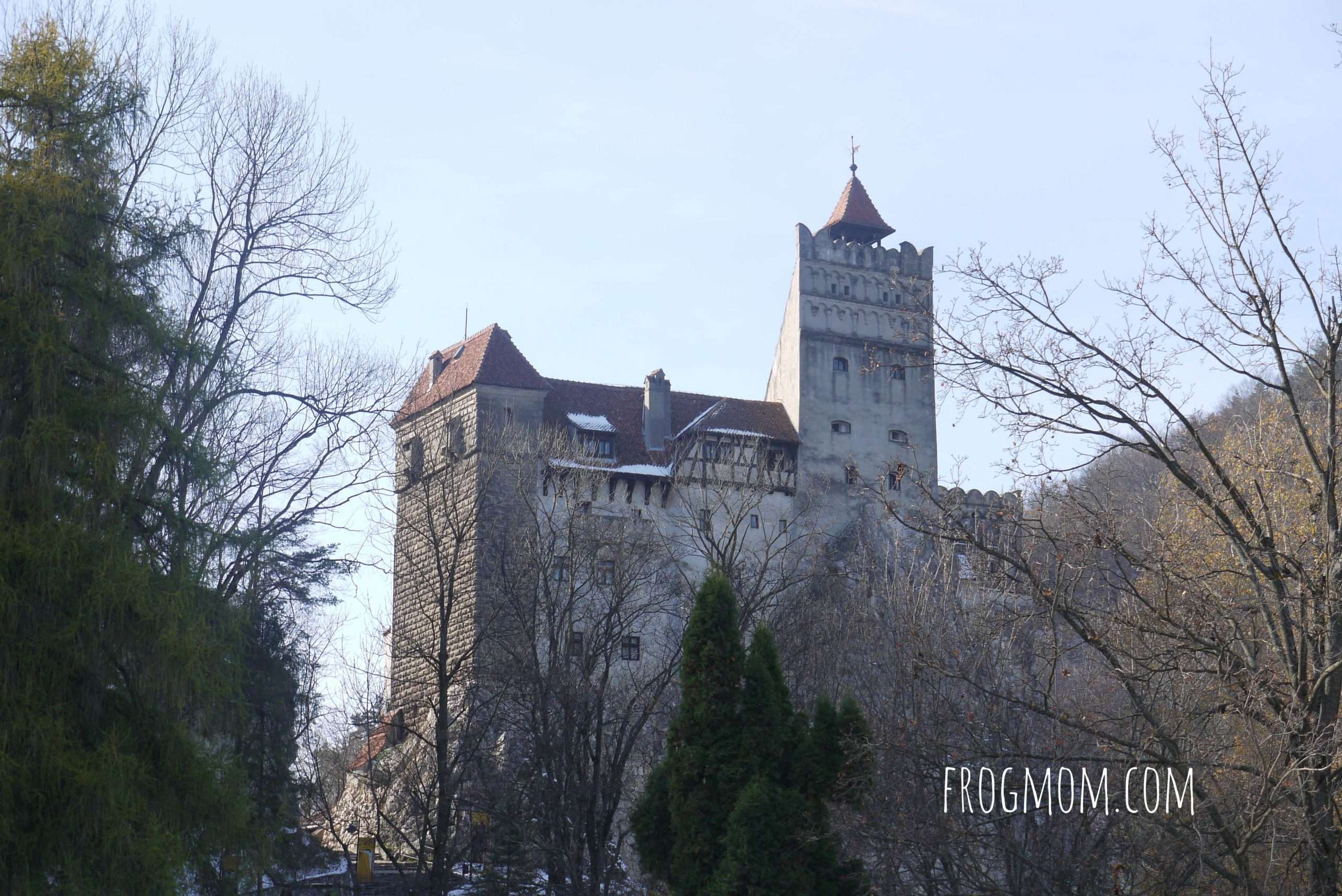 > On the Footsteps of Dracula in Transylvania

On the Footsteps of Dracula in Transylvania

Around Halloween, the sight of fake Dracula victims wouldn’t be out of place in leafy American suburbs but when said fake victims are on top of a mountain in the ruins of a medieval castle, this can only mean one thing. You are in Transylvania. Part of Romania, Transylvania is known as the homeland of Dracula, a mountainous region where Vlad the Impaler has been dead since 1477. His memory, however, is very much alive thanks to Hollywood movies that regularly keep the myth alive. Ironically, the economics of Dracula tourism haven’t escaped locals either. If you want to stay at Dracula’s campground or eat at Dracula’s kitchen, you can. There’s probably a Dracula tour of Transylvania by horse and cart – a favorite means of transportation in Romania. 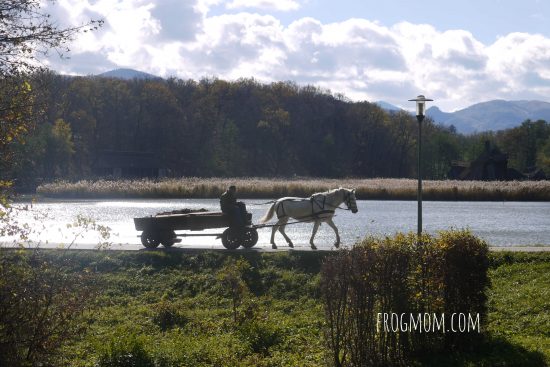 In November 2017, we traveled to Romania with our girls and in Transylvania, followed the footsteps of Vlad the Impaler aka Dracula. Castle after castle, we wanted to untangle truth from myth. While we didn’t find any vampires (much to my girls’ relief), we discovered gorgeous mountains and Transylvania’s troubled history.

Of the many places claiming a link to Vlad the Impaler, Poienari’s Fortress actually deserves it. Perched high on top of a cliff overlooking narrow mountain valleys, the fortress was lived in by Vlad and his first wife. Technically, this castle is in Wallachia but we were on our way to Transylvania from Bucharest airport so I’m including it here. We knew that we would find the castle at the end of 1480 steps and were a bit scared by that prospect, but the walk was much easier than expected. We parked opposite Dracula Camping (honestly, who would consider staying overnight at a place with such grim history?) and paid our dues to a lady in the gift shop. For a minimal sum, we were also allowed to use the camping’s restrooms, the only facilities in that area.

Up the stairs we went, encountering school groups of middle-graders and highschoolers along the way. All of them were having a ball, chasing each other and advancing in cliques. It was odd seeing kids having fun in such a grim place (Dracula’s Castle, I mean, that should give the heebie jeebies to anyone) but then, I realised that this was their history. Of course, they were going to visit Poienari’s Fortress. If they were studying the Middle Ages, this would be a perfect field trip with their school. 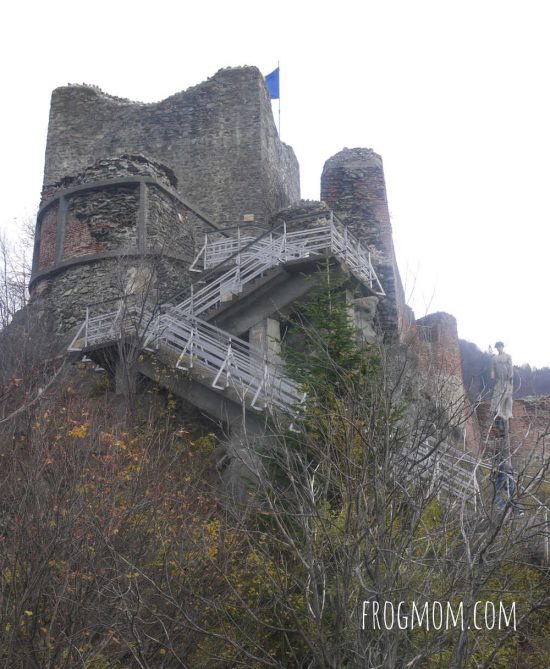 Towards the top, views on the surrounding Făgăraș Mountains were incredible. Near vertical limestone ridges, mixed alpine forests, steep drops – if only we didn’t have so little time in Romania, this looked like incredible hiking terrain. The valleys were sporting patches of fall colors where beech trees thrived and dark winter colors where spruce and firs had taken root. The combination was perfect. 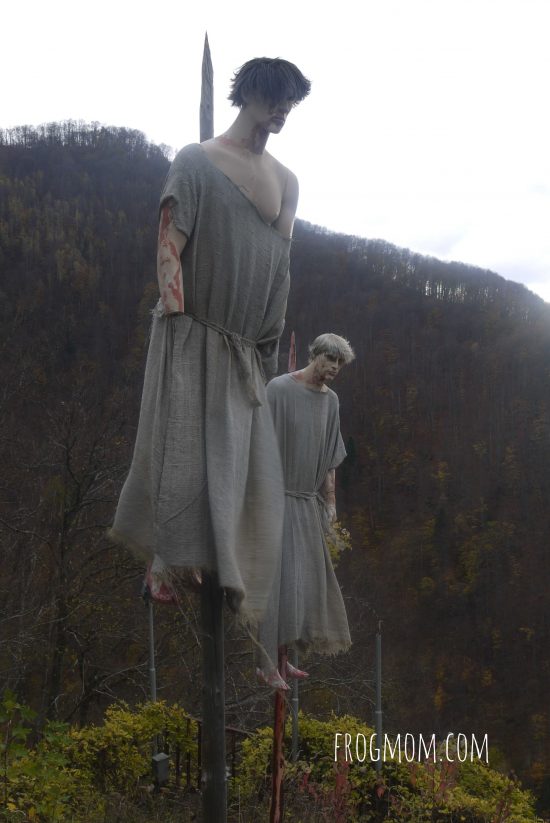 Now, the painted plaster victims empaled on plaster sticks – was that necessary? I get that it’s Dracula’s Castle and some staging can be fun but truth be told, it’s spooky as hell. Also, the fact that the plaster figures show signs of weathering, with broken plaster parts exposing rusty wires, makes it even worse. Grim legends surrounding the construction and Vlad’s first wife flinging herself from the highest tower definitely add to the somber mood (you can read them here in their graphic details).

Fortunately in reality, the fortress is a great example of a defensive castle with all the right features – splendid top location, thick stone walls, small castle size and steep drops. The only thing that bugs me is the absence of water. I don’t recall any spring or well, which would have been an issue under siege.

After 30 minutes in the castle, we made our way down and drove up the road to see the spectacular dam holding Lacul Vidraru. As my girls were hungry, I got them steamed corn on the cob at a roadside shack. This was as far as we went as the Transfagaran Highway had closed the previous day. We turned around and drove on to Sibiu.

A fairytale town, Sibiu features a pedestrian old town crisscrossed by narrow stairs lined by exquisite painted houses whose roofs have eyes. In fact, the eyes are rooftop windows in the shape of eyelids and on Piata Mare (the large square), you definitely feel watched. We were lucky to stay in Sibiu (at a friend’s) during the first snow of the season and in the morning, the city looked straight out of a storybook. 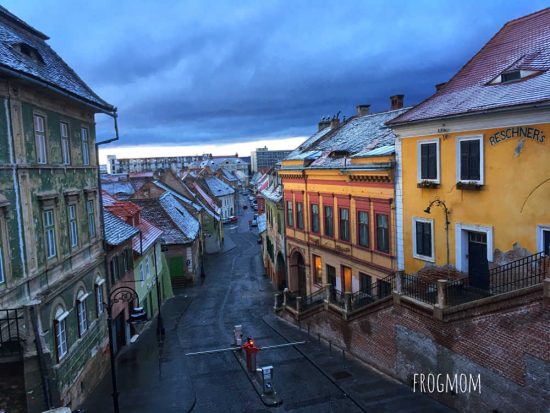 Now, where does Vlad the Impaler fit in Sibiu? Well, he lived in Sibiu shortly. He also attacked the city when they resisted him, a typical Vlad reaction as history tells us. Last but not least, his son is buried in the crypt of the Evangelical Cathedral. Known as Minhea the Bad, he must have taken after his dad in terms of fits and was stabbed to death upon leaving this cathedral in 1510. 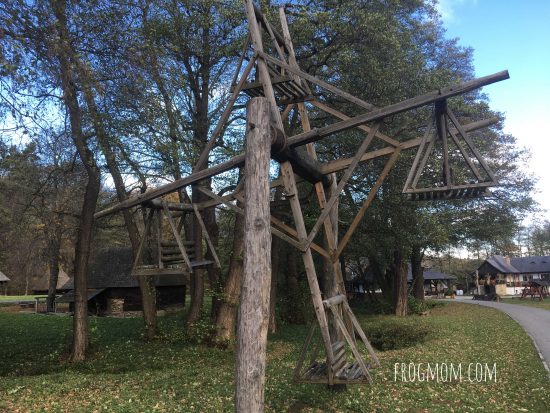 Beyond the city center, we visited Sibiu’s open air museum known as ASTRA, a collection of old folk houses spread over 96 ha (0.4 sq miles) in a forest. The giant man-powered fairground wheel was a huge hit with our girls, as well as the few furnished houses that we could get into. However, we were not impressed by the inn (the staff were getting ready for a group and clearly had other priorities) and the lack of living history activities. I can’t say anything about the ethnological museum as it was closed – that’s what happens when you visit during the off season.

Besides being a charming town that exudes Old World charm, Sibiu is also a foodie destination. We had excellent tea and cakes at Arhiva de Cafea Si Ceai, breakfast and coffee with rose petal jelly (a local tradition) at Stravagante caffe, superb dinner and Romanian wines at Weinkeller and discovered savory pasties filled with cheese or meat that made perfect quick lunches for our family in the city centre.

Ironically, Bran Castle is the castle that everybody identifies as Dracula’s castle in Transylvania but it has no real connection to Vlad the Impaler. So many tourist brochures and signs portray it as Dracula’s Castle that my girls were actually disappointed that “there were no vampires in this castle and it looks too inviting.” As if we had seen legions of blood-thirsty vampires elsewhere. If you’re looking for actual Vlad places, Bran Castle is a tourist trap. 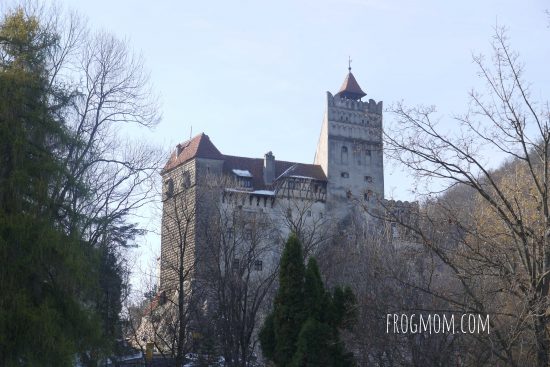 What it lacks in vampiredness, it totally makes up in good looks. It is a stunning medieval castle, it is big and it has been lovingly restored by the owners. It’s also decorated in 1920s style, so if you’re looking for medieval spikes and chairs, forget it. The central heating is very good. However with a backdrop of mountains and forests, it’s easy to see why Bran Castle has become the poster-child of Dracula tourism in Transylvania.

On the day we visited, it wasn’t very crowded but given the spiral staircases, small towers and attic nooks, it could be difficult to navigate. Unsurprisingly, summer is the worst.

This city on the UNESCO World Heritage list is the birthplace of Vlad the Impaler. Looking down on the modern city, the old fortified city is where the Dracula action is at. 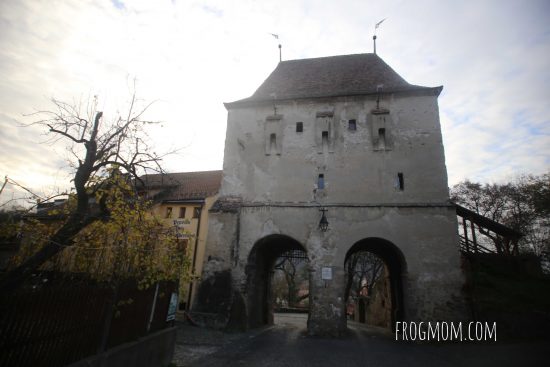 We parked at the bottom of the ramparts (free street parking) and climbed up a fight of stairs and steep cobbled streets to the Shoemaker Tower gate leading into the inner old city. In the middle of the week, the city was pretty much empty but for a few tourists like us checking their guidebooks.

Next to the imposing Clock Tower, we found the three-storey house where Vlad the Impaler was born. The ground level of the house is a tacky restaurant with an even tackier menu decorated with fake spilled blood effects. Thank you, but no thank you. 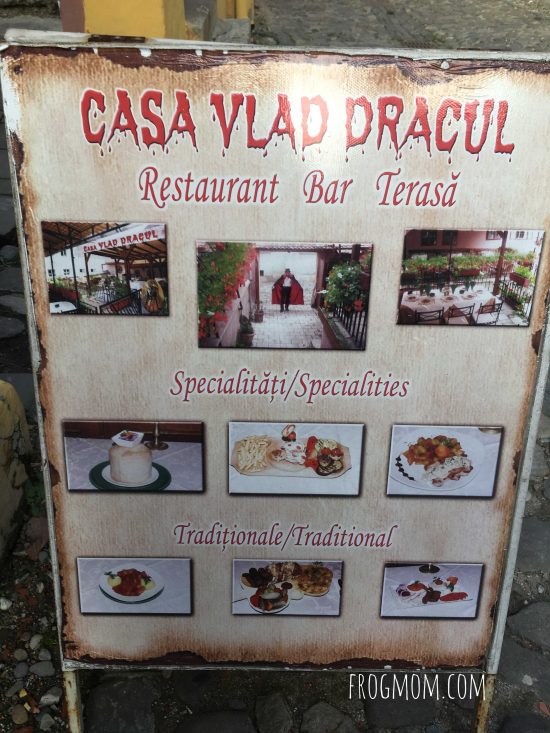 Our favorite part of Sighisoara was walking up to the Church on the Hill and the Scholars’ Stairs, a a steep covered wooden staircase (think covered bridge, only in stairs) dating all the way to 1642. Students used to use these stairs, sheltered from harsh winter conditions, to reach the School on the Hill (Bergschule). Fun fact, this school is still in operation. We continued walking from citadel to citadel, passing quaint houses and gardens along the way.

Sighisoara was not the last place where we found Dracula along our tour of Transylvania and I am sure that we could have dug some more but let’s face it, Dracula was not the reason we came to Transylvania in the first place. We came for the Carpathian mountains, for historical cities and for the rural way of life. That, we found and it was the best part of the trip.

Thanks: Special thanks to Dana, who inspired me to come to Transylvania, who hosted my family and who connected us with her friends so we could see her country as locals do. Or almost (we don’t speak Romanian).