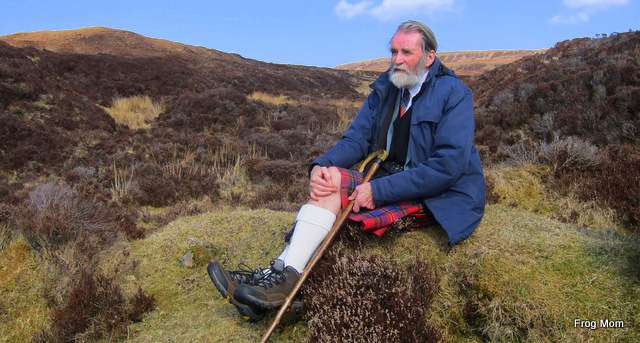 > Once Upon A Time with a Scottish Storyteller

Once Upon A Time with a Scottish Storyteller

Meeting a skilled storyteller should be a must for travelling families who are eager to add another dimension to their experiences and make sense of the place in a different light. My girls being suckers for good stories, I organized our trip on Skye so we would spend a day with the man behind the Isle of Skye’s Storytelling Festival, George Macpherson. My husband was expecting a new-agey hippie in sandals – we found an old bard closer in beard and in words to Gandalf or Merlin. That whole day became the highlight of our trip as it brought us insights we would have found nowhere else – and stories now ingrained in the memories of my girls.

Every inch the Highlander, George Macpherson looked quite the part when we met him at his house on a Friday morning.  Wearing his clan’s kilt and calf-high socks with a dirk dagger, the 79-year old Scottish storyteller invited us in for a cup of tea and some home-baked cakes. Impressed by the Scottish dress, my girls became very shy and sat still on the living room’s couch.

Once we agreed there would be no script to the day and the stories would be led by our interests, my father asked a question about old paths, land management and farmers. Macpherson replied by telling us the story of Glendale his village and how his great-grand-father John Macpherson led crofters into a revolt to take over the land they farmed from their landlord in the late 1800s.

Then he turned to my girls and announced a story “for the children,” the story of Ewen the best dancer on Skye who met little people coming back home from a ceilidh and was never the same again. Drawn into the story, my girls relaxed and sat up straight to listen.

Macpherson’s Highland voice was clear. He rolled his Rs and said wee for small. His delivery was well paced and he used pauses timely. In a few words, he was a real storyteller, the bearded bard who’d traveled around and could tell age-old stories in chosen words and in a low rhythmic voice.

Ewen the dancer was a first of several Celtic and folk stories that punctuated our day. After fairies, my 9-year old asked for witch stories. When you’re 9-year old, evil is cool. Obligingly, Macpherson launched into the chilling story of the Waternish witches and young cattle herder who witnessed a witches’ dance through the heather. That boy got surrounded by black cats and torn to pieces by the river.

“Is it true?” asked my 9-year old asked squirmily on the couch. “Ah, you want a true witch story? Then let me tell you about the witches of Paisley and the curse that became true two centuries after their death burning at the stake,” he continued. As you can guess, Macpherson had a story to answer any question we had. Realizing that my girls needed to run around, we got out of the house, drove to the limit of Glendale’s houses and walked out onto an open valley crossed by a river. We started walking and my girls took the bow and arrows they had made to run wild on the moor.

Several miles away, the MacLeod Tables dwarfed everything around them with their flat tops at 1,600 feet of altitude. Asked about them, Macpherson gave us the story of the Giants of Glendale who fought one drunken night with another race of giants and threw rocks off the top of two mountains far into the sea. Looking across the heather and the mountains, we liked the idea that the mountains we were looking at  had been leveled off by giants.

At that moment my 7-year old joined us and told us she and her sister were followed by a sheep. We turned back and indeed, a white fluffy sheep was playing friendly with them. Inspired, she asked for a sheep story to Macpherson who told her not one but two ungulate stories. Without noticing it, we had followed an ancestral cattle trail and reached the ruins of a croft house by a bend of the river. George’s uncle had lived there as a sheepherder in his youth. We looked at the four stone walls with wide eyes and wondered about that kind of life without electricity or modern comfort.

Just a little ways further, the ruins of the Shielings appeared. Had we not paid attention, they would have looked like a series of grassy domed mounds set beside a burn. “This was the summer village of women and children in the community,” said Macpherson, “It was last used in the early 1800s.” In front of us was in fact the remains of a small farming settlement where boys were welcomed until they turned 10 and became men, where girls learned the facts of life from the wise woman, where sheep was fattened up and cheese made for the winter. Here was a place of rituals and rites of passage. Reminded of his childhood on his grandmother’s farm, Macpherson shared with us the Saturday childhood chore he liked the least. “One of my jobs as a boy on Saturdays was to churn the butter. My grand-mother taught us Gaelic songs to go with the churning and we knew the stages according to the sound. When all was done, we were given a cup of fresh buttermilk.”

We entered the Shieling where the ghosts of crofters past were still very alive to our storyteller. Macpherson led us through “alleys” of soft moss, pointing here to the house of so-and-so, here to another big house abutting the hill, past a crystal-clear creek to a squarish mound that was the wise woman’s house. We all sat down on the “walls” for more stories. Listening to Macpherson, it was as though he’d lived the stories – which was true for some – or heard them from the person who first created them. And that, to a certain extent, was true as well. George Macpherson was taught the rigorous art of storytelling from the age of three onwards, at his grandfather’s knee. His grandfather learned them the same way, learning to repeat word for word an oral story heard from his father or grandfather.

The fact the stories have come so far with minimal distortion explains why they were so captivating. Good stories last! As the sun warmed the heath, moss and fern around us, we heard about the legend of the Seal People, the last grey wolf of Skye, and the ghost black car of Skye – the latter really got my 9-year old’s attention.

It was time to head back and Macpherson still had so many stories to tell. One last time we followed him down a ravine to the Waterfall of the Fairies. When you swim underwater, you find a cave under the waterfall. You have to swim through the cave to come out and make a wish. Framed by rowan, alder, honeysuckle and hazel, this magical waterfall was the last spot we haunted with Macpherson.

When asked where we could find his books, the old wise man replied “at the post office!” After saying our goodbyes, we headed straight to the post office. Unfortunately they were out of his books but they still had one of his CDs. That night as we were driving back from a delicious dinner at The Three Chimneys, we listened to three stories of The Swans on the Loch. It was just like listening to Macpherson except without the green open valleys. When we reached our B&B late at night, there were still 8 minutes to go until the end of a story. My girls pleaded for us to stay in the car until the story was over. We did.

I told you they are suckers for good stories.

If you’ve ever wondered  what it’s like to listen to a skilled storyteller, try to imagine this told by an old bard in Scottish dress: “This is a story about Katrina who, each evening, left a wee bit of milk and food for the little people in the fairy stone in front of her house and about how the harvest was done for her in one night.”

4 thoughts on “Once Upon A Time with a Scottish Storyteller”