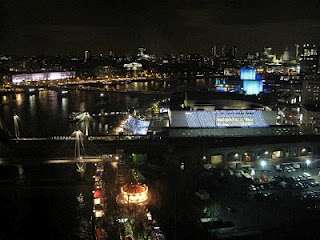 > One Night in London, Accidentally

One Night in London, Accidentally 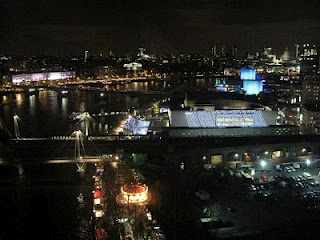 What do you do when in London for one night only? One night sounds ridiculous but we were stranded at Heathrow because of our horrible, epic and unbelievably long journey from San Francisco to Paris. Once checked in at a London Heathrow airport hotel, we needed some fresh air. Since all we had with us was our cabin luggage (books, toys, computer), some light shopping seemed de rigueur.
An hour later, we were in a cab in front of Harrods. At 4pm on a chilly December Saturday afternoon, Harrods is not for agoraphobics. The place was nuts! Shoppers left and right, families looking for the Christmas shop, visitors headed to Lady Di and Dodi’s memorial shrine at the bottom of the Egyptian escalators with red roses, ceilings loaded with themed holidays decorations. It was a total sensory experience.
Amidst that hustle, we made our way to the the upper levels. All we wanted was tea, scones and underwear. Tea and scones with clotted cream, we found at the Terrace Bar – note: in my opinion, Lovejoy’s Tearoom in San Francisco puts up a better tea & scones- and the rest we found easily. Easily yes, but as a total Harrods rookie, I was floored by how expensive things were. Say, the children’s clothing department. It’s either designer brands (mostly French and Italian) or formal wear – as in, upscale school uniforms or formal attire for functions. There is strictly no middle ground, as at Parisian big department stores. We settled quickly and headed for the London Eye. 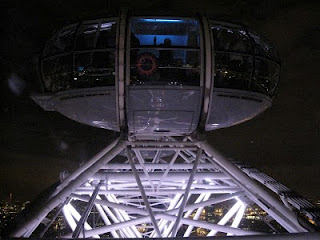 If we only had one night in London, we wanted to show the city to our girls. Where else than the biggest local tourist trap, from a bird’s eye view? Rising 135 meters (442 feet)  above the ground, the London Eye is the world’s largest cantilever observation wheel. A sort of monste-size fair wheel. Each oval-shaped glass-walled capsule takes 30 minutes to revolve completely around the axis, taking two dozen visitors on an aerial trip above the Thames. 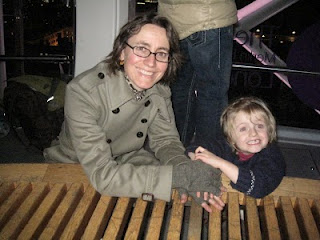 For people afraid of heights – like me – the woodwork on the central bench is nothing world-class but you can’t see completely through it and that’s more than you can say of the 360 degree scene around you.

For others, the city at night was an incredible sight to behold. Pointing to the Tower Bridge, St Paul’s cathedral or Big Ben over the Palace of Westminster, to the OXO Tower and the Millenium Bridge, my husband was ecstatic and loud. On a sugar high, my girls were playing monkey bars on the side railings. Finally, Peter Pan’s flight over London came to an end. Again, I needed fresh air. 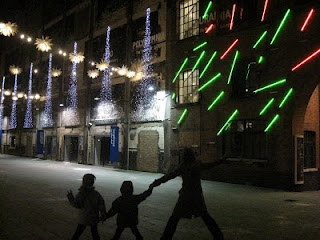 After the “flight” (that’s how they call it), we decided to walk down the South Bank to Shakespeare’s Globe Theatre, so we’d be able to see a few London landmarks before hitting the Heathrow airport hotels. Walking along the Thames is a real pleasure as you can follow the Thames Path, a pedestrian path that’s not only clearly signed but literally crosses the city from West and East – and conversely – with large paved pathways. The river-side cityscape is an eclectic mix of delightfully traditional Ye Olde English Pubs and loud modern installations, this one with multi-colored neon lights. It’s absolutely fascinating. 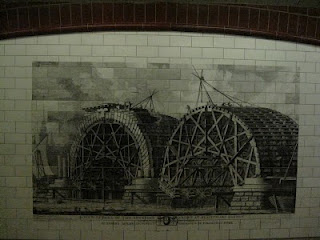 As we passed the Christmas market at the foot of the London Eye, we admired the bright golden globes of the carousel spinning next to the pretty wooden huts as the crisp air filled with sausage smells mixed with vapors from German mulled wine. Here and there, hard frozen puddles shone like steel mirrors. The night was cold but not windy.
We kept going. One of the tunnels was walled side-to-side with tiled black and white renderings of the old London, its bridges and 19th century city life. Soon we reached the outskirts of the Tate Modern and the Millenium Bridge. 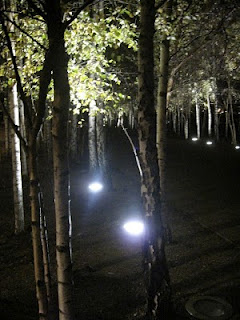 Late at night the doors were closed but just being there and admiring the building was something. Between the Thames and the former power station, eerie rows of birch trees lit with white spots in the ground framed the green lawn on the plaza.  It felt fitting for the place.
The landscape architecture of the Tate Modern waterfront was a perfect link between the heavily industrial past of the site and a realistic reminder of the lack of green spaces in that area. It was a place to play tag, a place to reflect, a place where trees act like sculptures out of their element. 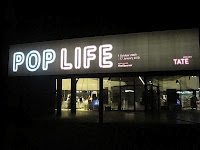 Had we known then that we were to spend another 24 hours in London due to snow storms on the continent, we would have come back the next day to explore the current exhibits. Instead, we meandered  between the trees, stared at the red neon scriptures in one of the display windows, absorbed the size of the building and left. All of a sudden I felt starved for museums. 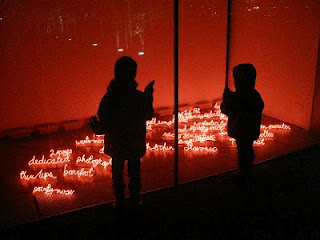 Soon we would need to leave to feed the troops and I absolutely wanted to get to Shakespeare’s Globe Theater. I was dead set on that. I wintered in London once in my former life as a tax attorney and my favorite haunts were in the East End, around St Katherine’s Dock, Hackney’s markets and along the Bankside. For some reason, Shakespeare’s theater epitomized the old and the new.
This thatched building is a mid 1990s reconstruction of the 1599 Elizabethan playhouse where Shakespeare’s plays were performed and where he acted himself.
Interestingly enough, the current Globe was founded by Sam Wanamaker, an American actor and director who was disappointed not to find a lasting memorial to Shakespeare and his theater in London. Nowadays, the theatre is a performance venue as much as a giant classroom on Shakespeare and his legacy. 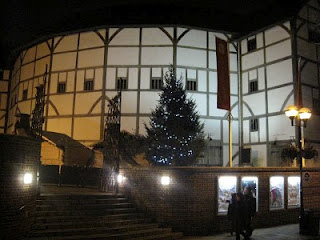 Here was the theater finally. We decided to make it back to the hotel. Wandering through back alleyways and streets, we were on the lookout for a taxi but we were obviously away from major arteries. The girls started complaining. They were cold and tired.
Only the thought of a “funny taxi” with opposing stools and seats comforted them. They were eager to get on the stools and look at the city lights. Four hours in London. It had been short but nice. Now I wanted to come back for a proper visit.