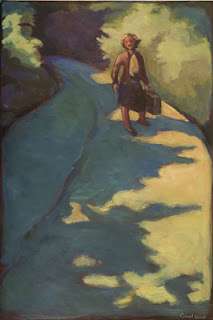 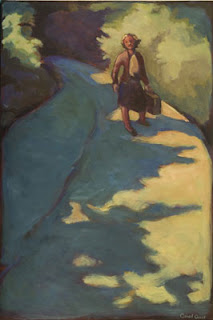 can’t afford Warhol? Neither can I. That’s what open studios are for: checking out local artists at farmers market prices. Out of 200 tortured souls and starving full-time or recreational perpetrators, there’s got to be one for you. Say, this “Shadows on road” by Carol Aust. Who knows? You might go home with a big canvas wrapped in butcher paper in the back of the car. Or a funky crafty something that does not even have a name.

Open Studios are fun. The problem – if you like them – is: they’re quite confidential. Open studio season is a little bit like high school musical season. It comes in the spring and in the fall and it lasts only one weekend with very little publicity so that by the time you realize it happened, it’s all over. Bummer. Unless … said the Lorax, unless you have a good friend who’s part of the exhibiting community and reminds you of your friendly duties. That was our case. 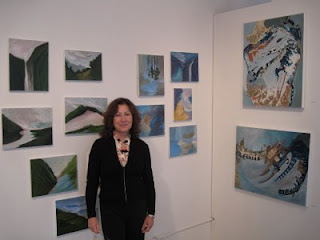 s up their studios with the Marin Arts Council Open Studios. At Hunters Point, we went directly to Building 117 studio 3216.

That’s where Teresa Seran, New York city transplant turned San Francisco-based mixed media painter, practices her art. Standing in front of her latest series, she explained to me how a whirlwind of regular and metallic paints lived their own life on acetate-covered canvases. Teresa is a conceptual artist and gets much of her inspiration from roaming the Tus 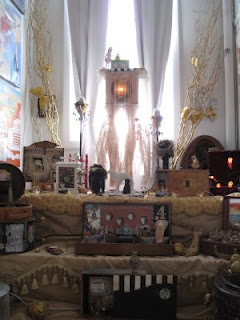 can or Californian hills.

I’d never seen her studio before so that was enlightening and my girls loved picking their “favorites” describing what the paintings actually represented. That’s the beauty of abstract art. It felt just like an art gallery on a smaller scale.

Other studios were very different. In fact, they were each their own different microcosm. Take Deborah Hayner, one of the most intriguing of the lot. Entering her studio felt like walking through a Macau Portuguese chapel except the priest has gone bezerk and lights up old dollies next to votives and old photographs.

As much as a lot of what we saw was deeply conventional, Hayner’s art definitely stood out because it was fun and unconventional. Go check out her website’s installations page, it’s well worth the click. Very Joseph Cornell-ish.

Her object “Sweet Talk” is a metallic carousel of glass plates printed with red lips and out of each pair of lips comes out a bug. Talk about weird. She also has a weakness for Hunter Thompson (see typewriter at the bottom). I would have liked to see more of that type of funky thinking than pretty flowers in pots or trees on skyline backdrops. 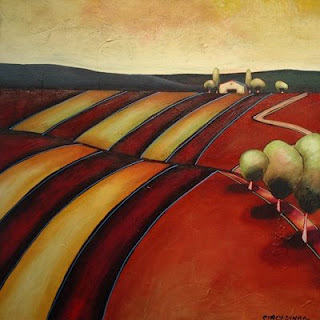 ng hallways of Building 101, we noticed a definite trend of some very gifted artists to varnish their paintings to make them look glossy. Stacy Dynan was one of them. Her whimsical style is particularly interesting.

She describes herself as “exploring the dynamic interplay between transparent and opaque elements, often applying her colors in dozens of layers to achieve the particular depth and radiance she desires.” True, her paintings did have a silky depth and looked like they were springing out of the canvas.

Because it’s my pet peeve, I think she’d make a wonderful children’s book illustrator. Or would she? I asked that same question to Carol Aust featured above. Had she considered illustrating books for children? As a matter of fact, she had. However “publishing houses don’t like to work with f 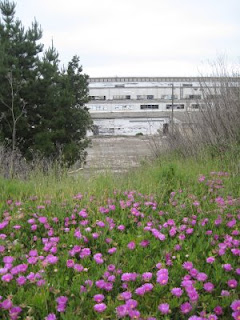 ine art artists,” she told me. “They require too many changes that we are reluctant to make.” I see how that could be a problem. The egg and the hen, the text and the illustration. Yes.

In a completely different category was Jenny Robinson, a Borneo-born UK transplant now living in San Francisco. She makes gigantic prints featuring derelict and mundane industrial or city structures. I find her prints absolutely fascinating. In her studio there was also a sort of super-rollercoaster that would have made a great set for Dark City. I wonder if her enlarged or projected scenes would be good backdrops for modern ballets. Probably would.

By the way, Ms. Robinson is a very tech-savvy person or knows one – I was not able to copy a work 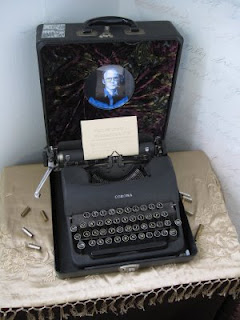 of art to illustrate my blog. However, go on her website and check out her industrial, bridges or landmarks series. What a trip; especiallly – and I’m not saying that in a derogatory way – if you are a sucker for graphic novels. Her work’s out there.

Now, next time you see there’s an open studio event in your neighborhood, don’t be shy. Go through that doorstep. Artists are nice people. They don’t bite. They’re not necessarily trying to sell you their art. They want to show it to you. The rest is up to you.

7 thoughts on “Open Studios: Hunters’ Point Shipyard Artists and beyond”