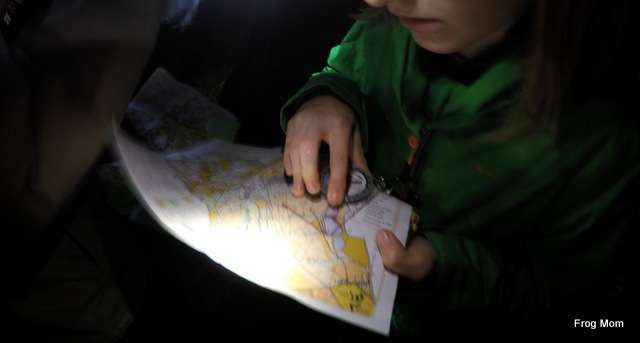 > Orienteering At Night With Kids: Tips and Tricks

Orienteering At Night With Kids: Tips and Tricks 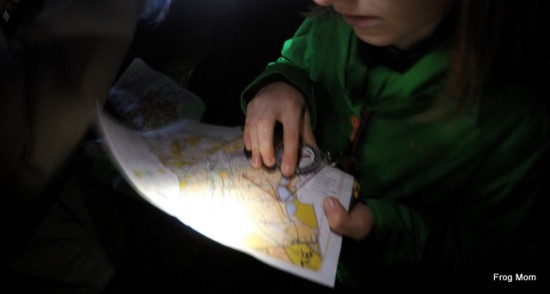 Hampstead Heath is a large open space north of London, a wonderful place with trees and ponds where Londoners walk, swim, run or just enjoy the views over the city. A few weeks ago, I took my 9-year old on a nighttime adventure in Hampstead Heath: orienteering! Even though it was on a school night, she was so intrigued by the idea that she heartily agreed to join me at dinner-time. The idea was simple: meet a group of people, receive a map, listen to instructions, use a compass and find check points in the forest. A treasure hunt of sorts, if you can navigate at night! It was great fun and I would recommend it for any kids who like unusual outdoor adventures at night.

Of course, it’s not so easy (it wouldn’t be an adventure otherwise) but with a few pointers, you too can succeed.

Finding your way in the dark with only a map and a compass is tricky business. It involves keeping a direction without seeing landscape features, being able to avoid roots, puddles and logs, and estimating distances without daytime referentials. It sounds like a lot of guesswork but it’s not. There’s a way to set all this madness right and once you master night orienteering, it’s a skill for life in the great outdoors.

When we arrived at the meeting point, the Parliament Hill Lido, the group leader asked us to walk the length of the building and count our steps. The building being 100 m long, it would give us a standard for every 100 m on the map. This picture will help you visualize. 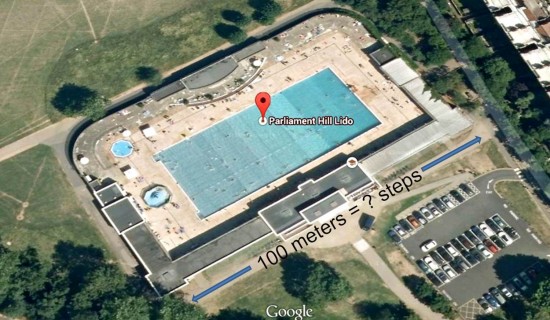 For any orienteering drills, it’s good to be able to calculate distances without a GPS. You never know when the connection will go poof! To repeat the same exercise, simply find a local building whose length you know and walk its length to calculate your own standard. Multiply and divide if you must, but find a ratio that works for your needs. It might not be 100 m. It could be 100 yards or 1/8 mile. Just find out an easy distance that you can “recycle” in your outdoors adventures. I came up with 65 steps and my daughter around 82 for 100 meters..

The map that we received was an orienteering map of Hampstead Heath. It showed lakes, ponds and streams, contour lines, geocaches, wooded and open areas, bridges and roads, fences, dirt walls and hedges, footpaths and parking lots, buildings and gullies, etc.

When you look at a map, always have the North arrow at the top and study the details. Read your map’s legend and check that you can correlate the legend with natural and man-made features on the map. It’s important to visualize on the ground what you have on paper.

Learn How to use the compass

This is the type of compass that I used. It’s also called a compass baseplate. 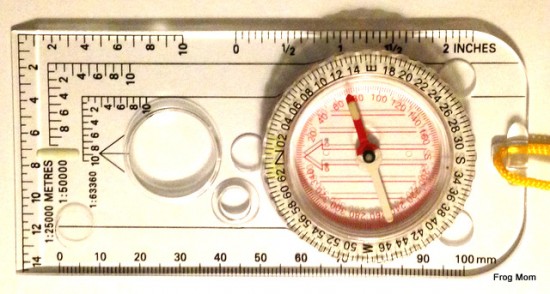 John, our group leader, explained the sequence as follows. First, you line up the sides of the compass baseplate so that it goes through A your starting point and B your end point. Now, rotate the compass internal red lines so that they are parallel to the orienteering black lines on the map. Just so. 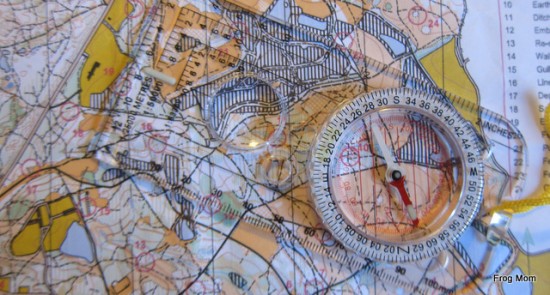 To find the direction you have to go, move your body so that the north needle lines up with the red arrow inside the compass housing. The black arrow/white line points in the direction that you have to follow to reach B. To know how far to go, count your steps every 100 meters. Sounds complicated but it’s not. My 9-year old got it in one evening and remembers it to a T!

Go for a field test

After the instructions, it was time for a field test! John gave us a list of geocaches we’d need to find in the dark with our group–geocaches number 1, 3, 8, 16, 15 and 13. Since we had a man named Carlos in our group who looked like he knew what he was doing, he took the first turn at finding the direction and counting his steps. I was grateful for that as we were able to follow and observe his technique before doing it ourselves. Crossing a grassy meadow, we headed right to a cluster of trees and switched on our headlamps to find the geocache. In order to keep track of my little girl, I had attached a green battery-operated glowstick to her jacket and saw her green beam follow the direction in the night. Shortly after, I heard “Found it!” Sure enough, there it was. 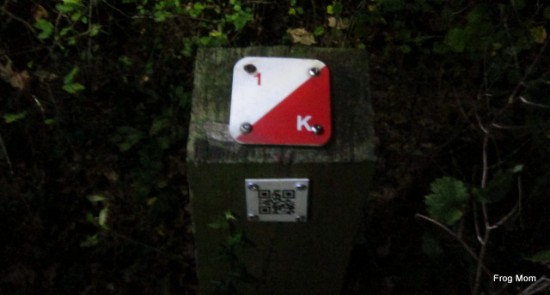 See?It says 1 at the top left corner and there’s a QR code that you can scan to clock in on a geocaching wetbsite. One down, five more to go. We each took turns finding the direction on the map, calculating the distance and following the direction while counting our steps. Though she was shy at first, my 9-year old volunteered to take the 4th turn and did great! She held the compass and the map in front of her, counted steps in her head. Oh, how she beamed when she reached the footpath next to where the geocache should be on the map. Give or take 10 meters (30 feet), she had gotten it right. This is where she led us in the night. 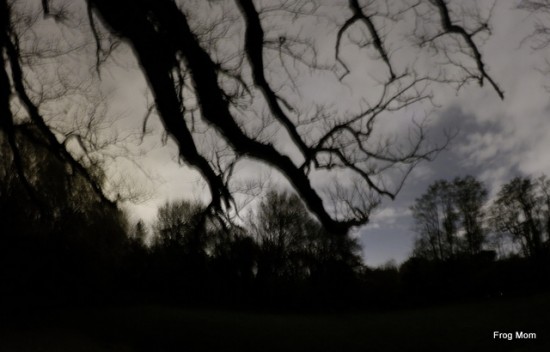 City lights outside the open space gave a distant glow to the trees. As we were doing a good time compared to the other groups, Carlos suggested that we all switch off our headlamps to try on night-vision binoculars that he had brought in his bag. “I didn’t how hardcore the event would be and I just threw this in my bag,” he explained. They were Russian army stock, the type of binoculars you only see in spy movies. So exciting! It was really cool of him to share his binoculars as I know that those are really expensive, even on the second-hand market.

This is the type of image that we saw, minus the soldiers. 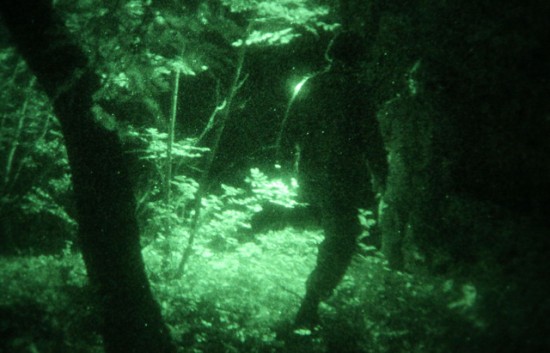 It was all green and as if in broad daylight. I was impressed by the level of detail we could see, the trees, the grass, and people that we wouldn’t be able to see otherwise. There was even an infrared setting. How really neat!

Feeling somewhat extremely lucky to have landed in a group with night-vision binoculars, we kept on our search for the remaining geocaches. Some were not easy to find at all. Rather than stuck on visible posts, they were placed on wooden fences and in one case, on a particularly elusive post for which we had a really hard time estimating distances. Nonetheless, we found them all in just about three hours.

At the end of the event, Carlos shared his night-vision binoculars with everybody and it became the hottest gadget in the heath! Everybody was very impressed and as far as I can tell, everybody had also learned to use and understand night orienteering skills. Fun, educational and friendly–check on every point!

As it was already past 9pm, I then took my little girl home on the next train and we realized with a sigh of relief that it was the last train home. What an adventure, though. At breakfast the next day, she raved about the event to her big sister. Alone at night in the forest! Night vision binoculars! Finding your way in the dark! What was not to love?

We’re now waiting for the right time to do this with both girls and winter sounds to me like the best time of the year because dark is so early in the day. Let’s hear it for John and his orienteering at night event!